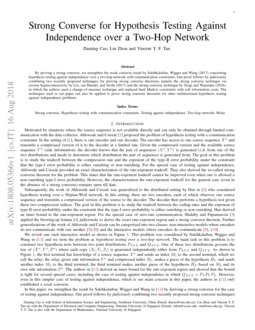 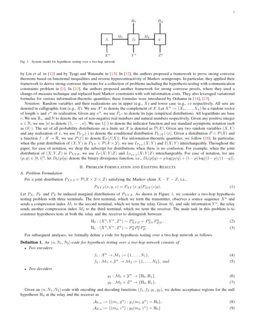 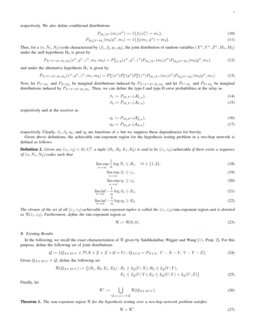 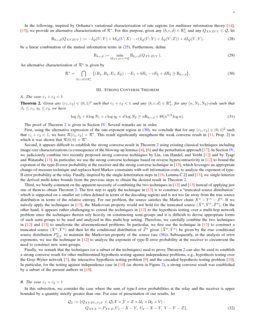 Strong Converse for Hypothesis Testing Against Independence Over A Noisy Channel

We revisit the hypothesis testing problem against independence over a no...
Daming Cao, et al. ∙

The main contribution of this paper is a strong converse result for K-ho...
Mustapha Hamad, et al. ∙

Strong Converse for Testing Against Independence over a Noisy channel

Tail behavior of dependent V-statistics and its applications

Motivated by situations where the source sequence is not available directly and can only be obtained through limited communication with the data collector, Ahlswede and Csiszár [1] proposed the problem of hypothesis testing with a communication constraint. In the setting of [1], there is one encoder and one decoder. The encoder has access to one source sequence Xn and transmits a compressed version of it to the decoder at a limited rate. Given the compressed version and the available source sequence Yn (side information), the decoder knows that the pair of sequences (Xn,Yn)

is generated i.i.d. from one of the two distributions and needs to determine which distribution the pair of sequences is generated from. The goal in this problem is to study the tradeoff between the compression rate and the exponent of the type-II error probability under the constraint that the type-I error probability is either vanishing or non-vanishing. For the special case of testing against independence, Ahlswede and Csiszár provided an exact characterization of the rate-exponent tradeoff. They also derived the so-called strong converse theorem for the problem. This states that the rate-exponent tradeoff cannot be improved even when one is allowed a non-vanishing type-I error probability. However, the characterization the rate-exponent tradeoff for the general case (even in the absence of a strong converse) remains open till date.

Subsequently, the work of Ahlswede and Csiszár was generalized to the distributed setting by Han in [2] who considered hypothesis testing over a Slepian-Wolf network. In this setting, there are two encoders, each of which observes one source sequence and transmits a compressed version of the source to the decoder. The decoder then performs a hypothesis test given these two compression indices. The goal in this problem is to study the tradeoff between the coding rates and the exponent of type-II error probability, under the constraint that the type-I error probability is either vanishing or non-vanishing. Han derived an inner bound to the rate-exponent region. For the special case of zero-rate communication, Shalaby and Papamarcou [3] applied the blowing-up lemma [4] judiciously to derive the exact rate-exponent region and a strong converse theorem. Further generalizations of the work of Ahlswede and Csiszár can be categorized into two classes: non-interactive models where encoders do not communicate with one another [5, 6, 7, 8] and the interactive models where encoders do communicate [9, 10].

We revisit one such interactive model as shown in Figure 1. This problem was considered by Salehkalaibar, Wigger and Wang in [11] and we term the problem as hypothesis testing over a two-hop network

. The main task in this problem is to construct two hypothesis tests between two joint distributions

PXYZ and QXYZ. One of these two distributions governs the law of (Xn,Yn,Zn) where each copy (Xi,Yi,Zi) is generated independently either from PXYZ and QXYZ. As shown in Figure 1, the first terminal has knowledge of a source sequence Xn and sends an index M1 to the second terminal, which we call the relay; the relay, given side information Yn and compressed index M1, makes a guess of the hypothesis ^HY and sends another index M2 to the third terminal; the third terminal makes another guess of the hypothesis ^HZ based on M2 and its own side information Zn. The authors in [11] derived an inner bound for the rate-exponent region and showed that the bound is tight for several special cases, including the case of testing against independence in which QXYZ=PXPYPZ. However, even in this simpler case of testing against independence, which is our main concern in this paper, the authors in [11] only established a weak converse.

In this paper, we strengthen the result by Salehkalaibar, Wigger and Wang in [11] by deriving a strong converse for the case of testing against independence. Our proof follows by judiciously combining two recently proposed strong converse techniques by Liu et al. in [12] and by Tyagi and Watanabe in [13]. In [12], the authors proposed a framework to prove strong converse theorems based on functional inequalities and reverse hypercontractivity of Markov semigroups. In particular, they applied their framework to derive strong converse theorems for a collection of problems including the hypothesis testing with communication constraints problem in [1]. In [13], the authors proposed another framework for strong converse proofs, where they used a change-of-measure technique and replaced hard Markov constraints with soft information costs. They also leveraged variational formulas for various information-theoretic quantities; these formulas were introduced by Oohama in [14, 15].

Random variables and their realizations are in upper (e.g., X) and lower case (e.g., x) respectively. All sets are denoted in calligraphic font (e.g., X). We use Xc to denote the complement of X. Let Xn:=(X1,…,Xn)

be a random vector of length

n and xn its realization. Given any xn, we use ^Pxn to denote its type (empirical distribution). All logarithms are base e. We use R+ and N to denote the set of non-negative real numbers and natural numbers respectively. Given any positive integer a∈N, we use [a] to denote {1,⋯,a}. We use 1{⋅} to denote the indicator function and use standard asymptotic notation such as O(⋅)

. The set of all probability distributions on a finite set

X is denoted as P(X). Given any two random variables (X,Y) and any realization of x, we use PY|x(⋅) to denote the conditional distribution PY|X(⋅|x). Given a distribution P∈P(X) and a function f:X→R, we use P(f) to denote EP[f(X)]. For information-theoretic quantities, we follow [16]. In particular, when the joint distribution of (X,Y) is PXY∈P(X×Y), we use IPXY(X;Y) and I(X;Y) interchangeably. Throughout the paper, for ease of notation, we drop the subscript for distributions when there is no confusion. For example, when the joint distribution of (X,Y,Z) is PXYZ, we use IP(X;Y|Z) and IPXYZ(X;Y|Z) interchangeably. For ease of notation, for any (p,q)∈[0,1]2, let Db(p∥q) denote the binary divergence function, i.e., Db(p∥q)=plog(p/q)+(1−p)log((1−p)/(1−q)).

For subsequent analyses, we formally define a code for hypothesis testing over a two-hop network as follows.

An (n,N1,N2)-code for hypothesis testing over a two-hop network consists of

, we define acceptance regions for the null hypothesis

H0 at the relay and the receiver as

and under the alternative hypothesis H1 is given by

respectively and at the receiver as

respectively. Clearly, β1,β2,η1, and η2 are functions of n but we suppress these dependencies for brevity.

Given above definitions, the achievable rate-exponent region for the hypothesis testing problem in a two-hop network is defined as follows.

In the following, we recall the exact characterization of R given by Salehkalaibar, Wigger and Wang [11, Prop. 2]. For this purpose, define the following set of joint distributions

Given QXYZUV∈Q, define the following set

be a linear combination of the mutual information terms in (II-B). Furthermore, define

An alternative characterization of R∗ is given by

The proof of Theorem 2 is given in Section IV. Several remarks are in order.

Second, it appears difficult to establish the strong converse result in Theorem 2 using existing classical techniques including image-size characterizations (a consequence of the blowing-up lemma) [4, 6] and the perturbation approach [17]. In Section IV, we judiciously combine two recently proposed strong converse techniques by Liu, van Handel, and Verdú [12] and by Tyagi and Watanabe [13]. In particular, we use the strong converse technique based on reverse hypercontractivity in [12] to bound the exponent of the type-II error probability at the receiver and the strong converse technique in [13], which leverages an appropriate change-of-measure technique and replaces hard Markov constraints with soft information costs, to analyze the exponent of type-II error probability at the relay. Finally, inspired by the single-letterization steps in [18, Lemma C.2] and [13], we single-letterize the derived multi-letter bounds from the previous steps to obtain the desired result in Theorem 2.

Third, we briefly comment on the apparent necessity of combining the two techniques in [12] and [13] instead of applying just one of them to obtain Theorem 2. The first step to apply the technique in [13] is to construct a “truncated source distribution” which is supported on a smaller set (often defined in terms of the decoding region) and is not too far away from the true source distribution in terms of the relative entropy. For our problem, the source satisfies the Markov chain Xn−Yn−Zn. If we naïvely apply the techniques in [13], the Markovian property would not hold for the truncated source (~Xn,~Yn,~Zn). On the other hand, it appears rather challenging to extend the techniques in [12] to the hypothesis testing over a multi-hop network problem since the techniques therein rely heavily on constructing semi-groups and it is difficult to devise appropriate forms of such semi-groups to be used and analyzed in this multi-hop setting. Therefore, we carefully combine the two techniques in [12] and [13] to ameliorate the aforementioned problems. In particular, we first use the technique in [13] to construct a truncated source (~Xn,~Yn) and then let the conditional distribution of ~Zn given (~Xn,~Yn) be given by the true conditional source distribution PnZ|Y to maintain the Markovian property of the source (see (56)). Subsequently, in the analysis of error exponents, we use the technique in [12] to analyze the exponent of type-II error probability at the receiver to circumvent the need to construct new semi-groups.

In this subsection, we consider the case where the sum of type-I error probabilities at the relay and the receiver is upper bounded by a quantity strictly greater than one. For ease of presentation of our results, let

Given any QXYZU1U2V∈Q2, define the following set of rate-exponent tuples

Given any QXYZU1U2V∈Q2 and (b1,b2,c,d)∈R4+, define the following linear combination of the mutual information terms

Then, based on [15, 14], an alternative characterization of ~R is given by

Analogously to Theorem 2, we obtain the following result.

Using Theorem 3, we obtain the following proposition, which together with the first remark of Theorem 2 provides a strong converse theorem for the problem of hypothesis testing against independence over a two-hop network when ε1+ε2≠1.

The converse proof of Proposition 4 follows from Theorem 3 and the alternative characterization of ~R in (37). The achievability proof is inspired by [6, Theorem 5] and is provided in Appendix -A. The main idea is that we can time-share between two close-to optimal coding schemes, each of which corresponds to one special case of the current problem as mentioned after Theorem 3.

Finally, we remark that the case when ε1+ε2=1 is not included. See [6, Sec. III.D] for a discussion of this subtle case.

We present the proof of strong converse theorem for the hypothesis testing over the two-hop network in this section. The proof follows by judiciously combing the techniques in [12] and [13] and is separated into three main steps. First, we construct a truncated source distribution P~Xn~Yn~Zn and show that this truncated distribution is not too different from PnXYZ in terms of the relative entropy. Subsequently, we analyze the exponents of type-II error probabilities at the relay and the receiver under the constraint that their type-I error probabilities are non-vanishing. Finally, we single-letterize the constraints on rate and error exponents to obtain desired result in Theorem 2.

Iv-a Construction of A Truncated Distribution

respectively. Note that the only difference between AY,n and DY,n lies in whether we consider the compression index m1 or the original source sequence xn. Recalling the definitions of the type-I error probabilities for the relay denoted by β1 in (14) and for the receiver denoted by η1 in (16), and using (40) and (41), we conclude that

For further analysis, given any m2∈M2, define a conditional acceptance region at the receiver (conditioned on m2) as

and define the typical set Tn(PY) as

Using the Chernoff bound, we conclude that when n is sufficiently large,

Let the truncated distribution P~Xn~Yn~Zn be defined as

Using the result in (55), we have that the marginal distribution P~Xn satisfies that for any xn∈XN,

Analogously to (58), we obtain that

Thus, using the data processing inequality for the relative entropy and the definition of β2 in (15), we obtain that