This work derives new results on the strong-consistency of a componentwise estimator of the autocorrelation operator, and its associated plug-in predictor, in the context of autoregressive processes of order one, in a real separable Banach space B (ARB(1) processes). For the estimator of the autocorrelation operator, strong-consistency is proved, in the norm of the space L(B) of bounded linear operators on B. The strong-consistency of the associated plug-in predictor then follows in the norm of B. The methodology applied is based on assuming suitable continuous embeddings between the Banach, Hilbert and Reproducing Kernel Hilbert spaces, involved in the construction proposed in Kuelbs Kuelbs70. This paper extends the results in Bosq00 and Labbas02. 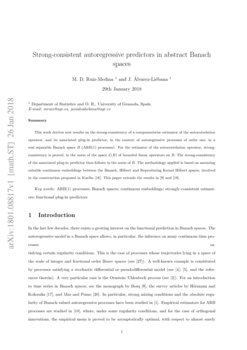 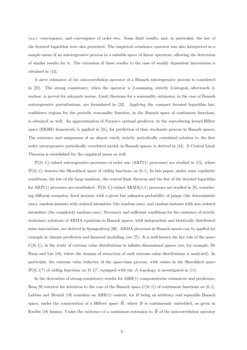 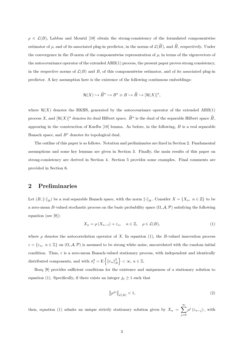 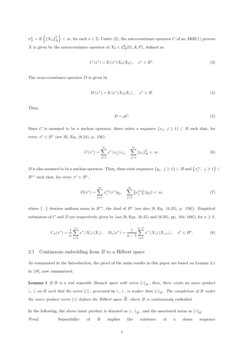 A note on strong-consistency of componentwise ARH(1) predictors

Hierarchical regularization networks for sparsification based learning on noisy datasets

Cointegration and representation of integrated autoregressive processes in function spaces

In the last few decades, there exists a growing interest on the statistical analysis of high–dimensional data, from the Functional Data Analysis (FDA) perspective. The book by

Ramsay and Silverman [2005] provides an overview on FDA techniques, extended from the multivariate data context, or specifically formulated for the FDA framework. The monograph by Hsing and Eubank [2015] introduces functional analytical tools usually applied in the estimation of random elements in function spaces. The book by Horváth and Kokoszka [2012] is mainly concerned with inference based on second order statistics. A central topic in this book is the analysis of functional data, displaying dependent structures in time and space. The methodological survey paper by Cuevas [2014], on the state of the art in FDA, discusses central topics in FDA. Recent advances in the statistical analysis of high–dimensional data, from the parametric, semiparametric and nonparametric FDA frameworks, are collected in the Special Issue by Goia and Vieu [2016].

Álvarez-Liébana [2017]). Its empirical version is computed, when they are unknown. The resulting plug–in predictor is obtained as a linear functional of the observations, based on the empirical approximation of the autocorrelation operator. This approach exploits the Hilbert space structure, and its extension to the metric space context, and, in particular, to the Banach space context, requires to deriving a relationship (continuous embeddings) between the Banach space norm, and the RKHS norm, induced by the autocovariance operator, in contrast with the nonparametric regression approach for functional prediction (see, for instance, Ferraty et al. [2012], where asymptotic normality is derived). Specifically, in the nonparametric approach, a linear combination of the observed response values is usually considered. That is the case of the nonparametric local–weighting–based approach, involving weights defined from an isotropic kernel, depending on the metric or semi–metric of the space, where the regressors take their values (see, for example, Ferraty and Vieu [2006]; see also Ferraty et al. [2002], in the functional time series framework). The nonparametric approach is then more flexible regarding the structure of the space where the functional values of the regressors lie (usually a semi–metric space is considered). However, some computational drawbacks are present in its implementation, requiring the resolution of several selection problems. For instance, a choice of the smoothing parameter, and the kernel involved, in the definition of the weights, should be performed. Real–valued covariates were incorporated in the novel semiparametric kernel–based proposal by Aneiros-Pérez and Vieu [2008], involving an extension to the functional partial linear time series framework (see also Aneiros-Pérez and Vieu [2006]). Goia and Vieu [2015] also adopt a semi–parametric approach in their formulation of a two–terms Partitioned Functional Single Index Model. Geenens [2011] exploits the alternative provided by semi–metrics to avoid the curse of infinite dimensionality of some functional estimators.

On the other hand, in a parametric linear framework, Mas and Pumo [2010] introduced functional time series models in Banach spaces. In particular, strong mixing conditions and the absolute regularity of Banach–valued autoregressive processes have been studied in Allam and Mourid [2001]. Empirical estimators for Banach–valued autoregressive processes are studied in Bosq [2002], where, under some regularity conditions, and for the case of orthogonal innovations, the empirical mean is proved to be asymptotically optimal, with respect to almost surely (a.s.) convergence, and convergence of order two. The empirical autocovariance operator was also interpreted as a sample mean of an autoregressive process in a suitable space of linear operators. The extension of these results to the case of weakly dependent innovations is obtained in Dehling and Sharipov [2005]. A strongly–consistent sieve estimator of the autocorrelation operator of a Banach–valued autoregressive process is considered in Rachedi and Mourid [2003]. Limit theorems for a seasonality estimator, in the case of Banach autoregressive perturbations, are formulated in Mourid [2002]. Confidence regions for the periodic seasonality function, in the Banach space of continuous functions, is obtained as well. An approximation of Parzen’s optimal predictor, in the RKHS framework, is applied in Mokhtari and Mourid [2003]

, for prediction of temporal stochastic process in Banach spaces. The existence and uniqueness of an almost surely strictly periodically correlated solution, to the first order autoregressive model in Banach spaces, is derived in

Parvardeh et al. [2017]. Under some regularity conditions, limit results are obtained for ARD(1) processes in Hajj [2011], where D=D([0,1]) denotes the Skorokhod space of right–continuous functions on [0,1], having limit to the left at each t∈[0,1]. Conditions for the existence of strictly stationary solutions of ARMA equations in Banach spaces, with independent and identically distributed noise innovations, are derived in Spangenberg [2013].

In the derivation of strong–consistency results for ARB(1) componentwise estimators and predictors, Bosq [2000] restricts his attention to the case of the Banach space C([0,1]) of continuous functions on [0,1], with the supremum norm. Labbas and Mourid [2002] considers an ARB(1) context, for B being an arbitrary real separable Banach space, under the construction of a Hilbert space ˜H, where B is continuously embedded, as given in the Kuelbs’s Lemma in [Kuelbs, 1970, Lemma 2.1]. Under the existence of a continuous extension to ˜H of the autocorrelation operator ρ∈L(B), Labbas and Mourid [2002] obtain the strong-consistency of the formulated componentwise estimator of ρ, and of its associated plug–in predictor, in the norms of L(˜H), and ˜H, respectively.

functional data in nuclear spaces, arising, for example, in the observation of the solution to stochastic fractional and multifractional linear pseudodifferential equations (see, for example, Anh et al. [2016a, b]). The scales of Banach spaces constituted by fractional Sobolev and Besov spaces play a central role in the context of nuclear spaces. Continuous (nuclear) embeddings usually connect the elements of these scales (see, for example, Triebel [1983]). In this paper, a Rigged–Hilbert–Space structure is defined, involving the separable Hilbert space ˜H, appearing in the construction of the Kuelbs’s Lemma in [Kuelbs, 1970, Lemma 2.1]. A key assumption, here, is the existence of a continuous (Hilbert–Schmidt) embedding introducing the RKHS, associated with the autocovariance operator of the ARB(1) process, into the Hilbert space generating the Gelfand triple, equipped with a finer topology than the B–topology. Under this scenario, strong–consistency results are derived, in the space L(B) of bounded linear operators on B, considering an abstract separable Banach space framework.

Let (B,∥⋅∥B) be a real separable Banach space, with the norm ∥⋅∥B, and let L2B(Ω,A,P), the space of zero-mean B

is assumed to be strong white noise, uncorrelated with the random initial condition. Thus,

ε is a zero–mean Banach–valued stationary process, with independent and identically distributed components, and with σ2ε=E{∥εn∥2B}<∞, for each n∈Z. Assume that there exists an integer j0≥1 such that

The cross–covariance operator D is given by

D is also assumed to be a nuclear operator. Then, there exist sequences {yj, j≥1}⊂B and {x∗∗j, j≥1}⊂B∗∗ such that, for every x∗∈B∗,

If B is a real separable Banach space with norm ∥⋅∥B, then, there exists an inner product ⟨⋅,⋅⟩˜H on B such that the norm ∥⋅∥˜H, generated by ⟨⋅,⋅⟩˜H, is weaker than ∥⋅∥B. The completion of B under the norm ∥⋅∥˜H defines the Hilbert space ˜H, where B is continuously embedded.

Denote by {xn, n∈N}⊂B, a dense sequence in B, and by {Fn, n∈N}⊂B∗ a sequence of bounded linear functionals on B, satisfying

The inner product ⟨⋅,⋅⟩˜H, and its associated norm, in Lemma 2.1, is defined by

where {tn, n∈N} is a sequence of positive numbers such that ∞∑n=1tn=1.

for any orthonormal basis {vj, j≥1} of ˜H. The trace autocovariance operator

of the extended ARB(1) process is a trace operator in ˜H,

admitting a diagonal spectral representation, in terms of its eigenvalues

{Cj, j≥1} and eigenvectors {ϕj, j≥1}, that provide an orthonormal system in ˜H. Summarizing, in the subsequent developments, the following identities in ˜H will be considered, for the extended version of ARB(1) process X. For each f,h∈˜H,

The following assumption plays a crucial role in the derivation of the main results in this paper.

is a.s. bounded, and the eigenspace

Under Assumption A1, we can define the following quantities:

Assumption A2. Let kn such that

Assumption A3. The following limit holds:

where ↪ denotes, as usual, the continuous embedding, ˜H∗ the dual space of ˜H and H(X) the Reproducing Kernel Hilbert Space associated with C.

Let us consider the closed subspace H of B with the norm induced by the inner product ⟨⋅,⋅⟩H defined as follows:

Then, H is continuously embedded into B, and the following remark provides the isometric isomorphism established by the Riesz Representation Theorem between the spaces ˜H and its dual ˜H∗.

Under Assumption A4, the following continuous embeddings hold:

Proof. Let us consider the following inequalitites, for each x∈B,:

It is well–known that {ϕj, j≥1} is also an orthogonal system in H(X). Futhermore, under Assumption A4, from Lemma 3.1,

The following assumption is now considered on the norm (16):

Assumption A5. The continuous embedding iH(X),H:H(X)↪H belongs to the trace class. That is,

where, in particular, from equation (17),

Under Assumption A1, the following identities hold, for any standard AR˜H(1) process (e.g., the extension to ˜H of ARB(1) process X satisfying equation (1)),

where ∥⋅∥S(˜H) is the norm in the Hilbert space S(˜H) of Hilbert–Schmidt operators on ˜H; i.e., the subspace of compact operators A such that

with 1⋅ being the indicator function.

Under Assumption A5, the following inequality holds:

where N has been introduced in equation (18), L(˜H) denotes the space of bounded linear operators on ˜H, and ∥⋅∥L(˜H) the usual uniform norm on such a space.

Let us consider the following notation.

From Lemma 3.2, for n sufficiently large, there exist positive constants K1 and K2 such that

In particular, for every x∈H(X)=C1/2(˜H), considering n sufficiently large,

Under Assumptions A1 and A4–A5, let us consider Λkn in (10) satisfying

where kn has been introduced in Assumption A2. The following a.s. inequality then holds:

For a standard ARB(1) process satisfying equation (1), under Assumptions A1 and A3–A5, for n sufficiently large,

Under Assumption A3, if

Under the conditions of Lemma 3.7, if

Under the conditions of Remark 3.5, let

Proof. Applying the Cauchy–Schwarz’s inequality, for every k,l≥1,

Proof. Let us first consider the following identities and inequalities: