We characterize the growth of the Sibson mutual information, of any order that is at least unity, between a random variable and an increasing set of noisy, conditionally independent observations of the random variable. The Sibson mutual information increases to an order-dependent limit exponentially fast, with an exponent that is order-independent. The result is contrasted with composition theorems in differential privacy. 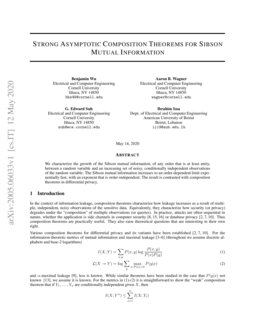 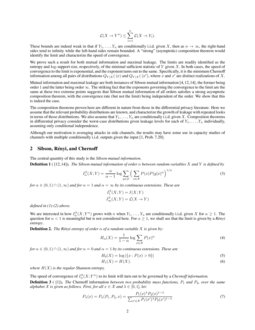 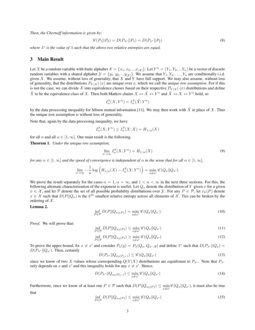 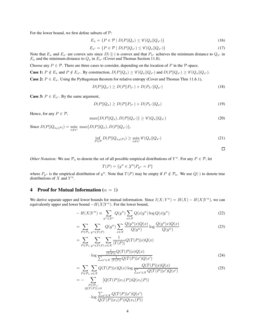 Bounds for Algorithmic Mutual Information and a Unifilar Order Estimator

Barlow (1985) hypothesized that the co-occurrence of two events A and B ...
Christopher K. I. Williams, et al. ∙

In the context of information leakage, composition theorems characterize how leakage increases as a result of multiple, independent, noisy observations of the sensitive data. Equivalently, they characterize how security (or privacy) degrades under the “composition” of multiple observations (or queries). In practice, attacks are often sequential in nature, whether the application is side channels in computer security [8, 15, 16] or database privacy [7, 2, 10]. Thus composition theorems are practically useful. They also raise theoretical questions that are interesting in their own right.

Various composition theorems for differential privacy and its variants have been established [7, 2, 10]. For the information-theoretic metrics of mutual information and maximal leakage [6, 3, 5, 4] (throughout we assume discrete alphabets and base-2 logarithms)

and α-maximal leakage [9], less is known. While similar theorems have been studied in the case that P(y|x) not known  [13], we assume it is known. For the metrics in (1)-(2) it is straightforward to show the “weak” composition theorem that if Y1,…,Yn are conditionally independent given X, then

These bounds are indeed weak in that if Y1,…,Yn are conditionally i.i.d. given X, then as n→∞, the right-hand sides tend to infinity while the left-hand sides remain bounded. A “strong” (asymptotic) composition theorem would identify the limit and characterize the speed of convergence.

We prove such a result for both mutual information and maximal leakage. The limits are readily identified as the entropy and log-support size, respectively, of the minimal sufficient statistic of Y given X. In both cases, the speed of convergence to the limit is exponential, and the exponent turns out to the same. Specifically, it is the minimum Chernoff information among all pairs of distributions QY|X(⋅|x) and QY|X(⋅|x′), where x and x′ are distinct realizations of X.

The composition theorems proven here are different in nature from those in the differential privacy literature. Here we assume that the relevant probability distributions are known, and characterize the growth of leakage with repeated looks in terms of those distributions. We also assume that

Y1,…,Yn are conditionally i.i.d. given X. Composition theorems in differential privacy consider the worst-case distributions given leakage levels for each of Y1,…,Yn individually, assuming only conditional independence.

Although our motivation is averaging attacks in side channels, the results may have some use in capacity studies of channels with multiple conditionally i.i.d. outputs given the input [1, Prob. 7.20].

The central quantity of this study is the Sibson mutual information.

We are interested in how ISα(X;Yn) grows with n when Y1,…,Yn are conditionally i.i.d. given X for α≥1. The question for α<1 is meaningful but is not considered here. For α≥1, we shall see that the limit is given by a Rényi entropy.

The Rényi entropy of order α of a random variable X is given by:

where H(X) is the regular Shannon entropy.

The speed of convergence of ISα(X;Yn) to its limit will turn out to be governed by a Chernoff information.

The Chernoff information between two probability mass functions, P1 and P2, over the same alphabet X is given as follows. First, for all x∈X and λ∈[0,1], let:

Then, the Chernoff information is given by:

where λ∗ is the value of λ such that the above two relative entropies are equal.

be a vector of discrete random variables with a shared alphabet

Y={y1,y2,...y|Y|}. We assume that Y1,Y2,…,Yn are conditionally i.i.d. given X. We assume, without loss of generality, that X and Y have full support. We may also assume, without loss of generality, that the distributions PY|X(⋅|x) are unique over x, which we call the unique row assumption. For if this is not the case, we can divide X into equivalence classes based on their respective PY|X(⋅|x) distributions and define ~X to be the equivalence class of X

. Then both Markov chains

by the data processing inequality for Sibson mutual information [11]. We may then work with ~X in place of X. Thus the unique row assumption is without loss of generality.

Note that, again by the data processing inequality, we have

Under the unique row assumption,

We prove the result separately for the cases α=1, α=∞, and 1<α<∞ in the next three sections. For this, the following alternate characterization of the exponent is useful. Let Qx denote the distribution of Y given x for a given x∈X, and let P denote the set of all possible probability distributions over Y. For any P∈P, let xk(P) denote x∈X such that D(P||Qx) is the kth smallest relative entropy across all elements of X. Ties can be broken by the ordering of X.

We will prove that:

since we know of two X-values whose corresponding Q(Y|X) distributions are equidistant to Pλ∗. Note that Pλ∗ only depends on x and x′ and this inequality holds for any x≠x′. Hence,

Furthermore, since we know of at least one P∈P such that D(P||Qx2(P))≤minx≠x′C(Qx||Qx′), it must also be true that

For the lower bound, we first define subsets of P:

Choose any P∈P. There are three cases to consider, depending on the location of P in the P-space.

Other Notation: We use Pn to denote the set of all possible empirical distributions of Yn. For any P∈P, let

where Pyn is the empirical distribution of yn. Note that T(P) may be empty if P∉Pn. We use Q(⋅) to denote true distributions of X and Yn.

due to the convention that 0log0=0. Then, replacing weighted sums over x with their largest summand gives

and P∗n is its minimizer.

For the upper bound,

As we have now shown that mutual information is upper and lower bounded by expressions of the form H(X)−Kn⋅2−nD∗n for some subexponential sequence Kn, it remains to be shown that this exponent approaches the minimum Chernoff information as n→∞.

First, it can be shown using standard continuity arguments that

since D(P||Qx2(P)) is a continuous function of P. Finally, we arrive at the desired result using Lemma 2.

While the lower bound on IS∞(X;Yn) can be proven directly, due to space constraints we will instead note that the desired bound can be obtained from (73) to follow by letting α→∞. For the upper bound, for fixed n, let

Since xa≠xb and P were arbitrary, the result follows by Lemma 2.

To lower bound ISα(X;Yn), we use the Dx sets defined in the previous proof:

Next we derive an upper bound for R.