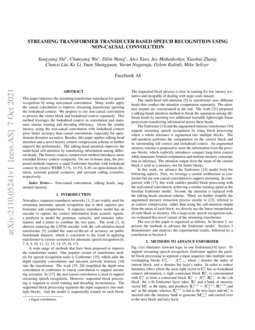 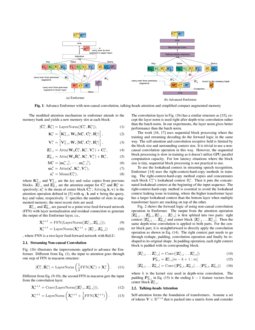 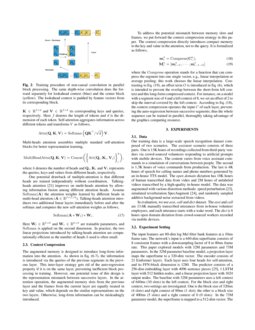 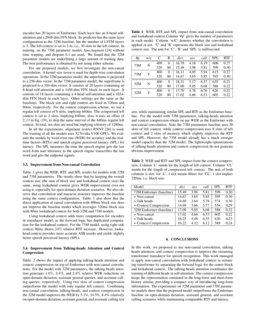 This work studies the use of attention masking in transformer transducer...
Pawel Swietojanski, et al. ∙

are widely used for streaming automatic speech recognition due to their superior performance and compactness. A sequence transducer model has an encoder to capture the context information from acoustic signals, a predictor to model the grammar, syntactic, and semantic information, and a joiner to combine the two parts. The work

A wide range of methods that have been proposed to improve the transformer model. One popular variant of transformer models for speech recognition tasks is Conformer [4], which adds the depth separable convolutions and macaron network structure [9] into the transformer. The work [1, 23] simplified the depth-wise convolution in conformer to causal convolution to support streaming scenarios. In [21], the non-causal convolution is used to support streaming speech recognition. However, sequential block processing is required to avoid training and decoding inconsistency. The sequential block processing segments the input sequences into multiple blocks. And the model is sequentially trained on each block. The sequential block process is slow in training for low latency scenarios and incapable of dealing with large-scale dataset.

The multi-head self-attention [17] in transformer uses different heads that conduct the attention computation separately. The attention outputs are concatenated at the end. The work [14] proposed a talking-heads attention method to break the separation among different heads by inserting two additional learnable lightweight linear projections transferring information across these heads.

The Emformer [15] and the augmented memory transformer [20] support streaming speech recognition by using block processing where a whole utterance is segmented into multiple blocks. The self-attention performs the computation on the current block and its surrounding left context and lookahead context. An augmented memory scheme is proposed to store the information from the previous blocks, which explicitly introduces compact long-form context while maintains limited computation and runtime memory consumption in inference. The attention output from the mean of the current block is used as a memory slot for future blocks.

In this work, we advance the Emformer [15] model from the following aspects. First, we leverage a similar architecture as conformer but use non-causal convolution to support streaming. In comparison with [21], this work enables parallel block processing with the non-causal convolution, achieving a similar training speed as the baseline Emformer model. Second, the attention is replaced with the talking-heads attention scheme. Third, we further simplify the augmented memory extraction process similar to [13]

, referred to as context compression: rather than using the self-attention output from the mean of each block, we directly use the linear interpolation of each block as memory. On a large-scale speech recognition task, we evaluated this novel variant of the streaming transformer.

The rest of this paper is organized as follows. In Section 2, we present the methods to advance the Emformer model. Section 3 demonstrates and analyzes the experimental results, followed by a conclusion in Section 4.

Fig. (0(a)) illustrates forward logic in one Emformer[15] layer. To support streaming speech recognition, Emformer applies the parallel block processing to segment a input sequence into multiple non-overlapping blocks Cn1,⋯,Cni−1, where i denotes the index of current block, and n

denotes the layer’s index. In order to reduce boundary effect where the most right vector in

Cni has no lookahead context information, a right contextual block Rni, is concatenated with Cni to form a contextual block Xni=[Cni,Rni]. At the i-th block, the n-th Emformer layer takes Xni and a bank of memory vector Mni as the input, and produces Xn+1i=[Cn+1i,Rn+1i] and mni as the output, whereas Xn+1i is fed to the next layer and mni is inserted into the memory bank to generate Mn+1i+1 and carried over to the next block and next layer.

The modified attention mechanism in emformer attends to the memory bank and yields a new memory slot at each block:

where KnL,i and VnL,i are the key and value copies from previous blocks. ZnC,i and ZnR,i are the attention output for Cni and Rni respectively; sni is the mean of center block Cni; Attn(q,k,v) is the attention operation defined in [17] with q , k and v being the query, key and value, respectively. U specifies the number of slots in augmented memory; the most recent slots are used.

are passed to a point-wise feed-forward network (FFN) with layer normalization and residual connection to generate the output of this Emformer layer, i.e.,

, where FNN is a two-layer feed-forward network with ReLU.

Fig. (0(b)) illustrates the improvements applied to advance the Emformer. Different from Eq. (1), the input to attention goes through one step of FFN in macaron structure:

Different from Eq. (9-10), the second FFN in macaron gets the input from the convolution layer.

). The right context part needs to go through reshape, padding, convolution operation and finally be reshaped to its original shape. In padding operation, each right context block is padded with its corresponding block.

where k is the kernel size used in depth-wise convolution. The padding PnR,i in Eq. (15) is the ending k−1 feature vectors from center block ZnC,i.

Self-attention forms the foundation of transformers. Assume a set of tokens V∈Rf×d that is packed into a matrix form and consider K∈Rf×d and V∈Rf×d its corresponding keys and queries, respectively. Here f denotes the length of tokens and d is the dimension of each token. Self-attention aggregates information across different tokens and transforms V as follows,

where h denotes the number of heads and Qi, Ki and Vi represents the queries, keys and values from different heads, respectively.

Here Wl∈Rh×h and Wr∈Rh×h are trainable parameters, and Softmax is applied on the second dimension. In practice, the two linear projections introduced by talking-heads attention are computationally efficient as the number of heads h used is often small.

The augmented memory is designed to introduce long-form information into the attention. As shown in Eq. (6-7), the information is introduced via the queries of the previous segments in the previous layer. This inter-layer strategy gets rid of the auto-regression property if it is on the same layer, preventing inefficient block processing in training. However, one potential issue of this design is the representation mismatch between successive layers. In the attention operation, the augmented memory slots from the previous layer and the frames from the current layer are equally treated in key and value, which depends on the similar representations on the two layers. Otherwise, long-form information can be misleadingly introduced.

where the Compress operation stands for a function that can compress the segment into one single vector, e.g., linear interpolation or average pooling; this work chooses the linear interpolation. Contrasting to Eq. (19), an offset term O is introduced in Eq. (6), which is intended to prevent the overlap between the short-form left context and this long-form compressed context. For instance, on a model with a segment size of 4 and a left context of 8, we set an offset of 2 to skip the interval covered by the left context. According to Eq. (18), the context compression operates the input C of each layer, preventing the auto-regression between successive segments; thus the whole sequence can be trained in parallel, thoroughly taking advantage of the graphics computing resource.

Our training data is a large-scale speech recognition dataset composed of two scenarios. The assistant scenario consists of three parts. One is 13K hours of recordings collected from third-party vendors via crowd-sourced volunteers responding to artificial prompts with mobile devices. The content varies from voice assistant commands to a simulation of conversations between people. The second is 1.3K hours of voice commands from production. The last is 4K hours of speech for calling names and phone numbers generated by an in-house TTS model. The open domain dictation has 18K hours of human transcribed data from video and 2M hours of unlabeled videos transcribed by a high-quality in-house model. The data was augmented with various distortion methods: speed perturbation [7], simulated reverberation SpecAugment [11], and randomly sampled additive background noise extracted from videos.

In evaluation, we use assi, call and dict dataset. The assi and call are 13.6K manually transcribed utterances from in-house volunteer employees, and each utterance starts with a wake word. The dict is 8 hours open domain dictation from crowd-sourced workers recorded via mobile devices.

The input features are 80-dim log Mel filter bank features at a 10ms frame rate; The network’s input is a 640-dim superframe consists of 8 consistent frames with a downsampling factor of 8 to 80ms frame rate. This paper explored models with 32M parameters and 73M parameters. In the 32M parameter baseline model, a projection layer maps the superframe to a 320-dim vector. The encoder consists of 21 Emformer layers. Each layer uses four heads for self-attention, and its FFN-block dimension is 1280. The predictor consists of a 256-dim embedding layer with 4096 sentence pieces [8], 1 LSTM layer with 512 hidden nodes, and a linear projection layer with 1024 output nodes. The baseline with 32M parameters uses a left context of 640ms (10 slots) in the left context. For the block size and right context, two settings are investigated. One is the block size of 320ms (4 slots) and right context of 80ms (1 slot); the other is a block size of 400ms (5 slots) and a right context of 0 (0 slots). In the 73M parameter model, the superframe is mapped to a 512-dim vector. The encoder has 20 layers of Emformer. Each layer has an 8-head self-attention and a 2048-dim FFN block. Its predictor has the same layer configuration as the 32M baseline, but the number of LSTM layers is 3. The left context is set to 2.4s, i.e., 30 slots in the left context. In training, on the 73M parameter model, SpecAugment [11] without time warping, and dropout 0.1 are used. We found that the 32M parameter models are underfitting a large amount of training data. The best performance is obtained by not using either scheme.

Table. 1 gives the WER, RTF, and SPL results for models with 32M and 73M parameters. The results show that by keeping the overall context size (the sum of block size and lookahead context size) the same, using lookahead context gives WER improvement over not using it, especially for open domain dictation scenarios. We also observe that convolution and macaron structure improves the baseline using the same context configuration. Table. 1 also show that the direct application of causal convolution with 400ms block size does not improve the baseline model which leverages 320ms block size with 80ms lookahead context for both 32M and 73M models.

In this work, we proposed to use non-causal convolution, talking heads attention, and context compression to improve the streaming transformer transducer for speech recognition. This work managed to apply non-causal convolution with lookahead context in streaming transformer by separating the forward logic for the center block and lookahead context. The talking-heads attention coordinates the training of different heads in self-attention. The context compression keeps the representation contained in the long-form and short-form history similar, providing a compact way of introducing long-form information. The experiments on 32M parameter and 73M parameter models show that the proposed model outperforms the Emformer baseline on open-domain dictation, assistant general, and assistant calling scenarios while maintaining comparable RTF and latency.