In voice-enabled applications, a predetermined hotword isusually used to activate a device in order to attend to the query.However, speaking queries followed by a hotword each timeintroduces a cognitive burden in continued conversations. Toavoid repeating a hotword, we propose a streaming end-to-end(E2E) intended query detector that identifies the utterancesdirected towards the device and filters out other utterancesnot directed towards device. The proposed approach incor-porates the intended query detector into the E2E model thatalready folds different components of the speech recognitionpipeline into one neural network.The E2E modeling onspeech decoding and intended query detection also allows us todeclare a quick intended query detection based on early partialrecognition result, which is important to decrease latencyand make the system responsive. We demonstrate that theproposed E2E approach yields a 22 and 600 mslatency improvement compared with an independent intendedquery detector. In our experiment, the proposed model detectswhether the user is talking to the device with a 8.7 user starts speaking. 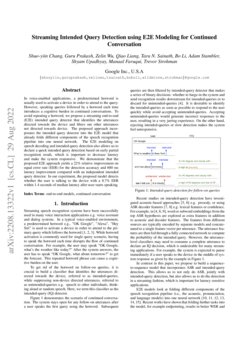 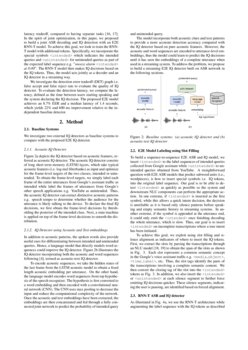 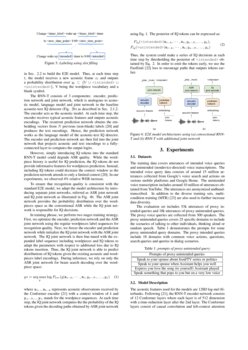 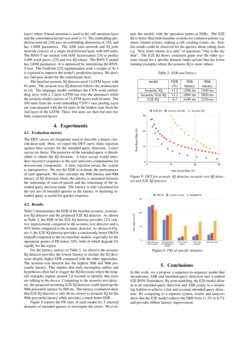 When interacting with smart devices such as mobile phones or wearables, ...
Ognjen Rudovic, et al. ∙

Streaming speech recognition systems have been successfully used in many voice interaction applications e.g. voice assistant and dialog systems. In a typical voice-enabled environment, a predetermined hotword e.g., ”OK Google”, ”Alexa”, ”Hey Siri” is used to activate a device in order to attend to the primary query which follows the hotword [9, 21, 23]. While hotword activation is commonly used for single query scenario, having to speak the hotword each time disrupts the flow of continued conversation. For example, the user may speak ”OK Google, what’s the weather like today?” After the system answers, the user has to speak “OK Google, what about tomorrow?” to get the forecast. This repeated hotword phrase can cause a cognitive burden on the user.

, word or subword embeddings from the top ASR hypothesis are explored as extra features in addition to acoustic and decoder features. The features from different sources are typically encoded by separate models and concatenated to a single feature vector per utterance. The utterance features are then fed through a fully connected network to compute the probability of the intended query. However, the utterance-level classifiers may need to consume a complete utterance to declare an IQ decision, which is undesirable for many streaming applications. For example, the system is expected to pause immediately if a user speaks to the device in the middle of system response as given by the example in Figure

E2E models look at folding different components of the speech recognition pipeline (i.e., the acoustic, pronunciation, and language models) into one neural network

[15, 6, 4, 12, 16, 25]. Recent works have shown that folding further tasks into the model, for example endpointing, results in better WER and latency tradeoff, compared to having separate tasks [3, 14]. In the spirit of joint optimization, in this paper, we proposed to build a joint ASR decoding and IQ detection with an E2E RNN-T model. To achieve this goal, we look to train the RNN-T model with additional tokens. Specifically, we incorporate the special symbols <intended> which indicates the intended queries and <unintended> for unintended queries as part of the expected label sequence e.g. ”snooze alarm <intended> at 8:00”. The RNN-T model then makes IQ decisions based on the IQ tokens. Thus, the model acts jointly as a decoder and an IQ detector in a streaming way.

We investigate the detection error tradeoff (DET) graph i.e. false accept and false reject rate to evaluate the quality of IQ detector. To evaluate the detection latency, we compute the latency, defined as the time between users starting speaking and the system declaring the IQ decision. The proposed E2E model achieves an 8.7% EER and a median latency of 1.4 seconds, which yields 22% and 600 ms improvement relative to the independent baseline detector.

In addition to acoustic patterns, the spoken words also provide useful cues for differentiating between intended and unintended queries. Hence, a language model that directly models word sequences could improve the IQ detector. Figure 2b illustrates the IQ detector incorporating both the acoustic and word sequences following [7], termed as acoustic-text IQ detector.

To encode acoustic sequences, we take the hidden states of the last frame from the LSTM acoustic model to obtain a fixed length acoustic embedding per utterance. On the other hand, the language model encodes word sequences from top hypothesis of the speech recognizer. The hypothesis is first converted to a word embedding and then encoded with a convolutional neural network (CNN). The CNN uses max pooling to decrease the input and reduce the computational complexity of the network. Once the acoustic and text embeddings have been extracted, the embeddings are then concatenated and fed through a fully connected joint network to predict the probability of intended query and unintended query.

The model incorporate both acoustic clues and text patterns to provide a more accurate detection accuracy compared with the IQ detector based on pure acoustic features. However, the acoustic and word sequences are encoded to utterance-level embeddings, thus the model could learn to predict the IQ decisions until it has seen the embeddings of a complete utterance when used in a streaming system. To address the problem, we propose to build a streaming E2E IQ detector built on ASR network in the following sections.

To build a sequence-to-sequence E2E ASR and IQ model, we insert <intended> to the label sequences of intended queries collected from Google assistant while <unintended> to unintended queries obtained from YouTube. A straightforward question with E2E ASR models that predict subword units (i.e., wordpieces), is how to insert special symbols i.e. IQ tokens, into the original label sequence. Our goal is to be able to detect <intended> as quickly as possible so the system and downstream NLU components can perform the appropriate action. In one extreme, if <intended> is inserted as the first symbol, while this allows a quick intent decision, the decision is unreliable as it is based only silence patterns before speaking and empty semantic history in streaming systems. In another extreme, if the symbol is appended at the utterance end, it could only emit the <intended> once finishing decoding the whole utterance, which is slow. Thus, our goal is to insert <intended> on incomplete transcriptions where a true intent has been initiated.

To achieve this goal, we exploit using slot filling and silence alignment as indicators of where to insert the IQ tokens. First, we extract the slots by parsing the transcriptions through an NLU model [10, 2] to obtain the span of the slots as shown in Fig. 3. Each slot represents a common semantic concept in the Google’s voice assistant traffic e.g. <media_object>, <time_label>, etc. Thus, the slot tags identify the parts of the transcriptions involving a complete semantic content. We then convert the closing tag of the slot into the <intended> tokens as Fig. 3. In addition, we also insert the <intended> or <unintended> at each silence segment to further force emitting IQ decisions quicker. These silence segments, indicating the user is pausing, are identified based on forced alignment.

As illustrated in Fig. 4a, we use the RNN-T architecture while augmenting the label sequence with the IQ tokens as described in Sec. 2.2 to build the E2E model. Thus, at each time step t, the model receives a new acoustic frame xt

and outputs a probability distribution over

yt⊂{V∪<intended>∪<unintended>}, V being the wordpiece vocabulary and a blank symbol.

The RNN-T consists of 3 components: encoder, prediction network and joint network, which is analogous to acoustic model, language model and joint network in the baseline acoustic-text IQ detector (Fig. 2b) as described in Sec. 2.1.2. The encoder acts as the acoustic model. At each time step, the encoder receives typical acoustic features and outputs acoustic encodings. The recurrent prediction network obtains the embedding vectors from N previous (non-blank) labels [1]

However, simply introducing IQ tokens into the standard RNN-T model could degrade ASR quality. While the wordpiece history is useful for IQ prediction, the IQ tokens do not provide informative features for wordpieces prediction. Instead, including IQ tokens could decrease the context window as the prediction network attends to only a limited context [1]. In our experiments, we observed 4% relative WER increase.

where xt,...xt−k represents acoustic observations received by the Conformer encoder [5] with a context window of k and yu−N,...yu stands for the wordpiece sequences. At each time step, the IQ joint network computes the the probability of the IQ tokens given the decoding paths obtained by ASR joint network using Eq. 1. The posterior of IQ tokens can be expressed as:

Thus, the system could make a series of IQ decisions at each time step by thresholding the posterior of <intended> obtained by Eq. 2. In order to emit the tokens early, we use the FastEmit [24] loss to encourage paths that outputs tokens earlier.

The acoustic features used for the models are 128D log-mel filterbanks. Following [5], the RNN-T encoder network consists of 12 Conformer layers where each layer is of 512 dimension with a time-reduction layer after the 2nd layer. The Conformer layers consist of causal convolution and left-context attention layers where 8-head attention is used in the self-attention layer and the convolution kernel size used is 15. The embedding prediction network [1] uses an embedding dimension of 320, and has 1.96M parameters. The ASR joint network and IQ joint network consists of a single feed-forward layer with 640 units. The RNN-T are trained with HAT factorization [22] to predict 4,096 word pieces [19] and two IQ tokens. The RNN-T model has 140M parameters. It is optimized by minimizing the RNN-T loss. The FastEmit [24] regularization with a weight of 5e-3 is explored to improve the model’s prediction latency. We don’t use 2nd-pass model for the experiments here.

The baseline acoustic IQ detector used 3 LSTM layers with 64 units. The acoustic-text IQ detector follows the architecture in [7]. The language model combines the CNN word embedding layer with a 2 layer LSTM run over the utterances while the acoustic model consists of 3 LSTM layers with 64 units. The 100 units from the word embedding CNN’s max pooling layer are concatenated with the 64 units of the hidden state from the 2nd layer of the LSTM. These 164 units are then fed into two fully connected layers.

The DET curves are frequently used to describe a binary classification task. Here, we report the DET curve (false rejection against false accept) for the intended-query detection. Lower curves are better. The posterior of the intended-query is thresholded to obtain the IQ decision. A false accept would introduce incorrect responses to the user and extra computations for downstream components. A false rejection means the system is unresponsive. We use the EER to evaluate the performance of each approach. We also calculate the 50th latency and 90th latency of IQ detection where the latency is measured between the timestamp of start-of-speech and the timestamp of the intended query decision made. The latency is only calculated for the test sets of intended queries as the latency of declaring intended query is useful for quicker response.

Figure 6 reports the FR rates of each model for 5 selected domains of intended queries to investigate the errors. We evaluate the models with the operation points at EERs. The E2E IQ is better than both baseline systems for common actions e.g. music related actions, making a call, creating events, etc. Similar trends could be observed for the queries about asking facts e.g. ”how many metres in a mile” or questions ”why is the sky blue”. The E2E IQ shows consistent gains over the other systems except for a specific domain (undo action) that has fewer training examples where the acoustic IQ is more robust.