In this paper we model a class of stream and block ciphers as systems of (ordinary) explicit difference equations over a finite field. We call this class "difference ciphers" and we show that ciphers of application interest, as for example systems of LFSRs with a combiner, Trivium and Keeloq, belong to the class. By using Difference Algebra, that is, the formal theory of difference equations, we can properly define and study important properties of these ciphers, such as their invertibility and periodicity. We describe then general cryptanalytic methods for difference ciphers that follow from these properties and are useful to assess the security. We illustrate such algebraic attacks in practice by means of the ciphers Bivium and Keeloq. 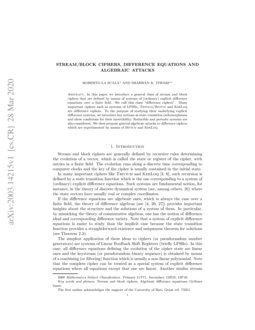 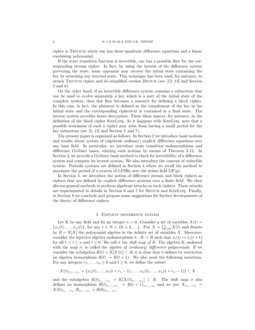 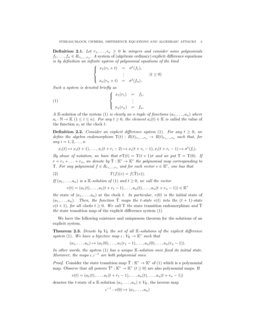 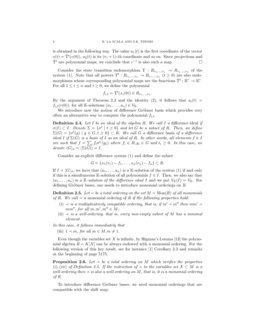 Stream and block ciphers are generally defined by recursive rules determining the evolution of a vector, which is called the state or register of the cipher, with entries in a finite field. The evolution runs along a discrete time corresponding to computer clocks and the key of the cipher is usually contained in the initial state.

In many important ciphers like Trivium and KeeLoq [3, 6], such recursion is defined by a state transition function which is the one corresponding to a system of (ordinary) explicit difference equations. Such systems are fundamental notion, for instance, in the theory of discrete dynamical system (see, among others, [8]) where the state vectors have usually real or complex coordinates.

If the difference equations are algebraic ones, which is always the case over a finite field, the theory of difference algebras (see [4, 20, 27]) provides important insights about the structure and the solutions of a system of them. In particular, by mimicking the theory of commutative algebras, one has the notion of difference ideal and corresponding difference variety. Note that a system of explicit difference equations is easier to study than the implicit case because the state transition function provides a straightforward existence and uniqueness theorem for solutions (see Theorem 2.3).

The simplest application of these ideas to ciphers (or pseudorandom number generators) are systems of Linear Feedback Shift Registers (briefly LFSRs). In this case, all difference equations defining the evolution of the cipher state are linear ones and the keystream (or pseudorandom binary sequence) is obtained by means of a combining (or filtering) function which is usually a non-linear polynomial. Note that the complete cipher can be treated as a special system of explicit difference equations where all equations except that one are linear. Another similar stream cipher is Trivium where one has three quadratic difference equations and a linear combining polynomial.

If the state transition function is invertible, one has a possible flaw for the corresponding stream cipher. In fact, by using the inverse of the difference system governing the state, some opponent may recover the initial state containing the key by attacking any internal state. This technique has been used, for instance, to attack Trivium cipher and its simplified version Bivium (see [12, 14] and Section 5 and 6).

On the other hand, if an invertible difference system contains a subsystem that can be used to evolve separately a key which is a part of the initial state of the complete system, then this flaw becomes a resource for defining a block cipher. In this case, in fact, the plaintext is defined as the complement of the key in the initial state and the corresponding ciphertext is contained in a final state. The inverse system provides hence decryption. These ideas appear, for instance, in the definition of the block cipher KeeLoq. As it happens with KeeLoq, note that a possible weackness of such a cipher may arise from having a small period for the key subsystem (see [5, 15] and Section 5 and 7).

The present paper is organized as follows. In Section 2 we introduce basic notions and results about system of (algebraic ordinary) explicit difference equations over any base field. In particular, we introduce state transition endomorphisms and difference Gröbner bases, relating such notions by means of Theorem 2.12. In Section 3, we provide a Gröbner basis method to check for invertibility of a difference system and compute its inverse system. We also introduce the concept of reducible system. Periodic systems are defined in Section 4 where we recall the method to maximize the period of a system of LFSRs over the prime field GF(p).

In Section 5, we introduce the notion of difference stream and block ciphers as ciphers that are defined by explicit difference systems over a finite field. We then discuss general methods to perform algebraic attacks on such ciphers. These attacks are experimented in details in Section 6 and 7 for Bivium and KeeLoq. Finally, in Section 8 we conclude and propose some suggestions for further developments of the theory of difference ciphers.

Let K be any field and fix an integer n>0. Consider a set of variables X(t)={x1(t),…,xn(t)}, for any t∈N={0,1,2,…}. Put X=⋃t≥0X(t) and denote by R=K[X] the polynomial algebra in the infinite set of variables X. Moreover, consider the injective algebra endomorphism σ:R→R such that xi(t)↦xi(t+1) for all 1≤i≤n and t≥0. We call σ the shift map of R. The algebra R, endowed with the map σ, is called the algebra of (ordinary) difference polynomials. If we consider the subalgebra R(t)=K[X(t)]⊂R, it is clear that σ defines by restriction an algebra isomorphism R(t)→R(t+1). We also need the following notations. For any integers r1,…,rn≥0 and t≥0, we define the subset

Let r1,…,rn≥0 be integers and consider some polynomials f1,…,fn∈Rr1,…,rn. A system of (algebraic ordinary) explicit difference equations is by definition an infinite system of polynomial equations of the kind

Such a system is denoted briefly as

We have the following existence and uniqueness theorem for the solutions of an explicit system.

Denote by VK the set of all K-solutions of the explicit difference system (???). We have a bijective map ι:VK→Kr such that

In other words, the system (???) has a unique K-solution once fixed its initial state. Moreover, the maps ι,ι−1 are both polynomial ones.

Consider the state transition map ^T:Kr→Kr of (1) which is a polynomial map. Observe that all powers ^Tt:Kr→Kr (t≥0) are also polynomial maps. If

denotes the t-state of a K-solution (a1,…,an)∈VK, the inverse map

is obtained in the following way. The value a1(t) is the first coordinate of the vector v(t)=^Tt(v(0)), a2(t) is its (r1+1)-th coordinate and so on. Since projections and ^Tt are polynomial maps, we conclude that ι−1 is also such a map. ∎

We introduce now the notion of difference Gröbner basis which provides very often an alternative way to compute the polynomial fi,t.

Consider an explicit difference system (1) and define the subset

Let ≺ be a total ordering on the set M=Mon(R) of all monomials of R. We call ≺ a monomial ordering of R if the following properties hold:

In this case, it follows immediately that

Even though the variables set X is infinite, by Higman’s Lemma [13] the polynomial algebra R=K[X] can be always endowed with a monomial ordering. For the following version of this key result, see for instance [1] Corollary 2.3 and remarks at the beginning of page 5175.

To introduce difference Gröbner bases, we need monomial orderings that are compatible with the shift map.

For an optimized version of the Buchberger procedure for difference Gröbner bases, we refer to [9, 19].

Consider an explicit difference system (???) and assume that R is endowed with a difference monomial ordering such that xi(ri)≻lm(fi), for all 1≤i≤n. Then, the set G={x1(r1)−f1,…,xn(rn)−fn} is a difference Gröbner basis.

From the assumption on the monomial ordering it follows that xi(ri)=lm(xi(ri)−fi), for any i. By the linearity of such distinct leading monomials, we conclude that G is a difference Gröbner basis. ∎

The map η:R→Rr1,…,rn,f↦NFI(f) is an algebra homomorphism. In other words, one has the algebra isomorphism η′:R/I→Rr1,…,rn such that f+I↦NFI(f).

By definition, we have that η is a surjective K-linear map and Kerη=I. Then, it is sufficient to show that mm′∉LM(I), for all monomials m,m′∉LM(I). This holds because LM(I) is an ideal which is generated by variables. ∎

Observe finally that the above result implies that fi,t=Tt(xi(0))=NFI(xi(t)).

An important class of explicit difference systems are the ones such that a t-state can be obtained from a t′-state also for t′≥t.

For an explicit difference system (???), consider the state transition endomorphism T:Rr1,…,rn→Rr1,…,rn and the corresponding state transition map ^T:Kr→Kr (r=r1+…+rn). We call the system invertible if T is an automorphism. In this case, ^T is also a bijective map.

We recall now an effective invertibility criterion for endomorphisms of polynomial algebras. For a complete reference see [26]. Recall that a Gröbner basis G={g1,…,gr} is called (completely) reduced if the polynomial gi is normal modulo the ideal generated by G∖{gi}, for all 1≤i≤r.

With respect to a product monomial ordering of the algebra Qr1,…,rn such that Xr1,…,rn≻X′r1,…,rn, the reduced Gröbner basis of J has the following form

By applying Theorem 3.2, it is sufficient to observe that the set

is the reduced Gröbner basis for the ideal of Qr1,…,rn that is generated by it. ∎

By the above result, we obtain a sufficient condition to invertibility which is immediate to verify.

With the same notations and assumptions of Proposition 3.3, consider the set

Since the variables of gi are in Xr1,…,rn∖X(0), the normal form g′i modulo the ideal generated by G is clearly a polynomial with variables in the set

Then, the reduced Gröbner basis of the ideal J⊂Qr1,…,rn is given by the following polynomials, for any i=1,2,…,n

For an explicit difference system (???), consider the ideal J⊂Qr1,…,rn=Rr1,…,rn⊗R′r1,…,rn which is generated by the following polynomials, for each i=1,2,…,n

We call J the state transition ideal of the system (1).

From now on, we assume that Qr1,…,rn is endowed with a product monomial ordering such that Xr1,…,rn≻X′r1,…,rn.

Consider an invertible system (???) and the corresponding state transition ideal J⊂Qr1,…,rn. If the set

The inverse of an invertible system (???) is by definition the following explicit difference system

Another useful notion is the following one.

An explicit difference system (???) is called reducible if there is an integer 0<m<n such that we have a subsystem

One obtains immediately the following result.

Note that if K=GF(q) is a finite field, the symmetric group \SS(Kr) has finite order and therefore all invertible systems are in fact periodic. We also observe that if K is an infinite field, then the state transition endomorphism T is bijective if and only if the state transition map ^T is bijective. Moreover, we have that T is periodic if and only if ^T is periodic and in this case these maps have the same period. Such facts are consequences of the following general result (see for instance [21, 23]).

The map φ↦^φ is an homomorphism from the monoid of the algebra endomorphism of P to the monoid of polynomial maps Kr→Kr. If K is an infinite field, such monoid homomorphism is bijective. Otherwise, if K=GF(q) then the map φ↦^φ induces a monoid isomorphism from the monoid of algebra endomorphisms of the quotient algebra P/L, where L=⟨xq1−x1,…,xqr−xr⟩⊂P. Note that P and P/L are the coordinate algebras of the affine space Kr for the case that K is an infinite or finite field, respectively.

An important and difficult task is to compute, or at least bound, the period of a periodic explicit difference system. As usual, the task becomes easy in the linear case.

An explicit difference system (???) is called linear if all polynomials fi (1≤i≤n) are homogeneous linear ones. In other words, the state transition map ^T:Kr→Kr is a K-linear endomorphism of the vector space Kr.

Restating the Rational (or Frobenius) Canonical Form of a square matrix (see, for instance, [16]) in terms of K-linear endomorphisms, one has the following result.