Systemic lupus erythematosus (SLE) is the tenth leading cause of death in females 15-24 years old in the US. The diversity of symptoms and immune pathways expressed in SLE patients causes difficulties in treating SLE as well as in new clinical trials. This study used unsupervised learning on gene expression data from adult SLE patients to separate patients into clusters. The dimensionality of the gene expression data was reduced by three separate methods (PCA, UMAP, and a simple linear autoencoder) and the results from each of these methods were used to separate patients into six clusters with k-means clustering. The clusters revealed three separate immune pathways in the SLE patients that caused SLE. These pathways were: (1) high interferon levels, (2) high autoantibody levels, and (3) dysregulation of the mitochondrial apoptosis pathway. The first two pathways have been extensively studied in SLE. However, mitochondrial apoptosis has not been investigated before to the best of our knowledge as a standalone cause of SLE, independent of autoantibody production, indicating that mitochondrial proteins could lead to a new set of therapeutic targets for SLE in future research. 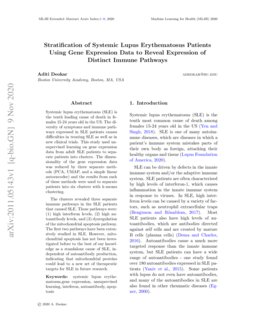 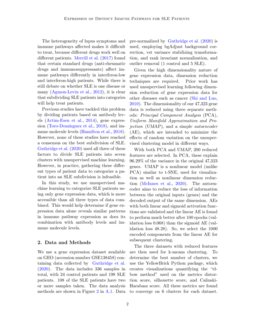 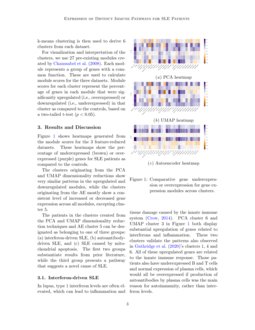 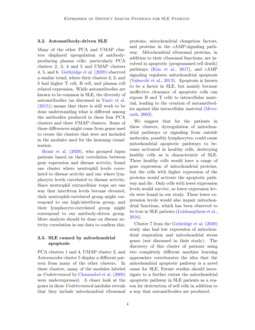 Depression is a common disease which emerges with a disorder in temper. ...
MAJ Dr. Sorush niknamian, et al. ∙

Traditional clustering methods are limited when dealing with huge and he...
Kaijie Xu, et al. ∙

EXCLUVIS: A MATLAB GUI Software for Comparative Study of Clustering and Visualization of Gene Expression Data

Systemic lupus erythematosus (SLE) is the tenth most common cause of death among females 15-24 years old in the US (Yen2018). SLE is one of many autoimmune diseases, which are diseases in which a patient’s immune system mistakes parts of their own body as foreign, attacking their healthy organs and tissue (LupusFoundationofAmerica2020).

The heterogeneity of lupus symptoms and immune pathways affected makes it difficult to treat, because different drugs work well on different patients. Merrill2017 found that certain standard drugs (anti-rheumatic drugs and immunosuppressants) affect immune pathways differently in interferon-low and interferon-high patients. While there is still debate on whether SLE is one disease or many (Agmon-Levin2012), it is clear that subdividing SLE patients into categories will help treat patients.

Previous studies have tackled this problem by dividing patients based on antibody levels (Artim-Esen2014), gene expression (Toro-Dominguez2018), and immune molecule levels (Hamilton2018). However, none of these studies have reached a consensus on the best subdivision of SLE. Guthridge2020 used all three of these factors to divide SLE patients into seven clusters with unsupervised machine learning. However, in practice, gathering these different types of patient data to categorize a patient into an SLE subdivision is infeasible.

In this study, we use unsupervised machine learning to categorize SLE patients using only gene expression data, which is more accessible than all three types of data combined. This would help determine if gene expression data alone reveals similar patterns in immune pathway expression as does its combination with antibody levels and immune molecule levels.

Given the high dimensionality nature of gene expression data, dimension reduction techniques are required. Prior work has used unsupervised learning following dimension reduction of gene expression data for other diseases such as cancer (Shi2010). The dimensionality of our 47,323 gene data is reduced using three separate methods: Principal Component Analysis (PCA), Uniform Manifold Approximation and Projection (UMAP), and a simple autoencoder (AE), which are intended to minimize the effects of random variation on the unsupervised clustering model in different ways.

With both PCA and UMAP, 200 reduced features are selected. In PCA, these explain 96.29% of the variance in the original 47,323 genes. UMAP is a nonlinear model (unlike PCA) similar to t-SNE, used for visualization as well as nonlinear dimension reduction (McInnes2018)

. The autoencoder aims to reduce the loss of information between the original inputs (genes) and the decoded output of the same dimension. AEs with both linear and sigmoid activation functions are validated and the linear AE is found to perform much better after 100 epochs (validation loss 0.068) than the sigmoid AE (validation loss 48.28). So, we select the 1000 encoded components from the linear AE for subsequent clustering.

The three datasets with reduced features are then used for k-means clustering. To determine the best number of clusters, we use the YellowBrick Python package, which creates visualizations quantifying the “elbow method” used on the metrics distortion score, silhouette score, and Calinski-Harabasz score. All these metrics are found to converge on 6 clusters for each dataset. k-means clustering is then used to derive 6 clusters from each dataset.

For visualization and interpretation of the clusters, we use 27 pre-existing modules created by Chaussabel2008

. Each module represents a group of genes with a common function. These are used to calculate module scores for the three datasets. Module scores for each cluster represent the percentage of genes in each module that were significantly upregulated (i.e., overexpressed) or downregulated (i.e., underexpressed) in that cluster as compared to the controls, based on a two-tailed t-test (

fig:heatmaps shows heatmaps generated from the module scores for the 3 feature-reduced datasets. These heatmaps show the percentage of underexpressed (brown) or overexpressed (purple) genes for SLE patients as compared to the controls.

The patients in the clusters created from the PCA and UMAP dimensionality reduction techniques and AE cluster 5 can be designated as belonging to one of three groups: (a) interferon-driven SLE, (b) autoantibody-driven SLE, and (c) SLE caused by mitochondrial apoptosis. The first two groups substantiate results from prior literature, while the third group presents a pathway that suggests a novel cause of SLE.

In lupus, type 1 interferon levels are often elevated, which can lead to inflammation and tissue damage caused by the innate immune system (Crow2014). PCA cluster 6 and UMAP cluster 3 in fig:heatmaps both display substantial upregulation of genes related to interferons and inflammation. These two clusters validate the patterns also observed in Guthridge2020’s clusters 1, 4 and 6. All of these upregulated genes are related to the innate immune response. Those patients also have underexpressed B and T cells and normal expression of plasma cells, which would all be overexpressed if production of autoantibodies by plasma cells was the main reason for autoimmunity, rather than interferon levels.

Many of the other PCA and UMAP clusters displayed upregulation of antibody-producing plasma cells; particularly PCA clusters 2, 3, 4 and 5 and UMAP clusters 4, 5, and 6. Guthridge2020 observed a similar trend, where their clusters 2, 3, and 5 had higher T cell, B cell, and plasma cell related expression. While autoantibodies are known to be common in SLE, the diversity of autoantibodies (as discussed in Yaniv2015) means that there is still work to be done understanding what is different among the antibodies produced in these four PCA clusters and three UMAP clusters. Some of these differences might come from genes used to create the clusters that were not included in the modules used for the heatmap visualization.

PCA clusters 1 and 4, UMAP cluster 2, and Autoencoder cluster 5 display a different pattern from many of the other clusters. In these clusters, many of the modules labeled as Undetermined by Chaussabel2008 were underexpressed. A closer look at the genes in these Undetermined modules reveals that they include mitochondrial ribosomal proteins, mitochondrial elongation factors, and proteins in the cAMP-signaling pathway. Mitochondrial ribosomal proteins, in addition to their ribosomal functions, are involved in apoptotic (programmed cell death) pathways (Kim2017), and cAMP signaling regulates mitochondrial apoptosis (Valsecchi2013). Apoptosis is known to be a factor in SLE, but mainly because ineffective clearance of apoptotic cells can expose B and T cells to intracellular material, leading to the creation of autoantibodies against this intracellular material (Mevorach2003).

fig:flowchart illustrates the data analysis steps undertaken in this study. A detailed description is provided in Section 2.

The following specifications were used in the three dimensionality reduction techniques.

a.3 Analyzing Patients with Multiple Samples

For patients who had multiple samples taken, k-means following the autoencoder classified them into the same cluster 97.3% of the time, while k-means following PCA and UMAP classified them into the same cluster 32.9% and 45.7% of the time respectively (fig:same/diff). While gene expression data is correlated with SLE disease activity

(Kegerreis2019; Toro-Dominguez2018), Petri2019 found that the majority of gene expression signatures were stable in patients over time. This suggests that the autoencoder’s dimensionality reduction may have emphasized the stable gene expression signatures, causing them to be a major factor in the clustering, but that PCA and UMAP, which aimed to preserve more of the variance in the data, did not maintain the data from genes whose expression was stable over time. Many of these more stable genes might not have been related to the immune system, so they were not included in  Chaussabel2008’s coexpression modules. Thus, the more variable modules that were in the heatmap would have shown a lot of variation between the patients in each cluster, causing the clusters in the autoencoder heatmap to show a more consistent level of expression across all genes in the modules. Further analysis should be done to determine the level of variation in gene expression in the modules for the autoencoder clusters in comparison to the PCA and UMAP clusters, and to determine whether the PCA and UMAP clusters correlated to disease activity more than the autoencoder clusters, which this idea would imply.