In adversarial interactions, one is often required to make strategic decisions over multiple periods of time, wherein decisions made earlier impact a player's competitive standing as well as how choices are made in later stages. In this paper, we study such scenarios in the context of General Lotto games, which models the competitive allocation of resources over multiple battlefields between two players. We propose a two-stage formulation where one of the players has reserved resources that can be strategically pre-allocated across the battlefields in the first stage. The pre-allocation then becomes binding and is revealed to the other player. In the second stage, the players engage by simultaneously allocating their real-time resources against each other. The main contribution in this paper provides complete characterizations of equilibrium payoffs in the two-stage game, revealing the interplay between performance and the amount of resources expended in each stage of the game. We find that real-time resources are at least twice as effective as pre-allocated resources. We then determine the player's optimal investment when there are linear costs associated with purchasing each type of resource before play begins, and there is a limited monetary budget. 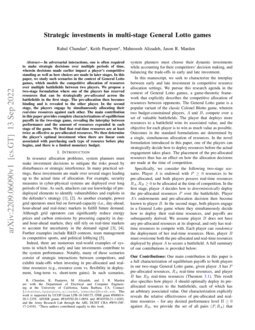 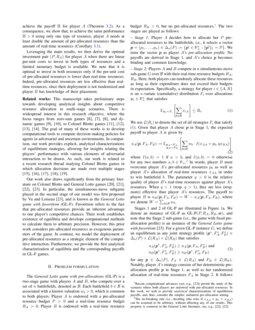 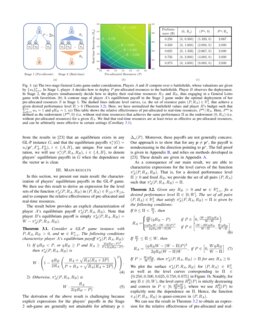 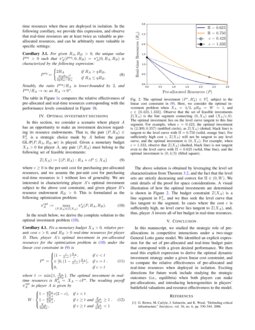 When showing your hand pays off: Announcing strategic intentions in Colonel Blotto games

Renewable resources are starting to constitute a growing portion of the ...
Pan Li, et al. ∙

In resource allocation problems, system planners must make investment decisions to mitigate the risks posed by disturbances or strategic interference. In many practical settings, these investments are made over several stages leading up to the actual time of allocation. For example, security measures in cyber-physical systems are deployed over long periods of time. As such, attackers can use knowledge of pre-deployed elements to identify vulnerabilities and exploits in the defender’s strategy [3, 23]. As another example, power grid operators must bid on forward-capacity (i.e., day-ahead, hour-ahead and real-time) markets to fulfill future demand. Although grid operators can significantly reduce energy prices and carbon emissions by procuring capacity in day- and hour-ahead markets, they still rely on real-time markets to account for uncertainty in the demand signal [2, 14]. Further examples include R&D contests, team management in competitive sports, and political lobbying [22].

Indeed, there are numerous real-world examples of systems in which both early and late investments contribute to the system performance. Notably, many of these scenarios consist of strategic interactions between competitors, and exhibit trade-offs when investing in pre-allocated and real-time resources (e.g., resource costs vs. flexibility in deployment, long-term vs. short-term gains). In such scenarios, system planners must choose their dynamic investments while accounting for their competitors’ decision making, and balancing the trade-offs in early and late investment.

In this manuscript, we seek to characterize the interplay between early and late investment in competitive resource allocation settings. We pursue this research agenda in the context of General Lotto games, a game-theoretic framework that explicitly describes the competitive allocation of resources between opponents. The General Lotto game is a popular variant of the classic Colonel Blotto game, wherein two budget-constrained players, A and B, compete over a set of valuable battlefields. The player that deploys more resources to a battlefield wins its associated value, and the objective for each player is to win as much value as possible. Outcomes in the standard formulations are determined by a single, simultaneous allocation of resources. In the novel formulation introduced in this paper, one of the players can strategically decide how to deploy resources before the actual engagement takes place. The placement of the pre-allocated resources thus has an effect on how the allocation decisions are made at the time of competition.

Leveraging the main results, we then derive the optimal investment pair (P,RA) for player A when there are linear per-unit costs to invest in both types of resources and a limited monetary budget is available. We note that it is optimal to invest in both resources only if the per-unit cost of pre-allocated resources is lower than real-time resources. Indeed, pre-allocated resources are less effective than real-time resources, since their deployment is not randomized and player B has knowledge of their placement.

Related works: This manuscript takes preliminary steps towards developing analytical insights about competitive resource allocation in multi-stage scenarios. There is widespread interest in this research objective, where the focus ranges from zero-sum games [15, 9, 13], and dynamic games [8, 19], to Colonel Blotto games [20, 1, 18, 12]. The goal of many of these works is to develop computational tools to compute decision-making policies for agents in adversarial and uncertain environments. In comparison, our work provides explicit, analytical characterizations of equilibrium strategies, allowing for insights relating the players’ performance with various elements of adversarial interaction to be drawn. As such, our work is related to a recent research thread studying Colonel Blotto games in which allocation decisions are made over multiple stages [10, 7, 6, 16, 4].

Our work also draws significantly from the primary literature on Colonel Blotto and General Lotto games [5, 17, 11, 21]. In particular, the simultaneous-move subgame played in the second stage of our model was first proposed by Vu and Loiseau [21], and is known as the General Lotto game with favoritism (GL-F). Favoritism refers to the fact that pre-allocated resources provide an inherent advantage to one player’s competitive chances. Their work establishes existence of equilibria and develops computational methods to calculate them to arbitrary precision. However, this prior work considers pre-allocated resources as exogenous parameters of the game. In contrast, we model the deployment of pre-allocated resources as a strategic element of the competitive interaction. Furthermore, we provide the first analytical characterization of equilibria and the corresponding payoffs in GL-F games.

– Stage 1: Player A decides how to allocate her P

pre-allocated resources to the battlefields, i.e., it selects a vector

p=(p1,…,pn)∈Δn(P):={p′∈Rn+:∥p′∥1=P}. We term the vector p as player A’s pre-allocation profile. No payoffs are derived in Stage 1, and A’s choice p becomes binding and common knowledge.

– Stage 2: Players A and B compete in a simultaneous-move sub-game G over B with their real-time resource budgets RA, RB. Here, both players can randomly allocate these resources as long as their expenditure does not exceed their budgets in expectation. Specifically, a strategy for player i∈{A,B} is an n-variate (cumulative) distribution Fi over allocations xi∈Rn+ that satisfies

We use L(Ri) to denote the set of all strategies Fi that satisfy (1). Given that player A chose p in Stage 1, the expected payoff to player A is given by

where I(a,b)=1 if a>b, and I(a,b)=0 otherwise for any two numbers a,b∈R+.222The tie-breaking rule (i.e., deciding who wins if xA,b+pb=xB,b) can be assumed to be arbitrary, without affecting any of our results. This property is common in the General Lotto literature, see, e.g., [11, 21]. In words, player B must overcome player A’s pre-allocated resources pb as well as player A’s allocation of real-time resources xA,b in order to win battlefield b. The parameter q>0 is the relative quality of player B’s real-time resources against player A’s resources. When q<1 (resp. q>1), they are less (resp. more) effective than player A’s resources. The payoff to player B is uB(p,FA,FB)=W−uA(p,FA,FB), where we denote W=∑b∈Bwb.

Stages 1 and 2 of GL-P are illustrated in Figure 1a. We denote an instance of GL-P as GL-P(P,RA,RB,w), and note that the Stage 2 sub-game (i.e., the game with fixed pre-allocation profile) is an instance of the General Lotto game with favoritism [21]. For a given GL-P instance G, we define an equilibrium as any joint strategy profile (p∗,F∗A,F∗B)∈Δn(P)×L(RA)×L(RB) that satisfies

for any p∈Δn(P), FA∈L(RA) and FB∈L(RB). Notably, player A’s strategy consists of her deterministic pre-allocation profile p in Stage 1, as well as her randomized allocation of real-time resources FA in Stage 2. It follows from the results in [21] that an equilibrium exists in any GL-P instance G, and that the equilibrium payoffs π∗i(G)=ui(p∗,F∗A,F∗B), i∈{A,B}, are unique. For ease of notation, we will use π∗i(P,RA,RB), i∈{A,B}, to denote players’ equilibrium payoffs in G when the dependence on the vector w is clear.

In this section, we present our main result: the characterization of players’ equilibrium payoffs in the GL-P game. We then use this result to derive an expression for the level sets of the function π∗A(P,RA,RB) in (P,RA)∈R≥0×R≥0, and to compare the relative effectiveness of pre-allocated and real-time resources.

The derivation of the above result is challenging because explicit expressions for the players’ payoffs in the Stage 2 sub-game are generally not attainable for arbitrary p∈Δn(P). Moreover, these payoffs are not generally concave. Our approach is to show that for any p≠p∗, the payoff is nondecreasing in the direction pointing to p∗. The full proof is given in Appendix -B, and relies on methods developed in [21]. These details are given in Appendix -A.

As a consequence of our main result, we are able to characterize expressions for the level curves of the function π∗A(P,RA,RB). That is, for a desired performance level Π≥0 and fixed RB, we provide the set of all pairs (P,RA) such that π∗A(P,RA,RB)=Π.

We can use the result in Theorem III-.2 to obtain an expression for the relative effectiveness of pre-allocated and real-time resources when these are deployed in isolation. In the following corollary, we provide this expression, and observe that real-time resources are at least twice as valuable as pre-allocated resources, and can be arbitrarily more valuable in specific settings:

For given RA,RB>0, the unique value Peq>0 such that π∗A(Peq,0,RB)=π∗A(0,RA,RB) is characterized by the following expression:

The table in Figure 1c compares the relative effectiveness of pre-allocated and real-time resources corresponding with the performance levels considered in Figure 1b.

In this section, we consider a scenario where player A has an opportunity to make an investment decision regarding its resource endowments. That is, the pair (P,RA)∈R2+ is a strategic choice made by A before the game GL-P(P,RA,RB,w) is played. Given a monetary budget XA>0 for player A, any pair (P,RA) must belong to the following set of feasible investments:

where c≥0 is the per-unit cost for purchasing pre-allocated resources, and we assume the per-unit cost for purchasing real-time resources is 1 without loss of generality. We are interested in characterizing player A’s optimal investment subject to the above cost constraint, and given player B’s resource endowment RB>0. This is formulated as the following optimization problem:

In the result below, we derive the complete solution to the optimal investment problem (10).

Fix a monetary budget XA>0, relative per-unit cost c>0, and RB>0 real-time resources for player B. Then, player A’s optimal investment in pre-allocated resources for the optimization problem in (10) under the linear cost constraint in (9) is

where t:=min{1,XAqRB}. The optimal investment in real-time resources is R∗A=XA−cP∗. The resulting payoff πoptA to player A is given by

The above solution is obtained by leveraging the level set characterization from Theorem III-.2, and the fact that the level sets are strictly decreasing and convex for Π∈(0,W). We omit details of the proof for space considerations. A visual illustration of how the optimal investments are determined is shown in Figure 2. The budget constraint I(XA) is a line segment in R2+, and we thus seek the level curve that lies tangent to the segment. In cases where the cost c is sufficiently high, no level curve lies tangent to I(XA), and, thus, player A invests all of her budget in real-time resources.

In this manuscript, we studied the strategic role of pre-allocations in competitive interactions under a two-stage General Lotto game model. We identified an explicit expression for the set of pre-allocated and real-time budget pairs that correspond with a given desired performance. We then used this explicit expression to derive the optimal dynamic investment strategy under a given linear cost constraint, and to compare the relative effectiveness of pre-allocated and real-time resources when deployed in isolation. Exciting directions for future work include studying the strategic outcomes (i.e., equilibria) when both players can make pre-allocations, and introducing heterogeneities in players’ battlefield valuations and resource effectiveness to the model.