The paper proposes a bimodal logic that describes an interplay between distributed knowledge modality and coalition know-how modality. Unlike other similar systems, the one proposed here assumes perfect recall by all agents. Perfect recall is captured in the system by a single axiom. The main technical results are the soundness and the completeness theorems for the proposed logical system. 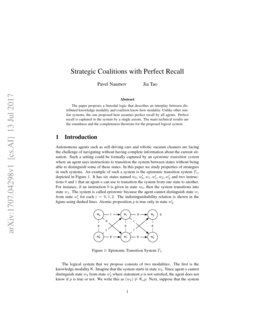 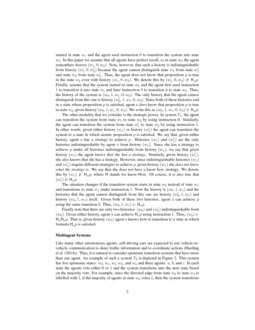 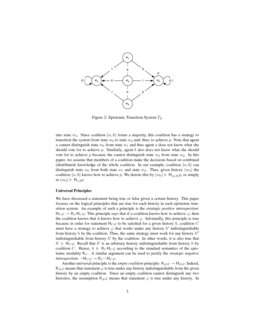 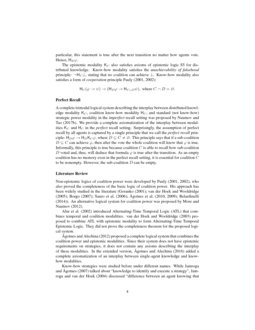 Autonomous agents such as self-driving cars and robotic vacuum cleaners are facing the challenge of navigating without having complete information about the current situation. Such a setting could be formally captured by an epistemic transition system where an agent uses instructions to transition the system between states without being able to distinguish some of these states. In this paper we study properties of strategies in such systems. An example of such a system is the epistemic transition system T1, depicted in Figure 1. It has six states named w0,w′0,w1,w′1,w2,w′2 and two instructions 0 and 1 that an agent a can use to transition the system from one state to another. For instance, if an instruction 0 is given in state w0, then the system transitions into state w1. The system is called epistemic because the agent cannot distinguish state wi from state w′i for each i=0,1,2. The indistinguishability relation is shown in the figure using dashed lines. Atomic proposition p is true only in state w2.

The situation changes if the transition system starts in state w0 instead of state w1 and transitions to state w1 under instruction 1. Now the history is (w0,1,w1) and the histories that the agent cannot distinguish from this one are history (w′0,1,w1) and history (w0,1,w1) itself. Given both of these two histories, agent a can achieve p using the same transition 0. Thus, (w0,1,w1)⊩Hap.

Finally note that there are only two histories: (w0) and (w′0) indistinguishable from (w0). Given either history, agent a can achieve Hap using instruction 1. Thus, (w0)⊩HaHap. That is, given history (w0) agent a knows how to transition to a state in which formula Hap is satisfied.

Like many other autonomous agents, self-driving cars are expected to use vehicle-to-vehicle communication to share traffic information and to coordinate actions [Harding et al.2014]. Thus, it is natural to consider epistemic transition systems that have more than one agent. An example of such a system T2 is depicted in Figure 2.

We have discussed a statement being true or false given a certain history. This paper focuses on the logical principles that are true for each history in each epistemic transition system. An example of such a principle is the strategic positive introspection: HCφ→KCHCφ. This principle says that if a coalition knows how to achieve φ, then the coalition knows that it knows how to achieve φ. Informally, this principle is true because in order for statement HCφ to be satisfied for a given history h, coalition C must have a strategy to achieve φ that works under any history h′ indistinguishable from history h by the coalition. Thus, the same strategy must work for any history h′′ indistinguishable from history h′ by the coalition. In other words, it is also true that h′⊩HCφ. Recall that h′ is an arbitrary history indistinguishable from history h by coalition C. Hence, h⊩KCHCφ according to the standard semantics of the epistemic modality KC. A similar argument can be used to justify the strategic negative introspection: ¬HCφ→KC¬HCφ.

[Ågotnes and Alechina2012] proposed a complete logical system that combines the coalition power and epistemic modalities. Since their system does not have epistemic requirements on strategies, it does not contain any axioms describing the interplay of these modalities. In the extended version, [Ågotnes and Alechina2016] added a complete axiomatization of an interplay between single-agent knowledge and know-how modalities.

Know-how strategies were studied before under different names. While [Jamroga and Ågotnes2007] talked about “knowledge to identify and execute a strategy”, [Jamroga and van der Hoek2004] discussed “difference between an agent knowing that he has a suitable strategy and knowing the strategy itself”. [van Benthem2001] called such strategies “uniform”. [Broersen2008] investigated a related notion of “knowingly doing”, while [Broersen, Herzig, and Troquard2009] studied modality “know they can do”. [Wang2015, Wang2016] captured the “knowing how” as a binary modality in a complete logical system with a single agent and without the knowledge modality.

Coalition know-how strategies for enforcing a condition indefinitely were investigated by [Naumov and Tao2017a]. Such strategies are similar to [Pauly2001, p. 80] “goal maintenance” strategies in “extended coalition logic”. A similar complete logical system in a single-agent setting for know-how strategies to achieve a goal in multiple steps rather than to maintain a goal is developed by [Fervari et al.2017].

In this paper we provide a complete axiomatization of an interplay between modalities KC and HC in the perfect recall setting. The main challenge in proving the completeness, compared to [Ågotnes and Alechina2016, Fervari et al.2017, Naumov and Tao2017b, Naumov and Tao2017a], is the need to construct not only “possible worlds”, but the entire “possible histories”, see the proof of Lemma 22.

The rest of the paper is organized as follows. First, we introduce the syntax and semantics of our logical system. Next, we list the axioms and give examples of proofs in the system. Then, we prove the soundness and the completeness of this system.

We now proceed to describe the formal syntax and semantics of our logical system starting with the definition of a transition system. Although our introductory examples used voting to decide on the next state of the system, in this paper we investigate universal properties of an arbitrary nondeterministic action aggregation mechanism.

A tuple (W,{∼a}a∈A,V,M,π) is called an epistemic transition system, if

Informally, an epistemic transition system is regular if there is at least one next state for each outcome of the vote.

A coalition is a subset of A. A strategy profile of coalition C is any tuple in the set VC.

For each coalition C, relation ∼C is an equivalence relation on the set of epistemic states W. ⊠

For any coalition C, relation =C is an equivalence relation on the set of all strategy profiles of coalitions containing coalition C. ⊠

In this paper we assume that votes of all agents are private. Thus, an individual agent only knows her own votes and the equivalence classes of the states that the system has been at. This is formally captured in the following definition of indistinguishability of histories by an agent.

For any coalition C, relation ≈C is an equivalence relation on the set of histories. ⊠

The length |h| of a history h=(w0,s1,w1,…,sn,wn) is the value of n. By Definition 7, the empty coalition cannot distinguish any two histories, even of different lengths.

Let Φ be the language specified as follows φ:=p|¬φ|φ→φ|KCφ|HCφ, where C⊆A.

Boolean constants ⊥ and ⊤ are defined as usual.

For any history h of an epistemic transition system (W,{∼a}a∈A,V,M,π) and any formula φ∈Φ, let satisfiability relation h⊩φ be defined as follows

In additional to propositional tautologies in language Φ, our logical system consists of the following axioms:

We write ⊢φ if formula φ is provable from the axioms of our logical system using Necessitation, Strategic Necessitation, and Modus Ponens inference rules:

We write X⊢φ if formula φ is provable from the theorems of our logical system and a set of additional axioms X using only Modus Ponens inference rule.

The next lemma follows from a well-known observation that the Positive Introspection axiom is provable from the other axioms of S5.

Proof. Formula ¬KCφ→KC¬KCφ is an instance of the Negative Introspection axiom. Thus, ⊢¬KC¬KCφ→KCφ by the law of contrapositive in the propositional logic. Hence, ⊢KC(¬KC¬KCφ→KCφ) by the Necessitation inference rule. Thus, by the Distributivity axiom and the Modus Ponens inference rule,

At the same time, KC¬KCφ→¬KCφ is an instance of the Truth axiom. Thus, ⊢KCφ→¬KC¬KCφ by contraposition. Hence, taking into account the following instance of the Negative Introspection axiom ¬KC¬KCφ→KC¬KC¬KCφ, one can conclude that ⊢KCφ→KC¬KC¬KCφ. The latter, together with statement (1), implies the statement of the lemma by the laws of propositional reasoning. ⊠

This section contains examples of formal proofs in our logical system. The results obtained here are used in the proof of completeness. The proof of Lemma 7 is based on the one proposed to us by Natasha Alechina.

Proof. By the Positive Strategic Introspection axiom, ⊢HCφ→KCHCφ. Thus, ⊢¬KCHCφ→¬HCφ by the contrapositive. Hence, ⊢KC(¬KCHCφ→¬HCφ) by the Necessitation inference rule. Then, by the Distributivity axiom and the Modus Ponens inference rule ⊢KC¬KCHCφ→KC¬HCφ. Thus, by the Negative Introspection axiom and the laws of propositional reasoning, ⊢¬KCHCφ→KC¬HCφ. Note that ¬HCφ→¬KCHCφ is the contrapositive of the Truth axiom. Therefore, by the laws of propositional reasoning, ⊢¬HCφ→KC¬HCφ. ⊠

Proof. Note that φ→φ is a propositional tautology. Thus, ⊢φ→φ. Hence, ⊢HD∖C(φ→φ) by the Strategic Necessitation inference rule. At the same time, by the Cooperation axiom, ⊢HD∖C(φ→φ)→(HCφ→HDφ) due to the assumption C⊆D. Therefore, ⊢HCφ→HDφ by the Modus Ponens inference rule. ⊠

In this section we prove the following soundness theorem for our logical system.

If ⊢φ, then h⊩φ for each history of each regular epistemic transition system.

Consider strategy profile s of coalition C∪D such that

Strategy profile s is well-defined because coalitions C and D are disjoint. By Definition 9, it suffices to show that for any history h′::s′::w′, if h≈C∪Dh′ and s=C∪Ds′, then h′::s′::w′⊩ψ.

Proof. By Definition 9, assumption h⊩HDφ implies that there is a strategy profile s of coalition D such that for any history h′::s′::w′, if h≈Dh′ and s=Ds′, then h′::s′::w′⊩φ.

h⊮HC⊥ for any history h of any regular epistemic transition system.

By Definition 1, set V contains at least one element v0. Let s′ be a complete strategy profile such that

In the rest of this paper we focus on the completeness theorem for our logical system with respect to the class of regular epistemic transition systems. We start the proof of completeness by fixing a maximal consistent set of formulae X0 and defining a canonical epistemic transition system ETS(X0)=(W,{∼a}a∈A,Φ,M,π) using the “unravelling” technique [Sahlqvist1975]. Note that the domain of choices in the canonical model is the set of all formulae Φ.

The set of epistemic states W consists of all sequences X0,C1,X1,…,Cn,Xn, such that n≥0 and

Proof. Suppose KCφ∉Xk for some k≤n. Let m be the maximal such k. Note that m<n by the assumption KCφ∈Xn of the lemma. Thus, m<m+1≤n.

Proof. We prove the lemma by induction on the distance between n and k. In the base case n=k. Then the assumption KCφ∈Xn implies Xn⊢φ by the Truth axiom. Therefore, φ∈Xn due to the maximality of set Xn.

Suppose that k<n. Assumption KCφ∈Xk implies Xk⊢KCKCφ by Lemma 6. Thus, Xk⊢KCk+1KCφ by the Monotonicity axiom, the condition k<n of the inductive step, and the assumption C⊆Ck+1 of the lemma. Then, KCk+1KCφ∈Xk by the maximality of set Xk. Hence, KCφ∈Xk+1 by Definition 10. Therefore, φ∈Xn by the induction hypothesis. ⊠

Proof. The statement of the lemma follows from Lemma 15 and Lemma 16 as well as Definition 11 because there is a unique path between any two nodes in a tree. ⊠

Next, we specify the aggregation mechanism of the canonical epistemic transition system. Informally, if a coalition has a know-how strategy to achieve φ and all members of the coalition vote for φ, then φ must be true after the transition.

This concludes the definition of the canonical epistemic transition system ETS(X0)=(W,{∼a}a∈A,Φ,M,π). We prove that this system is regular in Lemma 25.

The following technical results (Lemmas 18–22) about the knowledge modality K are used in the proof of completeness.

Proof. Consider the set X={¬φ}∪{ψ|KCψ∈hd(w)}. First, we show that set X is consistent. Assume the opposite. Then, there exist formulae KCψ1,…,KCψn∈hd(w) such that ψ1,…,ψn⊢φ. Thus, KCψ1,…,KCψn⊢KCφ by Lemma 9. Therefore, hd(w)⊢KCφ by the choice of formulae KCψ1,…,KCψn, which contradicts the consistency of the set hd(w) due to the assumption ¬KCφ∈hd(w).