STransE: a novel embedding model of entities and relationships in knowledge bases

Knowledge bases of real-world facts about entities and their relationships are useful resources for a variety of natural language processing tasks. However, because knowledge bases are typically incomplete, it is useful to be able to perform link prediction or knowledge base completion, i.e., predict whether a relationship not in the knowledge base is likely to be true. This paper combines insights from several previous link prediction models into a new embedding model STransE that represents each entity as a low-dimensional vector, and each relation by two matrices and a translation vector. STransE is a simple combination of the SE and TransE models, but it obtains better link prediction performance on two benchmark datasets than previous embedding models. Thus, STransE can serve as a new baseline for the more complex models in the link prediction task. 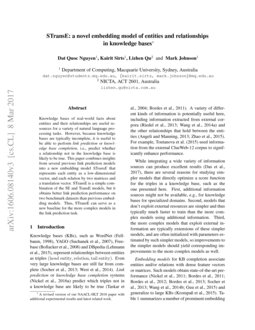 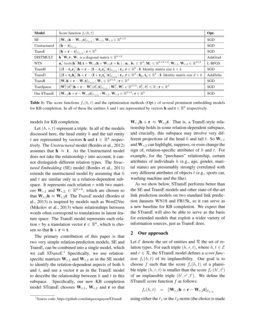 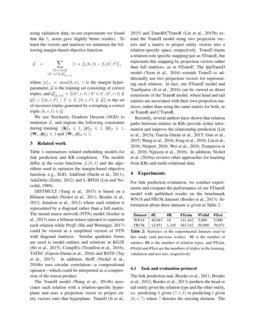 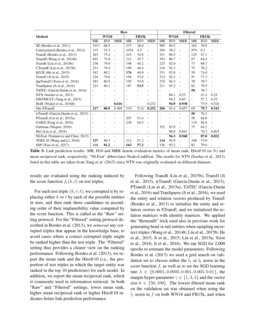 A Systematic Investigation of KB-Text Embedding Alignment at Scale

A Generative Model of Words and Relationships from Multiple Sources

Let (h,r,t) represent a triple. In all of the models discussed here, the head entity h and the tail entity t are represented by vectors h and t∈Rk respectively. The Unstructured model [Bordes et al.2012] assumes that h≈t. As the Unstructured model does not take the relationship r into account, it cannot distinguish different relation types. The Structured Embedding (SE) model [Bordes et al.2011] extends the unstructured model by assuming that h and t are similar only in a relation-dependent subspace. It represents each relation r with two matrices Wr,1 and Wr,2∈Rk×k, which are chosen so that Wr,1h≈Wr,2t. The TransE model [Bordes et al.2013] is inspired by models such as Word2Vec [Mikolov et al.2013] where relationships between words often correspond to translations in latent feature space. The TransE model represents each relation r by a translation vector r ∈Rk, which is chosen so that h+r≈t.

The primary contribution of this paper is that two very simple relation-prediction models, SE and TransE, can be combined into a single model, which we call STransE.111Source code: https://github.com/datquocnguyen/STransE Specifically, we use relation-specific matrices Wr,1 and Wr,2 as in the SE model to identify the relation-dependent aspects of both h and t, and use a vector r as in the TransE model to describe the relationship between h and t in this subspace. Specifically, our new KB completion model STransE chooses Wr,1, Wr,2 and r so that Wr,1h+r≈Wr,2t. That is, a TransE-style relationship holds in some relation-dependent subspace, and crucially, this subspace may involve very different projections of the head h and tail t. So Wr,1 and Wr,2 can highlight, suppress, or even change the sign of, relation-specific attributes of h and t. For example, for the “purchases” relationship, certain attributes of individuals h (e.g., age, gender, marital status) are presumably strongly correlated with very different attributes of objects t (e.g., sports car, washing machine and the like).

As we show below, STransE performs better than the SE and TransE models and other state-of-the-art link prediction models on two standard link prediction datasets WN18 and FB15k, so it can serve as a new baseline for KB completion. We expect that the STransE will also be able to serve as the basis for extended models that exploit a wider variety of information sources, just as TransE does.

Let E denote the set of entities and R the set of relation types. For each triple (h,r,t), where h,t∈E and r∈R, the STransE model defines a score function fr(h,t) of its implausibility. Our goal is to choose f such that the score fr(h,t) of a plausible triple (h,r,t) is smaller than the score fr′(h′,t′) of an implausible triple (h′,r′,t′). We define the STransE score function f as follows:

using either the ℓ1 or the ℓ2-norm (the choice is made using validation data; in our experiments we found that the ℓ1 norm gave slightly better results). To learn the vectors and matrices we minimize the following margin-based objective function:

We use Stochastic Gradient Descent (SGD) to minimize

where each relation is represented by a diagonal rather than a full matrix. The neural tensor network (NTN) model

[Socher et al.2013] uses a bilinear tensor operator to represent each relation while ProjE [Shi and Weninger2017] could be viewed as a simplified version of NTN with diagonal matrices. Similar quadratic forms are used to model entities and relations in KG2E [He et al.2015], ComplEx [Trouillon et al.2016], TATEC [García-Durán et al.2016] and RSTE [Tay et al.2017]. In addition, HolE [Nickel et al.2016b] uses circular correlation—a compositional operator—which could be interpreted as a compression of the tensor product.

associates each relation with a relation-specific hyperplane and uses a projection vector to project entity vectors onto that hyperplane. TransD

[Ji et al.2015] and TransR/CTransR [Lin et al.2015b] extend the TransH model using two projection vectors and a matrix to project entity vectors into a relation-specific space, respectively. TransD learns a relation-role specific mapping just as STransE, but represents this mapping by projection vectors rather than full matrices, as in STransE. The lppTransD model [Yoon et al.2016] extends TransD to additionally use two projection vectors for representing each relation. In fact, our STransE model and TranSparse [Ji et al.2016] can be viewed as direct extensions of the TransR model, where head and tail entities are associated with their own projection matrices, rather than using the same matrix for both, as in TransR and CTransR.

For link prediction evaluation, we conduct experiments and compare the performance of our STransE model with published results on the benchmark WN18 and FB15k datasets [Bordes et al.2013]. Information about these datasets is given in Table 2.

The link prediction task [Bordes et al.2011, Bordes et al.2012, Bordes et al.2013] predicts the head or tail entity given the relation type and the other entity, i.e. predicting h given (?,r,t) or predicting t given (h,r,?) where ? denotes the missing element. The results are evaluated using the ranking induced by the score function fr(h,t) on test triples.

For each test triple (h,r,t), we corrupted it by replacing either h or t by each of the possible entities in turn, and then rank these candidates in ascending order of their implausibility value computed by the score function. This is called as the “Raw” setting protocol. For the “Filtered” setting protocol described in NIPS2013_5071, we removed any corrupted triples that appear in the knowledge base, to avoid cases where a correct corrupted triple might be ranked higher than the test triple. The “Filtered” setting thus provides a clearer view on the ranking performance. Following NIPS2013_5071, we report the mean rank and the Hits@10 (i.e., the proportion of test triples in which the target entity was ranked in the top 10 predictions) for each model. In addition, we report the mean reciprocal rank, which is commonly used in information retrieval. In both “Raw” and “Filtered” settings, lower mean rank, higher mean reciprocal rank or higher Hits@10 indicates better link prediction performance.

. We ran SGD for 2,000 epochs to estimate the model parameters. Following NIPS2013_5071 we used a grid search on validation set to choose either the

Table 3 compares the link prediction results of our STransE model with results reported in prior work, using the same experimental setup. The first 15 rows report the performance of the models that do not exploit information about alternative paths between head and tail entities. The next 5 rows report results of the models that exploit information about relation paths. The last 3 rows present results for the models which make use of textual mentions derived from a large external corpus.

It is clear that the models with the additional external corpus information obtained best results. In future work we plan to extend the STransE model to incorporate such additional information. Table 3 also shows that the models employing path information generally achieve better results than models that do not use such information. In terms of models not exploiting path information or external information, the STransE model produces the highest filtered mean rank on WN18 and the highest filtered Hits@10 and mean reciprocal rank on FB15k. Compared to the closely related models SE, TransE, TransR, CTransR, TransD and TranSparse, our STransE model does better than these models on both WN18 and FB15k.

Table 4 shows that in comparison to prior models not using path information, STransE obtains the second highest Hits@10 result for M-M relation category at (80.1%+83.1%)/2=81.6% which is 0.5% smaller than the Hits@10 result of TranSparse for M-M. However, STransE obtains 2.5% higher Hits@10 result than TranSparse for M-1. In addition, STransE also performs better than TransD for 1-M and M-1 relation categories. We believe the improved performance of the STransE model is due to its use of full matrices, rather than just projection vectors as in TransD. This permits STransE to model diverse and complex relation categories (such as 1-M, M-1 and especially M-M) better than TransD and other similiar models. However, STransE is not as good as TransD for the 1-1 relations. Perhaps the extra parameters in STransE hurt performance in this case (note that 1-1 relations are relatively rare, so STransE does better overall).

This paper presented a new embedding model for link prediction and KB completion. Our STransE combines insights from several simpler embedding models, specifically the Structured Embedding model [Bordes et al.2011] and the TransE model [Bordes et al.2013], by using a low-dimensional vector and two projection matrices to represent each relation. STransE, while being conceptually simple, produces highly competitive results on standard link prediction evaluations, and scores better than the embedding-based models it builds on. Thus it is a suitable candidate for serving as future baseline for more complex models in the link prediction task.

In future work we plan to extend STransE to exploit relation path information in knowledge bases, in a manner similar to lin-EtAl:2015:EMNLP1, guu-miller-liang:2015:EMNLP or NguyenCoNLL2016.

This research was supported by a Google award through the Natural Language Understanding Focused Program, and under the Australian Research Council’s Discovery Projects funding scheme (project number DP160102156).