In this paper we study stochastic quasi-Newton methods for nonconvex stochastic optimization, where we assume that noisy information about the gradients of the objective function is available via a stochastic first-order oracle (SFO). We propose a general framework for such methods, for which we prove almost sure convergence to stationary points and analyze its worst-case iteration complexity. When a randomly chosen iterate is returned as the output of such an algorithm, we prove that in the worst-case, the SFO-calls complexity is O(ϵ^-2) to ensure that the expectation of the squared norm of the gradient is smaller than the given accuracy tolerance ϵ. We also propose a specific algorithm, namely a stochastic damped L-BFGS (SdLBFGS) method, that falls under the proposed framework. Moreover, we incorporate the SVRG variance reduction technique into the proposed SdLBFGS method, and analyze its SFO-calls complexity. Numerical results on a nonconvex binary classification problem using SVM, and a multiclass classification problem using neural networks are reported. 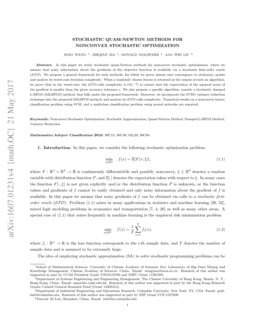 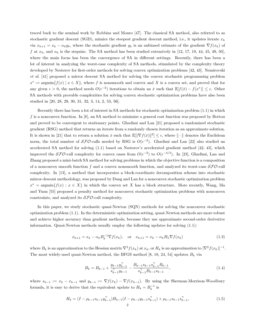 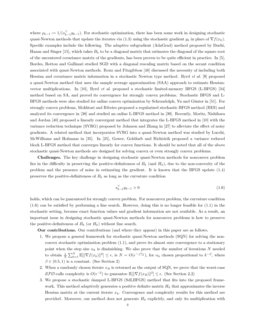 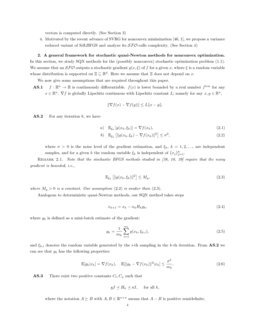 We study a stochastic program where the probability distribution of the ...
Mengmeng Li, et al. ∙

It is well-known that given a smooth, bounded-from-below, and possibly n...
Guy Kornowski, et al. ∙

In this paper, we consider the following stochastic optimization problem:

P, and E[⋅] denotes the expectation taken with respect to ξ. In many cases the function F(⋅,ξ) is not given explicitly and/or the distribution function P is unknown, or the function values and gradients of f cannot be easily obtained and only noisy information about the gradient of f is available. In this paper we assume that noisy gradients of f can be obtained via calls to a stochastic first-order oracle (SFO). Problem (1.1

) arises in many applications in statistics and machine learning

[7, 4, 26] as well as many other areas. A special case of (1.1) that arises frequently in machine learning is the empirical risk minimization problem

is the loss function corresponds to the

i-th sample data, and T denotes the number of sample data and is assumed to be extremely large.

xk via xk+1=xk−αkgk, where the stochastic gradient gk

is an unbiased estimate of the gradient

∇f(xk) of f at xk, and αk is the stepsize. The SA method has been studied extensively in [12, 17, 19, 44, 45, 49, 50], where the main focus has been the convergence of SA in different settings. Recently, there has been a lot of interest in analyzing the worst-case complexity of SA methods, stimulated by the complexity theory developed by Nesterov for first-order methods for solving convex optimization problems [42, 43]. Nemirovski et al. [41] proposed a mirror descent SA method for solving the convex stochastic programming problem x∗:=argmin{f(x)∣x∈X}, where f is nonsmooth and convex and X is a convex set, and proved that for any given ϵ>0, the method needs O(ϵ−2) iterations to obtain an ¯x such that E[f(¯x)−f(x∗)]≤ϵ. Other SA methods with provable complexities for solving convex stochastic optimization problems have also been studied in [20, 28, 29, 30, 31, 32, 3, 14, 2, 53, 56].

Recently there has been a lot of interest in SA methods for stochastic optimization problem (1.1) in which f is a nonconvex function. In [6], an SA method to minimize a general cost function was proposed by Bottou and proved to be convergent to stationary points. Ghadimi and Lan [21] proposed a randomized stochastic gradient (RSG) method that returns an iterate from a randomly chosen iteration as an approximate solution. It is shown in [21] that to return a solution ¯x such that E[∥∇f(¯x)∥2]≤ϵ, where ∥⋅∥ denotes the Euclidean norm, the total number of SFO-calls needed by RSG is O(ϵ−2). Ghadimi and Lan [22] also studied an accelerated SA method for solving (1.1) based on Nesterov’s accelerated gradient method [42, 43], which improved the SFO-call complexity for convex cases from O(ϵ−2) to O(ϵ−4/3). In [23], Ghadimi, Lan and Zhang proposed a mini-batch SA method for solving problems in which the objective function is a composition of a nonconvex smooth function f and a convex nonsmooth function, and analyzed its worst-case SFO-call complexity. In [13], a method that incorporates a block-coordinate decomposition scheme into stochastic mirror-descent methodology, was proposed by Dang and Lan for a nonconvex stochastic optimization problem x∗=argmin{f(x):x∈X} in which the convex set X has a block structure. More recently, Wang, Ma and Yuan [55] proposed a penalty method for nonconvex stochastic optimization problems with nonconvex constraints, and analyzed its SFO-call complexity.

In this paper, we study stochastic quasi-Newton (SQN) methods for solving the nonconvex stochastic optimization problem (1.1). In the deterministic optimization setting, quasi-Newton methods are more robust and achieve higher accuracy than gradient methods, because they use approximate second-order derivative information. Quasi-Newton methods usually employ the following updates for solving (1.1):

where sk−1:=xk−xk−1 and yk−1:=∇f(xk)−∇f(xk−1). By using the Sherman-Morrison-Woodbury formula, it is easy to derive that the equivalent update to Hk=B−1k is

where ρk−1:=1/(s⊤k−1yk−1). For stochastic optimization, there has been some work in designing stochastic quasi-Newton methods that update the iterates via (1.3) using the stochastic gradient gk in place of ∇f(xk). Specific examples include the following. The adaptive subgradient (AdaGrad) method proposed by Duchi, Hazan and Singer [15], which takes Bk

to be a diagonal matrix that estimates the diagonal of the square root of the uncentered covariance matrix of the gradients, has been proven to be quite efficient in practice. In

[5], Bordes, Bottou and Gallinari studied SGD with a diagonal rescaling matrix based on the secant condition associated with quasi-Newton methods. Roux and Fitzgibbon [48] discussed the necessity of including both Hessian and covariance matrix information in a stochastic Newton type method. Byrd et al. [9]

[10], Byrd et al. proposed a stochastic limited-memory BFGS (L-BFGS) [34] method based on SA, and proved its convergence for strongly convex problems. Stochastic BFGS and L-BFGS methods were also studied for online convex optimization by Schraudolph, Yu and Günter in [51]. For strongly convex problems, Mokhtari and Ribeiro proposed a regularized stochastic BFGS method (RES) and analyzed its convergence in [38] and studied an online L-BFGS method in [39]. Recently, Moritz, Nishihara and Jordan [40] proposed a linearly convergent method that integrates the L-BFGS method in [10] with the variance reduction technique (SVRG) proposed by Johnson and Zhang in [27] to alleviate the effect of noisy gradients. A related method that incorporates SVRG into a quasi-Newton method was studied by Lucchi, McWilliams and Hofmann in [35]. In [25], Gower, Goldfarb and Richtárik proposed a variance reduced block L-BFGS method that converges linearly for convex functions. It should be noted that all of the above stochastic quasi-Newton methods are designed for solving convex or even strongly convex problems.

Challenges. The key challenge in designing stochastic quasi-Newton methods for nonconvex problem lies in the difficulty in preserving the positive-definiteness of Bk (and Hk), due to the non-convexity of the problem and the presence of noise in estimating the gradient. It is known that the BFGS update (1.4) preserves the positive-definiteness of Bk as long as the curvature condition

holds, which can be guaranteed for strongly convex problem. For nonconvex problem, the curvature condition (1.6) can be satisfied by performing a line search. However, doing this is no longer feasible for (1.1) in the stochastic setting, because exact function values and gradient information are not available. As a result, an important issue in designing stochastic quasi-Newton methods for nonconvex problems is how to preserve the positive-definiteness of Bk (or Hk) without line search.

In this section, we study SQN methods for the (possibly nonconvex) stochastic optimization problem (1.1). We assume that an SFO outputs a stochastic gradient g(x,ξ) of f for a given x, where ξ is a random variable whose distribution is supported on Ξ⊆Rd. Here we assume that Ξ does not depend on x.

We now give some assumptions that are required throughout this paper.

Note that the stochastic BFGS methods studied in [38, 10, 39] require that the noisy gradient is bounded, i.e.,

where gk is defined as a mini-batch estimate of the gradient:

and ξk,i denotes the random variable generated by the i-th sampling in the k-th iteration. From AS.2 we can see that gk has the following properties:

where the expectation is taken with respect to ξk generated in the computation of gk.

We will not specify how to compute Hk until Section 3, where a specific updating scheme for Hk satisfying both assumptions AS.3 and AS.4 will be proposed.

2.1 Convergence and complexity of SQN with diminishing step size

In this subsection, we analyze the convergence and complexity of SQN under the condition that the step size αk in (2.4) is diminishing. Specifically, in this subsection we assume αk satisfies the following condition:

The following lemma shows that a descent property in terms of the expected objective value holds for SQN. Our analysis is similar to analyses that have been used in [6, 38].

Suppose that {xk} is generated by SQN and assumptions AS.1-4 hold. Further assume that (2.8) holds, and αk≤κ––L¯κ2 for all k. (Note that this can be satisfied if αk is non-increasing and the initial step size α1≤κ––L¯κ2). Then the following inequality holds

where the conditional expectation is taken with respect to ξk.

Taking expectation with respect to ξk on both sides of (2.10) conditioned on xk, we obtain,

Before proceeding further, we introduce the definition of a supermartingale (see [16] for more details).

We are now ready to give convergence results for SQN (Algorithm 2.1).

Suppose that assumptions AS.1-4 hold for {xk} generated by SQN with batch size mk=m for all k. If the stepsize αk satisfies (2.8) and αk≤κ––L¯κ2 for all k, then it holds that

Moreover, there exists a positive constant Mf such that

which further yields that

Assume the same assumptions hold as in Theorem 2.1, and that (2.3) holds. Then

Note that our result in Theorem 2.2 is stronger than the ones given in existing works such as [38] and [39]. Moreover, although Bottou [6] also proves that the SA method for nonconvex stochastic optimization with diminishing stepsize is almost surely convergent to stationary point, our analysis requires weaker assumptions. For example, [6] assumes that the objective function is three times continuously differentiable, while our analysis does not require this. Furthermore, we are able to analyze the iteration complexity of SQN, for a specifically chosen step size αk (see Theorem 2.3 below), which is not provided in [6].

We now analyze the iteration complexity of SQN.

Suppose that assumptions AS.1-4 hold for {xk} generated by SQN with batch size mk=m for all k. We also assume that αk is specifically chosen as

Taking expectation on both sides of (2.9) and summing over k=1,…,N yields

Note that Theorem 2.3 also provides iteration complexity analysis for the classic SGD method, which can be regarded as a special case of SQN with Hk=I. To the best of our knowledge, our complexity result in Theorem 2.3 is new for both SGD and stochastic quasi-Newton methods.

2.2 Complexity of SQN with random output and constant step size

We analyze the SFO-calls complexity of SQN when the output is randomly chosen from {xi}Ni=1, where N is the maximum iteration number. Our results in this subsection are motivated by the randomized stochastic gradient (RSG) method proposed by Ghadimi and Lan [21]. RSG runs SGD for R iterations, where R is a randomly chosen integer from {1,…,N} with a specifically defined probability mass function PR. In [21] it is proved that under certain conditions on the step size and PR, O(1/ϵ2) SFO-calls are needed by SGD to guarantee E[∥∇f(xR)∥2]≤ϵ. We show below that under similar conditions, the same complexity holds for our SQN.

Suppose that assumptions AS.1-4 hold, and that αk in SQN (Algorithm 2.1) is chosen such that 0<αk≤2κ––/(L¯κ2) for all k with αk<2κ––/(L¯κ2) for at least one k. Moreover, for a given integer N, let R be a random variable with the probability mass function

It follows from the definition of PR in (2.24) that

Note that in Theorem 2.4, αk’s are not required to be diminishing, and they can be constant as long as they are upper bounded by 2κ––/(L¯κ2).

We now show that the SFO complexity of SQN with random output and constant step size is O(ϵ−2).

Assume the conditions in Theorem 2.4 hold, and αk=κ––/(LC2u) and mk=m for all k=1,…,N. Let ¯N be the total number of SFO-calls needed to calculate stochastic gradients gk in SQN (Algorithm 2.1). For a given accuracy tolerance ϵ>0, we assume that