We consider a wide range of regularized stochastic minimization problems with two regularization terms, one of which is composed with a linear function. This optimization model abstracts a number of important applications in artificial intelligence and machine learning, such as fused Lasso, fused logistic regression, and a class of graph-guided regularized minimization. The computational challenges of this model are in two folds. On one hand, the closed-form solution of the proximal mapping associated with the composed regularization term or the expected objective function is not available. On the other hand, the calculation of the full gradient of the expectation in the objective is very expensive when the number of input data samples is considerably large. To address these issues, we propose a stochastic variant of extra-gradient type methods, namely Stochastic Primal-Dual Proximal ExtraGradient descent (SPDPEG), and analyze its convergence property for both convex and strongly convex objectives. For general convex objectives, the uniformly average iterates generated by SPDPEG converge in expectation with O(1/√(t)) rate. While for strongly convex objectives, the uniformly and non-uniformly average iterates generated by SPDPEG converge with O((t)/t) and O(1/t) rates, respectively. The order of the rate of the proposed algorithm is known to match the best convergence rate for first-order stochastic algorithms. Experiments on fused logistic regression and graph-guided regularized logistic regression problems show that the proposed algorithm performs very efficiently and consistently outperforms other competing algorithms. 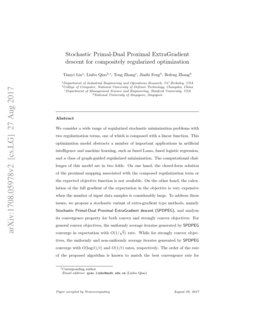 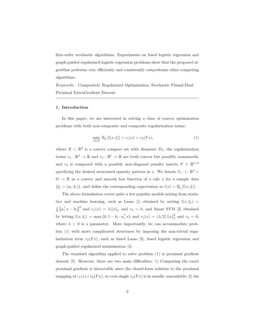 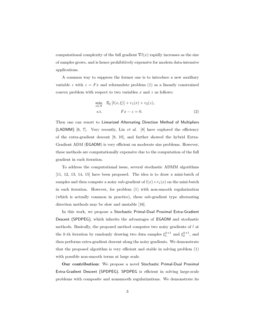 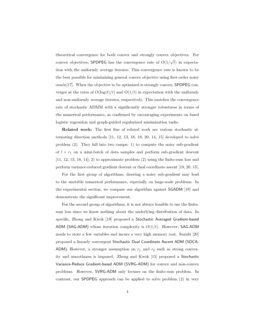 In this paper, we are interested in solving a class of convex optimization problems with both non-composite and composite regularization terms:

where X⊂Rd is a convex compact set with diameter Dx, the regularization terms r1:Rd→R and r2:Rl→R are both convex but possibly nonsmooth, and r2 is composed with a possibly non-diagonal penalty matrix F∈Rl×d specifying the desired structured sparsity pattern in x. We denote l(⋅,⋅):Rd×Ω→R

as a convex and smooth loss function of a rule

x for a sample data {ξi=(ai,bi)}, and define the corresponding expectation as l(x)=Eξ[l(x,ξ)].

The above formulation covers quite a few popular models arising from statistics and machine learning, such as Lasso [25] obtained by setting l(x,ξi)=12∥∥a⊤ix−bi∥∥2 and r1(x)=λ∥x∥1 and r2=0, and linear SVM [5] obtained by letting l(x,ξi)=max(0,1−bi⋅a⊤ix) and r1(x)=(λ/2)∥x∥22 and r2=0, where λ>0 is a parameter. More importantly, we can accommodate problem (1) with more complicated structures by imposing the non-trivial regularization term r2(Fx), such as fused Lasso [26], fused logistic regression and graph-guided regularized minimization [7].

The standard algorithm applied to solve problem (1) is proximal gradient descent [19]. However, there are two main difficulties: 1) Computing the exact proximal gradient is intractable since the closed-form solution to the proximal mapping of r1(x)+r2(Fx), or even single r2(Fx) is in usually unavailable; 2) the computational complexity of the full gradient ∇l(x) rapidly increases as the size of samples grows, and is hence prohibitively expensive for modern data-intensive applications.

A common way to suppress the former one is to introduce a new auxiliary variable z with z=Fx and reformulate problem (1) as a linearly constrained convex problem with respect to two variables x and z as follows:

Then one can resort to Linearized Alternating Direction Method of Multipliers (LADMM) [4, 28]. Very recently, Lin et al. [12] have explored the efficiency of the extra-gradient descent [10, 11], and further showed the hybrid Extra-Gradient ADM (EGADM) is very efficient on moderate size problems. However, these methods are computationally expensive due to the computation of the full gradient in each iteration.

To address the computational issue, several stochastic ADMM algorithms [18, 23, 2, 29, 30] have been proposed. The idea is to draw a mini-batch of samples and then compute a noisy sub-gradient of l(x)+r1(x) on the mini-batch in each iteration. However, for problem (1) with non-smooth regularization (which is actually common in practice), these sub-gradient type alternating direction methods may be slow and unstable [6].

In this work, we propose a Stochastic Primal-Dual Proximal Extra-Gradient Descent (SPDPEG), which inherits the advantages of EGADM and stochastic methods. Basically, the proposed method computes two noisy gradients of l at the k-th iteration by randomly drawing two data samples ξk+11 and ξk+12, and then performs extra-gradient descent along the noisy gradients. We demonstrate that the proposed algorithm is very efficient and stable in solving problem (1) with possible non-smooth terms at large scale.

Our contribution: We propose a novel Stochastic Primal-Dual Proximal Extra-Gradient Descent (SPDPEG). SPDPEG is efficient in solving large-scale problems with composite and nonsmooth regularizations. We demonstrate its theoretical convergence for both convex and strongly convex objectives. For convex objectives, SPDPEG has the convergence rate of O(1/√t) in expectation with the uniformly average iterates. This convergence rate is known to be the best possible for minimizing general convex objective using first-order noisy oracle[1]. When the objective to be optimized is strongly convex, SPDPEG converges at the rates of O(log(t)/t) and O(1/t) in expectation with the uniformly and non-uniformly average iterates, respectively. This matches the convergence rate of stochastic ADMM with a significantly stronger robustness in terms of the numerical performance, as confirmed by encouraging experiments on fused logistic regression and graph-guided regularized minimization tasks.

For the first group of algorithms, drawing a noisy sub-gradient may lead to the unstable numerical performance, especially on large-scale problems. In the experimental section, we compare our algorithm against SGADM [8] and demonstrate the significant improvement.

For the second group of algorithms, it is not always feasible to use the finite-sum loss since we know nothing about the underlying distribution of data. In specific, Zhong and Kwok [31] proposed a Stochastic Averaged Gradient-based ADM (SAG-ADM) whose iteration complexity is O(1/t). However, SAG-ADM needs to store a few variables and incurs a very high memory cost. Suzuki [24] proposed a linearly convergent Stochastic Dual Coordinate Ascent ADM (SDCA-ADM). However, a stronger assumption on r1 and r2 such as strong convexity and smoothness is imposed. Zheng and Kwok [30] proposed a Stochastic Variance-Reduce Gradient-based ADM (SVRG-ADM) for convex and non-convex problems. However, SVRG-ADM only focuses on the finite-sum problem. In contrast, our SPDPEG approach can be applied to solve problem (1) in very general form.

Very recently, a stochastic variant of hybrid gradient method, namely SPDHG [20], has been proposed to solve a class of compositely regularized minimization problems with very special regularization. In specific, r1≡0 and r2(x)=maxy∈Y⟨y,x⟩ (See Assumption 3 in [20]). However, such assumption is very strong and does not hold for many compositely regularized minimization problems. This motivates us to consider problem (1) and develop SPDPEG approach.

We make the following assumptions that are common in optimization literature and usually hold in practice throughout the paper:

The optimal set of problem (1) is nonempty.

l(⋅) is continuously differentiable with Lipschitz continuous gradient. That is, there exists a constant L>0 such that

Assumption 2 holds for many problems in machine learning. For example, the following least squares and logistic functions are two standard ones:

where ξi=(ai,bi) is a single data sample.

The regularization functions r1 and r2 are both continuous but possibly non-smooth; the associated proximal mapping for each individual regularization admits a closed-form solution, i.e.,

can be calculated in a closed form for i=1,2.

We remark that Assumption 3 is reasonable for a class of optimization problems regularized by ℓ1-norm or nuclear norm, such as fused Lasso, fused logistic regression, and graph-guided regularized minimization problems. The proximal mapping of ℓ1-norm can be computed as follows:

The gradient of the objective function l(x)

is easy to estimate. Any stochastic gradient estimation

where σ>0 is a constant number.

l(⋅) is μ-strongly convex at x. In other words, there exists a constant μ>0 such that

We remark that our algorithm works even without Assumption 6. However, the lower iteration complexity will be obtained with Assumption 6.

We introduce the Stochastic Primal-Dual Proximal ExtraGradient (SPDPEG) method, and further discuss the choice of step-size. We define the augmented Lagrangian function for problem (1) as

where λ∈Rp is the dual variable associated with Fx=z. ϕ is defined as

The SPDPEG algorithm is based on the primal-dual update scheme where (z,x) is primal variable and λ is a dual variable, and can be seen as an inexact augmented Lagrangian method. The details are presented in Algorithm 1.

We provide details on following four important issues: how to solve the primal and dual sub-problems easily, how to apply the noisy gradient and perform extra-gradient descent, how to choose step-size, and how to determine the weights for the non-uniformly average iterates.

In this section, we present the main result in this paper. For general convex objectives, the uniformly average iterates generated by the SPDPEG algorithm converge in expectation with O(1/√t) rate. While for strongly convex objectives, the uniformly and non-uniformly average iterates generated converge in expectation with O(log(t)/t) and O(1/t) rates, respectively. The computational complexity are O(d/√t), O(dlog(t)/t) and O(d/t) since the per-iteration complexity is the computational cost of the noisy gradient on ξ1 and ξ2 and the proximal mapping, where d is the dimension of decision variable. The main theoretic results with respect to different settings are summarized as follows:

In the above, ~L is defined as

denotes the largest eigenvalue of

F⊤F, and μ=0 when l is a general convex objective function.

We present the main theoretic result for uniformly average iterates under general convex objective functions in the following theorem.

Consider the SPDPEG algorithm with uniformly average iterates. For any optimal solution (z∗,x∗), it holds that

Note that this implies that the SPDPEG algorithm converges in expectation with the O(1/√t) rate in terms of both the objective error and constraint violation.

We present the main theoretic result for uniformly average iterates under a strongly convex objective function in the following theorem.

Consider the SPDPEG algorithm with uniformly average iterates. For any optimal solution (z∗,x∗), it holds that

Note that this implies that the SPDPEG algorithm converges in expectation with the O(log(t)/t) rate in terms of both the objective error and constraint violation.

We present the main theoretic result for non-uniformly average iterates under a strongly convex objective function in the following theorem.

Consider the SPDPEG algorithm with non-uniformly average iterates. For any optimal solution (z∗,x∗), it holds that

Note that this implies that the SPDPEG algorithm converges in expectation with the O(1/t) rate in terms of both the objective error and constraint violation.

We first prove the key technical lemma which is very important to the proof of Theorem 7-Theorem 9.

The sequence {zk+1,¯xk+1,¯λk+1,xk+1,λk+1} generated by the SPDPEG algorithm satisfies the following inequality:

where δk+1 and ¯δk+1 are respectively denoted by

For ¯xk+1,xk+1∈X and any x∈X, the first-order optimality condition for updating ¯xk+1 and xk+1 are given respectively by

where the first inequality is obtained by letting x=xk+1 in (18) and the second inequality follows from (20). Furthermore, we have

On the other hand, we have

where the last inequality holds since

Therefore, we conclude that