We present two new remarkably simple stochastic second-order methods for minimizing the average of a very large number of sufficiently smooth and strongly convex functions. The first is a stochastic variant of Newton's method (SN), and the second is a stochastic variant of cubically regularized Newton's method (SCN). We establish local linear-quadratic convergence results. Unlike existing stochastic variants of second order methods, which require the evaluation of a large number of gradients and/or Hessians in each iteration to guarantee convergence, our methods do not have this shortcoming. For instance, the simplest variants of our methods in each iteration need to compute the gradient and Hessian of a single randomly selected function only. In contrast to most existing stochastic Newton and quasi-Newton methods, our approach guarantees local convergence faster than with first-order oracle and adapts to the problem's curvature. Interestingly, our method is not unbiased, so our theory provides new intuition for designing new stochastic methods. 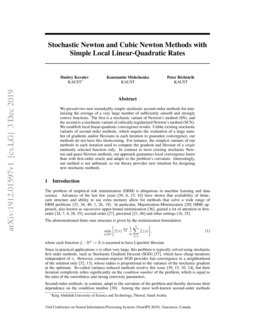 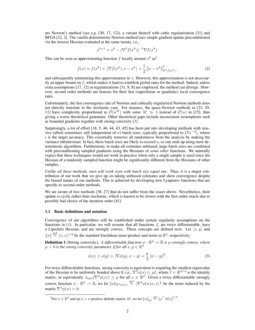 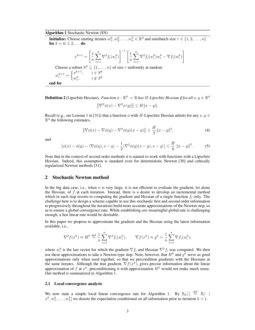 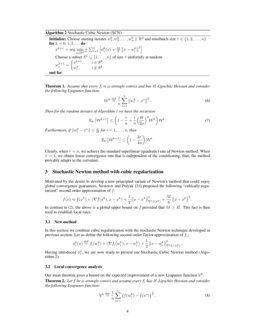 The problem of empirical risk minimization (ERM) is ubiquitous in machine learning and data science. Advances of the last few years

The aforementioned finite-sum structure is given by the minimization formulation

where each function fi:Rd→R is assumed to have Lipschitz Hessian.

Since in practical applications n

Robbins and Monro (1951), which have cheap iterations independent of n. However, constant-stepsize SGD provides fast convergence to a neighborhood of the solution only Nguyen et al. (2018); Gower et al. (2019)

, whose radius is proportional to the variance of the stochastic gradient at the optimum. So-called variance-reduced methods resolve this issue

Roux et al. (2012); Johnson and Zhang (2013); Gorbunov et al. (2019); Hanzely and Richtárik (2019), but their iteration complexity relies significantly on the condition number of the problem, which is equal to the ratio of the smoothness and strong convexity parameters.

Second-order methods, in contrast, adapt to the curvature of the problem and thereby decrease their dependence on the condition number Nesterov (2004). Among the most well-known second-order methods are Newton’s method (see e.g. Nesterov (2004); Karimireddy et al. (2018); Gower et al. (2019)), a variant thereof with cubic regularization Nesterov and Polyak (2006) and BFGS Liu and Nocedal (1989); Avriel (2003). The vanilla deterministic Newton method uses simple gradient update preconditioned via the inverse Hessian evaluated at the same iterate, i.e.,

This can be seen as approximating function f locally around xk as111For x∈Rd and an n×n positive definite matrix M, we let ∥x∥Mdef=(x⊤Mx)1/2.

and subsequently minimizing this approximation in x. However, this approximation is not necessarily an upper bound on f, which makes it hard to establish global rates for the method. Indeed, unless extra assumptions Karimireddy et al. (2018); Gower et al. (2019) or regularizations Nesterov and Polyak (2006); Doikov and Richtárik (2018); Doikov and Nesterov (2019) are employed, the method can diverge. However, second order methods are famous for their fast (superlinear or quadratic) local convergence rates.

Unfortunately, the fast convergence rate of Newton and cubically regularized Newton methods does not directly translate to the stochastic case. For instance, the quasi-Newton methods in Luo et al. (2016); Moritz et al. (2016); Gower et al. (2016) have complexity proportional to O(κM) with some M≫1 instead of O(κ) in Johnson and Zhang (2013), thus giving a worse theoretical guarantee. Other theoretical gaps include inconsistent assumptions such as bounded gradients together with strong convexity Berahas et al. (2016) .

Surprisingly, a lot of effort Kohler and Lucchi (2017); Bollapragada et al. (2018); Zhou et al. (2018); Zhang et al. (2018); Tripuraneni et al. (2018); Zhou and Gu (2019) has been put into developing methods with massive (albeit sometimes still independent of n) batch sizes, typically proportional to O(ϵ−2), where ϵ is the target accuracy. This essentially removes all randomness from the analysis by making the variance infinitesimal. In fact, these batch sizes are likely to exceed n

, so one ends up using mere deterministic algorithms. Furthermore, to make all estimates unbiased, large batch sizes are combined with preconditioning sampled gradients using the Hessians of

some other functions. We naturally expect that these techniques would not work in practice when only a single sample is used since the Hessian of a randomly sampled function might be significantly different from the Hessians of other samples.

Unlike all these methods, ours will work even with batch size equal one.

Thus, it is a major contribution of our work that we give up on taking unbiased estimates and show convergence despite the biased nature of our methods. This is achieved by developing new Lyapunov functions that are specific to second-order methods.

We are aware of two methods Rodomanov and Kropotov (2016); Mokhtari et al. (2018a) that do not suffer from the issues above. Nevertheless, their update is cyclic rather than stochastic, which is known to be slower with the first-order oracle due to possibly bad choice of the iteration order Safran and Shamir (2019).

Convergence of our algorithms will be established under certain regularity assumptions on the functions in (1). In particular, we will assume that all functions fi are twice differentiable, have a Lipschitz Hessian, and are strongly convex. These concepts are defined next. Let ⟨x,y⟩ and ∥x∥def=⟨x,x⟩1/2 be the standard Euclidean inner product and norm in Rd, respectively.

A differentiable function ϕ:Rd→R is μ-strongly convex, where μ>0 is the strong convexity parameter, if for all x,y∈Rd

For twice differentiable functions, strong convexity is equivalent to requiring the smallest eigenvalue of the Hessian to be uniformly bonded above 0, i.e.,

is the identity matrix, or equivalently

λmin(∇2ϕ(x))≥μ for all x∈Rd. Given a twice differentiable strongly convex function ϕ:Rd→R, we let ∥x∥∇2ϕ(w)def=⟨∇2ϕ(w)x,x⟩12 be the norm induced by the matrix ∇2ϕ(w)≻0.

Recall (e.g., see Lemma 1 in Nesterov and Polyak (2006)) that a function ϕ with H-Lipschitz Hessian admits for any x,y∈Rd the following estimates,

Note that in the context of second order methods it is natural to work with functions with a Lipschitz Hessian. Indeed, this assumption is standard even for deterministic Newton Nesterov (2004) and cubically regularized Newton methods Nesterov and Polyak (2006).

In the big data case, i.e., when n is very large, it is not efficient to evaluate the gradient, let alone the Hessian, of f at each iteration. Instead, there is a desire to develop an incremental method which in each step resorts to computing the gradient and Hessian of a single function fi only. The challenge here is to design a scheme capable to use this stochastic first and second order information to progressively throughout the iterations build more accurate approximations of the Newton step, so as to ensure a global convergence rate. While establishing any meaningful global rate is challenging enough, a fast linear rate would be desirable.

In this paper we propose to approximate the gradient and the Hessian using the latest information available, i.e.,

is the last vector for which the gradient

∇fi and Hessian ∇2fi was computed. We then use these approximations to take a Newton-type step. Note, however, that Hk and gk serve as good approximations only when used together, so that we precondition gradients with the Hessians at the same iterates. Although the true gradient, ∇f(xk), gives precise information about the linear approximation of f at xk, preconditioning it with approximation Hk would not make much sense. Our method is summarized in Algorithm 1.

We now state a simple local linear convergence rate for Algorithm 1. By Ek[⋅]def=E[⋅∣xk,wk1,…,wkn] we denote the expectation conditioned on all information prior to iteration k+1.

Assume that every fi is μ-strongly convex and has H-Lipschitz Hessian and consider the following Lyapunov function:

Clearly, when τ=n, we achieve the standard superlinear (quadratic) rate of Newton method. When τ=1, we obtain linear convergence rate that is independent of the conditioning, thus, the method provably adapts to the curvature.

Motivated by the desire to develop a new principled variant of Newton’s method that could enjoy global convergence guarantees, Nesterov and Polyak Nesterov and Polyak (2006) proposed the following “cubically regularized” second-order approximation of f:

In contrast to (2), the above is a global upper bound on f provided that M≥H. This fact is then used to establish local rates.

In this section we combine cubic regularization with the stochastic Newton technique developed in previous section. Let us define the following second-order Taylor approximation of fi:

Having introduced ϕki, we are now ready to present our Stochastic Cubic Newton method (Algorithm 2).

Our main theorem gives a bound on the expected improvement of a new Lyapunov function Vk.

Let f be μ-strongly convex and assume every fi has H-Lipschitz Hessian and consider the following Lyapunov function:

Again, with τ=n we recover local superlinear convergence of cubic Newton. In addition, this rate is locally independent of the problem conditioning, showing that we indeed benefit from second-order information.

Appendix A Proofs for Algorithm 1

Let fi be μ-strongly convex and have H-Lipschitz Hessian for all i=1,…,n. Then the iterates of Algorithm 1 satisfy

Letting Hkdef=1n∑ni=1∇2fi(wki), one step of the method can be written in the form

Subtracting x⋆=(Hk)−1Hkx⋆ from both sides, and using the fact that ∑ni=1∇fi(x⋆)=0, this further leads to

Next, note that since fi is μ strongly convex, we have ∇2fi(wki)⪰μI for all i. It implies that Hk⪰μI, which in turns gives

The rest of the proof follows similar reasoning as in the standard convergence proof of Newton’s method, with only small modifications:

Assume that each fi is μ-strongly convex and has H-Lipschitz Hessian. If ∥w0i−x⋆∥≤μH for i=1,…,n, then for all k,

The upper bound on Wk then follows immediately.

The random iterates of Algorithms 1 and 2 satisfy the identity

Using Lemma 1 and Lemma 3, we obtain

where in the last step we have also used the assumption on ∥w0i−x⋆∥ for i=1,…,n. ∎

Appendix B Proofs for Algorithm 2

Let each fi have H-Lipschitz Hessian and choose M≥H. Then,

We begin by establishing an upper bound for f:

where the last equation follows from the definition of xk+1. We can further upper bound every ϕki using (???) to obtain

Let f be μ-strongly convex, fi have H-Lipschitz Hessian for every i and choose M≥H. Then

The result readily follows from combining Lemma 4 and strong convexity of f. Indeed, we have

Denote for convenience Cdef=√2(M+H)3μ3/2. The lemma’s claim follows as a corollary of a stronger statement, that for any i and k we have with probability 1

Let us show it by induction in k, where for k=0 it is satisfied by our assumptions. If i∉Sk, wk+1i=wki and the induction assumption gives the step. Let i∈Sk and, then

The following equality holds for all k

Denote Cdef=√2(M+H)3μ3/2. By combining the results from our lemmas, we can show

In this section, we consider fitting a generalized linear model (GLM) with ℓ2 regularization, i.e. solving

Let us define for convenience

Then we can shorten the update rule for xk+1 to xk+1=Bk(hk+λxk−(gk+λxk))=Bk(hk−gk). Our key observation is that updates of Bk, gk and hk are very cheap both in terms of memory and compute.

First, it is evident that to update gk it is sufficient to maintain in memory only αkidef=ϕ′i(a⊤iwki). Similarly, for hk we do not need to store the Hessians explicitly and can use instead βkidef=ϕ′′i(a⊤iwki) and γkidef=a⊤iwki. Then

be an invertible matrix and

u,v∈Rd be arbitrary two vectors such that 1+u⊤H−1v≠0, then we have

Thus, the complexity of each update of Algorithm 3 is O(d2), which is much faster than solving linear system from the update of Newton method.