Threshold theorem is probably the most important development of mathematical epidemic modelling. Unfortunately, some models may not behave according to the threshold. In this paper, we will focus on the final outcome of SIR model with demography. The behaviour of the model approached by deteministic and stochastic models will be introduced, mainly using simulations. Furthermore, we will also investigate the dynamic of susceptibles in population in absence of infective. We have successfully showed that both deterministic and stochastic models performed similar results when R_0 ≤ 1. That is, the disease-free stage in the epidemic. But when R_0 > 1, the deterministic and stochastic approaches had different interpretations. 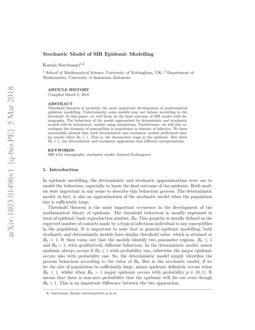 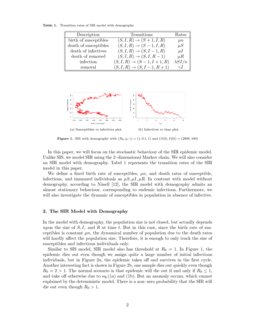 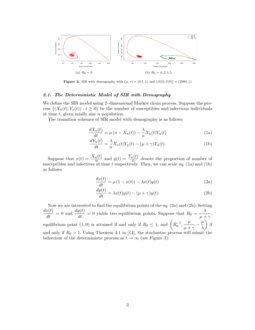 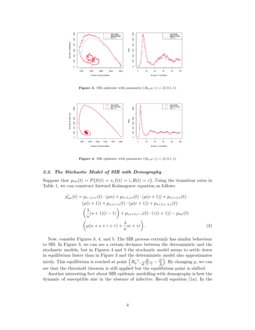 Threshold theorem is the most important occurence in the development of the mathematical theory of epidemic. The threshold behaviour is usually expressed in term of epidemic basic reproduction number, R0. This quantity is usually defined as the expected number of contacts made by a typical infectious individual to any susceptibles in the population. It is important to note that in general epidemic modelling, both stochastic and deterministic models have similar threshold value, which is attained at R0=1. It then turns out that the models identify two parameter regions, R0≤1 and R0>1, with qualitatively different behaviour. In the deterministic model, minor epidemic always occurs if R0≤1 with probability one, otherwise the major epidemic occurs also with probability one. So, the deterministic model simply identifies the process behaviour according to the value of R0. But in the stochastic model, if we let the size of population be sufficiently large, minor epidemic definitely occurs when R0≤1, whilst when R0>1 major epidemic occurs with probability p∈(0,1). It means that there is non-zero probability that the epidemic will die out even though R0>1. This is an important difference between the two approaches.

In this paper, we will focus on the stochastic behaviour of the SIR epidemic model. Unlike SIS, we model SIR using the 2–dimensional Markov chain. We will also consider an SIR model with demography. Tabel

1 represents the transition rates of the SIR model in this paper.

We define a fixed birth rate of susceptibles, μn, and death rates of susceptible, infectious, and immuned individuals as μS,μI,μR. In contrast with model without demography, according to Nåsell [12], the SIR model with demography admits an almost stationary behaviour, corresponding to endemic infectious. Furthermore, we will also investigate the dynamic of susceptibles in population in absence of infective.

2 The SIR Model with Demography

Similar to SIS model, SIR model also has threshold at R0=1. In Figure 1, the epidemic dies out even though we assign quite a large number of initial infectious individuals, but in Figure 2a, the epidemic takes off and survives in the first cycle. Another interesting fact is shown in Figure 2b, one sample dies out quickly even though R0=2>1. The normal scenario is that epidemic will die out if and only if R0≤1, and take off otherwise due to eq.(1a) and (1b). But an anomaly occurs, which cannot explained by the deteministic model. There is a non–zero probability that the SIR will die out even though R0>1.

2.1 The Deterministic Model of SIR with Demography

We define the SIR model using 2–dimensional Markov chain process. Suppose the process {(Xn(t),Yn(t)):t≥0} be the number of susceptibles and infectious individuals at time t, given inially size n population.

The transition schemes of SIR model with demography is as follows

Suppose that x(t)=Xn(t)n and y(t)=Yn(t)n denote the proportion of number of susceptibles and infectives at time t respectively. Then, we can scale eq. (1a) and (1b) as follows

2.2 The Stichastic Model of SIR with Demography

Suppose that psir(t)=P{S(t)=s,I(t)=i,R(t)=r}. Using the transition rates in Table 1, we can construct forward Kolmogorov equation as follows

Now, consider Figures 3, 4, and 5. The SIR process certainly has similar behaviour to SIS. In Figure 3, we can see a certain deviance between the deterministic and the stochastic models, but in Figures 4 and 5 the stochastic model seems to settle down in equilibrium faster than in Figure 3 and the deterministic model also approximates nicely. This equilibrium is reached at point (R−10,μμ+γ−μλ). By changing μ, we can see that the threshold theorem is still applied but the equilibrium point is shifted.

We know that when R0>1, there is possibility that the epidemic will die out very quickly. Suppose that the epidemic survives and m=1. Then, in the early stage of epidemic, we can approximate the process of infection using the birth– death process with birth rate λx(t) and death rate (γ+μ). Suppose that pi(t) denotes the probability Yn(t)=i. Then, the modified forward Kolmogorov equation in (3) becomes

From the equation (3), the time to extinction of the SIR epidemic must satisfy the differential equation

The solution of eq. (4) can be seen in Kendall [11] Now consider Figure 6. When we set R0>1, there are essentially two behaviours we should notice. First, given the small proportion of initial infectious individuals the infection may die out very quickly as in Figure 6. Second, if it survives, then it will enter endemic level at some t as we can see in Figures 3, 4, and 5, where the osilation around the deterministic model becomes damped and the process is now mimicking the deterministic version.

2.3 The Probability of Extinction when R0>1

[14]. Now, we need to show that there is non–zero probability that the process will die out even though R0>1.

and it must satisfy

Now, by differentiating equation (9) with respect to t and z and then substituting to equation (7), yields

Note that if we let R0=λ(t)γ+μ>1, then equation (LABEL:eq:sir.final.prob.ext) lays in (0,1). This explains mathematically the extinction in Figure 6 and also supports the branching process theory. Otherwise, by letting R0≤1, and if we let t→∞, then (1+(γ+μ)∫t0eρ(t)du)→∞. Consequently, p0(t)→1 as t→∞. This result is not surprising since we have already known that when R0≤1, the stable stage of the epidemic process is attained in the disease-free stage.

According to the threshold theorem, epidemic can only occur if the initial number of susceptibles is larger than some critical value, which depends on the parameters under consideration (Ball, 1983). Usually, it is expressed in terms of epidemic reproductive ratio number, R0. This quantity is defined as the expected number of contacts made by a typical infective to susceptibles in the population.

We have successfully showed that both deterministic and stochastic models performed similar results when R0≤1. That is, the disease-free stage in the epidemic. But when R0>1, the deterministic and stochastic approaches had different interpretations. In the deterministic models, both the SIS and SIR models showed an outbreak of the disease and after some time t, the disease persisted and reached endemic-equilibrium stage. The stochastic models, on the other hands, had different interpretations. If we let the population size be sufficiently large, the epidemic might die out or survive. There were essentially two stages to this model. First, the infection might die out in the first cycle. If it did, then it would happen very quickly, just like the branching process theory described. Second, if it survived the first cycle, the outbreak was likely to occur, but after some time t, it would reach equilibrium just like the deterministic version. In fact, the stochastic models would mimic the deterministic’s paths and be scattered randomly around their equilibrium point.