In this paper we propose stochastic gradient-free methods and gradient-free methods with momentum for solving stochastic optimization problems. Our fundamental idea is not to directly evaluate and apply gradients but to indirectly learn information about gradients through stochastic directions and corresponding output feedbacks of the objective function, so that it might be possible to further broaden the scope of applications. Without using gradients, these methods still maintain the sublinear convergence rate O(1/k) with a decaying stepsize α_k= O(1/k) for the strongly convex objectives with Lipschitz gradients, and converge to a solution with a zero expected gradient norm when the objective function is nonconvex, twice differentiable and bounded below. In addition, we provide a theoretical analysis about the inclusion of momentum in stochastic settings, which shows that the momentum term introduces extra biases but reduces variances for stochastic directions. 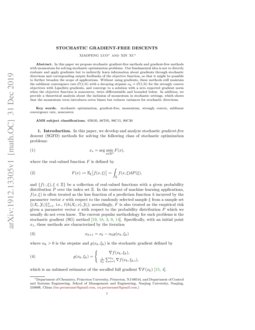 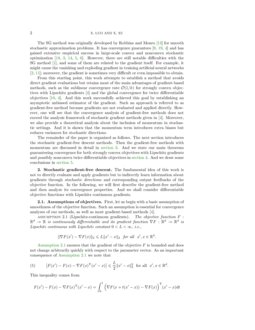 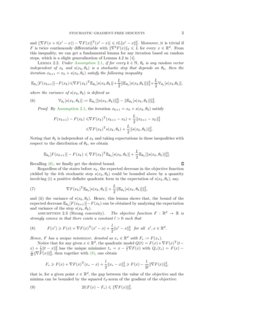 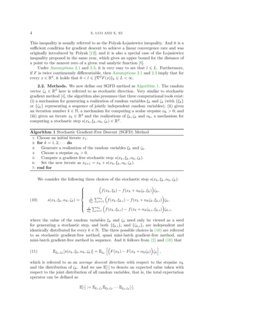 Random-reshuffled SARAH does not need a full gradient computations

A Unified Analysis of Stochastic Momentum Methods for Deep Learning

In this paper, we develop and analyze stochastic gradient-free descent (SGFD) methods for solving the following class of stochastic optimization problems:

where the real-valued function F is defined by

P over the index set Ξ

. In the context of machine learning applications,

is often treated as the loss function of a prediction function

incurred by the parameter vector

x with respect to the randomly selected sample ξ from a sample set {(Xi,Yi)}ni=1, i.e., ℓ(h(Xi;x),Yi); accordingly, F is also treated as the empirical risk given a parameter vector x with respect to the probability distribution P which we usually do not even know. The current popular methodology for such problems is the stochastic gradient (SG) method [19, 18, 3, 9, 14]. Specifically, with an initial point x1, these methods are characterized by the iteration

which is an unbiased estimator of the socalled full gradient

The SG method was originally developed by Robbins and Monro [13] for smooth stochastic approximation problems. It has convergence guarantees [9, 19, 4] and has gained extensive empirical success in large-scale convex and nonconvex stochastic optimization [18, 3, 14, 5, 6]. However, there are still notable difficulties with the SG method [1]

, and some of them are related to the gradient itself. For example, it might cause the vanishing and exploding gradient in training artificial neural networks

[2, 11]; moreover, the gradient is sometimes very difficult or even impossible to obtain.

From this starting point, this work attempts to establish a method that avoids direct gradient evaluations but retains most of the main advantages of gradient-based methods, such as the sublinear convergence rate O(1/k) for strongly convex objectives with Lipschitz gradients [4] and the global convergence for twice differentiable objectives [10, 4]. And this work successfully achieved this goal by establishing an asymptotic unbiased estimator of the gradient. Such an approach is referred to as gradient-free method because gradients are not evaluated and applied directly. However, one will see that the convergence analysis of gradient-free methods does not exceed the analysis framework of stochastic gradient methods given in [4]. Moreover, we also provide a theoretical analysis about the inclusion of momentum in stochastic settings. And it is shown that the momentum term introduces extra biases but reduces variances for stochastic directions.

The remainder of the paper is organized as follows. The next section introduces the stochastic gradient-free descent methods. Then the gradient-free methods with momentum are discussed in detail in Section 3. And we state our main theorems guaranteeing convergence for both strongly convex objectives with Lipschitz gradients and possibly nonconvex twice differentiable objectives in Section 4. And we draw some conclusions in Section 5.

The fundamental idea of this work is not to directly evaluate and apply gradients but to indirectly learn information about gradients through stochastic directions and corresponding output feedbacks of the objective function. In the following, we will first describe the gradient-free method and then analyze its convergence properties. And we shall consider differentiable objective functions with Lipschitz continuous gradients.

First, let us begin with a basic assumption of smoothness of the objective function. Such an assumption is essential for convergence analyses of our methods, as well as most gradient-based methods [4]. [Lipschitz-continuous gradients] The objective function F:Rd→R is continuously differentiable and its gradient function ∇F:Rd→Rd is Lipschitz continuous with Lipschitz constant 0<L<∞, i.e.,

Section 2.1 ensures that the gradient of the objective F is bounded and does not change arbitrarily quickly with respect to the parameter vector. As an important consequence of Section 2.1 we note that

This inequality comes from

and |[∇F(x+t(x′−x))−∇F(x)]T(x′−x)|⩽tL∥x′−x∥22. Moreover, it is trivial if F is twice continuously differentiable with ∥∇2F(x)∥2⩽L for every x∈Rd. From this inequality, we can get a fundamental lemma for any iteration based on random steps, which is a slight generalization of Lemma 4.2 in [4].

Under Section 2.1, if for every k∈N, θk is any random vector independent of xk and s(xk,θk) is a stochastic step that depends on θk, then the iteration xk+1=xk+s(xk,θk) satisfy the following inequality

where the variance of s(xk,θk) is defined as

Noting that θk is independent of xk and taking expectations in these inequalities with respect to the distribution of θk, we obtain

Recalling Eq. 6, we finally get the desired bound. ■

Regardless of the states before xk, the expected decrease in the objective function yielded by the kth stochastic step s(xk,θk) could be bounded above by a quantity involving (i) a positive definite quadratic form in the expectation of s(xk,θk), say,

and (ii) the variance of s(xk,θk). Hence, this lemma shows that, the bound of the expected decrease Eθk[F(xk+1)]−F(xk) can be obtained by analyzing the expectation and variance of the step s(xk,θk).

[Strong convexity] The objective function F:Rd→R is strongly convex in that there exists a constant l>0 such that

Hence, F has a unique minimizer, denoted as x∗∈Rd with F∗:=F(x∗).

This inequality is usually referred to as the Polyak-Łojasiewicz inequality. And it is a sufficient condition for gradient descent to achieve a linear convergence rate and was originally introduced by Polyak [12]; and it is also a special case of the Łojasiewicz inequality proposed in the same year, which gives an upper bound for the distance of a point to the nearest zero of a given real analytic function [8].

We now define our SGFD method as Algorithm 1. The random vector ζk∈Rd here is referred to as stochastic direction. Very similar to stochastic gradient method [4]

, the algorithm also presumes that three computational tools exist: (i) a mechanism for generating a realization of random variables

We consider the following three choices of the stochastic step s(xk,ξk,αk,ζk):

which is referred to as an average descent direction with respect to the stepsize αk and the distribution of ζk. And we use E[⋅]

to denote an expected value taken with respect to the joint distribution of all random variables, that is, the total expectation operator can be defined as

Correspondingly, when the objective function F is able and easy to calculate, we would also consider the following two choices of the stochastic step:

which can be seen as special cases of Eq. 10.

Under Section 2.1, the expectation of the stochastic steps Eq. 10 satisfy that for every k∈N,αk>0 and xk∈Rd, there is a Cxk,αkζk∈[−L,L], which depends on xk and αkζk for every ζk, such that

taking expectations with respect to the distribution of ζk and recalling Eq. 11, one obtains

We now formalize an assumption of distribution of random directions as follows. This will be an important basis for subsequent analysis. The d-dimensional random vectors {ζk} are independent and identically distributed and simultaneously, for every k∈N, ζk∈Rd satisfy (i) the mean of each component is 0, i.e.,

(ii) the covariance matrix is a unit matrix, i.e.,

and (iii) every component is bounded or has a finite nonzero fourth moment, i.e., for all

One of the typical choices for the distribution of ζk is, of course, the d

-dimensional standard normal distribution with zero mean and unit covariance matrix, whose each component is obviously unbounded but has a finite fourth moment, say,

[−√3,√3]d, whose each component is bounded and has a finite fourth moment.

Under Section 2.3 alone, we could obtain the following lemma. Such a result is essential for convergence analyses of all our methods. And in fact, although not so intuitive, this lemma is a direct source of the basic idea for this work.

Under Section 2.3, for every vector ω∈Rd independent of ζk, it follows that

where {ζk} are independent and identically distributed,

from Section 2.3 we further observed that for all 1⩽j⩽d,

Secondly, from Section 2.3, if every component of ζk is bounded, i.e., |ζ(i)k|⩽rζ, then one obtains

or, if every component of ζk has a finite nonzero fourth moment m(4)ζ, then according to Cauchy-Schwartz’s inequality, it follows that

and further, one also obtains

The important role of Section 2.3 is to ensure that 1αkEξk,ζk[s(xk,ξk,αk,ζk)] an asymptotic unbiased estimator of −∇F(xk). And it also allows us to analyze the bound of the quadratic form Eq. 7 in the expectation of stochastic directions.

Under Sections 2.3 and 2.1, the stochastic steps of SGFD (Algorithm 1) satisfy the asymptotic unbiasedness

and for every k∈N, it follows that

where the constant Dζ comes from Lemma 3. □

According to Lemma 2, there are Cxk,αkζk∈[−L,L] such that

First, it follows from Lemma 3 that

and further obtains Eq. 22 by noting that

together with the Arithmetic Mean Geometric Mean inequality, i.e.,

Similarly, by Eq. 22 and the Arithmetic Mean Geometric Mean inequality, it holds that

Finally, by Lemma 1 and Section 2.5, the iterates generated by SGFD satisfy

According to Lemma 4 and 0<αk⩽1LMG, we have

Subtracting F∗ from both sides and applying Eq. 9, this yields

and it follows from taking total expectations that

Thus, the desired result follows by repeatedly applying this inequality above through iteration from 1 to k. ■

Therefore, under strong convex conditions, the convergence of the SGFD methods is closely related to the limits

Before we return to this issue in Section 4, we shall consider the SGFD methods with momentum in the next section.

In the community working on training DNNs, stochastic gradient methods with momentum are very popular because of their practical performance [7, 16]. Now we will add a momentum term to our gradient-free methods. Especially, we provide a theoretical analysis about the inclusion of momentum in stochastic settings. And it is shown that the momentum term introduces extra bias but reduces variance for the stochastic directions.

Gradient-free methods with momentum are procedures in which each step is chosen as a weighted average of all historical stochastic directions. And specifically, with an initial point x1, these methods are characterized by the iteration

Thus, these methods can be rewritten by the iteration

where the momentum direction