With a weighting scheme proportional to t, a traditional stochastic gradient descent (SGD) algorithm achieves a high probability convergence rate of O(κ/T) for strongly convex functions, instead of O(κ ln(T)/T). We also prove that an accelerated SGD algorithm also achieves a rate of O(κ/T). 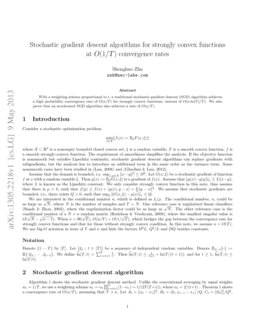 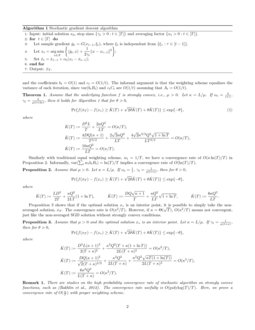 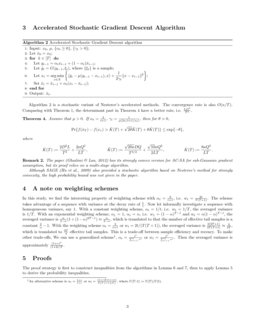 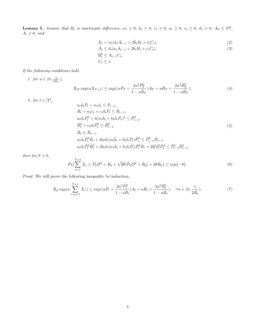 In this work we consider the stochastic minimization of nonsmooth convex...
Hua Ouyang, et al. ∙

We consider the minimization of a function defined on a Riemannian manif...
Nilesh Tripuraneni, et al. ∙

where \calX⊂\bbRd is a nonempty bounded closed convex set, ξ

is a random variable,

is a smooth strongly-convex function. The requirement of smoothness simplifies the analysis. If the objective function is nonsmooth but satisfies Lipschitz continuity, stochastic gradient descent algorithms can replace gradients with subgradients, but the analysis has to introduce an additional term in the same order as the variance term. Some nonsmooth cases have been studied in

Assume that the domain is bounded, i.e. supx,y∈\calX∥x−y∥2≤D2. Let G(x,ξ) be a stochastic gradient of function f at x with a random variable ξ. Then g(x):=\expect[ξ]G(x,ξ) is a gradient of f(x). Assume that ∥g(x)−g(y)∥∗≤L∥x−y∥, where L is known as the Lipschitz constant. We only consider strongly convex function in this note, thus assume that there is μ>0, such that f(y)≥f(x)+⟨g(x),y−x⟩+μ2∥y−x∥2. We assume that stochastic gradients are bounded, i.e., there exists Q>0, such that supξ∥G(x,ξ)−g(x)∥∗≤Q.

[smale03:_estim_approx_error_learn_theor], where the regularization factor could be as large as √N. The other reference case is the conditional number of a N×nrandom matrix [rudelson09:_small]

, where the smallest singular value is

O(√N−√n−1). When κ=Θ(√T), O(κ/T)=O(1/√T), which bridges the gap between the convergence rate for strongly convex functions and that for those without strongly convex condition. In this note, we assume κ=O(T). We use big-O notation in term of T and κ and hide the factors D2L, Q2/L and DQ besides constants.

Algorithm 2 is a stochastic variant of Nesterov’s accelerated methods. The convergence rate is also O(κ/T). Comparing with Theorem 1, the determinant part in Theorem 3 have a better rate, i.e. LD2T2. Assume that μ>0. If αt=2t+1, γt=1μ(2κ/t+1/αt), then for θ>0,

The paper [ghadimi12:_optim_stoch_approx_algor_stron] has its strongly convex version for AC-SA for sub-Gaussian gradient assumption, but its proof relies on a multi-stage algorithm.

Although SAGE [hu09:_accel_gradien_method_stoch_optim_onlin_learn] also provided a stochastic algorithm based on Nesterov’s method for strongly convexity, the high probability bound was not given in the paper.

4 A note on weighting schemes

The proof strategy is first to construct inequalities from the algorithms in Lemma 5 and 5, then to apply Lemma 5 to derive the probability inequalities. Assume that Bt is martingale difference, wt≥0, ~at≥0, ~ct≥0, at≥0, ct≥0, dt>0, A0≤D2, At≥0, and

If the following conditions hold

We will prove the following inequality by induction,