We consider computing eigenspaces of an elliptic self-adjoint operator depending on a countable number of parameters in an affine fashion. The eigenspaces of interest are assumed to be isolated in the sense that the corresponding eigenvalues are separated from the rest of the spectrum for all values of the parameters. We show that such eigenspaces can in fact be extended to complex-analytic functions of the parameters and quantify this analytic dependence in way that leads to convergence of sparse polynomial approximations. A stochastic collocation method on an anisoptropic sparse grid in the parameter domain is proposed for computing a basis for the eigenspace of interest. 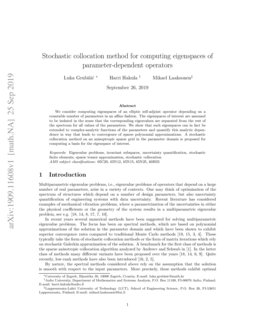 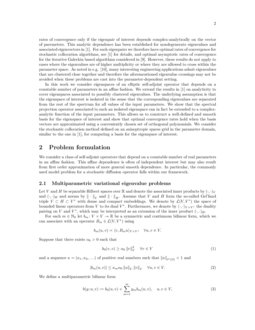 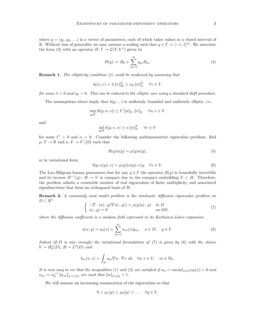 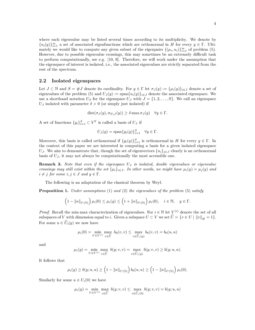 A sorting algorithm for complex eigenvalues

In this paper, we study the desingularization problem in the first q-Wey...
Christoph Koutschan, et al. ∙

Inverses of Matern Covariances on Grids

In this paper we propose and analyze inexact and stochastic versions of ...
Antonio Silveti-Falls, et al. ∙

Multiparametric eigenvalue problems, i.e., eigenvalue problems of operators that depend on a large number of real parameters, arise in a variety of contexts. One may think of optimization of the spectrum of structures which depend on a number of design parameters, but also uncertainty quantification of engineering systems with data uncertainty. Recent literature has considered examples of mechanical vibration problems, where a parametrization of the uncertainties in either the physical coefficients or the geometry of the system results in a multiparametric eigenvalue problem, see e.g. [18, 14, 8, 17, 7, 10].

In recent years several numerical methods have been suggested for solving multiparametric eigenvalue problems. The focus has been on spectral methods, which are based on polynomial approximations of the solution in the parameter domain and which have been shown to exhibit superior convergence rates compared to traditional Monte Carlo methods [19, 15, 3, 4]. These typically take the form of stochastic collocation methods or the form of matrix iterations which rely on stochastic Galerkin approximation of the solution. A benchmark for the first class of methods is the sparse anisotropic collocation algorithm analyzed by Andreev and Schwab in [1]. In the latter class of methods many different variants have been proposed over the years [18, 14, 6, 9]. Quite recently, low-rank methods have also been intruduced [16, 2, 5].

By nature, the spectral methods considered above rely on the assumption that the solution is smooth with respect to the input parameters. More precisely, these methods exhibit optimal rates of convergence only if the eigenpair of interest depends complex-analytically on the vector of paremeters. This analytic dependence has been established for nondegenerate eigenvalues and associated eigenvectors in

[1]. For such eigenpairs we therefore have optimal rates of convergence for stochastic collocation algorithms, see [1] for details, and optimal asymptotic rates of convergence for the iterative Galerkin based algorithms considered in [9]. However, these results do not apply to cases where the eigenvalues are of higher multiplicity or where they are allowed to cross within the parameter space. As noted in e.g. [10], many interesting engineering applications admit eigenvalues that are clustered close together and therefore the aforementioned eigenvalue crossings may not be avoided when these problems are cast into the parameter-dependent setting.

In this work we consider eigenspaces of an elliptic self-adjoint operator that depends on a countable number of parameters in an affine fashion. We extend the results in [1] on analyticity to cover eigenspaces associated to possibly clustered eigenvalues. The underlying assumption is that the eigenspace of interest is isolated in the sense that the corresponding eigenvalues are separated from the rest of the spectrum for all values of the input parameters. We show that the spectral projection operator associated to such an isolated eigenspace can in fact be extended to a complex-analytic function of the input parameters. This allows us to construct a well-defined and smooth basis for the eigenspace of interest and show that optimal convergence rates hold when the basis vectors are approximated using a conveniently chosen set of orthogonal polynomials. We consider the stochastic collocation method defined on an anisoptropic sparse grid in the parameter domain, similar to the one in [1], for computing a basis for the eigenspace of interest.

We consider a class of self-adjoint operators that depend on a countable number of real parameters in an affine fashion. This affine dependence is often of independent interest but may also result from first order approximation of more general smooth dependence. In particular, the commonly used model problem for a stochastic diffusion operator falls within our framework.

Let V and H be separable Hilbert spaces over R and denote the associated inner products by (⋅,⋅)V and (⋅,⋅)H and norms by ∥∥ ⋅ ∥∥V and ∥∥ ⋅ ∥∥H. Assume that V and H form the so-called Gel’fand triple V⊂H⊂V∗ with dense and compact embeddings. We denote by L(V,V∗) the space of bounded linear operators from V to its dual V∗. Furthermore, we denote by ⟨⋅,⋅⟩V×V∗ the duality pairing on V and V∗, which may be interpreted as an extension of the inner product (⋅,⋅)H.

For each m∈N0 let bm:V×V→R be a symmetric and continuous bilinear form, which we can associate with an operator Bm∈L(V,V∗) using

Suppose that there exists α0>0 such that

We define a multiparametric bilinear form

where y=(y1,y2,…) is a vector of parameters, each of which takes values in a closed interval of R. Without loss of generality we may assume a scaling such that y∈Γ:=[−1,1]∞. We associate the form (3) with an operator B:Γ→L(V,V∗) given by

The ellipticity condition (1) could be weakened by assuming that

for some λ>0 and α0>0. This can be reduced to the elliptic case using a standard shift procedure.

The assumptions above imply that b(y;⋅,⋅) is uniformly bounded and uniformly elliptic, i.e.,

for some C>0 and α>0. Consider the following multiparametric eigenvalue problem: find μ:Γ→R and u:Γ→V∖{0} such that

or in variational form

The Lax-Milgram lemma guarantees that for any y∈Γ the operator B(y) is boundedly invertible and its inverse B−1(y):H→V is compact due to the compact embedding V⊂H

. Therefore, the problem admits a countable number of real eigenvalues of finite multiplicity and associated eigenfunctions that form an orthogonal basis of

We will assume an increasing enumeration of the eigenvalues so that

where each eigenvalue may be listed several times according to its multiplicity. We denote by {ui(y)}∞i=1 a set of associated eigenfunctions which are orthonormal in H for every y∈Γ. Ultimately we would like to compute any given subset of the eigenpairs {(μi,ui)}∞i=1 of problem (5). However, due to possible eigenvalue crossings, this may sometimes be an extremely difficult task to perform computationally, see e.g. [10, 9]. Therefore, we will work under the assumption that the eigenspace of interest is isolated, i.e., the associated eigenvalues are strictly separated from the rest of the spectrum.

Let J⊂N and S=#J denote its cardinality. For y∈Γ let σJ(y):={μi(y)}i∈J denote a set of eigenvalues of the problem (5) and UJ(y):=span{ui(y)}i∈J denote the associated eigenspace. We use a shorthand notation US for the eigenspace UJ with J={1,2,…,S}. We call an eigenspace UJ isolated with parameter δ>0 (or simply just isolated) if

Moreover, this basis is called orthonormal if {gi(y)}Si=1 is orthonormal in H for every y∈Γ. In the context of this paper we are interested in computing a basis for a given isolated eigenspace UJ. We aim to demonstrate that, though the set of eigenvectors {ui}j∈J clearly is an orthonormal basis of UJ, it may not always be computationally the most accessible one.

Note that even if the eigenspace UJ is isolated, double eigenvalues or eigenvalue crossings may still exist within the set {μi}i∈J. In other words, we might have μi(y)=μj(y) and i≠j for some i,j∈J and y∈Γ.

The following is an adaptation of the classical theorem by Weyl.

Recall the min-max characterization of eigenvalues. For i∈N let V(i) denote the set of all subspaces of V with dimension equal to i. Given a subspace U⊂V we set ˆU={v∈U | ∥v∥H=1}. For some u∈ˆUi(y) we now have

Similarly for some u∈Ui(0) we have

As a corollary we obtain sufficient criteria for an eigenspace to be isolated. For simplicity we state these only in the case of an eigenspace US with S∈N.

Clearly δ>0. By Proposition 1 we have

Given a set J⊂N with cardinality S, we define a canonical basis {^ui}Si=1 for the eigenspace UJ by setting

Here J(i) denotes the ith element in any fixed permutation of J. Observe that the canonical basis vectors {^ui}Si=1 now only depend on the eigenspace UJ and not on the choice of the individual eigenvectors {ui}i∈J. Moreover, if the matrix {(uJ(i)(0),uJ(j)(y))H}Si,j=1 is nonsingular, then {^ui}Si=1 is in fact a basis for UJ. Note that ^ui(y) need not be orthonormal for y≠0

{(uJ(i)(0),uJ(j)(y))H}Si,j=1 denotes the condition number of the basis and is uniformly bounded away from infinite due to the spectral separation assumption as given by the standard results for the convergence radii for the perturbation expansions of spectral projections from [13].

Next we will prove that any isolated eigenspace is in fact analytic with respect to the parameter vector y∈Γ in a suitable sense. To this end we extend our analysis for complex valued arguments: In this section we assume that V and H are separable Hilbert spaces over C and extend the inner products (⋅,⋅)V and (⋅,⋅)H as well as the duality pairing ⟨⋅,⋅⟩V×V∗ for complex-valued arguments sesquilinearly. Now (4) can be treated as the restriction to Γ of the operator-valued function

We equip Γ⊂C∞ with the Hausdorff topology so that this fits the framework of [11].

For z∈C∞ let Ω(z) be a closed curve in the complex plane, which encloses a set of eigenvalues of B(z), denoted by σJ(z), but no other elements in the spectrum of B(z). We define the spectral projection

The canonical basis from section 2.3 can now be expressed as

3.2 Analyticity in one parameter

We start with eigenspaces of an operator depending on a single parameter t∈[−1,1]. In other words we consider the eigenvalues of (5) when

Here (9) should be understood as the restriction to [−1,1] of the operator-valued function

Assume first that J is a set of consecutive natural numbers. Let t∈[−1,1] and denote γ(t):=dist(σJ(t),σN∖J(t))>0. Let Ω(t) be the positively oriented circle of radius

An arbitrary J⊂N may always be partitioned in such a way that each partition is a set of consecutive natural numbers. The previous proof applies for all partitions separately and thus the spectrum of B(z) is separated for all z∈E(r) and the total projection z→PJ(z) is complex-analytic in E(r). ∎

3.3 Analyticity in a countable number of parameters

We start with a simple Lemma that can be deduced from standard perturbation theory for analytic operators, see Chapter VII in [13].

Suppose now that κ∈ℓp(N) for some p∈(0,1]. Then we have the following result.

Consider the problem (5) with assumptions (1) and (2). Assume that κ∈ℓp(N) for some p∈(0,1]. Given a finite J⊂N assume that the eigenspace y→UJ(y) is isolated with parameter δ>0 for y∈Γ. Then it admits a complex-analytic extension z→UJ(z) in the region

As in [1] we introduce an anisotropic sparse grid collocation operator defined with respect to a finite multi-index set. Let (N∞0)c denote the set of all multi-indices with finite support, i.e.,

Let Lp be the univariate Legendre polynomial of degree p. Denote by {χ(p)k}pk=0 the zeros of Lp+1

where {ℓ(p)k}pk=0 are the related Lagrange basis polynomials of degree p. Given a finite set A⊂(N∞0)c we may now define the sparse collocation operator as

Observe that for every χ∈XA we have χm=0 when m>MA. For monotone multi-index sets we have

and the number of collocation points admits the bound

The following convergence estimate is similar to the ones in

Let H be a Hilbert space. Assume that v:Γ→H admits a complex-analytic extension in the region

Suppose now that the eigenspace y→UJ(y) of the problem (5) is isolated for some finite J⊂N. In addition to (1) and (2) assume that κ∈ℓp(N) for some p∈(0,1]. Then by Theorem 1 and Proposition 3 we have the optimal convergence rate

when the stochastic collocation algorithm is used to approximate the canonical basis vectors {^ui}i∈J of UJ.