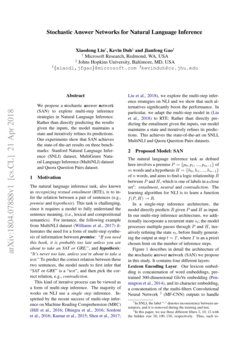 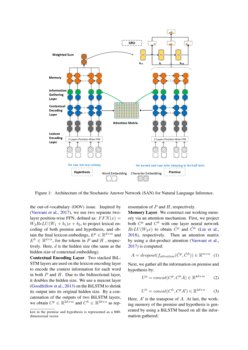 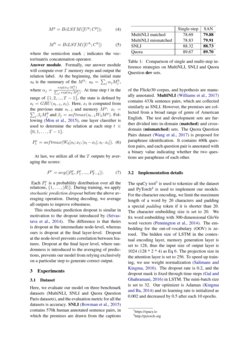 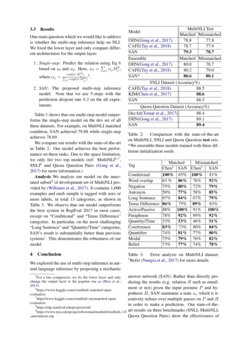 The natural language inference task, also known as recognizing textual entailment (RTE), is to infer the relation between a pair of sentences (e.g., premise and hypothesis). This task is challenging, since it requires a model to fully understand the sentence meaning, (i.e., lexical and compositional semantics). For instance, the following example from MultiNLI dataset Williams et al. (2017) illustrates the need for a form of multi-step synthesis of information between premise

: “If you need this book, it is probably too late unless you are about to take an SAT or GRE.”

, and hypothesis: “It’s never too late, unless you’re about to take a test.” To predict the correct relation between these two sentences, the model needs to first infer that “SAT or GRE” is a “test”, and then pick the correct relation, e.g., contradiction.

The natural language inference task as defined here involves a premise P={p0,p1,...,pm−1} of m words and a hypothesis H={h0,h1,...,hn−1} of n words, and aims to find a logic relationship R between P and H, which is one of labels in a close set: entailment, neutral and contradiction. The goal is to learn a model f(P,H)→R.

In a single-step inference architecture, the model directly predicts R given P and H as input. In our multi-step inference architecture, we additionally incorporate a recurrent state st; the model processes multiple passes through P and H, iteratively refining the state st, before finally generating the output at step t=T, where T is an a priori chosen limit on the number of inference steps.

Figure 1 describes in detail the architecture of the stochastic answer network (SAN) used in this study; this model is adapted from the MRC multi-step inference literature Liu et al. (2018)

Contextual Encoding Layer. Two stacked BiLSTM layers are used on the lexicon encoding layer to encode the context information for each word in both P and H. Due to the bidirectional layer, it doubles the hidden size. We use a maxout layer Goodfellow et al. (2013) on the BiLSTM to shrink its output into its original hidden size. By a concatenation of the outputs of two BiLSTM layers, we obtain Cp∈R2d×m and Ch∈R2d×n as representation of P and H, respectively.

where A is an attention matrix, and dropout is applied for smoothing. Note that ^Cp and ^Ch is transformed from Cp and Ch

by one layer neural network

ReLU(W3x), respectively. Next, we gather all the information on premise and hypothesis by: Up=[Cp;ChA]∈R4d×m and Uh=[Ch;CpA′]∈R4d×n. The semicolon ;

A′ is the transpose of A. Last, the working memory of the premise and hypothesis is generated by using a BiLSTM based on all the information gathered: Mp=BiLSTM([Up;Cp]) and Mh=BiLSTM([Uh;Ch]).

Answer module. Formally, our answer module will compute over T memory steps and output the relation label. At the beginning, the initial state s0 is the summary of the Mh: s0=∑jαjMhj, where αj=exp(θ2⋅Mhj)∑j′exp(θ2⋅Mhj′). At time step t in the range of {1,2,...,T−1}, the state is defined by st=GRU(st−1,xt). Here, xt is computed from the previous state st−1 and memory Mp: xt=∑jβjMpj and βj=softmax(st−1θ3Mp). Following Mou et al. (2015)

, one layer classifier is used to determine the relation at each step

At last, we utilize all of the T outputs by averaging the scores:

is a probability distribution over all the relations,

{1,…,|R|}. During training, we apply stochastic prediction dropout before the above averaging operation. During decoding, we average all outputs to improve robustness.

Here, we evaluate our model in terms of accuracy on four benchmark datasets. SNLI Bowman et al. (2015) contains 570k human annotated sentence pairs, in which the premises are drawn from the captions of the Flickr30 corpus, and hypothesis are manually annotated. MultiNLI Williams et al. (2017) contains 433k sentence pairs, which are collected similarly as SNLI. However, the premises are collected from a broad range of genre of American English. The test and development sets are further divided into in-domain (matched) and cross-domain (mismatched) sets. The Quora Question Pairs dataset Wang et al. (2017) is proposed for paraphrase identification. It contains 400k question pairs, and each question pair is annotated with a binary value indicating whether the two questions are paraphrase of each other. SciTail dataset is created from a science question answering (SciQ) dataset. It contains 1,834 questions with 10,101 entailments examples and 16,925 neutral examples. Note that it only contains two types of labels, so is a binary task.

is used to tokenize all the dataset and PyTorch is used to implement our models. We fix word embedding with 300-dimensional GloVe word vectors

Pennington et al. (2014). For the character encoding, we use a concatenation of the multi-filter Convolutional Neural Nets with windows 1,3,5 and the hidden size 50,100,150.333We limit the maximum length of a word by 20 characters. The character embedding size is set to 20. So lexicon embeddings are d=600-dimensions. The embedding for the out-of-vocabulary is zeroed. The hidden size of LSTM in the contextual encoding layer, memory generation layer is set to 128, thus the input size of output layer is 1024 (128 * 2 * 4) as Eq 2. The projection size in the attention layer is set to 256. To speed up training, we use weight normalization Salimans and Kingma (2016). The dropout rate is 0.2, and the dropout mask is fixed through time steps Gal and Ghahramani (2016) in LSTM. The mini-batch size is set to 32. Our optimizer is Adamax Kingma and Ba (2014)

and its learning rate is initialized as 0.002 and decreased by 0.5 after each 10 epochs.

One main question which we would like to address is whether the multi-step inference help on NLI. We fixed the lower layer and only compare different architectures for the output layer:

We compare our results with the state-of-the-art in Table 2. Our model achieves the best performance on SciTai and Quora Question tasks. For instance, SAN obtains 89.4 (vs 89.1) and 88.4 (88.3) on the Quora Question and SciTail test set, respectively and set the new state-of-the-art. On SNLI and MultiNLI dataset, ESIM+ELMo Peters et al. (2018), GPT Radford et al. (2018) and BERT Devlin et al. (2018) use a large amount of external knowledge or a large scale pretrained contextual embeddings. However, SAN is still competitive these models. On SciTail dataset, SAN even outperforms GPT. Due to the space limitation, we only list two top models.555See leaderboard for more information: https://www.kaggle.com/c/multinli-matched-open-evaluation, https//www.kaggle.com/c/multinli-mismatched-open-evaluation, https://nlp.stanford.edu/projects/snli, http://data.allenai.org/scitail/leaderboard/.

We further utilize BERT as a feature extractor666We run BERT (the base model) to extract embeddings of both premise and hypothesis and then feed it to answer models for a fair comparison. and use the SAN answer module on top of it. Comparing with Single-step baseline, the proposed model obtains +2.8 improvement on the SciTail test set (94.0 vs 91.2) and +2.1 improvement on the SciTail dev set (96.1 vs 93.9). This shows the generalization of the proposed model which can be easily adapted on other models 777Due to highly time consumption and space limitation, we omit the results using BERT on SNLI/MNLI/Quora Question dataset..

Analysis: How many steps it needs? We search the number of steps t from 1 to 10. We observe that when t increases, our model obtains a better improvement (e.g., 86.7 (t=2)); however when t=5 or t=6, it achieves best results (89.4) on SciTail dev set and then begins to downgrade the performance. Thus, we set t=5 in all our experiments.

Finally, we analyze our model on the annotated subset999https://www.nyu.edu/projects/bowman/multinli/multinli_1.0 _annotations.zip
of development set of MultiNLI. It contains 1,000 examples, each tagged by categories shown in Table 3. Our model outperforms the best system in RepEval 2017 Chen et al. (2017) in most cases, except on “Conditional” and “Tense Difference” categories. We also find that SAN works extremely well on “Active/Passive” and “Paraphrase” categories. Comparing with Chen’s model, the biggest improvement of SAN (50% vs 77% and 58% vs 85% on Matched and Mismatched settings respectively) is on the “Antonym” category. In particular, on the most challenging “Long Sentence” and “Quantity/Time” categories, SAN’s result is substantially better than previous systems. This demonstrates the robustness of multi-step inference.

We explored the use of multi-step inference in natural language inference by proposing a stochastic answer network (SAN). Rather than directly predicting the results (e.g. relation R such as entailment or not) given the input premise P and hypothesis H, SAN maintains a state st, which it iteratively refines over multiple passes on P and H in order to make a prediction. Our state-of-the-art results on four benchmarks (SNLI, MultiNLI, SciTail, Quora Question Pairs) show the effectiveness of this multi-step inference architecture. In future, we would like to incorporate the pertrained contextual embedding, e.g., ELMo Peters et al. (2018) and GPT Radford et al. (2018) into our model and multi-task learning Liu et al. (2019).