Analytical understanding of how low-dimensional latent features reveal themselves in large-dimensional data is still lacking. We study this by defining a linear latent feature model with additive noise constructed from probabilistic matrices, and analytically and numerically computing the statistical distributions of pairwise correlations and eigenvalues of the correlation matrix. This allows us to resolve the latent feature structure across a wide range of data regimes set by the number of recorded variables, observations, latent features and the signal-to-noise ratio. We find a characteristic imprint of latent features in the distribution of correlations and eigenvalues and provide an analytic estimate for the boundary between signal and noise even in the absence of a clear spectral gap. 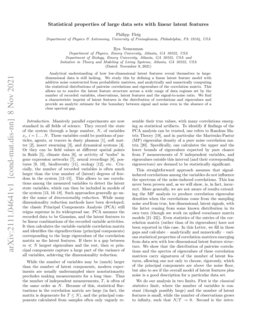 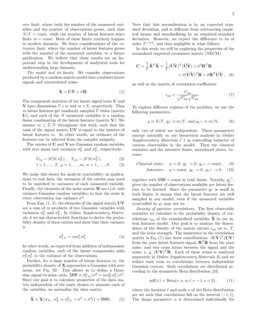 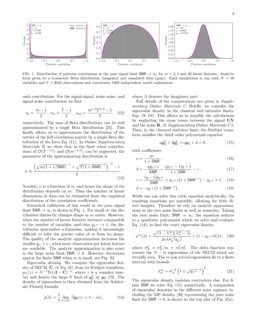 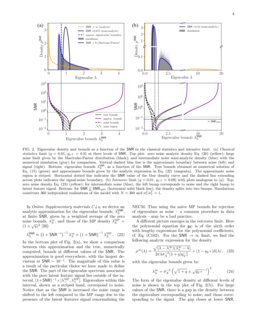 Weak detection of signal in the spiked Wigner model

We consider the problem of detecting the presence of the signal in a ran...
Hye Won Chung, et al. ∙

A Scalable Approach to Estimating the Rank of High-Dimensional Data

An Investigation of Why Overparameterization Exacerbates Spurious Correlations

Appendix A Data distribution for the latent feature model with no noise, its variance and large m limit

Each entry Xij of the latent features data matrix UV is given by the sum of m products of two i.i.d. Gaussian random variables u∼N(0,σ2U) and v∼N(0,σ2V):

The product, x=uv, is distributed according to the normal product distribution [1]:

where Kν is the modified Bessel function of the second kind:

To derive the probability density of the latent feature model entries Xij, we first compute the characteristic function φx

by taking the Fourier transform of the normal product distribution. We then use the fact that the characteristic function

φX of the sum of m products x is given by φX=(φx)m. The inverse Fourier transform of φX then yields the sought after probability density.

Specifically, the characteristic function φx of the normal product distribution is

Finally, performing the inverse transformation we obtain the probability density function of the sum

Since the probability density function of X is symmetric around zero, the mean of the distribution vanishes:

The integral above can be evaluated in terms of generalized hypergeometric functions [2]. We present the calculation for when m is even in detail:

and 1F2 is the generalized hypergeometric function

In the expression above, (⋅)k is the Pochhammer symbol, and csc(⋅) is the cosecant. Since m is even, we also have ν∉Z. Putting everything together, we obtain the following expression for the variance

where we have used the fact that the numerator after the first equality vanishes at Z=0. We can evaluate the limit Z→∞, on the right-hand side numerically as shown in Fig. S1 and find that the variance of the latent feature data values is

This is in agreement with the intuition that every latent dimension contributes its own variance to the variance of the data.

We note that, for large values of the number of latent features m, the distribution (30

) becomes normal, in agreement with the law of large numbers:

for compares exact analytical expression of the probability distribution and its Gaussian approximation to numerical simulations.

As a final note, if we were interested in the distribution of data with noise, we would need to convolve the density in Eq. (30) with the Gaussian density of the noise.

Appendix B Probability density of the correlation coefficients

For our latent features model with noise, here we calculate the probability distribution of entries in the empirical data correlation matrix. Before doing this, a few notes are in order. First, the correlations depend on the basis, in which variables are measured, becoming a diagonal matrix in the special case when the measured variables are the principal axes of the data cloud. Thus to make statements independent of the basis, we consider the distribution of typical correlations, or correlations in the basis random w. r. t. the principal axes of the data. For a given realization, the N-dimensional data cloud is typically anisotropic, with m<N long directions dominated by the latent feature signal and N−m short directions dominated by noise. When N≫m, principal axes of the data cloud do not align with the measured variables for the vast majority of random rotations, and correlations between any random pair of variables have contributions from all latent dimensions. Thus we expect the number of latent dimensions to be imprinted in the distribution of the elements of the correlation matrix, so that the statistics of the elements carries information about the underlying structure of the model.

b.1 Preliminaries: Density of the correlation coefficient of two random Gaussian variables

where the vectors’ components are mutually independent, i.i.d. random variables. The correlation coefficient is distributed according to [6]

This can be rewritten in terms of a Beta distribution

where x∈[0,1] and B(α,β) is the Beta function. Specifically, the density of correlations is given by the symmetric Beta distribution

where the location ℓ and scale s are set such that the density is defined on the interval of correlation values [-1,1], and

b.2 Density of correlations in the latent feature model

There are multiple contributions to the correlations among the measured variables. We compute them individually, and then combine the contributions. We find that each contribution is distributed according to a symmetric Beta distribution. To obtain the overall density, we approximate the sum of Beta distributions by a single Beta distribution, the parameter of which is obtained by matching the variance to the sum of the variances of the individual components. To perform these analyses, we only keep terms to the leading order in the SNR→0 or the SNR→∞ limit. Further, we assume that qU is small in accordance with the classical and intensive regimes limits.

We start with the pure noise contribution to the correlations

The expression on the right-hand side is the correlation coefficient between two random Gaussian variables. Using Eq. (43), we arrive at

and the variance of this density is

Next we compute the density of the pure signal contribution

and similarly for σq. Rearranging, we find

The expression in parentheses of both of the equations above is a (co)-variance of Gaussian random numbers. For μ=ν, it follows the scaled χ2-distribution with T degrees of freedom. For μ≠ν, it is given by a rescaled version of the distribution in Eq. (30), with T instead of m. Crucially, the variance of either is 1/T. Thus in the limit q→0, the terms in parentheses are σ2Uδμν+O(T−1/2), where the correction O(T−1/2) is probabilistic, but will be neglected in what follows. We get

We see that the sought after correlation is a correlation coefficient between Gaussian variables, but with m samples instead of T. Using again Eq. (43), we write

Finally, for the signal-noise cross terms in the correlation, we have

For the quantity in parentheses in Eq. (60), we define

where we have extracted the factor of m to highlight that the expression in parenthesis is the correlation between Gaussian random numbers. From this, using Eq. (43), we conclude that

The variance of this density is

An analogous expression holds for the RTUV contribution.

The empirical correlation matrix is given by

Using Eqs (46), (51) and (60), the correlation matrix can be written as a weighted sum of the three types of contributions

The means of the Beta distributions in Eq. (48), Eq. (57), and Eq. (B.2) are zero and thus the mean of the density of the combined contributions is also zero. Taking the sum of variances we obtain

In the limit when T and m are large enough such that contributions of O(T−1/2) and O(m−1/2) can be neglected, we have the following convergence of the empirical quantities

Consequently the variances of the contributions take the form

Thus, in this limit, the variance of the Beta distribution, Eq. (72), is of the form

Finally, from the relation in Eq. (45), we obtain the parameter α of the sought after Beta distribution.

To compute the eigenvalue density of the NECM C, we use methods of Random Matrix Theory [4]. The standard approach is to compute the finite size Stieljtes transform

where I denotes the imaginary part.

We start with writing again the definition of the normalized empirical covariance matrix (NECM), which differs from the correlation matrix only by O(T−1/2):

The NECM contains three different contributions: the (UV)T(UV) from the pure latent feature signal, RTR from pure noise, and two terms of the type (UV)TR, which are cross terms between the latent signal and the noise. Each contribution is an N×N random matrix. Critical to computing the eigenvalue density of random matrices is the concept of matrix freeness [5], which is the generalization of statistical independence to matrices. The eigenvalue spectrum of sums and products of free matrices can be computed from spectra of summands and factors using the R- and the S-transforms, which are related to the Stieltjes transform g and are additive and multiplicative, respectively. The signal-signal and the noise-noise contributions in the NECM definition are certainly free w. r. t. each other. We will argue in Appendix C.3 that, in our regimes of interest (the zero-noise limit (SNR→∞), the classical statistics limit from Eq. (9), and intensive limit from Eq. (10)), the cross-term contributions are negligible, so that we can drop them and approximate the NECM as

so that free matrix theory applies.

To calculate the spectrum of the signal-signal contribution to the NECM,

we note that, assuming m<T,N, this N×N matrix is of rank m. Thus we can work in the basis, where

There are m non-trivial eigenvalues associated with H, while the remaining N−m eigenvalues are zero. The finite size Stieltjes transform, gNC=N−1Tr(zI−C˜UV)−1, is then of the form

where λμ are the m eigenvalues of H˜UV and hmH˜UV(z) is its finite size Stieltjes transform.

Now we note that H˜UV in Eq. (88) is the product of two white Wishart matrices

is the Wishart matrix, and Y is a T×N matrix with i.i.d. standard normal entries. The key parameter characterizing such standard WY is the ratio of the number of columns to that of rows

Since U and VT are T×m and N×m matrices, respectively, a natural characterisation of H˜UV is then

with qqVT=qU, so that there are only two independent parameters.

It is now convenient to define

In the following, we only consider the limit of large matrices. Here T, N, m and σ2 go to infinity in such a way that q, qVT and SNR are all constant. Then in the thermodynamic limit the finite size Stieltjes transform in Eq. (C.1) becomes

where gC˜UV and h are the large matrices limits of the Stieltjes transforms of gNC˜UV and hmH˜UV, respectively.

c.2 The spectrum of C˜UV

We now compute the eigenvalue density of C˜UV. The first step is to compute the Stieljtes transform h. From Eq. (95), it is clear that this reduces to the problem of computing the eigenvalue spectrum of a product of two Wishart matrices.

The spectrum of a product of two free matrices can be computed with the help of the S-transform, which is defined for a random matrix A as

Crucially, for free matrices A and B, the S-transform is multiplicative

and, furthermore, for a scalar a,

Thus we only need to use the multiplicative property of the S-transform to compute the signal-signal contributions to the NECM. Specifically,

We now solve the equation for the functional inverse, T−1(T(z))=z, using the definition of the T-transform, Eq. (98), and dividing by a common factor of z. We obtain a cubic equation for the Stieltjes transform h:

Finally, we divide by qVT¯σ2X to obtain