We characterize the practical receiver in a wide range of signal intensity for optical wireless communication, from discrete pulse regime to continuous waveform regime. We first propose a statistical non-linear model based on the photomultiplier tube (PMT) multi-stage amplification and Poisson channel, and then derive the optimal and tractable suboptimal duty cycle with peak-power and average-power constraints for on-off key (OOK) modulation in linear regime. Subsequently, a threshold-based classifier is proposed to distinguish the PMT working regimes based on the non-linear model. Moreover, we derive the approximate performance of mean power detection with infinite sampling rate and finite over-sampling rate in the linear regime based on small dead time and central-limit theorem. We also fomulate a signal model in the non-linar regime. Furthermore, the performance of mean power detection and photon counting detection with maximum likelihood (ML) detection for different sampling rates is evaluated from both theoretical and numerical perspectives. We can conclude that the sample interval equivalent to dead time is a good choice, and lower sampling rate would significantly degrade the performance. 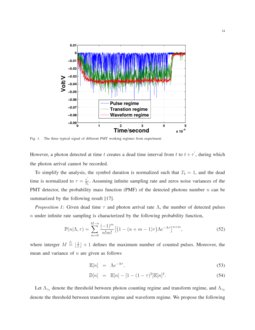 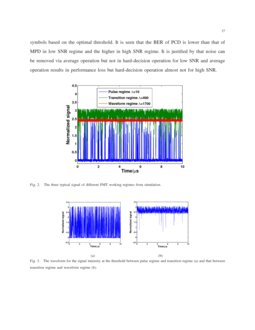 Optical wireless communication can work in both line-of-sight and non-line-of-sight scenarios. On some specific occasions where conventional RF is prohibited and direct-link transmission cannot be guaranteed, NLOS ultra-violet optical scattering communication provides an alternative solution to achieve certain information transmission rate, which shows a large path loss. Optical wireless communication may work in a wide range of signal intensity, from continuous waveform regime to discrete pulse regime. For the latter, it is difficult to detect the received signals using a conventional continuous waveform receiver, such as photon-diode (PD) and avalanche photondiode (APD). Instead, a photon-level photomultiplier tube (PMT) receiver needs to be employed, which converts the received photons to electronic pulse signals applying an multi-stage amplification.

. A variety of channel estimation approaches have been proposed for indoor visible light communication in

Most information theory and signal process works focus on perfect photo-counting receiver. A practice receiver typically consists of a PMT and the subsequent processing blocks [10]. A practical solution is to adopt PMT to detect the arrival photon and generate a series of pulses with certain width, which incurs certain dead time. The receiver parameters optimization including pulse holding time and threshold has been inverstigated in [11], which shows negligible thermal noise compared with shot noise in experiments. Practical PMT signal characterization based on three regimes related the non-linear effect has been investigated in [12]. [13]

shows that the non-linear takes place between the last dynode and anode due to space charge effect. A novel PMT shot noise model with asymmetric probability density has been inverstigated in

In this work, we are interested in the signal characterization, achievable transmission rate, and signal detection for a wide range of signal intensity, including discrete pulse regime, the continuous waveform regime, and the transition regime between them. More specifically, we propose a practical PMT model with a finite sampling rate ADC. We assume no electical thermal noise since it is negligible comparion with shot noise in PMT and propose a statistical non-linear model on the PMT receiver. Based on the asymmetric shot noise model, we investigate the achievable rate of single and multiple sampling rates in the PMT linear regime, along with the optimal duty cycle and tractable suboptimal duty cycle. We propose a threshold-based classifier related to non-linear function to distinguish the three work regimes, the discrete pulse regime, the continuous waveform regime, and the transition regime between them. Futhermore, we consider on-off keying (OOK) modulation and inverstigate the error probability of mean power detection (MPD) and photon counting detection (PCD) with different sampling rates. We derive approximate performance of mean power detection with “infinite” sampling rate and different over-sampling rate in linear regime based on short dead time compare with symbol duration and central-limit theorem. The theoretical results on the detection error probability are also evaluated by simulation results.

The remainder of this paper is organized as follows. In Section II, we present the PMT statistical non-linear model under consideration. In Section III, we derive the optimal duty cycle and tractable suboptimal duty cycle for single- and multiple-sampling rates. In Section IV, we propose a threshold-based classifier to distinguish the three work regimes. In Sections V and VI, we inverstigate the error probability of MPD with “infinite” and finite sampling rates. Numerical results are given in Section VII. Finally, Section VIII provides the concluding remarks.

Consider a practical receiver with finite sampling rate for optical wireless communication with photon-level signals, which contains a PMT detector, an ADC, and a diginal signal processing unit. When a photon arrives, the PMT detector generates a continuous pulse with certain width resulting from multi-stage ampification in the receiver dynode. The PMT output signal is sampled by the ADC.

Assume OOK modulation at the transmitter. The photons arrival times follows a Poisson process with arrival rate Λ proportional to the instantaneous incident power intensity at the receiver surface. Let G be the general expression on the gain of PMT. The normalized single photon response h(t) is related to PMT characteristics. Denote Tb as the symbol duration and the number of arrival photons N in a symbol is given as follows,

where Λ is the arrival rate of Poisson process. Letting τj denote the jth arrival time of photons, the corresponding single photon response is given by

where gains Gj for different js are independently and identically distributed (i.i.d) and satisfying Fokker-Planck equation [14]

. Its moment generate function (MGF) is given by,

Considering the PMT saturation effect caused by space charge effects in the last dynode stage of the electron multiplier, we model it using a non-linear function C(⋅). Assume that each photon response is linearly superposed in the PMT linear regime and saturated out of it. Denoting Xj(t) as the photon impulse response in interval (−jTb,(−j+1)Tb], we have

where Nj denotes the total arrival photons number in (−jTb,(−j+1)Tb] with photon arrival time τjk for 1≤k≤Nj. Hence, the total photocurrent at time t∈[0,Tb] resulting from all photons can be compactly written as follows,

For simplicity, assume that C(x)=x and h(t)=u(t)−u(t−τ), where u(t) is the step function. Define ~Zk as the normalized sample value Zk by average photon amplification A, where Zk denotes the ADC sample value. According to [14], we have the following moment generate function of ~Z,

where λ=Λτ and a=AB. Furthermore, the probability density of ~Z is given by

where I1(⋅) is the modified Bessel function of the first kind.

Based on Section II, x(t)=C(∑Nm=1Gmh(t−τm)) is determined by photon arrival (N,TN) and the PMT characterization. The output samples z are i.i.d. if the sample interval Ts>τ. Note that x(⋅) is equivalent to (N,TN) for C(x)=x and constant gain Gij, which implies I(b;(N,TN))=I(b;x(t)). Considering the nonlinearity effect, shot noise of amplification gain Gij and thermal noise, we have the general expression I(b;(N,TN))≥I(b;x(t))≥I(b;z).

We first provide the following peak-power and average-power constraints,

According to above model, we have the conditional probability function of f~z|b=i as follows:

where λ0=Λ0τ and λ1=(Λ0+ΛA)τ. For sufficiently small Λ0, we have the following approximation up to the first order of λ0,

) we can obtain the probability density function for

To further characterize the mutual information, we have the uniform continuity of fC~Z|λ(~z) is formalized as follows:

We have that the mutual information can be expressed as the sum of the continuous part and the discrete part, given by

where the mutual information for the discrete part is given as follows,

and a1=e−λ1(1−e−a); and the mutual information for the continuous part is given as follows,

The following Lemma illuminates the relationship of fC~Z|λ0 and fC~Z|λ1.

Plugging Equation (III-A) into Equation (13), we have

and thus the mutual information with both continuous part and discrete part is given as follows,

Due to small λ0 in practical scenario, we omit the terms that attenuates with λ0, which lead to the following approximation on the optimal duty cycle μ∗1,

For 0<a1<1, the optimal duty cycle μ∗=min{η,μ1}, where μ1 is the unique solution to the following equation