The class of α-stable distributions with a wide range of applications in economics, telecommunications, biology, applied, and theoretical physics. This is due to the fact that it possesses both the skewness and heavy tails. Since α-stable distribution suffers from a closed-form expression for density function, finding efficient estimators for its parameters has attracted a great deal of attention in the literature. Here, we propose some EM algorithm to estimate the maximum likelihood estimators of the parameters of α-stable distribution. The performance of the proposed EM algorithm is demonstrated via comparison study in the presence of other well-known competitors and analyzing three sets of real data. 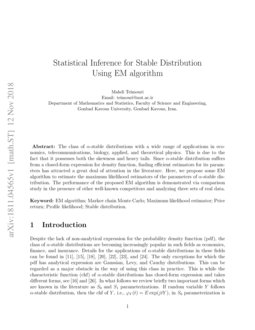 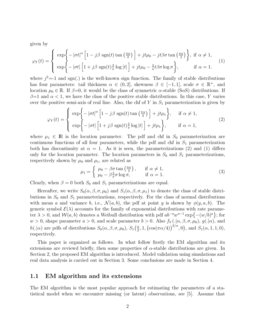 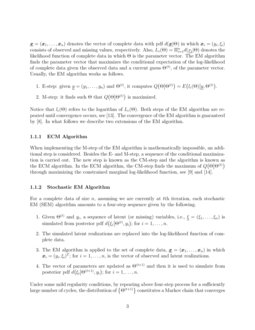 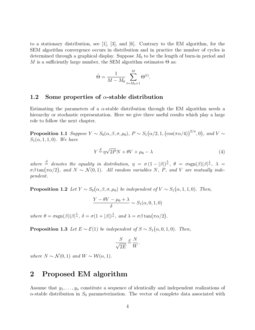 Despite the lack of non-analytical expression for the probability density function (pdf), the class of

. The only exceptions for which the pdf has analytical expression are Gaussian, Levy, and Cauchy distributions. This can be regarded as a major obstacle in the way of using this class in practice. This is while the characteristic function (chf) of

α-stable distributions has closed-form expression and takes different forms, see [16] and [26]. In what follows we review briefly two important forms which are known in the literature as S0 and S1

Y follows α-stable distribution, then the chf of Y, i.e., φY(t)=Eexp(jtY), in S0 parameterization is given by

Clearly, when β=0 both S0 and S1 parameterizations are equal.

parameterizations, respectively. For the class of normal distributions with mean

accounts for the family of exponential distributions with rate parameter

This paper is organized as follows. In what follow firstly the EM algorithm and its extensions are reviewd briefly, then some properties of α-stable distributions are given. In Section 2, the proposed EM algorithm is introduced. Model validation using simulations and real data analysis is carried out in Section 3. Some conclusions are made in Section 4.

1.1 EM algorithm and its extensions

The EM algorithm is the most popular approach for estimating the parameters of a statistical model when we encounter missing (or latent) observations, see [5]. Assume that x––=(x1,…,xn)

denotes the vector of complete data with pdf

For a complete data of size n, assuming we are currently at tth iteration, each stochastic EM (SEM) algorithm amounts to a four-step sequence given by the following.

Under some mild regularity conditions, by repeating above four-step process for a sufficiently large number of cycles, the distribution of {Θ(t+1)} constitutes a Markov chain that converges to a stationary distribution, see [1], [3], and [6]. Contrary to the EM algorithm, for the SEM algorithm convergence occurs in distribution and in practice the number of cycles is determined through a graphical display. Suppose M0 to be the length of burn-in period and M is a sufficiently large number, the SEM algorithm estimates Θ as:

1.2 Some properties of α-stable distribution

Estimating the parameters of a α-stable distribution through the EM algorithm needs a hierarchy or stochastic representation. Here we give three useful results which play a large role to follow the next chapter.

Assume that y1,…,yn constitute a sequence of identically and independent realizations of α-stable distribution in S0 parameterization. The vector of complete data associated with (4) is shown by in which p–, v– are vectors of realizations of latent variables P–– and V––, respectively. It turns out that representation (4) admits the following hierarchy.

where η, θ, and λ are defined after Proposition 1.1. Using hierarchy (2), the log-likelihood function of complete data is

To complete the E-step, we need to compute the quantities E(t)ri=E(P−1iVri∣∣yi,Θ(t)); for r=0,1,2. Now, it is straightforward to show that

Here, firstly, we perform a simulation study to compare the performance of the proposed EM algorithm with the ML approach for estimating the parameters of the class S0(α,β,σ,μ0). To do this, data are generated by the method of simulating α-stable random variable (see [4]) and then the maximum likelihood (ML) estimations are evaluated using STABLE software, see [17]. Secondly, we apply the proposed EM and ML approaches to the five sets of real data.

We apply the proposed EM and ML approaches to the 200 sets of samples of size 300. For the sake of simplicity, we restrict ourselves to the case of μ0=0. In each iteration, settings for the skewness and tail thickness parameters are: β=0,0.5,0.9 and α=0.5,0.9,1.2,1.5. The results of simulations are shown in Figure 1 and Figure 2 for σ=0.5 and σ=5, respectively. During simulations, we set M0=20, M=40, N0=100, and N=140. This means that the proposed EM algorithm is run for 140 iterations of which the first 100 iterations are removed as burn-in period. Also, in each iteration, the CM-step is repeated for 40 times of which the average of the last 20 runs is considered as the updated tail thickness parameter.

Form Figure 1 and Figure 2, in the sense of square root of the mean-squared error (RMSE) criterion, the following observations can be made.

It should be noted that the proposed EM algorithm shows better performance than the sample quantile (SQ, see

[12]) and empirical characteristic function (CF, see [7]) approaches, and so were eliminated by competitions. Also, as it is known, the EM algorithm cannot outperform the ML method. Sometimes, as noted above, the EM algorithm shows better performance than the ML method. This is because, STABLE computes the evaluated ML estimators not the exact ML ones.

The α-stable distribution is the most common used candidate for modelling the prices of speculative assets such as stock returns, see [2], [10], [19], and [23]. Here, we consider three sets of real data for illustrating an application of the α-stable distribution. The data are daily price returns of the major European stock indices including Switzerland SMI, France CAC, and UK FTSE. Following common practice for daily closing prices, we consider the transformed prices for n business days as (pt−1−pt)/pt−1; for t=2,…,n. We then fitted the distribution to the transformed data by the four methods including ML, EM, SQ, and CF. We obtained three sets of data from datasets package developed for R (R Core Team [21]) environment which include n=1860 observations. The results after applying above four approaches are given in Table 1. It should be noted that, for implementing the EM algorithm, the started α, β, σ, and μ0 are well away from the estimated values.

It is clear from Table 1 that the proposed EM algorithm outperforms the M, SQ, and CF approaches with respect to either the log-likelihood value or the KS statistic. The time series plots of iterations and fitted pdf to the histogram for returns of CAC shares are depicted in Figures 3. We emphasize that both of log-likelihood and KS statistics reporets in Table 1 are evaluated using STABLE. Also the fitted PDF to the histograms in Figure 3 are drawn using STABLE when the PDF parameters are estimated through the EM algorithm.

The result follows. Appendix 3: Proof of Proposition 1.3 As the main part of the CM-step, implementing the SEM algorithm requires to simulate from posterior distribution of Wi given y∗∗i and α(t). For this purpose, we use the Metropolis-Hasting algorithm. As the candidate, we use the Weibull distribution with the shape parameter α(t). Hence, the acceptance rate Awi, becomes

Employing the Metropolis-Hasting algorithm, wnew has a little chance for acceptance in each iteration when |y∗∗i| gets large. Therefore, we use a rejection-acceptance sampling scheme in mth cycle of the SEM algorithm at the t-th iteration of the proposed EM algorithm to generate from the posterior distribution of Wi given y∗∗i and α(t); for i=1,…,n. For this, we notice that fWi|Y∗∗i(wi∣∣y∗∗i,α(t))∝fY∗∗i|Wi(y∗∗i|wi)fWi(wi) and the pdf fY∗∗i|Wi(y∗∗i|wi) is bounded by some value independent of wi, i.e.,

So, the rejection-acceptance sampling scheme to generate from fWi|Y∗∗i(wi∣∣y∗∗i,α(t)) is given by the following.

It should be noted that the constant K must be large enough. Using K=100, the quantities E(t)ri; for r=0,1,2 and i=1,…,n, are approximated very accurately.