The age of big data has produced data sets that are computationally expensive to analyze. To deal with such large-scale data sets, the method of algorithmic leveraging proposes that we sample according to some special distribution, rescale the data, and then perform analysis on the smaller sample. Ma, Mahoney, and Yu (2015) provides a framework to determine the statistical properties of algorithmic leveraging in the context of estimating the regression coefficients in a linear model with a fixed number of predictors. In this paper, we discuss how to perform statistical inference on regression coefficients estimated using algorithmic leveraging. In particular, we show how to construct confidence intervals for each estimated coefficient and present an efficient algorithm for doing so when the error variance is known. Through simulations, we confirm that our procedure controls the type I errors of significance tests for the regression coefficients and show that it has good power for those tests. 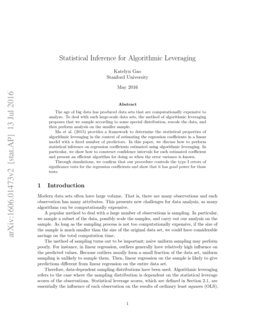 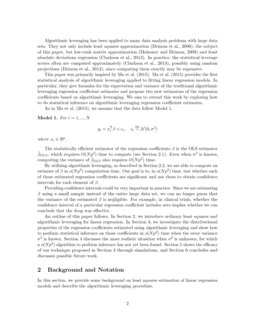 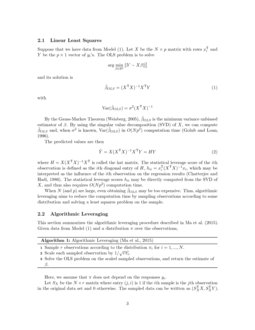 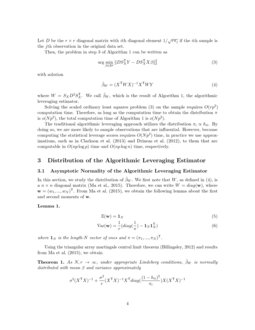 A Statistical Perspective on Algorithmic Leveraging

Simulating the Power of Statistical Tests: A Collection of R Examples

This paper illustrates how to calculate the power of a statistical test ...
Florian Wickelmaier, et al. ∙

Group Inference in High Dimensions with Applications to Hierarchical Testing

Group inference has been a long-standing question in statistics and the ...
Zijian Guo, et al. ∙

Algorithmic leveraging refers to the special case where the probability an observation is sampled is positively correlated with the influence of each observation on the results of data analysis. The definition of influence varies based on the data analysis problem considered.

Previous literature has primarily been concerned with estimation, providing high probability bounds on errors. However, in many practical regression settings, we also would like to perform uncertainty quantification. Therefore, in this paper we explore how to efficiently construct confidence intervals and tests of significance for the estimated coefficients. We utilize the framework of Ma et al. [9], which computes the expectation and variance of algorithmic leveraging estimates for linear regression.

Assume that the data come from the following model.

where xi∈Rp are the p predictors and yi∈R are the responses.

The statistically efficient estimator of the regression coefficient vector

^βOLS, which requires O(Np2) time to compute (see Section 2.1). When both N and p are large, that would be expensive. This is why a data reduction method like algorithmic leveraging is desirable.

In this section, we provide some background on least squares estimation of linear regression models and describe algorithmic leveraging as applied to that problem. We end with a characterization of the distribution of the resulting regression coefficient estimates.

Let vj indicate the jth entry of a vector v, and (M)ij indicate entry (i,j) of a matrix M.

Suppose that we have data from Model (1). Let X be the N×p matrix with rows xTi and Y be the N-dimensional vector of yi’s. The OLS problem is

and its solution is

is the minimum variance unbiased estimator of

. By using the singular value decomposition (SVD) of

Let the OLS fitted values be

where H=X(XTX)−1XT is called the hat matrix.

This section summarizes the traditional algorithmic leveraging procedure for linear regression. Given data from Model (1) and a distribution π over the observations, we execute Algorithm 1.

Note that in theory r could be any natural number, but in practice we would choose r<N.

The ideal distribution πi∝hii; by doing so, we are more likely to sample observations that are influential. Because computing the statistical leverage scores requires O(Np2) time, in practice, approximations such as those of Clarkson et al. [3] and Drineas et al. [4] are used; they are computable in O(Nplogp) time and O(NplogN) time, respectively.

However, for our theoretical results we do not assume that π was computed using either of the above algorithms. We only assume that π is not dependent on the responses and that π does not have any entries equal to zero.

Then, step 3 of Algorithm 1 can be written as

For convenience, we call the result of Algorithm 1, ^βW, the algorithmic leveraging estimate.

Suppose that as N→∞, XTX/N converges to a finite positive definite matrix and limN→∞(∑Ni=1xixTi)−1xixTi=0. Then as r,N→∞, ^βW is approximately distributed as

This theorem can be used to construct confidence intervals for each element of β that have the correct coverage probability as r and N approach infinity. However, doing so requires computing (XTX)−1, which requires O(Np2) computation time, and thus we proceed in a different direction.

Because the main bottleneck in applying Theorem 1 to construct confidence intervals is in computing the variance of ^βW, we could consider using the bootstrap as follows. For a total of B times, the bootstrap samples with replacement N observations from the data set and applies Algorithm 1 to the sample. Then, for j=1,…,p

δj of the jth coordinate of the algorithmic leveraging estimates is computed; the level 1−α bootstrap confidence interval for βj is constructed as

where z1−α/2 is the 1−α/2quantile of the standard normal distribution. The corresponding test of significance would be to reject the null hypothesis βj=0 when |(^βW)j|>z1−α/2δj.

However, since in practice we must use fairly large values of B, usually at least on the order of 102, the computational complexity of the bootstrap procedure is at least O(BN). It is more expensive than our proposal presented in the next section, and we show that experimentally it may not lead to valid confidence intervals. Moreover, the asymptotic guarantees of the bootstrap would require both N and r to approach infinity, while our proposal’s guarantees only require r to approach infinity.

This section presents our proposed approach for uncertainty quantification for the algorithmic leveraging estimator ^βW, both when the error variance σ2 is known and when it is unknown.

By the argument in the previous paragraph, using the following theorem, we can get exact confidence intervals for each element of β in O(Np) time.

For 0<α<1, an exact level 1−α confidence interval for βj based on ^βW is

By the correspondence between confidence intervals and hypothesis testing, in o(Np2) time we can also test for the significance of each regression coefficient estimated by algorithmic leveraging using, for j=1,…,p, the hypothesis H0:βj=0. Specifically, a test with significance level α rejects H0 when

In practice, the error variance is rarely known. In this section, we discuss this more realistic situation.

We estimate σ2 analogously to OLS. Letting ^YW=X^βW=Xβ+HWϵ be the predicted values, define

Classical statistical inference, which allows us to find exact confidence intervals for regression coefficients, computes the exact distribution of ^σ2. However, in our case, that distribution depends on the singular values of I−HW, which in general cannot be computed in o(Np2) time. Instead, we utilize Lemma 1, which states that for r large enough, with probability one W≈IN, where IN is the N

Intuitively, we may make the approximation that W≈IN. Then, HW≈H, the hat matrix from OLS, and our estimates ^βW and ^σ2

approximate the regression coefficients and standard error estimate from OLS.

These confidence intervals have the correct coverage probability asymptotically as r approaches infinity.

If X has full rank, as r→∞, the confidence interval (9) has coverage probability 1−α.

By the argument in the previous section and the fact that ^σ2 is computed in O(Np) time, the above confidence interval can be computed in o(Np2) time. As before, in o(Np2) time we can also test for the significance of each regression coefficient estimated by algorithmic leveraging using, for j=1,…,p, the hypothesis H0:βj=0. Specifically, we propose a test with approximate significance level α that rejects H0 when

In this section, we illustrate the behavior of our proposed confidence intervals (9) and significance tests (10) and compare them to the bootstrap. Our experiments were carried out in R, using the special package mvtnorm [6]. They follow the same setup as in Ma et al. [9].

-distribution with three degrees of freedom and covariance matrix

Σ, where (Σ)i,j=2×0.5|i−j|. This will give a matrix X with some large statistical leverage scores and some small ones [9]. The sampling distribution π was chosen to be proportional to the approximate leverage scores ~hii computed using the algorithm in Drineas et al. [4].

For each p, we randomly choose half the entries of β to be zero, a quarter to be +1, and the rest to be −1. Then, for each tuple (X,β) we repeat the following procedure 100 times:

Finally, for each tuple (p,N,r,α), for both our algorithm and bootstrap we compute the averages of the computation times, actual coverage probabilities, and proportions of type 1 and type 2 errors over the 100 iterations.

The graphs are shown in Figures 1–4. In Section 6.5, for each pair of values of N and p, we also present plots of the receiver operating characteristic (ROC) curve for various values of r

for both our algorithm and the bootstrap. We defer them to the appendix because they are usually used to evaluate classifiers and not methods for uncertainty quantification.

We see that our algorithm is indeed faster than the bootstrap, with the gap widening as r increases. Indeed, the rate of increase in computation time is greater for the bootstrap.

Learning from and mining massive data sets post great challenges given our limited storage and computational resources. Many data reduction approaches have been devised to overcome such challenges. Algorithmic leveraging is such an approach. In this paper, for linear regression coefficients estimated using algorithmic leveraging, we described how to efficiently construct finite sample confidence intervals and significance tests. Simulations show that our proposed confidence intervals have the desired coverage probability and our proposed significance tests control the type 1 error rate and have low type 2 error rates. The simulations also show that bootstrap confidence intervals may have smaller than the desired coverage probability.

There are several avenues for future work investigating the statistical properties of algorithmic leveraging applied to data analyses beyond simple linear regression. For instance, we believe that determining how sampling affects feature selection in Lasso regression

[11] could have important practical implications. Finally, we may consider uncertainty quantification for estimates from other data reduction methods, such as sketching algorithms, which are another popular method to deal with massive data sets.

We apply the strong law of large numbers

Thus, w is the average of r

independent and identically distributed random variables. Each has mean

1N, since (SX)ji is 1 with probability πj. The result follows.

We first need the following lemma from Ma et al. [9].

Since Var(w)=O(1/r), it follows that w converges in probability to 1N as r→∞ with N fixed.

We rewrite ^βW. Let ϵ be the N-dimensional vector of ϵi’s.

By Slutsky’s Theorem [1] and Lemma 1, as r→∞ for fixed N, XTWX/N converges in probability to XTX/N. We have assumed that as N→∞, XTX/N converges to a finite, positive definite matrix M.

With N fixed, as r→∞, XTWϵ/N converges in probability to XTϵ/N.

where xiϵi has mean zero and variance σ2xixTi. We have assumed that as N→∞, σ2∑Ni=1xixTi/N converges to σ2M. Assuming that for each i=1,…,N,

Hence, as r,N→∞, XTWϵ/N is normally distributed. Then, ^βW is asymptotically Gaussian. Its mean and variance are computed from approximate formulas given in Ma et al. [9], using the fact that as r→∞ and N is fixed w converges in probability to 1N.

Taking expectation of the above equation with respect to W, we have

from which the result follows.

Considering only the jth predictor and scaling appropriately, we have

Applying the continuous mapping theorem, we have

where the last line follows from [12] assuming that X is full rank.

Here are the ROC curves for the simulations in the main paper.