Attackers have developed ever more sophisticated and intelligent ways to hack information and communication technology systems. The extent of damage an individual hacker can carry out upon infiltrating a system is well understood. A potentially catastrophic scenario can be envisaged where a nation-state intercepting encrypted financial data gets hacked. Thus, intelligent cybersecurity systems have become inevitably important for improved protection against malicious threats. However, as malware attacks continue to dramatically increase in volume and complexity, it has become ever more challenging for traditional analytic tools to detect and mitigate threat. Furthermore, a huge amount of data produced by large networks has made the recognition task even more complicated and challenging. In this work, we propose an innovative statistical analysis driven optimized deep learning system for intrusion detection. The proposed intrusion detection system (IDS) extracts optimized and more correlated features using big data visualization and statistical analysis methods (human-in-the-loop), followed by a deep autoencoder for potential threat detection. Specifically, a pre-processing module eliminates the outliers and converts categorical variables into one-hot-encoded vectors. The feature extraction module discard features with null values and selects the most significant features as input to the deep autoencoder model (trained in a greedy-wise manner). The NSL-KDD dataset from the Canadian Institute for Cybersecurity is used as a benchmark to evaluate the feasibility and effectiveness of the proposed architecture. Simulation results demonstrate the potential of our proposed system and its outperformance as compared to existing state-of-the-art methods and recently published novel approaches. Ongoing work includes further optimization and real-time evaluation of our proposed IDS. 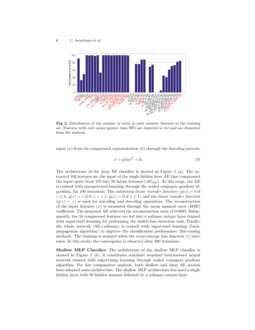 The heterogeneity of data in modern networks and variety of new protocols have made the intrusion detection ever more complex and challenging. In this context, there is a great deal of interest in developing intelligent, robust and efficient Intrusion Detection Systems (IDS) capable of identifying the potential or unforeseen threat and consequently denying access to the system. In the literature, traditional machine learning algorithms have been widely employed to develop IDS

[19]. However, these techniques are based on handcrafted features by expert users and remain deficient to handle high-dimensional volume of training data. Deep learning (DL) is an advanced machine learning technique that addresses the limitations of shallow machine learning algorithms [11] by learning feature representation at varying level of granularity directly from raw input data through a deep hierarchical structure. Since DL has shown to achieve human-level performances in several real-world applications (i.e. health care [7],[13]

, a deep autoencoder and a shallow multilayer perceptron (MLP) classifier are used to classify different categories of the NSL-KDD dataset (Normal, DoS, R2L, Probe). The deep AE and shallow MLP classifiers are compared with four recent models which have been on NSL-KDD dataset. Experimental results (Table

5) showed that the deep AE classifier outperformed all other approaches and achieved accuracy up to 87%.

The KDD99 and NSL-KDD datasets have been widely employed as benchmarks to assess the performance and effectiveness of different intrusion detection models. Alrawashdeh et al. [3]

developed a deep belief network (DBN) based on Restricted Boltzmann Machine (RBM) modules, followed by a multi-class softmax layer. The model was tested on 10% of the KDD99 test dataset and achieved a detection accuracy up to 97.9% with a false alarm rate of 2.47%. Tang et al.

[10] developed a different DNN architecture (with 4 hidden layers and 100 hidden units) and optimized trained using adam optimization algorithm. However, the performance was measured using the KDD99 dataset. Javaid et al. [9] proposed a self-taught learning (STL) approach based on sparse autoencoders for anomaly detection. The NSL-KDD dataset was employed as benchmark to quantify the performance. In [22]

proposed a novel DL architecture based on autoencoders for attack detection in fog-to-things computing, using the NSL-KDD. However, the evaluation restricted to binary detection (normal, anomaly) only. In this paper, we propose an innovative statistical driven deep learning method for detecting network intrusion. The NSL-KDD dataset is used to estimate the reliability of the model for binary and multi-class classification and aforementioned limitations have been addressed.

The flowchart of the proposed method is illustrated in Figure 1. The KDD dataset is first filtered by eliminating the outliers, followed by the transformation of categorical features into one-hot-encoded vectors. Afterwards a statistical analysis has been carried out over 38 numeric features in order to extract more correlated features. Finally, a deep and shallow classifiers are employed to test the detection accuracy.

Removing outliers from the dataset before performing the data normalization has proven to be an essential task. This operation removes inconsistent values that makes the learning difficult. In this study, the Median Absolute Deviation (MAD) estimator is used for detecting the outliers. It is defined as follow:

where C=1.4826 is a multiplicative constant typically used under the assumption of data normality and xij is the instance belonged to the feature xi.

Specifically, xij was considered an outlier when xij > k∗MAD (with k=10). The original size of training and testing sets was reduced from 125973 to 85421 and from 22544 to 11925 , respectively. Table 3 summarizes the dataset after removing outliers. It is to be noted that, the dataset is highly unbalanced with only 18 test samples in the U2R attack class. Therefore, the final dataset removed U2R class.

Since features x2, x3, x4 (protocol type, service and flag) consist of categorical values, these features were converted into one hot encoded vectors. For example, the protocol type feature includes 3 attributes: tcp, udp and icmp, and were represented as (1,0,0),(0,1,0),(0,0,1), respectively. Similarly, service and flag features were represented by binary values. This procedure maps the 41-dimensional features into 122-dimensional features: 38 continuous and 84 with binary values associated to the 3 categorical features ( protocol, flag, and service).

Several feature extraction techniques exist in literature (i.e.[12]). However, in this study, the proposed feature extraction module selects the most correlated features according to the following procedure. Firstly, the percentage of null values are quantified for 38 numeric features vectors. The histogram in Figure 2 shows the distribution of zeros of each numeric feature in the training set. In this study, variables with number of zeros greater than 80 % are not included in the analyses.It is to be noted that 20 features (depicted in red in Figure 2 ) out of 38 consists of mostly zeros which are discarded. Therefore, the remaining 18 numeric features are combined with 84 one-hot-encoded features forming 102-dimensional input vector for deep AE and shallow MLP classifier.

In this section, two machine learning algorithms are presented to classify different categories of the NSL-KDD dataset (Normal, DoS, R2L and Probe). Specifically, a deep architecture based on Autoencoder and a shallow architecture based on standard Multi Layer Perceptron are implemented. Details of the proposed frameworks are described in the following subsections.

An autoencoder is a type of unsupervised learning algorithm, typically used for dimensionality reduction purposes. The AE standard configuration includes one input layer, one output layer and one hidden layer, as showed in Figure

3 (a). It compresses the input data x into a lower dimension h through the encoding process:

are the input vector, weight matrix, the bias vector, respectively and

is the activation function. Then, it attempts to reconstruct the same set of input (

x) from the compressed representation (h) through the decoding process:

The architecture of the deep AE classifier is showed in Figure 3 (a). The extracted 102 features are the input of the single hidden layer AE that compressed the input space from 102 into 50 latent features (AE[50]). At this stage, the AE is trained with unsupervised learning through the scaled conjugate gradient algorithm, for 100 iterations. The saturating linear transfer function (g(z)=0 if z≤0, g(z)=z if 0<z<1, g(z)=0 if z≥1) and the linear transfer function (g(z)=z) is used for encoding and decoding operations. The reconstruction of the input features (x

) is measured through the mean squared error (MSE) coefficient. The proposed AE achieved the reconstruction error of 0.0083. Subsequently, the 50 compressed features are fed into a softmax output layer trained with supervised learning for performing the multi-class detection task. Finally, the whole network (AE+softmax) is trained with supervised learning (backpropagation algorithm) to improve the classification performance (fine-tuning method). The training is stopped when the cross-entropy loss function

[6] saturates. In this study, the convergence is observed after 300 iterations.

where true positives (TP) represent the number of anomalous samples correctly identified as anomaly; true negatives (TN) represent the number of normal samples correctly identified as normal; false positives (FP) are the number of normal samples missclassified as anomaly; false negatives (FN) are the number of anomaly samples missclassified as normal. Table 4 reports the outcome of the experiments. The shallow MLP classifier showed good performances in detecting Normal, Dos and Probe categories, reporting F_measure values of 87.10%, 97.08%, 77.13%, respectively. However remained deficient to classify the R2L attack class accurately ( achieving F_measure of 11.74%).The deep AE classifier achieved better results in terms of F_measure rate in all categories, with performances up to 98%. To find out the most optimal AE architecture, different numbers of hidden layers were tested. Specifically, the performance of the proposed deep AE classifier (having one layer) with 50 hidden neurons (AE[50]) was compared with a two hidden layers AE architecture (with 50 and 25 hidden neurons respectively, AE[50,25]) and a three hidden layers AE architecture (with 50, 25, 12 hidden neurons respectively, AE[50,25,12]). Experimental results showed that the AE[50] classifier achieved the best accuracy of 87% as compared to accuracies achieved by AE[50,25] (82%) and AE[50,25,12] (81%), this is possibly due to over compression in multilayered AE.

The proposed approach leverages the complementary strengths of both automated feature engineering (provided by deep learning) and manual statistical driven optimized feature engineering (based on human-in-the-loop and big data visualization) that helps the learning model to better correlate the input-output relationship. Specifically, we introduced a statistical analysis driven optimized DL system for intrusion detection. The NSL-KDD dataset was employed as benchmark to identify normal and abnormal network traffic patterns. The most correlated features were extracted using statistical methods and were the input of a deep AE classifier. The feasibility and effectiveness of the proposed model were evaluated using precision, recall, F_measure and accuracy metrics. The comparative evaluation of proposed deep autoencoder with a shallow MLP classifier and state-of-the-art models showed that the proposed deep AE classifier outperformed all other approaches and achieved upto 87% accuracy. Future works include a more robust system capable of handling real-time traffic similar to NSL-KDD dataset to contextually detect intrusions in real-time applications. In addition, to concurrently acquire long-term learning, fast decision making, and low computational complexity for real-time Big Data processing, we intend to integrate the proposed work with our previously presented real-time autonomous decision making system [2].