The consistency of the Aalen--Johansen-derived estimator of state occupation probabilities in non-Markov multi-state settings is studied and established via a new route. This new route is based on interval functions and relies on a close connection between additive and multiplicative transforms of interval functions, which is established. Under certain assumptions, the consistency follows from explicit expressions of the additive and multiplicative transforms related to the transition probabilities as interval functions, which are obtained, in combination with certain censoring and positivity assumptions. 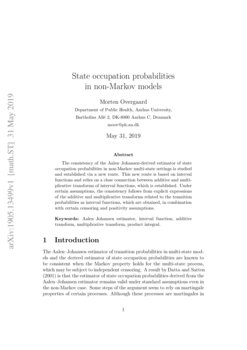 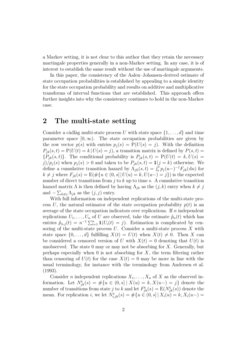 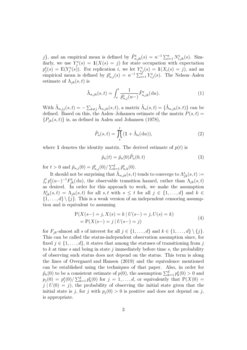 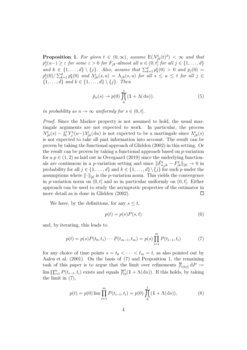 Violations of the Markov assumption in multi-state models are not uncomm...
N. Maltzahn, et al. ∙

The Aalen–Johansen estimator of transition probabilities in multi-state models and the derived estimator of state occupation probabilities are known to be consistent when the Markov property holds for the multi-state process, which may be subject to independent censoring. A result by Datta and Satten (2001) is that the estimator of state occupation probabilities derived from the Aalen–Johansen estimator remains valid under standard assumptions even in the non-Markov case. Some steps of the argument seem to rely on martingale properties of certain processes. Although these processes are martingales in a Markov setting, it is not clear to this author that they retain the necessary martingale properties generally in a non-Markov setting. In any case, it is of interest to establish the same result without the use of martingale arguments.

In this paper, the consistency of the Aalen–Johansen-derived estimate of state occupation probabilities is established by appealing to a simple identity for the state occupation probability and results on additive and multiplicative transforms of interval functions that are established. This approach offers further insights into why the consistency continues to hold in the non-Markov case.

. The state occupation probabilities are given by the row vector

With full information on independent replications of the multi-state process U, the natural estimator of the state occupation probability p(t) is an average of the state occupation indicators over replications. If n independent replications U1,…,Un of U are observed, take the estimate ^pn(t) which has entries ^pn,j(t)=n−1∑ni=11(Ui(t)=j). Estimation is complicated by censoring of the multi-state process U. Consider a multi-state process X with state space {0,…,d} fulfilling X(t)=U(t) when X(t)≠0. Then X can be considered a censored version of U with X(t)=0 denoting that U(t) is unobserved. The state 0 may or may not be absorbing for X. Generally, but perhaps especially when 0 is not absorbing for X, the term filtering rather than censoring of U(t) for the case X(t)=0 may be more in line with the usual terminology, for instance with the terminology from Andersen et al. (1993).

denotes the identity matrix. The derived estimate of

It should not be surprising that ^Λn,jk(s,t) tends to converge to Λcjk(s,t):=∫tspcj(u−)−1Fcjk(du), the observable transition hazard, rather than Λjk(s,t) as desired. In order for this approach to work, we make the assumption Λcjk(s,t)=Λjk(s,t) for all s,t with s≤t for all j∈{1,…,d} and k∈{1,…,d}∖{j}. This is a weak version of an independent censoring assumption and is equivalent to assuming

for Fjk-almost all s of interest for all j∈{1,…,d} and k∈{1,…,d}∖{j}. This can be called the status-independent observation assumption since, for fixed j∈{1,…,d}, it states that among the statuses of transitioning from j to k at time s and being in state j immediately before time s, the probability of observing such status does not depend on the status. This term is along the lines of Overgaard and Hansen (2019) and the equivalence mentioned can be established using the techniques of that paper. Also, in order for ^pn(0) to be a consistent estimate of p(0), the assumption ∑dk=1pck(0)>0 and pj(0)=pcj(0)/∑dk=1pck(0) for j=1,…,d, or equivalently that P(X(0)=j|U(0)=j), the probability of observing the initial state given that the initial state is j, for j with pj(0)>0 is positive and does not depend on j, is appropriate.

Since the Markov property is not assumed to hold, the usual martingale arguments are not expected to work. In particular, the process is not expected to be a martingale since Λcjk(s) is not expected to take all past information into account. The result can be proven by taking the functional approach of Glidden (2002) in this setting. Or the result can be proven by taking a functional approach based on p-variation for a p∈(1,2) as laid out in Overgaard (2019) since the underlying functionals are continuous in a p-variation setting and since ∥^Fcn,jk−Fcjk∥[p]→0 in probability for all j∈{1,…,d} and k∈{1,…,d}∖{j} for such p under the assumptions where ∥⋅∥[p] is the p-variation norm. This yields the convergence in p-variation norm on (0,t] and so in particular uniformly on (0,t]. Either approach can be used to study the asymptotic properties of the estimator in more detail as is done in Glidden (2002). ∎

We have, by the definitions, for any s≤t,

and, by iterating, this leads to

which is consistently estimated by the Aalen–Johansen estimators of the state occupation probabilities under some assumptions according to Proposition 1, establishing the desired result. As a consequence of Theorem 5 below the limit lim∏mi=1P(ti−1,ti) exists and equals \prodit0(1+Λ(du)) as desired under an upper continuity requirement and a bounded variation requirement on the Pjks.

On a side note, the identity (7) for the empirical distribution with time points t1,…,tm at transition times also explains why the Aalen–Johansen estimators of state occupation probabilities are simply the observed proportions in the uncensored case as also established in section IV.4.1.4 of Andersen et al. (1993).

3 Interval functions and their transforms

The concept of interval functions, as known partly from Gill and Johansen (1990) but especially from Dudley and Norvaiša (2011), will be at the core of the argument presented here. Consider an interval J⊆R and the set of all subintervals of J, denoted J. An interval function is a function defined on such a J. The interval functions we will consider here map into R or, more generally, into the vector space of d×d matrices, M, which will be equipped with the maximum norm and the standard matrix multiplication. We let 1∈M denote the identity matrix. With 1 as the identity element, M is a unital Banach algebra, satisfying ∥xy∥≤∥x∥∥y∥ for elements x,y∈M, and M can be considered any general unital Banach algebra in the following.

We use the notation A<B for intervals A,B∈J if a<b for any choices of a∈A and b∈B. Two types of interval functions are important here:

Since M is not generally commutative, the order of multiplication matters in the definition of a multiplicative interval function and here the stated definition is used in line with Gill and Johansen (1990)

but at odds with the definition preferred by

A partition A of an interval A∈J is a finite set A={Ai}mi=1 of subintervals A1<A2<⋯<Am of A such that ∪mi=1Ai=A. A variation concept for interval functions is defined by

If both A and B are partitions of an interval A, B is called a refinement of A if any B∈B is a subinterval of an interval in A. For an interval A, |A| is the length of the interval, and for a partition A={Ai}mi=1 the mesh is |A|=maxi|Ai|. Consider a function S which associates any partition, A, of an interval A with an element S(A)∈M. Two notions of a limit will be of interest:

Examples of S as considered above are S(μ;A)=∑A∈Aμ(A) and S(μ;A)=∏A∈Aμ(A)=μ(A1)μ(A2)⋯μ(Am) for partitions A={Ai}mi=1 of J with A1<A2<⋯<Am for an interval function μ:J→M. Limits of these S lead to what will be called additive and multiplicative transforms of μ.

At this stage it is worth noting that what we are ultimately looking for is to establish the existence of a multiplicative transform of P as an interval function with an expression as a product integral. Also, the product integral \prodits(1+Λ(du)) corresponds to the evaluation \prodi(s,t]d(1+Λ) of the multiplicative transform of 1+Λ seen as an interval function.

In the following, somewhat stricter versions of the additive and multiplicative transforms will be useful.

An important result is the following.

A function f:J→R is said to be regulated if it has limits from the left as well as from the right everywhere where applicable, potentially including at −∞ and ∞ if J is unbounded. In particular, a regulated function is bounded and has at most a finite number of jumps larger than any fixed ε>0. A second important result is the following.

Consider an interval function μ:J→R which is upper continuous at ∅ and has bounded variation and which has a strict additive transform, ˇμ. Consider also a regulated function f:J→R. Define an interval function ν by ν(A)=f(u)μ(A) when left end point u of A is in A and by ν(A)=f(u+)μ(A) when u is not in A. Then ν has a strict additive transform, ˇν, which is given by the Kolmogorov integral ˇν(A)=∫Afdˇμ.

Since ˇμ will be additive, upper continuous and of bounded variation and f is regulated, the Kolmogorov integral ∫Afdˇμ exists as a consequence of Theorem 2.20 and Proposition 2.25 of Dudley and Norvaiša (2011). The Kolmogorov integral satisfies ∥∫Afdˇμ∥≤sups∈A|f(s)|∥ˇμ∥(1)(A), where ∥⋅∥(1)(A) is the variation on A. We will consider a partition A of J with elements of the form {ti} and (ti−1,ti). Such a partition is called a Young partition in Dudley and Norvaiša (2011). Since f is regulated we can, according to Theorem 2.1 of Dudley and Norvaiša (2011), find such a partition A such that the oscillation of f on the interval (ti−1,ti), sups,u∈(ti−1,ti)∥f(s)−f(u)∥, does not exceed a given ε>0 for any i. Potentially by a refinement, we can take A such that also ∑B∈B∥μ(B)−ˇμ(B)∥<ε for any refinement B of A since ˇμ is the strict additive transform of μ. Now, consider any refinement B of A and let sB denote any member of B∈B and, if u is the left end point of B∈B, let yB=f(u) if u∈B and yB=f(u+) if u∉B. We then have the conclusion that

which can be made arbitrarily small by an appropriate choice of ε. ∎

Since ˇμ is upper continuous and of bounded variation under the assumptions of Theorem 3 and since a regulated function is bounded and Borel measurable, the Kolmogorov integral of the theorem also corresponds to the Lebesgue-Stieltjes integral.

The concept of a random interval function on probability space (Ω,F,P) can be introduced as a function μ:Ω×J→R such that ω↦μ(ω;A) is F-Borel measurable for all A∈J. This concept will be useful in the following.

4 Statement and proof of main result

For a given j, assume Fjk(J)<∞ for all k≠j. Then Fjk is the strict additive transform of Qjk for all k≠j.

for n→∞ by dominated convergence since ∑A∈An|Mjk(A)−Njk(A)|≤2∑h≠jNjh(J), which is integrable under the assumption. In particular, S(A):=∑A∈A|Qjk(A)−Fjk(A)| has limit lim|A|→0S(A)=0 in mesh and so over refinements, which is the requirement for Fjk to be the strict additive transform of Qjk. ∎

As a consequence of Proposition 4 and the argument found in the proof of Theorem 2, we obtain ∥Qjk∥(1)≥Fjk(J) when Fjk(J)<∞, but this conclusion holds generally in the sense that Fjk(J)=∞ implies ∥Qjk∥(1)=∞ which can be seen as a result of Fatou’s lemma. From the point-wise bound ∥Mjk(ω;⋅)∥(1)(A)≤∑h≠jNjh(ω;A), we obtain ∥Qjk∥(1)≤∑h≠jFjh(J) also.

The main result is given as follows. Recall that we are considering a bounded interval J=(0,τ].

Assume P−1 is upper continuous at ∅ and of bounded variation. Then Λ is the strict additive transform of P−1.

Next, an interval partition of J is considered. As an open set relative to J, Jj+ is the countable union of open intervals, open relative to J. According to Lemma 9 of the appendix, if [t0,t1)⊆Jj+ and t1∈Jj0 then either Λjk([t0,t1))=∞ for some k≠j if pj(t1−)=0 or ∑k≠jΛjk([t1,t1])=1 if pj(t1−)>0. The first case cannot be encountered and the second case can only be encountered a finite number of times on J since Λjk is dominated by ∥Pjk∥(1)<∞ for all k≠j on these types of intervals. This means that Jj+ is actually a union of finitely many open intervals and this implies the existence of a partition J=U1∪{u1}∪U2∪⋯∪Um∪{um} with open intervals Ui⊆Jj0 or Ui⊆Jj+ and with um=τ. Additionally, we necessarily have pj(ui−)>0 for all i. The existence of such a partition also means that Λjk(J)≤∥Pjk∥(1)<∞ can easily be established from the results above.