Population protocols are a model of computation in which an arbitrary number of anonymous finite-state agents are interacting in order to decide by stable consensus if an initial configuration extended with some extra agents called leaders satisfies some property. In this paper, we focus on n-counting predicates that ask, given an initial configuration, if the number of agents in a given state is at least n. In a recent work it was exhibited for infinitely many n, a population protocol with at most O(loglog(n)) states that decides the n-counting predicate. We prove that this bound is almost optimal, by observing that any population protocol deciding such a predicate requires at least Ω((loglog(n))^1/3) states. 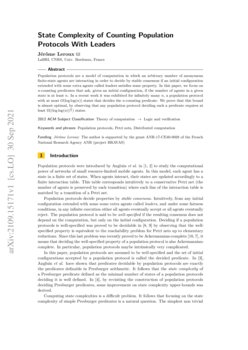 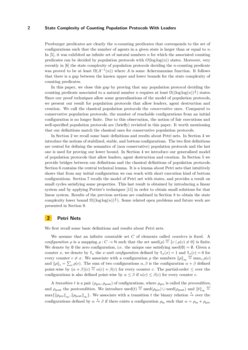 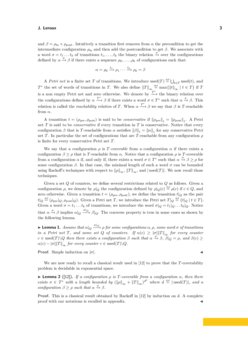 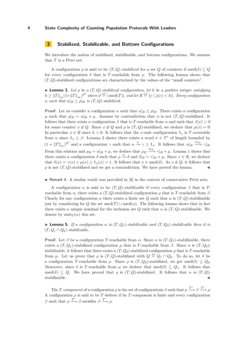 Lower Bounds on the State Complexity of Population Protocols

Population protocols are a model of computation in which an arbitrary nu...
Philipp Czerner, et al. ∙

I survey our recent work on the verification of population protocols and...
Javier Esparza, et al. ∙

Over the years, population protocols with the goal of reaching consensus...
Nan Kang, et al. ∙

A Classification of Weak Asynchronous Models of Distributed Computing

Population protocols are a model of distributed computation in which fin...
Philipp Czerner, et al. ∙

Population protocols were introduced by Angluin et al. in [DBLP:conf/podc/AngluinADFP04, DBLP:journals/dc/AngluinADFP06] to study the computational power of networks of small resource-limited mobile agents. In this model, each agent has a state in a finite set of states. When agents interact, their states are updated accordingly to a finite interaction table. This table corresponds intuitively to a conservative Petri net (the number of agents is preserved by each transition) where each line of the interaction table is matched by a transition of a Petri net.

In Section 2 we recall some basic definitions and results about Petri nets. In Section 3 we introduce the notions of stabilized, stable, and bottom configurations. The two first definitions are central for defining the semantics of (non conservative) population protocols and the last one is used for proving our lower bound. In Section 4 we introduce our generalized model of population protocols that allow leaders, agent destruction and creation. In Section 5 we provide bridges between our definitions and the classical definitions of population protocols. Section 6 contains the central technical lemma. It is a lemma about Petri nets that intuitively shows that from any initial configuration we can reach with short execution kind of bottom configurations. Section 7 recalls the model of Petri net with states, and provides a result on small cycles satisfying some properties. This last result is obtained by introducing a linear system and by applying Pottier’s techniques [Pottier:1991:MSL:647192.720494] in order to obtain small solutions for that linear system. Results of the previous sections are combined in Section 8 to obtain the state complexity lower bound Ω((loglog(n))13). Some related open problems and future work are presented in Section 9.

We first recall some basic definitions and results about Petri nets.

A Petri net is a finite set T of transitions. We introduce used(T){\tiny{def}}=⋃t∈Tused(t), and T∗ the set of words of transitions in T. We also define ∥T∥∞{\tiny{% def}}=max{∥t∥∞∣t∈T} if T is a non empty Petri net and zero otherwise. We denote by T∗−→ the binary relation over the configurations defined by αT∗−→β if there exists a word σ∈T∗ such that ασ→β. This relation is called the reachability relation of T. When αT∗−→β we say that β is T-reachable from α.

Given a set Q of counters, we define several restrictions related to Q as follows. Given a configuration ρ, we denote by ρ|Q the configuration defined by ρ|Q(c){\tiny{def}}=ρ(c) if c∈Q, and zero otherwise. Given a transition t=(ρpre,ρpost), we define the transition t|Q as the pair t|Q{\tiny{def}}=(ρpre|Q,ρpost|Q). Given a Petri net T, we introduce the Petri net T|Q{\tiny{def}}={t|Q∣t∈T}. Given a word σ=t1…tk of transitions, we introduce the word σ|Q=t1|Q…tk|Q. Notice that ασ→β implies α|Qσ|Q−−→β|Q. The converse property is true in some cases as shown by the following lemma. Assume that α|Qσ|Q−−→ρ for some configurations α,ρ, some word σ of transitions in a Petri net T, and some set Q of counters. If α(c)≥|σ|∥T∥∞ for every counter c∈used(T)∖Q then there exists a configuration β such that ασ→β, β|Q=ρ, and β(c)≥α(c)−|σ|∥T∥∞ for every counter c∈used(T)∖Q.

This is a classical result obtained by Rackoff in [DBLP:journals/tcs/Rackoff78] by induction on d. A complete proof with our notations is recalled in appendix. ∎

We introduce the notion of stabilized, stabilizable, and bottom configurations. We assume that T is a Petri net.

A similar result was provided in [DBLP:conf/podc/CzernerE21] in the context of conservative Petri nets.

In this section, we introduce our model of population protocols and some related notions.

A n-counting predicate where n is a positive natural number is a set of configurations of the form {m1x∣m≥n} for some counter x. It is proved in [DBLP:conf/stacs/BlondinEJ18] that there exists an infinite set N of positive numbers such that for every n∈N, there exists a conservative population protocol Pn deciding a n-counting predicate such that |used(Pn)|≤O(loglog(n)). In this paper, we show that this result is almost optimal by proving the following theorem. For every population protocol P=(T,ρL,I,F) deciding a n-counting predicate, we have the following bound where d=|used(P)|:

[[DBLP:conf/stacs/BlondinEJ18]] The 2d-counting predicates can be decided by conservative leaderless population protocols as follows. We consider d+2 distinct counters denoted as c0,c20,…,c2d, and we let Q be the set of those counters. We introduce the Petri net T{\tiny{def}}=T0∪T1 where:

Following [DBLP:conf/podc/CzernerE21], a T-execution is said to be T-fair if for every configuration ρ we have:

Given a configuration ρ, we introduce the set stab′T(ρ) as the union of the sets of counters limit-used by T-fair T-executions from ρ. Let T be a conservative Petri net. We have stab′T(ρ)=stabT(ρ) for every configuration ρ.

The following lemma provides the bridges. A conservative population pre-protocol is well-specified if and only if it is correctly-specified. Moreover, in that case the predicate decided and the predicate accepted coincide.

This is a direct corollary of Lemma 5. ∎

In this section we prove the following theorem that intuitively provides a way to reach with short words kind of bottom configurations with small size (small and short meaning doubly-exponential in that context). Other results proved in this section are only used for proving this theorem and are no longer used in the sequel. Let T be a Petri net, let d{\tiny{def}}=|used(T)|, let ρ be a configuration, and let b{\tiny{def}}=(4+4∥T∥∞+2∥ρ∥∞)dd(1+(2+dd)d+1). There exist two words σ,w∈T∗, a set of counters Q⊆used(T), and two configurations α,β such that:

The proof of the previous theorem is obtained by iterating the following lemma in order to obtain an increasing sequence of sets Q. Let T be a Petri net, let ρ be a configuration, let Q be a set of counters included in used(T) such that ρ|Q is T|Q-bottom, let s be the cardinal of the T|Q-component of ρ|Q, and let d{\tiny{def}}=|used(T)∖Q|.

We have proved the lemma. ∎

The rank i=0 is immediate. Assume the rank i−1 proved. We have:

A Petri net with states is a triple (S,T,E) where S is a non empty finite set of elements called states, T is a Petri net, and <span class="mjx-char MJXc-TeX-math-I" style="paddi