Pedestrian trajectory prediction is crucial for many important applications. This problem is a great challenge because of complicated interactions among pedestrians. Previous methods model only the pairwise interactions between pedestrians, which not only oversimplifies the interactions among pedestrians but also is computationally inefficient. In this paper, we propose a novel model StarNet to deal with these issues. StarNet has a star topology which includes a unique hub network and multiple host networks. The hub network takes observed trajectories of all pedestrians to produce a comprehensive description of the interpersonal interactions. Then the host networks, each of which corresponds to one pedestrian, consult the description and predict future trajectories. The star topology gives StarNet two advantages over conventional models. First, StarNet is able to consider the collective influence among all pedestrians in the hub network, making more accurate predictions. Second, StarNet is computationally efficient since the number of host network is linear to the number of pedestrians. Experiments on multiple public datasets demonstrate that StarNet outperforms multiple state-of-the-arts by a large margin in terms of both accuracy and efficiency. 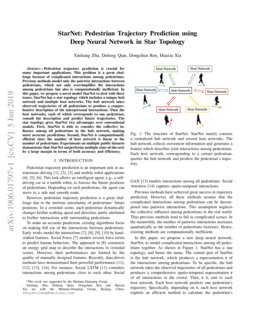 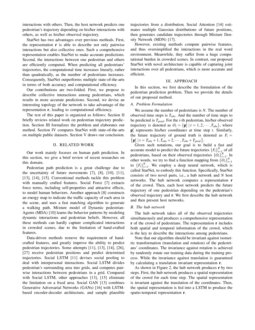 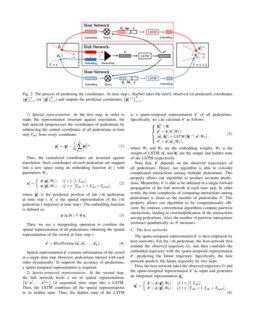 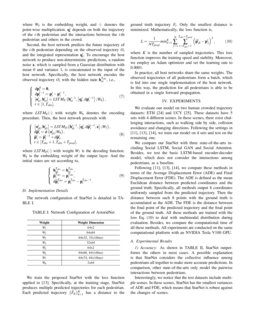 On planetary systems as ordered sequences

A planetary system consists of a host star and one or more planets, arra...
Emily Sandford, et al. ∙

The problem of varying dynamics of tracked objects, such as pedestrians,...
Stefan Becker, et al. ∙

Pedestrian trajectory prediction is an important task in autonomous driving [1, 2, 3] and mobile robot applications [4, 5, 6]. This task allows an intelligent agent, e.g., a self-driving car or a mobile robot, to foresee the future positions of pedestrians. Depending on such predictions, the agent can move in a safe and smooth route.

However, pedestrian trajectory prediction is a great challenge due to the intrinsic uncertainty of pedestrians’ future positions. In a crowded scene, each pedestrian dynamically changes his/her walking speed and direction, partly attributed to his/her interactions with surrounding pedestrians.

Previous methods have achieved great success in trajectory prediction. However, all these methods assume that the complicated interactions among pedestrians can be decomposed into pairwise interactions. This assumption neglects the collective influence among pedestrians in the real world. Thus previous methods tend to fail in complicated scenes. In the meanwhile, the number of pairwise interactions increases quadratically as the number of pedestrians increases. Hence, existing methods are computationally inefficient.

StarNet has two advantages over previous methods. First, the representation r is able to describe not only pairwise interactions but also collective ones. Such a comprehensive representation enables StarNet to make accurate predictions. Second, the interactions between one pedestrian and others are efficiently computed. When predicting all pedestrians’ trajectories, the computational time increases linearly, rather than quadratically, as the number of pedestrians increases. Consequently, StarNet outperforms multiple state-of-the-arts in terms of both accuracy and computational efficiency.

Our contributions are two-folded. First, we propose to describe collective interactions among pedestrians, which results in more accurate predictions. Second, we devise an interesting topology of the network to take advantage of the representation r, leading to computational efficiency.

Our work mainly focuses on human path prediction. In this section, we give a brief review of recent researches on this domain.

Pedestrian path prediction is a great challenge due to the uncertainty of future movements [7, 8, 10, 11, 13, 14, 15]. Conventional methods tackle this problem with manually crafted features. Social Force [7] extracts force terms, including self-properties and attractive effects, to model human behaviors. Another approach [8] constructs an energy map to indicate the traffic capacity of each area in the scene, and uses a fast matching algorithm to generate a walking path. Mixture model of Dynamic pedestrian-Agents (MDA) [10] learns the behavior patterns by modeling dynamic interactions and pedestrian beliefs. However, all these methods can hardly capture complicated interactions in crowded scenes, due to the limitation of hand-crafted features.

However, existing methods compute pairwise features, and thus oversimplified the interactions in the real word environment. Meanwhile, they suffer from a huge computational burden in crowded scenes. In contrast, our proposed StarNet with novel architecture is capable of capturing joint interactions over all pedestrians, which is more accurate and efficient.

In this section, we first describe the formulation of the pedestrian prediction problem. Then we provide the details of our proposed method.

Given such notations, our goal is to build a fast and accurate model to predict the future trajectories {Fi}Ni=1 of all pedestrians, based on their observed trajectories {Oi}Ni=1. In other words, we try to find a function mapping from {Oi}Ni=1 to {Fi}Ni=1. We employ a deep neural network, which is called StarNet, to embody this function. Specifically, StarNet consists of two novel parts, i.e., a hub network and N host networks. The hub network computes a representation r of the crowd. Then, each host network predicts the future trajectory of one pedestrian depending on the pedestrian’s observed trajectory and r. We first describe the hub network and then present host networks.

Thus, the centralized coordinates are invariant against translation. Such coordinates of each pedestrian are mapped into a new space using an embedding function ϕ(⋅) with parameters W1,

Spatial representation st contains information of the crowd at a single time step. However, pedestrians interact with each other dynamically. To improve the accuracy of predictions, a spatio-temporal representation is required.

where W2 and W4 are the embedding weights, W3 is the weight of LSTM. otc and htc are the output and hidden state of the LSTM respectively.

First, the host network takes the observed trajectory Oi and the spatio-temporal representation rt as input and generates an integrated representation qti,

, which is sampled from a Gaussian distribution with mean 0 and variance 1, is concatenated to the input of the host network. Specifically, the host network encodes the observed trajectory

where LSTME(⋅) with weight W6 denotes the encoding procedure. Then, the host network proceeds with

where LSTMD(⋅) with weight W7 is the decoding function. W8 is the embedding weight of the output layer. And the initial states are set according to,

The network configuration of StarNet is detailed in TABLE I.

We train the proposed StarNet with the loss function applied in

where K is the number of sampled trajectories. This loss function improves the training speed and stability. Moreover, we employ an Adam optimizer and set the learning rate to 0.0001.

In practice, all host networks share the same weights. The observed trajectories of all pedestrians form a batch, which is fed into one single implementation of the host network. In this way, the prediction for all pedestrians is able to be obtained in a single forward propagation.

We evaluate our model on two human crowded trajectory datasets: ETH [24] and UCY [25]. These datasets have 5 sets with 4 different scenes. In these scenes, there exist challenging interactions, such as walking side by side, collision avoidance and changing directions. Following the settings in [11, 13, 14], we train our model on 4 sets and test on the remaining one.

We compare our StarNet with three state-of-the-arts including Social LSTM, Social GAN and Social Attention. Besides, we test the basic LSTM-based encoder-decoder model, which does not consider the interactions among pedestrians, as a baseline.

Following [11, 13, 14], we compare these methods in terms of the Average Displacement Error (ADE) and Final Displacement Error (FDE). The ADE is defined as the mean Euclidean distance between predicted coordinates and the ground truth. Specifically, all methods output 8 coordinates uniformly sampled from the predicted trajectory. Then the distance between such 8 points with the ground truth is accumulated as the ADE. The FDE is the distance between the final point of the predicted trajectory and the final point of the ground truth. All these methods are trained with the loss Eq. (10) to deal with multimodal distribution during evaluation. Besides, we compare the computational time of all these methods. All experiments are conducted on the same computational platform with an NVIDIA Tesla V100 GPU.

As shown in TABLE II, StarNet outperforms the others in most cases. A possible explanation is that StarNet considers the collective influence among pedestrians all together to make more accurate predictions. In comparison, other state-of-the-arts only model the pairwise interactions between pedestrians.

Interestingly, we notice that the test datasets include multiple senses. In these scenes, StarNet has the smallest variances of ADE and FDE, which means that StarNet is robust against the changes of scenes.

In this paper, we propose StarNet, which has a star topology, for pedestrian trajectory prediction. StarNet learns complicated interpersonal interactions and predicts future trajectories with low time complexity. We apply a centralized hub network to model the spatio-temporal interactions among pedestrians. Then the host network takes full advantage of the spatio-temporal representation and predicts pedestrians’ trajectories. We demonstrate that StarNet outperforms state-of-the-arts in multiple experiments.