An (a,b,τ) streaming code is a packet-level erasure code that can recover under a strict delay constraint of τ time units, from either a burst of b erasures or else of a random erasures, occurring within a sliding window of time duration w. While rate-optimal constructions of such streaming codes are available for all parameters {a,b,τ,w} in the literature, they require in most instances, a quadratic, O(τ^2) field size. In this work, we make further progress towards field size reduction and present rate-optimal O(τ) field size streaming codes for two regimes: (i) gcd(b,τ+1-a)> a (ii) τ+1 > a+b and b a ∈{0,a-1}. 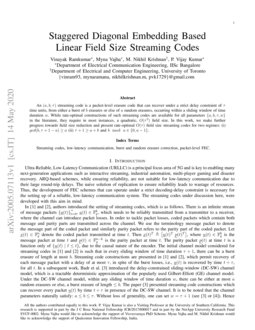 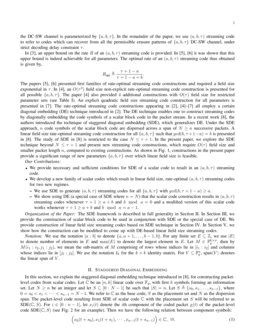 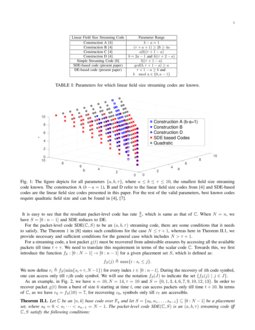 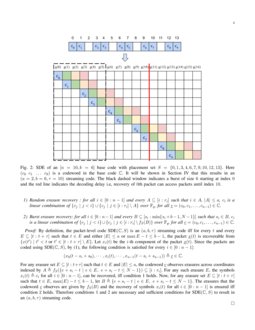 Online Versus Offline Rate in Streaming Codes for Variable-Size Messages

In this paper, we consider transmitting a sequence of messages (a stream...
Elad Domanovitz, et al. ∙

Ultra-Reliable, Low-Latency Communication (URLLC) is a principal focus area of 5G and is key to enabling many next-generation applications such as interactive streaming, industrial automation, multi-player gaming and disaster recovery. ARQ-based schemes, while ensuring reliability, are not suitable for low-latency communication due to their large round-trip delays. The naive solution of replication to ensure reliability leads to wastage of resources. Thus, the development of FEC schemes that can operate under a strict decoding-delay constraint is necessary for the setting up of a reliable, low-latency communication system. The streaming codes under discussion here, were developed with this aim in mind.

In [1] and [2], authors introduced the setting of streaming codes, which is as follows. There is an infinite stream of message packets {u––(t)}∞t=0, u––(t)∈Fkq, which needs to be reliably transmitted from a transmitter to a receiver, where the channel can introduce packet losses. In order to tackle packet losses, coded packets which contain both message and parity parts are transmitted across the channel. We use the terminology message packet to denote the message part of the coded packet and similarly parity packet refers to the parity part of the coded packet. Let x––(t)∈Fnq denote the coded packet transmitted at time t. Then x––(t)T≜[u––(t)T p–(t)T], where u––(t)∈Fkq is the message packet at time t and p–(t)∈Fn−kq is the parity packet at time t. The parity packet p–(t) at time t is a function only of {u––(ℓ) | ℓ≤t}, due to the causal nature of the encoder. The initial channel model considered for streaming codes in [1] and [2] is such that in every sliding window of time duration τ+1, there can be a burst erasure of length at most b. Streaming code constructions are presented in [1] and [2], which permit recovery of each message packet with a delay of at most τ, in spite of the burst losses, i.e., u––(t) is recovered by time t+τ, for all t. In a subsequent work, Badr et al. [3] introduced the delay-constrained sliding-window (DC-SW) channel model, which is a tractable deterministic approximation of the popularly used Gilbert-Elliott (GE) channel model. Under the DC-SW channel model, within any sliding window of time duration w, there can be either at most a random erasures or else, a burst erasure of length ≤b. The paper [3] presented streaming code constructions which can recover every packet u––(t) by time t+τ in presence of the DC-SW channel. It is to be noted that the channel parameters naturally satisfy: a≤b≤τ. Without loss of generality, one can set w=τ+1 (see [3] or [4]). Hence the DC-SW channel is parameterized by {a,b,τ}. In the remainder of the paper, we use (a,b,τ) streaming code to refer to codes which can recover from all the permissible erasure patterns of {a,b,τ} DC-SW channel, under strict decoding delay constraint τ.

Organization of the Paper

We use the notation [a:b] to denote {a,a+1,…,b−1,b}. For any finite set E⊆Z, we use |E| to denote number of elements in E and max(E) to denote the largest element in E. Let M∈Fk×nq, then by M(i1:i2,j1:j2), we mean the sub-matrix of M comprising of rows whose indices lie in [i1:i2] and columns whose indices lie in [j1:j2]. We use the notation Ik for the k×kidentity matrix. For V⊆Fnq, span⟨V⟩ denotes the linear span of V.

In this section, we explain the staggered diagonal embedding technique introduced in [8], for constructing packet-level codes from scalar codes. Let C be an [n,k] linear code over Fq, with first k symbols forming an information set. Let N≥n be an integer and let S⊆[0:N−1] be such that |S|=n. Let S≜{s0,s1,…,sn−1}, where 0=s0<s1<⋯<sn−1=N−1. We refer to C as the base code, S as the placement set and N as the dispersion span. The packet-level code resulting from SDE of scalar code C with the placement set S will be referred to as SDE(C,S). For i∈[0:n−1], let xi(t) denote the ith component of the coded packet x––(t) of the packet-level code SDE(C,S) (see Fig. 2 for an example). Then we have the following relation between component symbols:

It is easy to see that the resultant packet-level code has rate kn, which is same as that of C. When N=n, we have S=[0:n−1] and SDE reduces to DE.

For the packet-level code SDE(C,S) to be an (a,b,τ) streaming code, there are some conditions that it needs to satisfy. The Theorem 1 in [8] states such conditions for the case N≤τ+1, whereas here in Theorem II.1, we provide necessary and sufficient conditions for the general case which includes N>τ+1.

For a streaming code, a lost packet x––(t) must be recovered from admissible erasures by accessing all the available packets till time t+τ. We need to translate this requirement in terms of the scalar code C. Towards this, we first introduce the function fS:[0:N−1]→[0:n−1] for a given placement set S, which is defined as:

We now define ri≜fS(min{si+τ,N−1}) for every index i∈[0:n−1]. During the recovery of ith code symbol, one can access only till rith code symbol. We will use the notation fS(J) to indicate the set {fS(j) | j∈J}.

We now state a result which makes checking these p-c conditions easier in some cases. We will make use of this result repeatedly in the proof of Theorem IV.1.

Proof: Note that i≥p⟹ri≥rp and hence H(p) is a sub-matrix of H(i) as shown below. If ri=rp, the statement trivially holds. For ri>rp, H(i) has the following structure:

By equating rows where columns h(i)rp+1,⋯,h(i)ri have zeros we have:

In this section, we provide a construction of the scalar base code, which will be used in conjunction with SDE to obtain rate-optimal linear field size (a,b,τ) streaming codes.

Note that zij≠0, ∀{i,j} such that j∉[i+1:i+k−1](mod n). Otherwise, it would contradict the minimum distance of MDS code being equal to n−k+1.

For every set of positive integers {k,n} such that n≥k, a k×n zero-band MDS generator matrix can be explicitly constructed over Fq, if q≥n (for instance, see [4]).

A k×n matrix C is a super-regular matrix if every square sub-matrix of C is invertible.

It is a well-known result [9] that a k×n Cauchy matrix is super-regular and can always be explicitly constructed over Fq, with q≥k+n, for all positive integers k,n.

are 2×4 zero-band MDS generator matrix, 4×4 Cauchy matrix respectively. Both these matrices can be constructed over F8. In order to prove that the packet-level code constructed by SDE of C2,4,8 with placement set S2,6,10 is a rate-optimal streaming code, we only have to show that C2,4,8 along with S2,6,10 satisfy both random and burst erasure recovery conditions laid out in Section II. In this case, we have: r0=7,r1=7,ri=9,∀i∈[2:9].

The values of rja determines the punctured codes which we need to consider to prove the theorem.

We divide the proof into three parts based on the value of i.