In this paper we measured the stability of stochastic gradient method (SGM) for learning an approximated Fourier primal support vector machine. The stability of an algorithm is considered by measuring the generalization error in terms of the absolute difference between the test and the training error. Our problem is to learn an approximated kernel function using random Fourier features for a binary classification problem via online convex optimization settings. For a convex, Lipschitz continuous and smooth loss function, given reasonable number of iterations stochastic gradient method is stable. We showed that with a high probability SGM generalizes well for an approximated kernel under given assumptions.We empirically verified the theoretical findings for different parameters using several data sets. 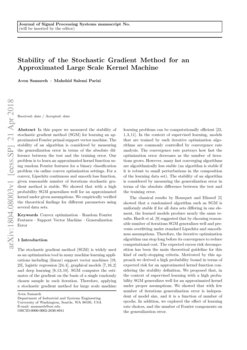 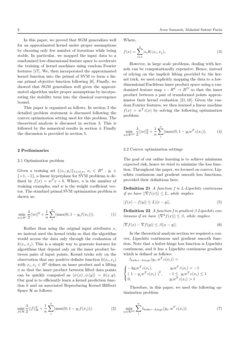 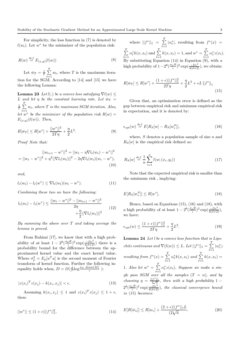 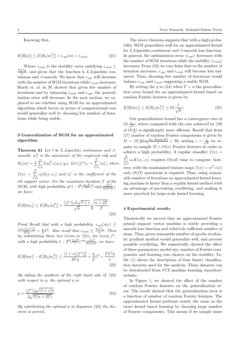 Consider the problem of minimizing functions that are Lipschitz and stro...
Nicholas J. A. Harvey, et al. ∙

. SGM computes the estimates of the gradient on the basis of a single randomly chosen sample in each iteration. Therefore, applying a stochastic gradient method for large scale machine learning problems can be computationally efficient

. In the context of supervised learning, models that are trained by such iterative optimization algorithms are commonly controlled by convergence rate analysis. The convergence rate portrays how fast the optimization error decreases as the number of iterations grows. However, many fast converging algorithms are algorithmically less stable (an algorithm is stable if it is robust to small perturbations in the composition of the learning data set). The stability of an algorithm is considered by measuring the generalization error in terms of the absolute difference between the test and the training error.

The classical results by Bousquet and Elisseef bousquet2002stability showed that a randomized algorithm such as SGM is uniformly stable if for all data sets differing in one element, the learned models produce nearly the same results. Hardt et al. hardt2015train

suggested that by choosing reasonable number of iterations SGM generalizes well and prevents overfitting under standard Lipschitz and smoothness assumptions. Therefore, the iterative optimization algorithm can stop long before its convergence to reduce computational cost. The expected excess risk decomposition has been the main theoretical guideline for this kind of early-stopping criteria. Motivated by this approach we derived a high probability bound in terms of expected risk for an approximated kernel function considering the stability definition. We proposed that, in the context of supervised learning with a high probability SGM generalizes well for an approximated kernel under proper assumptions. We showed that with few number of iterations generalization error is independent of model size, and it is a function of number of epochs. In addition, we explored the effect of learning rate choices, and the number of Fourier components on the generalization error.

In this paper, we proved that SGM generalizes well for an approximated kernel under proper assumptions by choosing only few number of iterations while being stable. In particular, we mapped the input data to a randomized low-dimensional feature space to accelerate the training of kernel machines using random Fourier features rahimi2007random . We, then incorporated the approximated kernel function into the primal of SVM to form a linear primal objective function following chapelle2007training . Finally, we showed that SGM generalizes well given the approximated algorithm under proper assumptions by incorporating the stability term into the classical convergence bound.

This paper is organized as follows. In section 2 the detailed problem statement is discussed following the convex optimization setting used for this problem. The theoretical analysis is discussed in section 3. This is followed by the numerical results in section 4. Finally the discussion is provided in section 5.

, a linear hyperplane for SVM problems is defined by

f(x)=wTx+b. Where, n is the number of training examples, and w is the weight coefficient vector. The standard primal SVM optimization problem is shown as:

Rather than using the original input attributes x, we instead used the kernel tricks so that the algorithm would access the data only through the evaluation of k(xi,xj). This is a simple way to generate features for algorithms that depend only on the inner product between pairs of input points. Kernel tricks rely on the observation that any positive definite function k(xi,xj) with xi,xj∈Rd defines an inner product and a lifting ϕ so that the inner product between lifted data points can be quickly computed as ⟨ϕ(x),ϕ(y)⟩=k(x,y). Our goal is to efficiently learn a kernel prediction function k and an associated Reproducing Kernel Hillbert Space H as follows:

However, in large scale problems, dealing with kernels can be computationally expensive. Hence, instead of relying on the implicit lifting provided by the kernel trick, we used explicitly mapping the data to a low-dimensional Euclidean inner product space using a randomized feature map z:Rd→RD so that the inner product between a pair of transformed points approximates their kernel evaluation yang2012nystrom ; rahimi2008random . Given the random Fourier features, we then learned a linear machine f(x)=wTz(x) by solving the following optimization problem:

The goal of our online learning is to achieve minimum expected risk, hence we tried to minimize the loss function. Throughout the paper, we focused on convex, Lipschitz continuous and gradient smooth loss functions, provided their definitions here.

A function f is L-Lipschitz continuous if we have ||∇f(x)||≤L, while implies

A function f is gradient β Lipschitz continuous if we have ||∇2f(x)||≤β, while implies

Therefore, in this paper, we used the following optimization problem:

For simplicity, the loss function in (7) is denoted by l(wt). Let w∗ be the minimizer of the population risk:

Let ¯wT=1TT∑t=1wt, where T is the maximum iteration for the SGM. According to lularge and nemirovski2009robust we have the following Lemma:

Let l(.) be a convex loss satisfying ∇l(w)≤L and let η be the constant learning rate. Let ¯wT=1TT∑t=1wt, where T is the maximum SGM iteration. Also, let w∗ be the minimizer of the population risk R(w)=E(x,y)(l(w)). Then,

Combining these two we have the following:

By summing the above over T and taking average the lemma is proved.

From Rahimi rahimi2007random , we know that with a high probability of at least 1−28(σpRϵ)2exp(−Dϵ24(d+2)) there is a probability bound for the difference between the approximated kernel value and the exact kernel value. Where σ2p=Ep[uTu]

is the second moment of Fourier transform of kernel function. Further the following inequality holds when,

where, S denotes a population sample of size n and RS[w] is the empirical risk defined as:

Note that the expected empirical risk is smaller than the minimum risk , implying:

Where ϵstab is the stability error satisfying ϵstab≤TL2ηn, and given that the function is L-Lipschitz continuous and β-smooth. We know that ϵopt will decrease with the number of SGM iterations while ϵstab increases. Hardt et. al. in hardt2015train showed that given few number of iterations and by balancing ϵstab and ϵopt, the generalization error will decrease. In the next section, we explored to see whether using SGM for an approximated algorithm which favors in terms of computational cost would generalize well by choosing few number of iterations while being stable.

3 Generalization of SGM for an approximated algorithm

By taking the gradient of the right hand side of (23) with respect to η, the optimal η is:

By substituting the optimal η in Equation (23) the theorem is proved.

The above theorem suggests that with a high probability SGM generalizes well for an approximated kernel for L-Lipschitz continuous and β-smooth loss function. In general, the optimization error (ϵopt) decreases with the number of SGM iterations while the stability (ϵstab) increases. From (22) we can claim that as the number of iteration increases, ϵopt and ϵstab will become less balanced. Thus, choosing few number of iterations would balance ϵopt and ϵstab suggesting a stable SGM.

By setting the η to (24) when T=n the generalization error bound for an approximated kernel based on random Fourier features is given by,

Our generalization bound has a convergence rate of O(1√n), where compared with the rate achieved by shalev2011pegasos of O(1n) is significantly more efficient. Recall that from rahimi2007random number of random Fourier components is given by D=Ω(dϵ2logσP diam(M)ϵ ). By setting ϵ=1√n we require to sample D=O(n)

Fourier features in order to achieve a high probability. A regular classifier

f(x)=N∑i=1αiK(xi,x), requires O(nd) time to compute; however, with the randomized feature maps f(x)=wTz(x) only O(D) operations is required. Thus, using reasonable number of iterations an approximated kernel learning machine is faster than a regular kernel method with an advantage of preventing overfitting, and making it more practical for large-scale kernel learning.

Theatrically we proved that an approximated Fourier primal support vector machine is stable providing a smooth loss function and relatively sufficient number of steps. Thus, given reasonable number of epochs stochastic gradient method would generalize well, and prevent possible overfitting. We numerically showed the effect of three parameters; model size, number of Fourier components and learning rate choices on the stability. Table (1) shows the description of four binary classification datasets used for the analysis. These datasets can be downloaded from UCI machine learning repository website.

In this paper we measured the stability of stochastic gradient method (SGM) for learning an approximated Fourier primal support vector machine. We demonstrated that a large-scale approximated online kernel machine using SGM is stable with a high probability. The empirical results showed that the generalization error is a function of number of epochs and independent of model size. We also showed the strong impact of learning rate choices and number of Fourier components. Moreover, in this paper we utilized SGM to solve an approximated primal SVM. Utilizing random Fourier features induced variance, which slowed down the convergence rate. One way to tackle this problem is using variance reduction methods such as stochastic variance reduced gradient (SVRG)