We prove sharp lower bounds for the smallest singular value of a partial Fourier matrix with arbitrary "off the grid" nodes (equivalently, a rectangular Vandermonde matrix with the nodes on the unit circle), in the case when some of the nodes are separated by less than the inverse bandwidth. The bound is polynomial in the reciprocal of the so-called "super-resolution factor", while the exponent is controlled by the maximal number of nodes which are clustered together. This generalizes previously known results for the extreme cases when all of the nodes either form a single cluster, or are completely separated. We briefly discuss possible implications for the theory and practice of super-resolution under sparsity constraints. 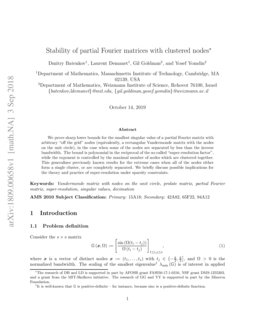 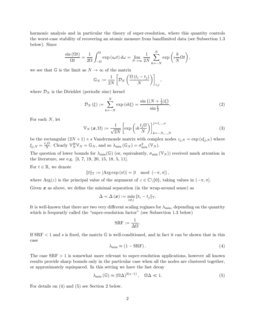 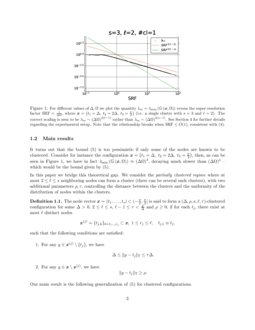 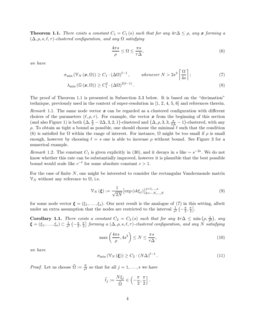 The spectral properties of Vandermonde matrices with clustered nodes

Conditioning of restricted Fourier matrices and super-resolution of MUSIC

How exponentially ill-conditioned are contiguous submatrices of the Fourier matrix?

We study the lower tail behavior of the least singular value of an n× n ...
Vishesh Jain, et al. ∙

is a vector of distinct nodes

is the normalized bandwidth. The scaling of the smallest eigenvalue

111It is well-known that G is positive-definite – for instance, because sinc is a positive-definite function. λmin(G) is of interest in applied harmonic analysis and in particular the theory of super-resolution, where this quantity controls the worst-case stability of recovering an atomic measure from bandlimited data (see sub:discussion below). Since

where DN is the Dirichlet (periodic sinc) kernel

For each N, let

Given x as above, we define the minimal separation (in the wrap-around sense) as

It is well-known that there are two very different scaling regimes for λmin, depending on the quantity which is frequently called the “super-resolution factor” (see sub:discussion below)

If SRF<1 and s is fixed, the matrix G is well-conditioned, and in fact it can be shown that in this case

The case SRF>1 is somewhat more relevant to super-resolution applications, however all known results provide sharp bounds only in the particular case when all the nodes are clustered together, or approximately equispaced. In this setting we have the fast decay

It turns out that the bound (5) is too pessimistic if only some of the nodes are known to be clustered. Consider for instance the configuration x=(t1=Δ,t2=2Δ,t3=π2), then, as can be seen in fig:sigma.min.first.simulation, we have in fact λmin(G(x,Ω))≈(ΔΩ)2, decaying much slower than (ΔΩ)4 – which would be the bound given by (5).

In this paper we bridge this theoretical gap. We consider the partially clustered regime where at most 2≤ℓ≤s neighboring nodes can form a cluster (there can be several such clusters), with two additional parameters ρ,τ, controlling the distance between the clusters and the uniformity of the distribution of nodes within the clusters.

such that the following conditions are satisfied:

Our main result is the following generalization of (5) for clustered configurations.

There exists a constant \Clmain−c−n=\Crmain−c−n(s) such that for any 4τΔ≤ρ, any x forming a (Δ,ρ,s,ℓ,τ)-clustered configuration, and any Ω satisfying

The proof of thm:main-theorem is presented in sub:theproof below. It is based on the “decimation” technique, previously used in the context of super-resolution in [1, 2, 4, 5, 6] and references therein.

The same node vector x can be regarded as a clustered configuration with different choices of the parameters (ℓ,ρ,τ). For example, the vector x from the beginning of this section (and also fig:sigma.min.first.simulation) is both (Δ,π2−2Δ,3,2,1)-clustered and (Δ,ρ,3,3,π2Δ−1)-clustered, with any ρ. To obtain as tight a bound as possible, one should choose the minimal ℓ such that the condition (6) is satisfied for Ω within the range of interest. For instance, Ω might be too small if ρ is small enough, however by choosing ℓ=s one is able to increase ρ without bound. See fig:breakdown for a numerical example.

The constant \Crmain−c−n is given explicitly in (30), and it decays in s like ∼s−2s. We do not know whether this rate can be substantially improved, however it is plausible that the best possible bound would scale like c−ℓ for some absolute constant c>1.

For the case of finite N, one might be interested to consider the rectangular Vandermonde matrix VN without any reference to Ω, i.e.

for some node vector ξ=(ξ1,…,ξs). Our next result is the analogue of (7) in this setting, albeit under an extra assumption that the nodes are restricted to the interval 1s2(−π2,π2].

There exists a constant \Clmain−vand=\Crmain−vand(s) such that for any 4τΔ≤min(ρ,1s2), any forming a (Δ,ρ,s,ℓ,τ)-clustered configuration, and any N satisfying

Returning back to thm:main-theorem, it turns out that the bound (8) is asymptotically optimal.

There exists an absolute constant η≪1 and a constant \Clupper=\Crupper(ℓ) such that for any 2≤ℓ≤s and any Δ satisfying Δ<π2(ℓ−1), there exists a (Δ,ρ′,s,ℓ,τ′)-clustered configuration xmin with s nodes and certain ρ′,τ′ depending only on s,ℓ, for which

Our main result has direct implications for the problem of super-resolution under sparsity constraints. For simplicity suppose that the nodes tj must belong to the grid of step size Δ. As demonstrated in [11, 18] and several other works, the minimax error rate for recovery of sparse point measures f(t)=∑sj=1ajδ(t−tj) from the bandlimited and inexact measurements {ˆf(ω)+e(ω),|ω|≤Ω,∥e∥2≤ε} is directly proportional to ε⋅minx,|x|=2s√λmin(G(x,Ω)) where x is any vector of length 2s. Moreover, it is established in those works that without any further constraints on the support of f, the bound (5) holds and it is the best possible.

It is fairly straightforward to extend the results of [18] and [11] to our setting: if the support of f is known to be partially clustered (as in def:partial-cluster), then the minimax error rate will satisfy

~f and the ℓ2 norm ∥⋅∥=∥⋅∥2, and it will be attained by the intractable sparse ℓ0-minimization, with the additional restriction that the solutions should exhibit the appropriate clustered sparsity pattern instead of the unconstrained sparsity.

A different but closely related setting was considered in the seminal paper [12], where the measure f was assumed to have infinite number of spikes on a grid of size Δ, with one spike per unit of time on average, but whose local complexity was constrained to have not more than R spikes per any interval of length R. R is called the “Rayleigh index”, being the maximal number of spikes which can be clustered together (a related notion of Rayleigh regularity was introduced in [23]). It was shown in [12] that the minimax recovery rate for such measures essentially scales like (13) where ℓ is replaced with R (the work [12] had a small gap in the exponents between the lower and upper bounds, which was later closed in [11] for the finite sparse case). Our partial cluster model can therefore be regarded as the finite-dimensional version of these “sparsely clumped” measures with finite Rayleigh index, showing the same scaling of the error – polynomial in SRF and exponential in the “local complexity” of the signal.

If the grid assumption is relaxed, then one might wish to measure the accuracy of recovery ∥~f−f∥ by comparing the locations of the recovered signal ~f with the true ones {tj}. In this case, there are additional considerations which are required to derive the minimax rate, and it is possible to do so under the partial clustering assumptions. See [2, 6] for details, where we prove (13) in this scenario, for uniform bound on the noise ∥e∥:=sup|ω|≤Ω|e(ω)|. The extreme case ℓ=s has been treated recently in [4, 5].

In the case of well-separated spikes (i.e. clusters of size ℓ=1), a recent line of work using ℓ1 minimization ([9, 8, 13, 10] and the great number of follow-up papers) has shown that the problem is stable and tractable.

Therefore, the partial clustering case is somewhat mid-way between the extremes ℓ=1 and ℓ=s, and while our results in this paper (and also in [6]) show that it is much more stable than in the unconstrained sparse case, it is an intriguing open question whether provably tractable solution algorithms exist.

Several candidate algorithms for sparse super-resolution are well-known – MUSIC, ESPRIT/matrix pencil, and variants; these have roots in parametric spectral estimation [27]. In recent years, the super-resolution properties of these algorithms are a subject of ongoing interest, see e.g. [14, 19, 25] and references therein. Smallest singular values of the partial Fourier matrices VN, for finite N, play a major role in these works, and therefore we hope that our results and techniques may be extended to analyze these algorithms as well.

Consider the well-separated case ΔΩ>1, and let VN be as defined in (3), i.e. a rectangular Vandermonde matrix with nodes zj,N=exp(ıξj,N) on the unit circle with ξj,N=tjΩN, so that mini≠j|ξi,N−ξj,N|:=ΔN>1N.

Several more or less equivalent bounds on σmin(VN) are available in this case, using various results from analysis and number theory such as Ingham and Hilbert inequalities, large sieve inequalities and Selberg’s majorants [17, 20, 24, 3, 21, 22, 15, 7].

The tightest bound was obtained by Moitra in [20], where he showed that if N−1>Δ−1N then

In our setting, we have ΔN=ΔΩN and so as N→∞ we obtain

If all the nodes tj are equispaced, say tj=t0+jΔ,j=1,…,s, then the matrix G is the so-called prolate matrix, whose spectral properties are known exactly [28, 26]. Indeed, we have in this case

The same scaling was shown using Szego’s theory of Toeplitz forms in [11] – see also sub:discussion. The authors showed that there exist C>0 and y∗>0 such that for ΩΔ<y∗

Essentially the same result was obtained in [18], where the authors considered partial discrete Fourier matrices

obtained from the un-normalized Discrete Fourier Transform matrix of size

N×N by taking the first M rows and an arbitrary set of S columns, with N≫M and M≫S. The authors showed that as M,N→∞ with the ratio NM fixed, we have the bound

which is attained for the configuration of consecutive S columns. In our equispaced setting, it is easy to see that the matrix √NVN for N large is precisely ΦM′,N′,s with M′=N and M′N′=ΩΔ. Therefore the above result reduces to

Here we introduce the uniform blowup of a node vector x=(t1,…,ts) by a positive parameter λ, and study the effect of such a blowup mapping on the minimal wrap-around distance between the mapped nodes.

Furthermore, the set Ic:=[Ω2s,Ωs]∖I is a union of at most s22⌈Ω4s⌉ intervals.

be the uniform probability measure on

be the random variable on

Now, consider the number a=y−tj. As λ varies between Ω2s+2(k−1)πδ and Ω2s+2kπδ, the number exp(ıλa) traverses the unit circle exactly once, and therefore the variable γ(λ) traverses the interval [0,απ] exactly twice. Consequently,

Fixing I as the complement of the above set, , we have that I is of total measure greater or equal to ξΩ2s, and for every λ∈I the estimate (16) holds. Clearly Ic is a union of at most s22⌈Ω4s⌉ intervals. ∎

By lem:blowup-lemma, the set Ic consists of K≤s22⌈Ω4s⌉ intervals, and by (19) the total length of Ic is at most Ω4s. Denote the lengths of those intervals by d1,…,dK. The distance between neighboring points in PN is ΩN, and therefore each interval contains at most djNΩ+1 points. Overall, the interval Ic contains at most

points from PN, and since the total number of points in [Ω2s,Ωs] is at least N2s, we have

Clearly, the matrix V(ξ,r) can be factorized as

and since for any ξj≠ξk

We shall bound σmin(VN(x,Ω)) defined as in (3) for sufficiently large N. For any subset R⊂{−N,…,N} let VN,R, be the submatrix of VN containing only the rows in R. By the Rayleigh characterization of singular values, it is immediately obvious that if {−N,…,N}=R1∪⋯∪RP is any partition of the rows of VN then

Let I be the set from lem:blowup-lemma for ξ=12. By prop:finite-n-blowup we have that for all N>2s3⌈Ω4s⌉, I will contain a rational multiple of Ω of the form λN=ΩNm for some m∈N.

Since λN≤Ωs it follows that ms≤N. Now consider the particular interleaving partition of the rows {−N,…,N} by blocks R−m,…,R−1,\allowbreakR0,R1,…,Rm of s rows each, separated by m−1 rows between them (some rows might be left out):

Now we use (26) to aggregate the bounds on σmin for each square matrix VN,Rn and obtain