We study quasi-Monte Carlo (QMC) methods for numerical integration of multivariate functions defined over the high-dimensional unit cube. Lattice rules and polynomial lattice rules, which are special classes of QMC methods, have been intensively studied and the so-called component-by-component (CBC) algorithm has been well-established to construct rules which achieve the almost optimal rate of convergence with good tractability properties for given smoothness and set of weights. Since the CBC algorithm constructs rules for given smoothness and weights, not much is known when such rules are used for function classes with different smoothness and/or weights. In this paper we prove that a lattice rule constructed by the CBC algorithm for the weighted Korobov space with given smoothness and weights achieves the almost optimal rate of convergence with good tractability properties for general classes of smoothness and weights. Such a stability result also can be shown for polynomial lattice rules in weighted Walsh spaces. We further give bounds on the weighted star discrepancy and discuss the tractability properties for these QMC rules. The results are comparable to those obtained for Halton, Sobol and Niederreiter sequences. 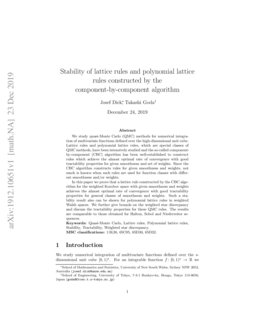 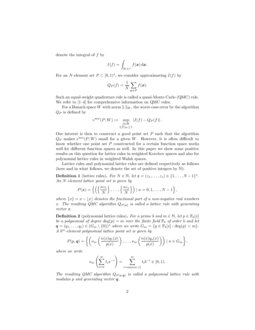 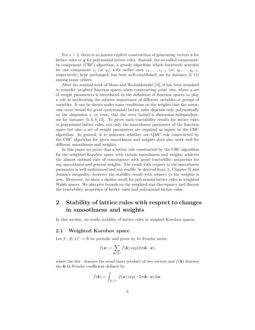 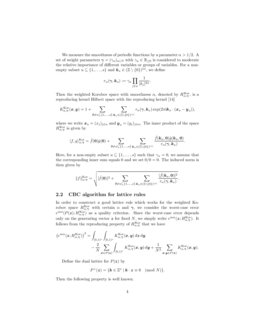 Weighted integration over a cube based on digital nets and sequences

We consider numerical integration in classes, for which we do not impose...
Vladimir Temlyakov, et al. ∙

We study numerical integration of multivariate functions defined over the s-dimensional unit cube [0,1)s. For an integrable function f:[0,1)s→R we denote the integral of f by

For an N-element set P⊂[0,1)s, we consider approximating I(f) by

Such an equal-weight quadrature rule is called a quasi-Monte Carlo (QMC) rule. We refer to [1, 2, 3, 4] for comprehensive information on QMC rules.

For a Banach space W with norm ∥⋅∥W, the worst-case error by the algorithm QP is defined by

Our interest is then to construct a good point set P such that the algorithm QP makes ewor(P;W) small for a given W. However, it is often difficult to know whether one point set P constructed for a certain function space works well for different function spaces as well. In this paper we show some positive results on this question for lattice rules in weighted Korobov spaces and also for polynomial lattice rules in weighted Walsh spaces.

Lattice rules and polynomial lattice rules are defined respectively as follows (here and in what follows, we denote the set of positive integers by N):

is called a lattice rule with generating vector

For s>2, there is no known explicit construction of generating vectors z for lattice rules or q for polynomial lattice rules. Instead, the so-called component-by-component (CBC) algorithm, a greedy algorithm which iteratively searches for one component zj (or qj) with earlier ones z1,…,zj−1 (or, q1,…,qj−1, respectively) kept unchanged, has been well-established, see for instance [5, 6, 7, 8, 9, 10, 11] among many others.

After the seminal work of Sloan and Woźniakowski [12], it has been standard to consider weighted function spaces when constructing point sets, where a set of weight parameters is introduced in the definition of function spaces to play a role in moderating the relative importance of different variables or groups of variables. It can be shown under some conditions on the weights that the worst-case error bound for good (polynomial) lattice rules depends only polynomially on the dimension s, or even, that the error bound is dimension-independent, see for instance [13, 8, 5, 6]. To prove such tractability results for lattice rules or polynomial lattice rules, not only the smoothness parameter of the function space but also a set of weight parameters are required as inputs in the CBC algorithm. In general, it is unknown whether one QMC rule constructed by the CBC algorithm for given smoothness and weights does also work well for different smoothness and weights.

In this paper we prove that a lattice rule constructed by the CBC algorithm for the weighted Korobov space with certain smoothness and weights achieves the almost optimal rate of convergence with good tractability properties for any smoothness and general weights. The result with respect to the smoothness parameter is well understood and can readily be derived from [1, Chapter 5] and Jensen’s inequality, however the stability result with respect to the weights is new. Moreover, we show a similar result for polynomial lattice rules in weighted Walsh spaces. We also give bounds on the weighted star discrepancy and discuss the tractability properties of lattice rules and polynomial lattice rules.

In this section, we study stability of lattice rules in weighed Korobov spaces.

Let f:[0,1)s→R be periodic and given by its Fourier series

We measure the smoothness of periodic functions by a parameter α>1/2. A set of weight parameters γ=(γu)u⊂N with γu∈R≥0 is considered to moderate the relative importance of different variables or groups of variables. For a non-empty subset u⊆{1,…,s} and ku∈(Z∖{0})|u|, we define

where we write xu=(xj)j∈u and yu=(yj)j∈u. The inner product of the space HKorα,γ is given by

Here, for a non-empty subset u⊆{1,…,s} such that γu=0, we assume that the corresponding inner sum equals 0 and we set 0/0=0. The induced norm is then given by

In order to construct a good lattice rule which works for the weighted Korobov space HKorα,γ with certain α and γ, we consider the worst-case error ewor(P(z);HKorα,γ) as a quality criterion. Since the worst-case error depends only on the generating vector z for fixed N, we simply write ewor(z;HKorα,γ). It follows from the reproducing property of HKorα,γ that we have

Define the dual lattice for P(z) by

Then the following property is well known.

Then the squared worst-case error is given by

There is a concise computable form of the criterion Pα,γ(z) when 2α is a natural number

where B2α is the Bernoulli polynomial of degree 2α.

Now the CBC algorithm for lattice rules proceeds as follows:

For special types of weights γ

, the necessary computational cost for the CBC algorithm can be made small by using the fast Fourier transform

for γ1,γ2,…∈R≥0, the set of non-negative real numbers, we only need O(sNlogN) arithmetic operations with O(N) memory. In the case of POD weights, i.e.,

As shown, for instance, in [4, Theorem 5.12], the worst-case error for lattice rules constructed by the CBC algorithm can be bounded as follows.

Let s,N∈N, α>1/2 and γ be given. The generating vector z constructed by Algorithm 1 satisfies

for any 1/(2α)<λ≤1, where ζ denotes the Riemann zeta function and φ denotes the Euler totient function defined by

For any 0<δ≤1, let us write γ1/δ=(γ1/δu)u⊂N. Then it follows from Jensen’s inequality that

Thus, the generating vector z constructed by Algorithm 1 based on the criterion Pα,γ(z) also works for weighted Korobov spaces with special types of smoothness and weights, i.e.,

for any 0<δ≤1. In the next subsection, we prove a more general stability result than what we obtain simply from Jensen’s inequality.

First we note that Pα,γ(z) is bounded below by another quality criterion, the Zaremba index or also called figure of merit ([1, Chapter 5], [2, Chapter 4])

This criterion turns out to be very useful in our context (it has for instance recently also been used in [15]).

We defer the proof of this theorem to the end of this section.

Theorem 1 implies that, if we can construct a lattice rule with small ρα,γ(z) value for given α and γ, the same lattice rule also does work for weighted Korobov spaces with different smoothness and weights. As mentioned in Remark 2, applying Jensen’s inequality leads to a kind of stability result, but it works only for higher smoothness α′=α/δ≥α and restrictive form of the weights.

Let z be the generating vector constructed by the CBC algorithm based on the criterion Pα,γ(z) for given α and γ. Applying the result from Proposition 1, we have

for any 1/(2α)<λ≤1. We can show under some conditions on the weights γ and γ′ that the worst-case error Pα′,γ′ depends only polynomially on the dimension s, or even, that the bound is independent of the dimension.

The result for the first item immediately follows from the bound (2.3). The second item can be proven by combining arguments used in [8, Theorem 4] and [18, Lemma 3]. ∎

One of the most important indications from the first item of Corollary 1 is that by choosing γ of product form such that the conditions given in item 1. of Corollary 1 are satisfied, then the CBC algorithm can construct a lattice rule in O(sNlogN) arithmetic operations with O(N) memory, which achieves the almost optimal rate of convergence in HKorα′,γ′ with good tractability properties even for general weights. As far as the authors know, such a constructive result for general weights has been not known in the literature.

In the proof of Theorem 1, we shall use the following elementary inequality. We refer to [3, Lemma 13.24] for the proof.

Recalling the definition of rα′, we have

Then it is straightforward to see that

Hence it holds for any non-empty subset u⊆{1,…,s} that

Moreover, by assuming γv≥γu whenever v⊂u, we obtain a lower bound

For the first term in the parenthesis, we have

Using these bounds, we obtain

Note that this bound on the inner sum on the expression of Pα,γ(z) also applies to the case |u|=1.

2.4 Bound on the weighted star discrepancy

Here we study tractability properties of the weighted star discrepancy for lattice rules constructed by the CBC algorithm based on the criterion Pα,γ.

For an N-element point set P⊂[0,1)s, the local discrepancy function is defined by

denotes the characteristic function of the interval

In what follows, we focus on lattice point sets and simply write D∗γ(z) instead of D∗γ(P(z)).

As shown in [19, Section 2], the weighted star discrepancy for a lattice point set with generating vector z is bounded above by

Applying the result from Proposition 1, we can prove the following tractability properties. For general weights γ′ we use

for any non-empty u⊆{1,…,s}. We assume that the sum ∑∞j=1γ′j<∞ in the case of product weights to ensure a dimension independent bound on the sum