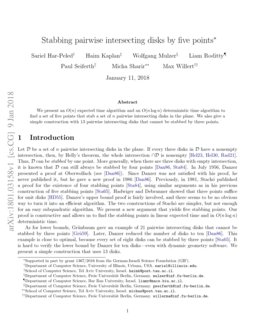 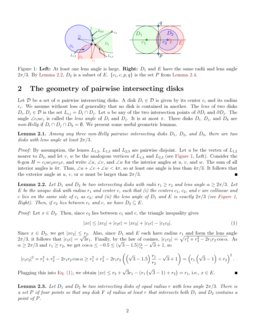 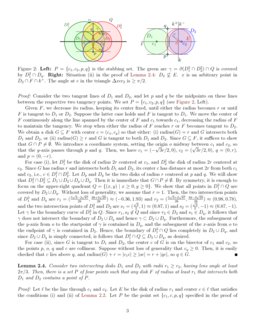 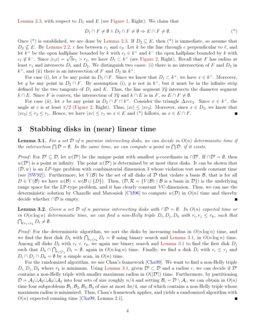 Let D be a set of n pairwise intersecting disks in the plane. If every three disks in D have a nonempty intersection, then, by Helly’s theorem, the whole intersection ∩D is nonempty [Hel23, Hel30, Rad21]. Thus, D can be stabbed by one point. More generally, when there are three disks with empty intersection, it is known that D can still always be stabbed by four points [Dan86, Sta84]. In July 1956, Danzer presented a proof at Oberwolfach (see [Dan86]). Since Danzer was not satisfied with his proof, he never published it, but he gave a new proof in 1986 [Dan86]. Previously, in 1981, Stachó published a proof for the existence of four stabbing points [Sta84], using similar arguments as in his previous construction of five stabbing points [Sta65]. Hadwiger and Debrunner showed that three points suffice for unit disks [HD55]. Danzer’s upper bound proof is fairly involved, and there seems to be no obvious way to turn it into an efficient algorithm. The two constructions of Stachó are simpler, but not enough for an easy subquadratic algorithm. We present a new argument that yields five stabbing points. Our proof is constructive and allows us to find the stabbing points in linear expected time and in O(nlogn) deterministic time.

As for lower bounds, Grünbaum gave an example of 21 pairwise intersecting disks that cannot be stabbed by three points [Grü59]. Later, Danzer reduced the number of disks to ten [Dan86]. This example is close to optimal, because every set of eight disks can be stabbed by three points [Sta65]. It is hard to verify the lower bound by Danzer for ten disks—even with dynamic geometry software. We present a simple construction that uses 13 disks.

2 The geometry of pairwise intersecting disks

Let D be a set of n pairwise intersecting disks. A disk Di∈D is given by its center ci and its radius ri. We assume without loss of generality that no disk is contained in another. The lens of two disks Di,Dj∈D is the set Li,j=Di∩Dj. Let u be any of the two intersection points of ∂Di and ∂Dj. The angle ∠ciucj is called the lens angle of Di and Dj. It is at most π. Three disks Di, Dj, and Dk are non-Helly if Di∩Dj∩Dk=∅. We present some useful geometric lemmas.

Among any three non-Helly pairwise intersecting disks D1, D2, and D3, there are two disks with lens angle at least 2π/3. ■

Let x∈D2. Then, since c2 lies between c1 and c, the triangle inequality gives

Let D1 and D2 be two intersecting disks of equal radius r with lens angle 2π/3. There is a set P of four points so that any disk F of radius at least r that intersects both D1 and D2 contains a point of P. ■

Consider the two tangent lines of D1 and D2, and let p and q be the midpoints on these lines between the respective two tangency points. We set P={c1,c2,p,q} (see Figure 2, Left).

Given F, we decrease its radius, keeping its center fixed, until either the radius becomes r or until F is tangent to D1 or D2. Suppose the latter case holds and F is tangent to D1. We move the center of F continuously along the line spanned by the center of F and c1 towards c1, decreasing the radius of F to maintain the tangency. We stop when either the radius of F reaches r or F becomes tangent to D2. We obtain a disk G⊆F with center c=(cx,cy) so that either: (i) radius(G)=r and G intersects both D1 and D2, or (ii) radius(G)≥r and G is tangent to both D1 and D2. Since G⊆F, it suffices to show that G∩P≠∅. We introduce a coordinate system, setting the origin o midway between c1 and c2, so that the y-axis passes through p and q. Then, we have c1=(−√3r/2,0), c2=(√3r/2,0), q=(0,r), and p=(0,−r).

Consider two intersecting disks D1 and D2 with radii r1≥r2, having lens angle at least 2π/3. Then, there is a set P of four points such that any disk F of radius at least r1 that intersects both D1 and D2 contains a point of P. ■

3 Stabbing disks in (near) linear time

For a set D of n pairwise intersecting disks, we can decide in O(n) deterministic time if the intersection ⋂D=∅. In the same time, we can compute a point in ⋂D, if it exists. ■

For D′⊆D, let w(D′) be the unique point with smallest y-coordinate in ∩D′. If ∩D′=∅, then w(D′) is a point at infinity. The point w(D′) is determined by at most three disks. It can be shown that (D,w) is an LP-type problem with combinatorial dimension 3 whose violation test needs constant time (see [SW92]). Furthermore, let V(B) be the set of all disks of D that violate a basis B, that is for all D∈V(B) we have w(B)<w(B∪{D}). Then, (D,R={V(B)∣B is a basis in D}) is the underlying range space for the LP-type problem, and it has clearly constant VC-dimension. Thus, we can use the deterministic solution by Chazelle and Matoušek [CM96] to compute w(D) in O(n) time and thereby decide whether ∩D is empty.

Given a set D of n pairwise intersecting disks with ∩D=∅. In O(n) expected time or in O(nlogn) deterministic time, we can find a non-Helly triple Di,Dj,Dk with ri,rj≤rk, such that ⋂ℓ:rℓ<rkDℓ≠∅. ■

For the randomized algorithm, we use Chan’s framework [Cha99]. We want to find a non-Helly triple Di,Dj,Dk where rk is minimum. Using Lemma 3, given D′⊂D and a radius r, we can decide if D′ contains a non-Helly triple with smaller maximum radius in O(|D′|) time. Furthermore, by partitioning D=A1˙∪A2˙∪A3˙∪A4 into four sets of size roughly n/4 and setting Bi=D∖Ai, we can obtain in O(n) time four subproblems B1,B2,B3,B4 of size at most 3n/4, one of which contains a non-Helly triple whose maximum radius is minimized. Thus, Chan’s framework applies, and yields a randomized algorithm with O(n) expected running time [Cha99, Lemma 2.1].

Given a set D of n pairwise intersecting disks in the plane, we can find, in O(n) expected time or in O(nlogn) deterministic time, a set S of five points such that every disk of D contains at least one point of S. ■

First, we decide if ∩D is empty, using Lemma 3. This needs linear time and returns a point in the common intersection, if it exists. Otherwise, by Helly’s theorem, there is a non-Helly triple (Di,Dj,Dk). We find such a triple with smallest maximum radius rk, using Lemma 3. For the disks Dℓ∈D with rℓ<rk, we can obtain in linear time a stabbing point s by using Helly’s theorem and Lemma 3. Next, by Lemma 2, there are two disks D′ and D′′ among Di, Dj and Dk whose lens angle is at least 2π/3. Let P be the set of four points, as described in the proof of Lemma 2, that stabs any disk of radius at least rk that intersects both D′ and D′′. Then S={s}∪P is a set of five points that stabs all disks of D.

The construction begins with an inner disk A, say of radius 1, and three larger disks D1, D2, D3 of equal size, so that A is tangent to all three disks, and each pair of the disks are tangent to each other. Denote the contact point of A and Di by ξi, for i=1,2,3.

We add six very large disks as follows. For i=1,2,3, we draw the two common outer tangents to A and Di, and denote by T−i and T+i the halfplanes that are bounded by these tangents and are openly disjoint from A. For concreteness, the labels T−i and T+i are such that the points of tangency between A and T−i, Di, and T+i, appear along ∂A in this counterclockwise order. One can show that the nine points of tangency between A and the other disks and halfplanes are all distinct (see Figure 3). We regard the six halfplanes T−i, T+i, for i=1,2,3, as disks; in the end, we can apply a suitable inversion to turn the disks and halfplanes into actual disks, if so desired.

Finally, we construct three additional disks A1, A2, A3. To construct Ai, we slightly expand A into a disk A′i of radius 1+ε1, while keeping it touching Di at ξi. We then roll A′i along Di, by a tiny angle ε2≪ε1 to obtain Ai.

This completes the construction, giving 13 disks. For sufficiently small ε1 and ε2, we can ensure the following properties for each Ai: (i) Ai intersects all other 12 disks, (ii) the nine intersection regions Ai∩Dj, Ai∩T−j, Ai∩T+j, for j=1,2,3, are pairwise disjoint. (iii) ξi∉Ai.

The 13 disks in the construction cannot be stabbed by three points. ■

Assume first that A∗ contains two stabbing points. As just argued, there are at most two of the remaining disks that are stabbed by these points. The following cases can then arise.

Assume then that A∗ contains only one stabbing point p, so at most one of the nine remaining disks is stabbed by p. Since p is the only point that stabs all three disks A1, A2, A3, it cannot be any of ξ1, ξ2, ξ3, so the other disk that it stabs (if there is such a disk) must be a halfplane. That is, p does not stab any of D1, D2, D3. Since D1, D2, D3 form a non-Helly triple, they require two points to stab them all. Moreover, since we only have two points at our disposal, one of them must be the point of tangency of two of these disks, say of D2 and D3. This point stabs only two of the six halfplanes (concretely, they are T−1 and T+1). But then D1, T+2, and T−3 form an unstabbed non-Helly triple.