The existing Zero-Shot learning (ZSL) methods may suffer from the vague class attributes that are highly overlapped for different classes. Unlike these methods that ignore the discrimination among classes, in this paper, we propose to classify unseen image by rectifying the semantic space guided by the visual space. First, we pre-train a Semantic Rectifying Network (SRN) to rectify semantic space with a semantic loss and a rectifying loss. Then, a Semantic Rectifying Generative Adversarial Network (SR-GAN) is built to generate plausible visual feature of unseen class from both semantic feature and rectified semantic feature. To guarantee the effectiveness of rectified semantic features and synthetic visual features, a pre-reconstruction and a post reconstruction networks are proposed, which keep the consistency between visual feature and semantic feature. Experimental results demonstrate that our approach significantly outperforms the state-of-the-arts on four benchmark datasets. 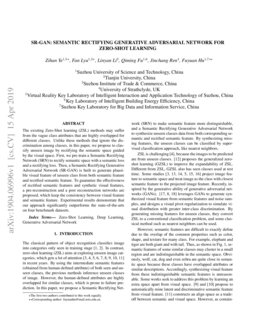 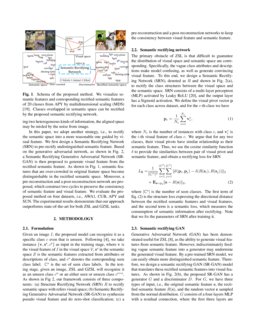 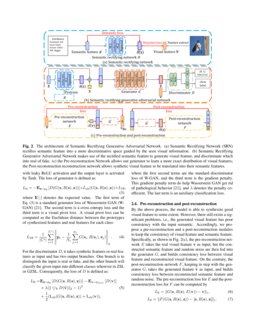 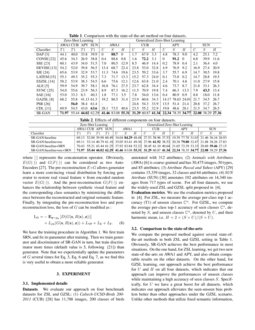 The classical pattern of object recognition classifies image into categories only seen in training stage [1, 2]. In contrast, zero-shot learning (ZSL) aims at exploring unseen image categories, which gets a lot of attention [3, 4, 5, 6, 7, 8, 9, 10, 11] in recent years. By using the intermediate semantic features (obtained from human-defined attribute) of both seen and unseen classes, the previous methods inference unseen classes of image. However, the human-defined attributes are highly overlapped for similar classes, which is prone to failure prediction. In this paper, we propose a Semantic Rectifying Network (SRN) to make semantic feature more distinguishable, and a Semantic Rectifying Generative Adversarial Network to synthesize unseen classes data from both corresponding semantic and rectified semantic feature. By synthesizing missing features, the unseen classes can be classified by supervised classification approach, like nearest neighbors.

ZSL is challenging [4], because the images to be predicted are from unseen classes. [12] proposes the generalized zero-shot learning (GZSL) to improve the expandability of ZSL. Different from ZSL, GZSL also has seen classes used at test time. Some studies [3, 13, 14, 5, 15, 16] project image feature to semantic space and treat image as the class with closest semantic feature to the projected image feature. Recently, inspired by the generative ability of generative adversarial networks (GANs),  [17, 8, 18] leverages GANs to generate synthesized visual feature from semantic features and noise samples, and designs a visual pivot regularization to simulate visual distribution with greater inter-class discrimination. By generating missing features for unseen classes, they convert ZSL to a conventional classification problem, and some classical method such as nearest neighbors can be used.

However, semantic features are difficult to exactly define due to the overlap of the common properties such as color, shape, and texture for many class. For example, elephant and tiger are both giant and with tail. Thus, as shown in Fig. 1, semantic features of some similar classes may cluster in a small region and are indistinguishable in the semantic space. Obviously, wolf, cat, dog and even zebra are quite close in semantic space because these classes have overlapped attributes or similar descriptions. Accordingly, synthesizing visual feature from these indistinguishable semantic features is unreasonable. Some works seek to address this problem by learning an extra space apart from visual space. [9] and [10] propose to automatically mine latent and discriminative semantic feature from visual feature. [11] constructs an align space as a trade-off between semantic and visual space. However, as containing two heterogeneous kinds of information, the aligned space may be misled by the noise from image.

In this paper, we adopt another strategy, i.e., to rectify the semantic space into a more reasonable one guided by visual feature. We first design a Semantic Rectifying Network (SRN) to pre-rectify undistinguished semantic feature. Based on the generative adversarial network, as shown in Fig. 2, a Semantic Rectifying Generative Adversarial Network (SR-GAN) is then proposed to generate visual feature from the rectified semantic feature. As shown in Fig. 1, semantic features that are over-crowded in original feature space become distinguishable in the rectified semantic space. Moreover, a pre-reconstruction and a post-reconstruction network are proposed, which construct two cycles to preserve the consistency of semantic feature and visual feature. We evaluate the proposed method on four datasets, i.e., AWA1, CUB, APY and SUN. The experimental results demonstrate that our approach outperforms state-of-the-art for both ZSL and GZSL tasks.

Given an image I, the proposed model can recognize it as a specific class c even that is unseen. Following [4], we take instance {v,ss,cs} as input in the training stage, where v is the visual feature of I in the visual space V, ss in the semantic space S

is the semantic features extracted from attributes or descriptions of class, and

cs denotes the corresponding seen class label. Cs is the set of seen class labels. In the testing stage, given an image, ZSL and GZSL will recognize it as an unseen class cu or an either seen or unseen class cs+u. As shown in Fig 2, our framework consists of three components: (a) Structure Rectifying Network (SRN) R to rectify semantic space with refers visual space; (b) Semantic Rectifying Generative Adversarial Network (SR-GAN) to synthesize pseudo visual feature and do zero-shot classification; (c) a pre-reconstruction and a post-reconstruction networks to keep the consistency between visual feature and semantic feature.

The primary obstacle of ZSL is that difficult to guarantee the distribution of visual space and semantic space are corresponding. Specifically, the vague class attributes and descriptions make model confusing, as well as generate convincing visual feature. To this end, we design a Semantic Rectifying Network (SRN), denoted as R and shown in Fig. 2

(a), to rectify the class structures between the visual space and the semantic space. SRN consists of a multi-layer perceptron (MLP) activated by Leaky ReLU

, and the output layer has a Sigmoid activation. We define the visual pivot vector

p for each class across dataset, and for the c-th class we have

where Nc is the number of instances with class c, and vci is the i-th visual feature of class c

. We argue that for any two classes, their visual pivots have similar relationship as their semantic feature. Thus, we use the cosine similarity function

δ to provide the similarities between pair of visual pivot and semantic feature, and obtain a rectifying loss for SRN

where |Cs| is the number of seen classes. The first term of Eq. (2.2) is the structure loss expressing the directional distance between the rectified semantic features and visual features, and the second term is a semantic loss, which measures the consumption of semantic information after rectifying. Note that we fix the parameters of SRN after training it.

sampled from the normal distribution.

consists of a four-layers MLP with a residual connection, where the first three layers are with leaky ReLU activation and the output layer is activated by Tanh. The loss of generator is defined as:

where E[⋅] denotes the expected value. The first term of Eq. (3) is a standard generator loss of Wasserstein GAN (W-GAN) [21]. The second term is a cross entropy loss and the third term is a visual pivot loss. A visual pivot loss can be computed as the Euclidean distance between the prototypes of synthesized features and real features for each class:

For the discriminator D, it takes synthetic features or real features as input and has two output branches. One branch is to distinguish the input is real or fake, and the other branch will classify the given input into different classes wherever in ZSL or GZSL. Consequently, the loss of D is defined as:

where the first second terms are the standard discriminator loss of W-GAN, and the third term is the gradient penalty. This gradient penalty term do help Wasserstein GAN get rid of pathological behavior [21], and λ denotes the penalty coefficient. The last term is an auxiliary classification loss.

We have the training procedure in Algorithm 1. We first train SRN, and fix its parameter after training. Then we train generator and discriminator of SR-GAN in turn, but train discriminator more times (default value is 5, following  [21]) than generator. Note that we experientially update the parameters of G several times for Eq. 3, Eq. 6 and Eq. 7, as we find this is very useful to obtain a more reliable generator.

. We use the evaluation metrics proposed in

, and their harmonic mean, i.e.

3.2 Comparison to the state-of-the-arts

We compare the proposed method against several state-of-the-art methods in both ZSL and GZSL setting in Table 1. Obviously, SR-GAN achieves the best performance in most situations. On the one hand, for ZSL learning, we get two new state-of-the-arts on AWA1 and APY, and also obtain comparable results on the other datasets. On the other hand, for GZSL learning, our approach achieve the best performance for U and H on all four datasets, which indicates that our approach can improve the performances of unseen classes while maintaining a high accuracy of seen classes S. Specifically, for U we have a great boost for all datasets, which indicates our approach alleviates the seen-unseen bias problem better than other approaches under the GZSL scenario. Unlike other methods that utilize fixed semantic information, SR-GAN make original semantic feature more discriminative, which is similar to CDL [11]. However, the aligned space in CDL is a compromise between semantic and visual space. In addition, CDL computes the feature similarities in semantic space, visual space and aligned space separately, which reduce the final performance. And our approach automatically explores the discrimination in rectifying space and also preserve the original semantic information to some extent.

We analyze the importance of every component of the proposed framework in Table 2. We denote two reconstruction networks, semantic rectifying network and the rest of our whole model as rec, SRN, and baseline, respectively. We evaluate three variants of our model by removing different components. The performance of the baseline is unremarkable for almost all datasets except S of AWA1. With the help of semantic rectifying network (rec), the performances slightly increases, e.g. for U in AWA1, SR-GAN:baseline+rec is better than baseline only (35.05%vs. 34.04%). It indicates that our reconstruction networks enhance the imagination of our model for unseen classes. With the SRN, the performances significantly increases: the performance of SR-GAN:baseline+SRN in all dataset for almost all accuracies is better than the baseline, which indicates that our SRN effectively rectifies semantic features to a more distinguishable space to generate more realized visual features.