Previous work approaches the SQL-to-text generation task using vanilla Seq2Seq models, which may not fully capture the inherent graph-structured information in SQL query. In this paper, we first introduce a strategy to represent the SQL query as a directed graph and then employ a graph-to-sequence model to encode the global structure information into node embeddings. This model can effectively learn the correlation between the SQL query pattern and its interpretation. Experimental results on the WikiSQL dataset and Stackoverflow dataset show that our model significantly outperforms the Seq2Seq and Tree2Seq baselines, achieving the state-of-the-art performance. 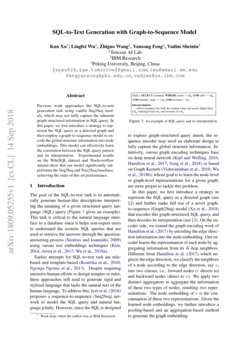 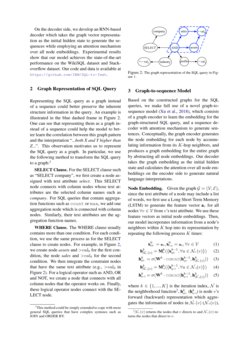 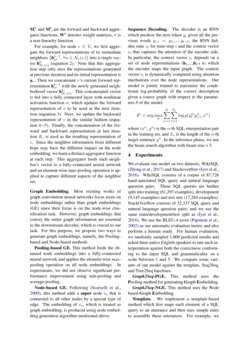 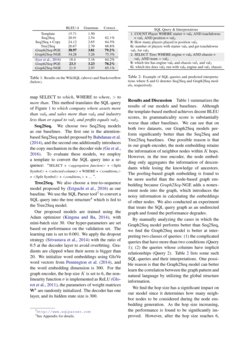 The goal of the SQL-to-text task is to automatically generate human-like descriptions interpreting the meaning of a given structured query language (SQL) query (Figure 1 gives an example). This task is critical to the natural language interface to a database since it helps non-expert users to understand the esoteric SQL queries that are used to retrieve the answers through the question-answering process Simitsis and Ioannidis (2009) using varous text embeddings techniques Kim (2014); Arora et al. (2017); Wu et al. (2018a).

. Despite requiring intensive human efforts to design temples or rules, these approaches still tend to generate rigid and stylized language that lacks the natural text of the human language. To address this, iyer2016summarizing proposes a sequence-to-sequence (Seq2Seq) network to model the SQL query and natural language jointly. However, since the SQL is designed to express graph-structured query intent, the sequence encoder may need an elaborate design to fully capture the global structure information. Intuitively, varous graph encoding techniques base on deep neural network

In this paper, we first introduce a strategy to represent the SQL query as a directed graph (see Section 2) and further make full use of a novel graph-to-sequence (Graph2Seq) model Xu et al. (2018) that encodes this graph-structured SQL query, and then decodes its interpretation (see Section 3). On the encoder side, we extend the graph encoding work of DBLP:conf/nips/HamiltonYL17 by encoding the edge direction information into the node embedding. Our encoder learns the representation of each node by aggregating information from its K

v, into two classes, i.e., forward nodes (v directs to) and backward nodes (direct to v). We apply two distinct aggregators to aggregate the information of these two types of nodes, resulting two representations. The node embedding of v is the concatenation of these two representations. Given the learned node embeddings, we further introduce a pooling-based and an aggregation-based method to generate the graph embedding.

On the decoder side, we develop an RNN-based decoder which takes the graph vector representation as the initial hidden state to generate the sequences while employing an attention mechanism over all node embeddings. Experimental results show that our model achieves the state-of-the-art performance on the WikiSQL dataset and Stackoverflow dataset. Our code and data is available at

WHERE Clause. The WHERE clause usually contains more than one condition. For each condition, we use the same process as for the SELECT clause to create nodes. For example, in Figure 2, we create node assets and >val0 for the first condition, the node sales and >val0 for the second condition. We then integrate the constraint nodes that have the same text attribute (e.g., >val0 in Figure 2). For a logical operator such as AND, OR and NOT, we create a node that connects with all column nodes that the operator works on. Finally, these logical operator nodes connect with the SELECT node.

Based on the constructed graphs for the SQL queries, we make full use of a novel graph-to-sequence model Xu et al. (2018), which consists of a graph encoder to learn the embedding for the graph-structured SQL query, and a sequence decoder with attention mechanism to generate sentences. Conceptually, the graph encoder generates the node embedding for each node by accumulating information from its K-hop neighbors, and produces a graph embedding for the entire graph by abstracting all node embeddings. Our decoder takes the graph embedding as the initial hidden state and calculates the attention over all node embeddings on the encoder side to generate natural language interpretations.

, since the text attribute of a node may include a list of words, we first use a Long Short Term Memory (LSTM) to generate the feature vector

av for all nodes ∀v∈V from v’s text attribute. We use these feature vectors as initial node embeddings. Then, our model incorporates information from a node’s neighbors within K hop into its representation by repeating the following process K times:

where k∈{1,...,K} is the iteration index, N is the neighborhood function222N⊢(v) returns the nodes that v directs to and N⊣(v) returns the nodes that direct to v., hkv⊢ (hkv⊣) is node v’s forward (backward) representation which aggregates the information of nodes in N⊢(v) (N⊣(v)), Mk⊢ and Mk⊣ are the forward and backward aggregator functions, Wk denotes weight matrices, σ is a non-linearity function.

. This concatenated vector is fed into a fully connected layer with nonlinear activation function

. Since the neighbor information from different hops may have the different impact on the node embedding, we learn a distinct aggregator function at each step. This aggregator feeds each neighbor’s vector to a fully-connected neural network and an element-wise max-pooling operation is applied to capture different aspects of the neighbor set.

Most existing works of graph convolution neural networks focus more on node embeddings rather than graph embeddings (GE) since their focus is on the node-wise classification task. However, graph embeddings that convey the entire graph information are essential to the downstream decoder, which is crucial to our task. For this purpose, we propose two ways to generate graph embeddings, namely, the Pooling-based and Node-based methods.

Pooling-based GE. This method feeds the obtained node embeddings into a fully-connected neural network and applies the element-wise max-pooling operation on all node embeddings. In experiments, we did not observe significant performance improvement using min-pooling and average-pooling.

Node-based GE. Following Scarselli et al. (2009), this method adds a super node vs that is connected to all other nodes by a special type of edge. The embedding of vs, which is treated as graph embedding, is produced using node embedding generation algorithm mentioned above.

is dynamically computed using attention mechanism over the node representations. Our model is jointly trained to maximize the conditional log-probability of the correct description given a source graph with respect to the parameters

θ of the model:

where (xn, yn) is the n-th SQL-interpretation pair in the training set, and Tn is the length of the n-th target sentence yn. In the inference phase, we use the beam search algorithm with beam size = 5.

as our automatic evaluation metric and also perform a human study. For human evaluation, we randomly sampled 1,000 predicted results and asked three native English speakers to rate each interpretation against both the correctness conforming to the input SQL and grammaticality on a scale between 1 and 5. We compare some variants of our model against the template, Seq2Seq, and Tree2Seq baselines.

Graph2Seq-NGE. This method uses the Node based Graph Embedding.

Template. We implement a template-based method which first maps each element of a SQL query to an utterance and then uses simple rules to assemble these utterances. For example, we map SELECT to which, WHERE to where, > to more than. This method translates the SQL query of Figure 1 to which company where assets more than val0 and sales more than val0 and industry less than or equal to val1 and profits equals val2.

Seq2Seq. We choose two Seq2Seq models as our baselines. The first one is the attention-based Seq2Seq model proposed by DBLP:journals/corr/BahdanauCB14, and the second one additionally introduces the copy mechanism in the decoder side (Gu et al., 2016). To evaluate these models, we employ a template to convert the SQL query into a sequence: “SELECT + <aggregation function> + <Split Symbol> + <selected column> + WHERE + <condition0> + <Split Symbol> + <condition1> + … ”.

Tree2Seq. We also choose a tree-to-sequence model proposed by Eriguchi et al. (2016) as our baseline. We use the SQL Parser tool333http://www.sqlparser.com to convert a SQL query into the tree structure444See Appendix for details. which is fed to the Tree2Seq model.

Our proposed models are trained using the Adam optimizer Kingma and Ba (2014), with mini-batch size 30. Our hyper-parameters are set based on performance on the validation set. The learning rate is set to 0.001. We apply the dropout strategy Srivastava et al. (2014) with the ratio of 0.5 at the decoder layer to avoid overfitting. Gradients are clipped when their norm is bigger than 20. We initialize word embeddings using GloVe word vectors from pennington2014glove, and the word embedding dimension is 300. For the graph encoder, the hop size K is set to 6, the non-linearity function σ

is implemented as ReLU

Glorot et al. (2011), the parameters of weight matrices Wk are randomly initialized. The decoder has one layer, and its hidden state size is 300.

Table 1 summarizes the results of our models and baselines. Although the template-based method achieves decent BLEU scores, its grammaticality score is substantially worse than other baselines. We can see that on both two datasets, our Graph2Seq models perform significantly better than the Seq2Seq and Tree2Seq baselines. One possible reason is that in our graph encoder, the node embedding retains the information of neighbor nodes within K hops. However, in the tree encoder, the node embedding only aggregates the information of descendants while losing the knowledge of ancestors. The pooling-based graph embedding is found to be more useful than the node-based graph embedding because Graph2Seq-NGE adds a nonexistent node into the graph, which introduces the noisy information in calculating the embeddings of other nodes. We also conducted an experiment that treats the SQL query graph as an undirected graph and found the performance degrades.

By manually analyzing the cases in which the Graph2Seq model performs better than Seq2Seq, we find the Graph2Seq model is better at interpreting two classes of queries: (1) the complicated queries that have more than two conditions (Query 1); (2) the queries whose columns have implicit relationships (Query 2). Table 2 lists some such SQL queries and their interpretations. One possible reason is that the Graph2Seq model can better learn the correlation between the graph pattern and natural language by utilizing the global structure information.

We find the hop size has a significant impact on our model since it determines how many neighbor nodes to be considered during the node embedding generation. As the hop size increasing, the performance is found to be significantly improved. However, after the hop size reaches 6, increasing the hop size can not boost the performance on WikiSQL anymore. By analyzing the most complicated queries (around 6.2%) in WikiSQL, we find there are average six hops between a node and its most distant neighbor. This result indicates that the selected hop size should guarantee each node can receive the information from others nodes in the graph.

Previous work approaches the SQL-to-text task using an Seq2Seq model which does not fully capture the global structure information of the SQL query. To address this, we proposed a Graph2Seq model which includes a graph encoder, an attention based sequence decoder. Experimental results show that our model significantly outperforms the Seq2Seq and Tree2Seq models on the WikiSQL and Stackoverflow datasets.

We apply the SQL Parser tool555http://www.sqlparser.com to convert an SQL query to a tree whose structure is illustrated in Figure 3. More specifically, the root has two child nodes, namely Select List and Where Clause. The child nodes of Select List represent the selected columns in the SQL query. The Where Clause has the logical operators occurred in the SQL query as its children. The children of a logical operator node are the conditions on which this operator works.