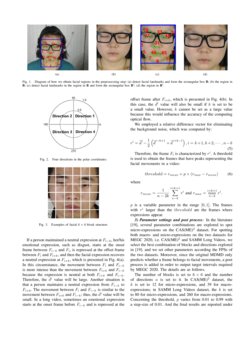 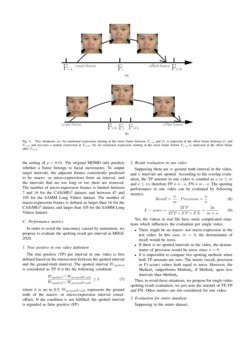 Facial expressions are important non-verbal cues that convey emotions. Macro-expressions are the common facial expressions in our daily life, which are the types we usually know. There is a special type of expressions called “micro-expressions” that were first found by Haggard and Isaacs [5]. Micro-expressions (MEs) are involuntary facial movements occurring spontaneously when a person attempts to conceal the experiencing emotion in a high-stakes environment. The duration of MEs is very short. The general duration is less than 500 milliseconds (ms) [21, 10]. The close connection between MEs and deception makes the relevant research have great significance on many applications such as medical care [3] and law enforcement [4].

Spotting expressions is to find the moment when expressions occurs in the whole video sequences. In the Second Micro-Expression Spotting Challenge (MEGC 2019)

[14], methods for spotting ME intervals in long videos were explored [7]. In the past decades, several explorations for spotting MEs have been done [12, 20, 18, 17, 16, 24, 9, 19, 8, 11]. However, MEs are often accompanied by macro-expressions, and both of the two types of expressions are valuable for affect analysis. Therefore, developing methods to spot both macro- and micro-expressions is the main theme of MEGC 2020.

In this paper, we provide the baseline method and results for the Third Facial Micro-Expression Grand Challenge (MEGC 2020), spotting macro- and micro-expression intervals in long video sequences from the dataset CAS(ME)2 and SAMM Long Videos. The main method is the Main Directional Maximal Difference Analysis (MDMD) [19]. The original MDMD only predicts whether a frame belongs to facial movements. To obtain target intervals, the adjacent frames consistently predicted to be macro- or micro-expressions form an interval, and the intervals that are too long or too short are removed. Parameters are adjusted to specific expression types for specific datasets. The performance metric, F1-scores, is used for the evaluation on the two long video datasets.

This section describes the benchmark datasets, the baseline method, and the performance metrics.

database, there are 22 subjects and 98 long videos. The facial movements are classified as macro- and micro-expressions. The video samples may contain multiple macro or micro facial expressions. The onset, apex, offset index for these expressions are given in the excel file. In addition, the eye blinks are labeled with onset and offset time.

SAMM Long Videos [22] : The original SAMM dataset [2] contains 159 micro-expressions, which was used for the past two micro-expressions recognition challenge [23, 14]. Recently, the authors [22] released the SAMM Long Videos dataset, which consists of 147 long videos. There are 343 macro-movements and 159 micro-movements in the long videos. The index of onset, apex and offset frames of micro- and macro-movements are outlined in the ground truth excel file.

More detailed and comparative information of these two datasets is presented in Table I.

Expression spotting focuses on facial regions. So we preprocess every video sample by cropping and resizing facial regions in all frames. For each video, we locate the rectangular box that exactly bounds facial regions in the first frame, and then all the frames of the video are cropped and resized according to the box located in the first frame. We locate the bounding box according to facial landmarks detected by the corresponding function in the ”Dlib” toolkit [6], as we found that applying a face detecting algorithm directly cannot behavior very well. The preprocess details are as follows.

Firstly, we use the landmark detecting function in the ”Dlib” toolkit to obtain 68 facial landmarks on the face in the first frame of the video, as illustrated in the Fig. 1 – the first frame of s23_0102 in CAS(ME)2. The landmarks are marked as L1,L2,⋯,L68 in the sequence of the list returned by the landmark detecting function in ”Dlib”, and the corresponding coordinates are marked as (x1,y1),(x2,y2),⋯,(x68,y68). The coordinate system is consistent with the one in the OpenCV toolkit [1], i.e. x-axis means the horizontal direction from left to right, and y-axis means the vertical direction from top to bottom. The green dots in Fig. 1 are the landmarks, and some of the serial numbers are marked by the red text.

Secondly, in order to form a rectangular box that bounds the facial region exactly, the leftmost, rightmost, topmost and bottommost landmarks are marked as Ll,Lr,Lt,Lb with coordinates (xl,yl),(xr,yr),(xt,yt),(xb,yb), respectively. Rather than forming the box directly according to Ll,Lr,Lt,Lb, we form two points: A(xl,yt−(y37−y19)),B(xr,yb) to obtain the box B with A as the upper left corner and B as the lower right corner. The coordinate yt−(y37−y19) means that the upper edge of the box is moved up a relative distance to maintain more regions around eyebrows. In Fig. 1, the box B is illustrated by the blue rectangular.

Thirdly, as shown by Fig. 1, which is the region in B, we found there are too many regions in the bottom for several subjects in the two datasets because of the inaccuracy of landmark detecting, and so, we detect landmarks again on the region of the first frame in B for cropping faces more precisely. It is shown in the Fig. 1. Then, we get a new bottommost landmark L′b(x′b,y′b). B is updated to B′(xr,ymin), where ymin is the smaller one of yb and y′b. Then a new rectangular box B′ is formed with A as the upper left corner and B′ as the lower right corner. In Fig. 1, the box B′ is illustrated by the blue rectangular. And the region of the first frame in B′ is illustrated in Fig. 1, in which we can find that the facial region is located better.

Finally, after obtaining the box B′, we crop all the frames of the video in the rectangular box B′, and thus get the facial regions. The cropped regions are then resized to the size of 227×227.

The method of Main Directional Maximal Difference Analysis (MDMD) is proposed in the literature [19]. The main idea is that: when an expression happens, the face will experience a process of producing an expression and returning to a neutral face. The main movement directions will be opposite in the process. By analyzing it, expressions can be spotted. Here we review the MDMD method.

Given a video with n frames, the current frame is denoted as Fi. Fi−k is the k-th frame before the Fi, and Fi+k is the k-th frame after the Fi. The robust local optical flow (RLOF) [15] between the Fi−k frame (Head Frame) and the Fi frame (Current Frame) is computed. We denote the optical flow by (uHC,vHC). For convenience, (uHC,vHC) means the displacement of any point. Similarly, the optical flow between the Fi−k frame (Head Frame) and the Fi+k frame (Tail Frame) is denoted by (uHT,vHT). Then, (uHC,vHC) and (uHT,vHT) are converted from Euclidean coordinates to polar coordinates (ρHC,θHC) and (ρHT,θHT), where ρ and θ represent, respectively, the magnitude and direction.

Based on the directions {θHC}

, all the optical flow vectors

We employed a relative difference vector for eliminating the background noise, which was computed by:

Therefore, the frame Fi is characterized by ri. A threshold is used to obtain the frames that have peaks representing the facial movements in a video:

p is a variable parameter in the range [0,1]. The frames with ri larger than the threshold are the frames where expressions appear.

In the literature [19], several parameter combinations are explored to spot micro-expressions on the CAS(ME)2 dataset. For spotting both macro- and micro-expressions on the two datasets for MEGC 2020, i.e. CAS(ME)2 and SAMM Long Videos, we select the best combination of blocks and directions explored in [19]. and we set other parameters according the FPSs of the two datasets. Moreover, since the original MDMD only predicts whether a frame belongs to facial movements, a post process is added in order to output target intervals required by MEGC 2020. The details are as follows.

In order to avoid the inaccuracy caused by annotation, we propose to evaluate the spotting result per interval in MEGC 2020.

1. True positive in one video definition

where k is set to 0.5, WgroundTruth represents the ground truth of the macro- or micro-expression interval (onset-offset). If the condition is not fulfilled, the spotted interval is regarded as false positive (FP).

2. Result evaluation in one video

Supposing there are m ground truth interval in the video, and n intervals are spotted. According to the overlap evaluation, the TP amount in one video is counted as a (a≤m and a≤n), therefore FP = n−a, FN = m−a. The spotting performance in one video can be evaluated by following metrics:

Yet, the videos in real life have some complicated situations which influences the evaluation per single video:

Thus, to avoid these situations, we propose for single video spotting result evaluation, we just note the amount of TP, FP and FN. Other metrics are not considered for one video.

Supposing in the entire dataset,

The dataset could be considered as one long video. The results are firstly evaluated for the MaE spotting and ME spotting separately. Then the overall result for macro- and micro spotting is evaluated. The recall and precision for entire dataset can be calculated by following formulas:

Then, the values of F1-score for all these three evaluations are obtained based on:

The champion of the challenge will be the best score for overall results in spotting micro- and macro-expressions.

For the parameter p, we have studied the evaluation results by varying p from 0.01 to 0.99 with step-size of 0.01, and the 20 results from 0.01 to 0.20 are shown in Table II. In Table II, we list the information of TPs and F1-scores for macro- and micro-expression spotting respectively. We observe that, for both types of expressions in the two datasets, the number of TP is decreasing with the increase of p. Regarding the F1-score, it also shows a decreasing trend in SAMM Long Videos. Yet, in CAS(ME)2, the F1-score increases at first and then begins to decrease. The initial increase of the F1-score in CAS(ME)2 is mainly because the number of the totally predicted intervals (n) become smaller with the increase of p, making the precision (a/n) increase.

This paper addresses the challenge in spotting macro- and micro-expressions in long video sequence, and provides the baseline method and results for the Third Facial Micro-Expression Spotting Challenge (MEGC 2020). The Main Directional Maximal Difference Analysis (MDMD) [19] is employed as the baseline method, and the parameter settings are adjusted to CAS(ME)2 and SAMM Long Videos for the spotting challenge in MEGC 2020. Slight modification are done to predict more reasonable intervals on the post-processing of results. Experiments were done and the predicted results were evaluated using the metrics in MEGC 2020. The results have shown that the MDMD method can produce reasonable performance, but there are still a huge challenge to reduce the amount of FPs.