In this note we study the benefits of splitting variables variables for reducing the variance of linear functions of the regression coefficient estimate. We show that splitting combined with shrinkage can result in estimators with smaller mean squared error compared to popular shrinkage estimators such as Lasso, ridge regression and garrote. 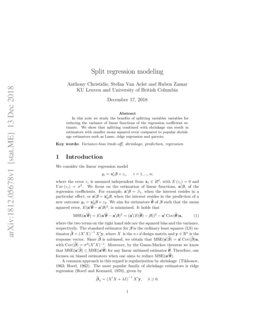 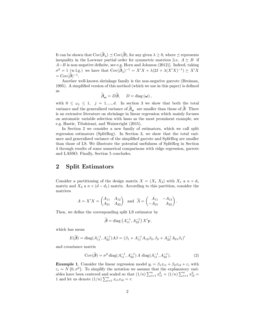 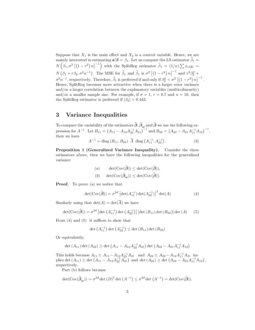 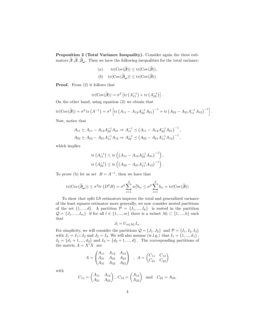 M-estimators of scatter with eigenvalue shrinkage

The estimation of the mean matrix of the multivariate normal distributio...
Ryota Yuasa, et al. ∙

We consider the linear regression model

where the error εi is assumed independent from xi∈Rd, with E(εi)=0 and Var(εi)=σ2.  We focus on the estimation of linear functions, a′β, of the regression coefficients. For example, a′β=β1, when the interest resides in a particular effect, or a′β=x′0β, when the interest resides in the prediction of a new outcome y0= x′0β+ε0. We aim for estimators ˆθ of β such that the mean squared error, E(a′ˆθ−a′β)2, is minimized. It holds that

where the two terms on the right hand side are the squared bias and the variance, respectively. The standard estimator for β

is the response vector. Since

for any linear unbiased estimator

ˆθ. Therefore, one focuses on biased estimators when one aims to reduce MSE(a′ˆθ).

A common approach in this regard is regularization by shrinkage  (Tikhonov, 1963; Hoerl, 1962). The most popular family of shrinkage estimators is ridge regression (Hoerl and Kennard, 1970), given by

Another well-known shrinkage family is the non-negative garrote (Breiman, 1995). A simplified version of this method (which we use in this paper) is defined as

with 0≤ωj≤1,  j=1,...,d.  In section 3 we show that both the total variance and the generalized variance of ˆβω  are smaller than those of ˆβ. There is an extensive literature on shrinkage in linear regression which mainly focuses on automatic variable selection with lasso as the most prominent example, see e.g. Hastie, Tibshirani, and Wainwright (2015).

In Section 2 we consider a new family of estimators, which we call split regression estimators (SplitReg). In Section 3, we show that the total variance and generalized variance of the simplified garrote and SplitReg are smaller than those of LS. We illustrate the potential usefulness of SplitReg in Section 4 through results of some numerical comparisons with ridge regression, garrote and LASSO. Finally, Section 5 concludes.

Consider a partitioning of the design matrix X=(X1 X2) with X1 a n×d1 matrix and X2 a n×(d−d1) matrix. According to this partition, consider the matrices

Then, we define the corresponding split LS estimator by

Proposition 1 (Generalized Variance Inequality). Consider the three estimators above, then we have the following inequalities for the generalized variance

Proof.  To prove (a) we notice that

Part (b) follows because

Proposition 2 (Total Variance Inequality). Consider again the three estimators ˆβ ,˜β, ˆβω. Then we have the following inequalities for the total variance:

On the other hand, using equation (3) we obtain that

Proof. To simplify the notation, assume that σ2=1,. We have

Therefore, to prove (a) write

From Theorem 2 and 3 it follows that

For garrote prediction with weights ω we obtain that

For ridge regression prediction with penalty λ we have

To make SplitReg more flexible, similarly as for the garrote, we add a shrinkage parameter w=(w1,w2) to the split coefficient estimates ˜β. Moreover, since splitting is not always better than joint estimation as illustrated in Example 1, we make SplitReg adaptive by allowing it to choose whether to use the joint LS estimates or to use the split LS estimates. The decision to split or not to split is made by comparing the performance of the best shrunken SplitReg estimator ˜βw to the best shrunken joint LS estimator, i.e. the simplified garrote estimator ˆβω. The PMSE of the shrunken SplitReg estimator is given by

In Figure 1 we compare the minimal attainable PMSE by the LS, ridge regression, simplified garrote, lasso and adaptive SplitReg methods as a function of β2 when β1=1, n=10 and ρ=0.5. The error variance σ2 was chosen such that the signal to noise ratio equals 1 or 3 and the correlation between the predictors in the training sample was given by r=0.1,0.5 or 0.9. From these plots we can see that all methods can improve on LS as expected. Moreover, the signal to noise ratio has little effect on the order of performance. On the other hand, changing the correlation r does affect the order of performance. When r increases, the differences between the methods become larger as well and especially the simplified garrote is affected by the increasing correlation in the training data. However, the adaptive SplitReg consistently yields the best performance.

In this note we have shown that next to regularization also split regressions can be used to reduce the variability of LS. Both the generalized variance and the total variance of linear functions of the SplitReg coefficients are smaller than those based on LS coefficients. This smaller variability can result in a lower MSE as illustrated in a simple setting by comparing PMSE of an adaptive SplitReg method with ridge regression, simplified garrote and lasso. We expect that the benefits are higher in high-dimensional regression models where spurious correlations frequently occur. However, determining the optimal splits is a difficult task in practice. An exhaustive search over all possible splits is not feasible, so approximate methods need to be developed. This is a topic of ongoing research. For example, minimizing a penalized loss function is a possibility that yields promising results, see