As an emerging technology, large intelligent surfaces (LIS) have gain much interest recently. Earlier proposed LISs are in two-dimensional (2D) forms and act as electromagnetic planar surfaces transmitting and receiving radiating signals. In this letter, we extend LIS to be three-dimensional (3D) and deployed as a spherical surface. Compare to a planar LIS, a spherical LIS have many advantages in terms of better coverage, higher averaged received signal strength (RSS), simpler positioning of terminals, and flexible implementations as passive reflector. 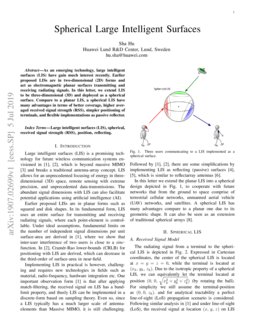 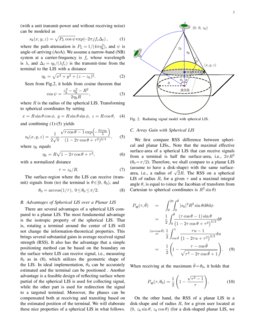 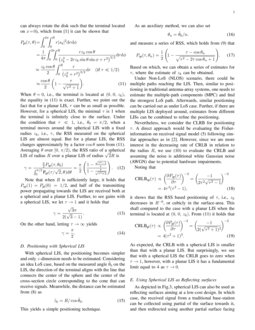 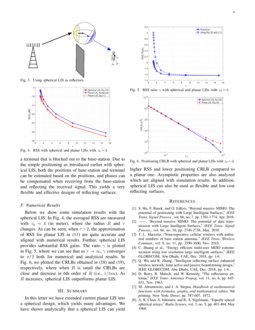 Large intelligent surfaces (LIS) is a promising technology for future wireless communication systems envisioned in [1, 2], which is beyond massive MIMO [3]

Earlier proposed LISs are in planar forms such as squared and disk shapes. In its fundamental form, LIS uses an entire surface for transmitting and receiving radiating signals, where each point-element is controllable. Under ideal assumptions, fundamental limits on the number of independent signal dimensions per unit surface-area are derived in [1], where we show that inter-user interference of two users is close to a sinc-function. In [2], Cramér-Rao lower-bounds (CRLB) for positioning with LIS are derived, which can decrease in the third-order of surface-area in near-field.

Implementing LIS in practical is however, challenging and requires new technologies in fields such as material, radio-frequency, hardware integration etc. One important observation form [1] is that after applying match-filtering, the received signal on LIS has a band-limit property, and thusly LIS can be implemented in a discrete-form based on sampling theory. Even so, since a LIS typically has a much larger scale of antenna-elements than Massive MIMO, it is still challenging. Followed by [1, 2], there are some simplifications by implementing LIS as reflecting (passive) surfaces [4, 5], which is similar to reflectarray antennas [6].

In this letter we extend the planar LIS into a spherical design depicted in Fig. 1, to cooperate with future networks that from the ground to space comprise of terrestrial cellular networks, unmanned aerial vehicle (UAV) networks, and satellites. A spherical LIS has many advantages compare to a planar one due to its geometric shape. It can also be seen as an extension of traditional spherical arrays [8].

The radiating signal from a terminal to the spherical LIS is depicted in Fig. 2. Expressed in Cartesian coordinates, the center of the spherical LIS is located at x=y=z=0, while the terminal is located at (xk,yk,zk). Due to the isotropic property of a spherical LIS, we can equivalently let the terminal located at position (0,0,√x2k+y2k+z2k) (by rotating the ball). For simplicity we still assume the terminal-position as (0,0,zk). and for analytical tractability a perfect line-of-sight (LoS) propagation scenario is considered. Following similar analysis in [1] and under line-of-sight (LoS), the received signal at location (x,y,z) on LIS (with a unit transmit-power and without receiving noise) can be modeled as

where the path-attenuation is PL=1/(4πη2k), and ψ is angle-of-arriving (AoA). We assume a narrow-band (NB) system at a carrier-frequency is fc whose wavelength is λ, and Δt=ηk/(λfc) is the transmit-time from the terminal to the LIS with a distance

Seen from Fig.2, it holds from cosine theorem that

where R is the radius of the spherical LIS. Transforming to spherical coordinates by setting

with a normalized distance

The surface-region where the LIS can receive (transmit) signals from (to) the terminal is θ∈[0,θ0), and

Ii-B Advantages of Spherical LIS over a Planar LIS

There are several advantages of a spherical LIS compared to a planar LIS. The most fundamental advantage is the isotropic property of the spherical LIS. That is, rotating a terminal around the center of LIS will not change the information-theoretical properties. This brings several substantial gains in average received signal strength (RSS). It also has the advantage that a simple positioning method can be based on the boundary on the surface where LIS can receive signal, i.e., measuring θ0 as in (8), which utilizes the geometric shape of the LIS. In ideal implementation, θ0

can be accurately estimated and the terminal can be positioned . Another advantage is a feasible design of reflecting surface where partial of the spherical LIS is used for collecting signal, while the other part is used for redirection the signal to a targeted terminal. Moreover, the phases can be compensated both at receiving and transiting based on the estimated position of the terminal. We will elaborate these nice properties of a spherical LIS in what follows.

When receiving at the maximum ^θ=θ0, it holds that

On the other hand, the RSS of a planar LIS in a disk-shape and of radius R, for a given user located at (0,zksinθ,zkcosθ) (for a disk-shaped planar LIS, we can always rotate the disk such that the terminal located on x=0), which from [1] it can be shown that

Note that when R is sufficiently large, it holds that Psp(1)=Ppl(0)=1/2, and half of the transmitting power propagating towards the LIS are received both at a spherical and a planar LIS. Further, to see gains with a spherical LIS, we let τ→1 and it holds that

On the other hand, letting τ→∞ yields

With spherical LIS, the positioning becomes simpler and only z-dimension needs to be estimated. Considering an idea LoS case, based on the measured angle ~θ0 on the LIS, the direction of the terminal aligns with the line that connects the center of the sphere and the center of the cross-section circle corresponding to the cone that can receive signals. Meanwhile, the distance can be estimated from (8) as

This yields a simple positioning technique.

As an auxiliary method, we can also set

and measure a series of RSS, which holds from (9) that

Based on which, we can obtain a series of estimates for τ, where the estimate of zk can be obtained.

Under Non-LoS (NLOS) scenario, there could be multiple paths reaching the LIS. Then, similar to positioning in traditional antenna-array systems, one needs to estimate the multiple-path components (MPC) and find the strongest LoS path. Afterwards, similar positioning can be carried out as under LoS case. Further, if there are multiple LIS deployed around, estimates from different LISs can be combined to refine the positioning.

Nevertheless, we consider the CLRB for positioning τ. A direct approach would be evaluating the Fisher-information on received signal model (5) following similar approaches as in [2]. However, since we are more interest in the decreasing rate of CRLB in relation to the radius R, we use (10) to evaluate the CRLB and assuming the noise is additional white Gaussian noise (AWGN) due to potential hardware impairments.

it shows that the RSS based positioning of τ, i.e., zk decreases in R−6, or cubicly in the surface-area. This shall compared to the case with a planar LIS when the terminal is located at (0,0,zk). From (11) it holds that

As depicted in Fig.3, spherical LIS can also be used as reflecting surfaces aiming at a low-cost design. In which case, the received signal from a traditional base-station can be collected using partial of the surface towards it, and then redirected using another partial surface facing a terminal that is blocked out to the base-station. Due to the simple positioning as introduced earlier with spherical LIS, both the positions of base-station and terminal can be estimated based on the positions, and phases can be compensated when receiving from the base-station and reflecting the received signal. This yields a very flexible and effective designs of reflecting surfaces.

Below we show some simulation results with the spherical LIS. In Fig. 4, the averaged RSS are measured with zk=4 (in meter), where the radius R and τ changes. As can be seen, when τ>2, the approximation of RSS for planar LIS in (11) are quite accurate and aligned with numerical results. Further, spherical LIS provides substantial RSS gains. The ratio γ is plotted in Fig. 5, where we can see that as τ→∞, γ converges to π/2 both for numerical and analytical results. In Fig. 6, we plotted the CRLBs obtained in (18) and (19), respectively, where when R is small the CRLBs are close and decrease in 6th order of R (i.e., 1/tau). As R increases, spherical LIS outperforms planar LIS.

In this letter we have extended current planar LIS into a spherical design, which yields many advantages. We have shown analytically that a spherical LIS can yield higher RSS and lower positioning CRLB compared to a planar one. Asymptotic properties are also analyzed which are aligned with simulation results. In addition, spherical LIS can also be used as flexible and low-cost reflecting surfaces.