Speeding Up Constrained k-Means Through 2-Means 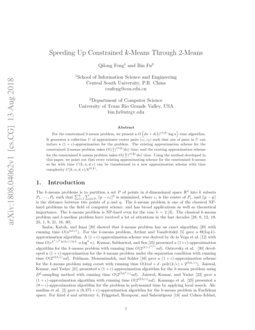 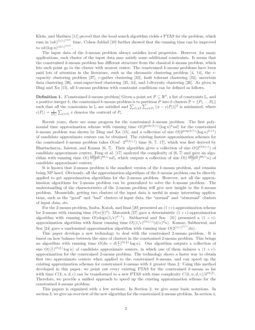 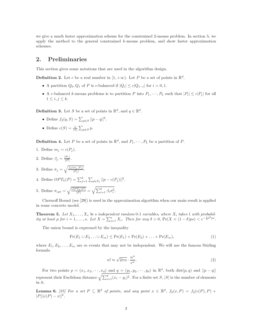 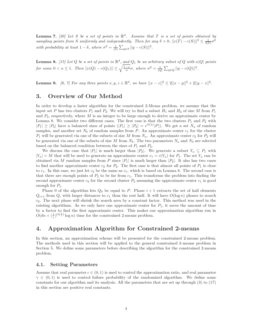 Recent years, there are some progress for the constrained k-means problem. The first polynomial time approximation scheme with running time O(2poly(k/ϵ)(logn)knd) for the constrained k-means problem was shown by Ding and Xu [15], and a collection of size O(2poly(k/ϵ)(logn)k+1) of candidate approximate centers can be obtained. The existing fastest approximation schemes for the constrained k-means problem takes O(nd⋅2~O(k/ϵ)) time [6, 7, 17], which was first derived by Bhattacharya, Jaiswai, and Kumar [6, 7]. Their algorithm gives a collection of size O(2~O(k/ϵ)) of candidate approximate centers. Feng et al. [17] analyzed the complexity of [6, 7] and gave an algorithm with running time O((1891ekϵ2)8k/ϵnd), which outputs a collection of size O((1891ekϵ2)8k/ϵn) of candidate approximate centers.

This section gives some notations that are used in the algorithm design.

Chernoff Bound (see [29]) is used in the approximation algorithm when our main result is applied in some concrete model.

The union bound is expressed by the inequality

where E1,E2,…,Em are m events that may not be independent. We will use the famous Stirling formula

3 Overview of Our Method

Phase 0 of the algorithm lets Q0 be equal to P. Phase i+1 extracts the set of half elements Qi+1 from Qi with larger distances to c1 than the rest half. It will have O(logn) phases to search c2. The next phase will shrink the search area by a constant factor. This method was used in the existing algorithms. As we only have one approximate center for P1, it saves the amount of time by a factor to find the first approximate center. This makes our approximation algorithm run in O(dn+(1ϵ)O(1ϵ)logn) time for the constrained 2-means problem.

The parameters satisfy the following conditions (18) to (21):

Input: P is a set of points in Rd, and real parameter ϵ∈(0,1) to control accuracy of approximation.

Let c1 be the approximate center of P1 via the algorithm.

The algorithm 2-Means(.) has the following properties:

Proof: The Lemma is proven with the following cases.

Assume that V only contains elements in Pi (1≤i≤2). Then with probability at least 1−γ4 (γ4≤γ6), the approximate center ci satisfies the inequality

Proof:  It follows from Lemma 7. Let δ∗=γ6. This is because

We discuss the two different cases. They are based on the size of Pout2.

Proof:  By the definition of B2, we have the following inequalities: