In this paper, we propose a novel speech enhancement (SE) method by exploiting the discrete wavelet transform (DWT). This new method reduces the amount of fast time-varying portion, viz. the DWT-wise detail component, in the spectrogram of speech signals so as to highlight the speech-dominant component and achieves better speech quality. A particularity of this new method is that it is completely unsupervised and requires no prior information about the clean speech and noise in the processed utterance. The presented DWT-based SE method with various scaling factors for the detail part is evaluated with a subset of Aurora-2 database, and the PESQ metric is used to indicate the quality of processed speech signals. The preliminary results show that the processed speech signals reveal a higher PESQ score in comparison with the original counterparts. Furthermore, we show that this method can still enhance the signal by totally discarding the detail part (setting the respective scaling factor to zero), revealing that the spectrogram can be down-sampled and thus compressed without the cost of lowered quality. In addition, we integrate this new method with conventional speech enhancement algorithms, including spectral subtraction, Wiener filtering, and spectral MMSE estimation, and show that the resulting integration behaves better than the respective component method. As a result, this new method is quite effective in improving the speech quality and well additive to the other SE methods. 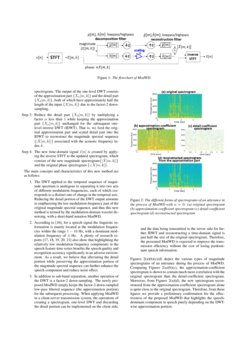 In various speech-related applications, an input speech signal often suffers from environmental noise and requires further processing with a speech enhancement method to improve the associated quality before being of use. By and large, speech enhancement methods can be divided into two classes: unsupervised and supervised. Unsupervised methods, such as spectral subtraction (SS) [1, 2, 3], Wiener filtering [4, 5], short-time spectral amplitude (STSA) estimation [6] and short-time log-spectral amplitude estimation (logSTSA) [7]. By contrast, supervised speech enhancement methods use a training set to learn distinct models for clean speech and noise signals, which examples include codebook-based approaches [8]

Conventional speech enhancement methods usually process a noisy utterance in a frame-wise manner, viz. to enhance each short-time period of the utterance nearly independently. However, recent researches show that considering the inter-frame variation over a relatively long span of time can contribute to superior performance in speech enhancement. Some well-known methods along this direction include modulation domain spectral subtraction [10]

. In addition, compared with the conventional Fourier transform in which only the frequency parts are considered, the discrete wavelet transform (DWT)

[13] takes care of both the time and frequency aspects of a signal and is becoming popular in speech analysis. For example, the well-known wavelet thresholding denoising (WTD) [14] uses the wavelet transform to split the time-domain signal into sub-bands and then performs thresholding. A recent research [15] applies the DWT to the plain speech feature time series and simply keeps the obtained approximation portion, which achieves data compression and noise robustness in recognition simultaneously.

Partially inspired by the aforementioned ideas, in this study we propose to employ the discrete wavelet transform to analyze the spectrogram of a noisy utterance along the temporal axis, and then devalue the resulting detail portion with a hope to reduce noise effect in order to promote speech quality. In spite of the simplicity of its implementation, the preliminary evaluation results indicate that the proposed method can provide input signals with better perceptual quality. It is also shown that this new method can be paired with several well-known speech enhancement methods to achieve even better performance.

The remainder of this study is organized as follows: Section 2 gives the detailed procedure of the newly proposed method together with the associated discussions and a preliminary test using an example utterance. The experimental setup is described in Section 3, and Section 4 includes the detailed experimental results and the corresponding analyses. Finally, a brief concluding remark including the future avenues is stated in Section 5.

Here, we present a novel speech enhancement method that employs the DWT to process the spectrogram of a speech signal. This method has a flowchart shown in Figure 1 and consists of the following four steps:

The main concepts and characteristics of this new method are as follows:

This section presents the database, configurations of the speech enhancement systems, and the evaluation metric.

The experiments use the utterances included in the Aurora-2 database[22], which contains connected English digit utterances generated by both female and male speakers at a sampling rate of 8 kHz. Parts of these utterances are contaminated by various types of noise at different SNRs. In the experiments, 50 airport-noise corrupted utterances belonging to a single speaker were used to form the test set. The SNR levels of the noise-corrupted utterances were varied from 0 dB to 20 dB, with a step of 5 dB.

Some information about the setup of ModWD used in this study is as follows:

Perceptual estimation of speech quality (PESQ) [23] was used as the evaluation metric. PESQ indicates the quality difference between the enhanced and clean speech signals, and it is analogous to the mean opinion score, which is a subjective evaluation index. The PESQ score ranges from 0.5 to 4.5, and a high score indicates that the enhanced utterance is close to the clean utterance.

We first evaluated the proposed ModWD in its capability of enhancing noisy utterances. Then ModWD was integrated with several well-known speech enhancement methods to see if further improvement of speech quality could be achieved.

4.1 ModWD with various settings of the scaling factor α

Table 1 lists the PESQ results with respect to the tested utterances for the baseline and the counterparts processed by ModWD at different values of the scaling factor α for the detail portion. (Notably the unprocessed baseline is identical to ModWD with α=1). From this table, some observations can be made:

Next, we integrated ModWD with several well-known speech enhancement algorithms to see whether such integration can further improve the quality of the testing utterances compared with the individual component method. The algorithms to be integrated include multi-band spectral subtraction (SS) [3], Wiener filtering (WF) [5], short-time log-spectral amplitude estimation (STSA) [6] and short-time log-spectral amplitude estimation (logSTSA) [7]. Please note that interchanging the cascading order of any two algorithms discussed here will behave differently since they are non-linear operations. As for the notations used later, both “A−B” and “B−A” are the cascade of methods A and B, while “A−B” indicates performing method A first and then method B, and “B−A” goes the other way around.

The PESQ results for the integration of ModWD and any of SS, WF, STSA and logSTSA are listed in Tables 2 and 3. Here the scaling factor α of ModWD is set to either of 0 and 0.25. Figures 3 and 4 further summarize these PESQ values averaged over different SNR cases for ease of comparison. From these tables and figures, we have the following findings:

This study presents a DWT-based speech enhancement approach that highlights the low modulation frequency components of the spectrogram so as to reduce the noise effect. In spite of no prior knowledge of the actual distortions adopted, the presented ModWD still improves the quality of utterances in unseen noise environments and is well additive to other speech enhancement methods. As to future work, we will adopt a multi-level DWT to achieve a high resolution in modulation frequency for the analyzed spectrogram and use a validation set to learn the value of scaling factor α in order to further improve the effectiveness of ModWD.