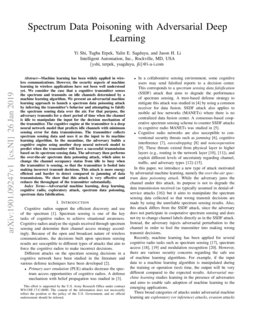 Different attacks on the spectrum sensing decisions in a cognitive network have been studied in the literature and various defense techniques have been developed [2].

In this paper, we introduce a new type of attack motivated by adversarial machine learning, namely the over-the-air spectrum data poisoning attack. While the adversary jams the channel under this attack, its purpose is not to degrade the data transmission received (as typically assumed in denial-of-service attacks [16]) but it aims to manipulate the spectrum sensing data collected so that wrong transmit decisions are made by using the unreliable spectrum sensing results. Also, this attack differs from the SSDF attack, since the adversary does not participate in cooperative spectrum sensing and does not try to change channel labels directly as in the SSDF attack. Instead, the adversary injects adversarial perturbation to the channel in order to fool the transmitter into making wrong transmit decisions.

In this paper, we apply adversarial deep learning to launch an exploratory attack on a cognitive radio as the preliminary step before intentionally changing the transmitter’s sensing results by transmitting when there will be a success transmission if this transmission is not under attack. For that purpose, the adversary trains a deep neural network. We consider a canonical wireless communication scenario with a cognitive transmitter, the corresponding receiver, an adversary, and some other background traffic. The cognitive transmitter builds a machine learning model (based on a deep neural network) to predict the busy and idle states of the channel. The training data includes

Then this machine learning model is used by the cognitive transmitter to make transmit decisions. If a transmission is successful (i.e., the signal-to-interference-plus-noise ratio (SINR) exceeds a threshold), the receiver sends an acknowledgement (ACK) to the transmitter, which can also be overheard by an adversary. The adversary performs an exploratory attack

to build a classifier that can predict the outcome of transmissions, i.e., whether there will be an ACK or not if no attack. Note that this is not a standard exploratory attack and the classifier built by the adversary will not be the same as (or similar to) the classifier used by the transmitter, due to the following two differences.

We show that this adversarial deep learning approach results in an effective attack. In particular, for the scenario studied in numerical results, only few transmission attempts are made and the achieved throughput (normalized by the optimistic throughput by an ideal algorithm to detect every idle channel) drops from 98.96% to 3.13%, when the spectrum data poisoning attack is launched.

We consider a cognitive network that includes a transmitter T, a receiver R, an adversary A and some background traffic source B that may transmit its data. The network topology to generate numerical results is shown in Figure 1. Note that the designed attack schemes can be directly applied to other network topologies.

The activities of B are not known a priori and can be detected via spectrum sensing. Time is divided in slots. Within each slot, the initial short period of time is allocated by T for spectrum sensing and the ending short period of time is allocated for feedback (ACK). The rest of a slot is for data transmission if no other transmission is detected. The decision of T is based on a deep neural network (trained by deep learning) that analyzes sensing results and then determines the channel status such that the channel is busy if background traffic is detected and channel is idle otherwise. Each sensing result is either

We assume that the noise and the received power are random variables with Gaussian distributions.

In this paper, we consider the attack of transmitting in the initial short sensing period to change the sensing result of T for the current time slot. Since this sensing result is an input to T’s classifier on channel status, T may make a wrong decision, even if its classifier algorithm was built well.

We can design a defense mechanism to prevent such attacks by noting that the first step of the attack is an exploratory attack to understand T’s classifier. Thus, T can take wrong actions in a controlled manner such that the ‘ACK’ or ‘no ACK’ results can be changed. As a consequence, the classifier built by an adversary may not work well and thus the attack may become less effective.

Transmitter T needs to sense the spectrum, identify an idle channel (the other transmitter is not transmitting), and then decide when to transmit. T applies deep learning to train a deep neural network classifier that identifies idle channels. This classifier is pre-trained using the most recent 10 sensing results as features and the current channel busy/idle status as a label to build one training sample. The number of sensing results used for one sample is potentially a design parameter for T and can be tuned by T to optimize its performance. Each sensing result is either a Gaussian noise with normalized power 1 (when channel is idle) or noise plus the transmit power from another user gBTP (when channel is busy), where gBT is the channel gain from the other transmitter B to T and P is the transmission power (noise and the channel gain are random variables with Gaussian distributions). After observing certain period of time, T collects a number of samples to be used as training to build a deep learning classifier.

Figure 2 shows the input data and the labels while building T’s classifier. T’s training algorithm is summarized as follows.

Once a classifier is built, T will use it to predict the channel status and transmit if it predicts the channel as idle. This prediction algorithm is summarized as follows.

For this algorithm, there may be two types of errors:

Transmitter T aims to minimize max{eMD,eFA}, where eMD and eFA

are the probabilities of misdetection and false alarm at

We use TensorFlow to build a deep learning classifier for

T. In particular, we use the following deep neural network:

can further optimize the hyperparameters (e.g., number of layers and number of neurons per layer) of its deep neural network. The block diagram in Figure

4 shows T’s operation during the run-time. Note that there is an optional block of defense, which was discussed in Section II.

Background traffic arrives at another transmitter B at rate of 0.8 packet per time slot. When B has queued data packet, it may decide to transmit at rate of 1 packet per time slot and once it transmits, it will continue until the queue is empty. The channel gain gBT is a random variable with a Gaussian distribution and the expected value d−2BT, where dBT is the distance between B and T. In the simulation setting, the location of B is (0,10), the location of T is (0,0), and the transmit power at B is 1000 (normalized with respect to the unit noise power).

T collects 1000 samples (each with the most recent 10 spectrum sensing results and a label (‘idle’ or ‘busy’) and uses half of them as training data and the other half as test data. There are 403 busy and 97 idle channels in the test data. Among them, 3 busy channels are identified as idle. Thus,

Both errors are small, showing that T can reliably predict the channel status.

T transmits data in idle channels detected by its deep learning classifier. If the SNR (or SINR) at receiver R is no less than some threshold, R will confirm a successful transmission by sending an ACK to T. Note that we again assume a Gaussian noise at R and a Gaussian channel gain from T (or B) to R.

To measure the throughput performance of T’s algorithm, we compare it with an ideal algorithm that can correctly detect all idle channels. Thus, the achieved normalized throughput t is defined as the ratio of the number of successful transmissions to the number of slot with idle channel instances. Without an attack, t is measured as

There is an adversary A that aims to reduce transmitter T’s performance. As the first step, it needs to launch an exploratory attack to infer T’s classifier. In particular, A senses the spectrum, predicts whether there will be a successful transmission (if no attack), and performs certain attacks if there will be a successful transmission. There are four cases:

Ideally, the last two cases should be rare cases. We assume that A can hear ACKs for T’s transmissions (but does not decode them). A uses the most recent 10 sensing results as the features and the current feedback (‘ACK’ vs. ‘no ACK’) as the label to build one training sample. The number of sensing results used for one sample is potentially a design parameter for A and can be tuned by A to optimize the impact of its attack.

The process of building such a classifier can be regarded as an exploratory attack, since A aims to build a classifier to infer the operation of T. The classifier built by A is similar to T’s classifier. However, there are the following two differences between the classifiers built by T and A.

Once a classifier is built, A uses it to predict whether there is a successful transmission (if no attack). This prediction algorithm is given as follows.

For this algorithm, there may be two types of errors:

A aims to minimize max{~eMD,~eFA}, where ~eMD and ~eFA are the probabilities of misdetection and false alarm at A, respectively. We use TensorFlow to build a deep learning classifier for A. The deep neural network structure is the same as the one used by T (described in Section III). As the features and labels are different for T and T, they individually train their deep neural network (i.e., determine their own weights and biases).

Both errors are small, showing that A can reliably predict the successful transmissions by T.

With the output of A’s classifier, A performs an attack by transmitting in the initial short sensing period to change T’s sensing result for the current time slot. This sensing result is one feature of T’s classifier and thus T may make a wrong decision, even if its classifier algorithm was built well. Compared with a continuous jamming attack, this attack targets the initial sensing period that is much shorter than the data transmission period. Hence, the power consumption of this attack is much less than continuous jamming. In the simulation, the transmit power at A is set as 1000.

and the overall success ratio is measured as

As a result, A reduces the throughput of T significantly from 98.96% to 3.13% and reduces the success ratio from 96.94% to 75%. Table I summarizes the performance of T with and without an attack, and demonstrates the success of this attack.

We applied adversarial machine learning (based on deep neural networks) to design an over-the-air spectrum sensing data poisoning attack that manipulates the input data of the transmitter during the run-time and fools it into making wrong transmit decisions. The proposed attack is preferable for the adversary with a power constraint since the adversary only needs to transmit for a short period of time to manipulate the transmit decisions of the transmitter. Moreover, it is not easy to detect such an attack due to the short period of transmit time. We showed that this attack substantially decreases the throughput of the transmitter, while forcing it to make few transmission attempts. The results show the effectiveness of the proposed spectrum poisoning attack, which raises the need of new defense mechanisms to protect wireless communications against intelligent attacks based on adversarial machine learning.