We analyze a new spectral graph matching algorithm, GRAph Matching by Pairwise eigen-Alignments (GRAMPA), for recovering the latent vertex correspondence between two unlabeled, edge-correlated weighted graphs. Extending the exact recovery guarantees established in the companion paper for Gaussian weights, in this work, we prove the universality of these guarantees for a general correlated Wigner model. In particular, for two Erdős-Rényi graphs with edge correlation coefficient 1-σ^2 and average degree at least polylog(n), we show that GRAMPA exactly recovers the latent vertex correspondence with high probability when σ≲ 1/polylog(n). Moreover, we establish a similar guarantee for a variant of GRAMPA, corresponding to a tighter quadratic programming relaxation of the quadratic assignment problem. Our analysis exploits a resolvent representation of the GRAMPA similarity matrix and local laws for the resolvents of sparse Wigner matrices. 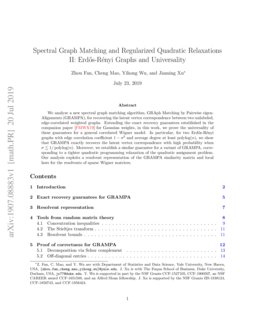 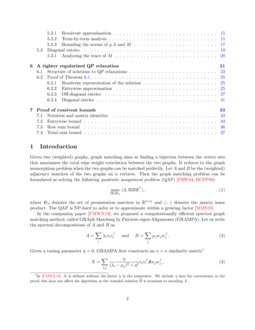 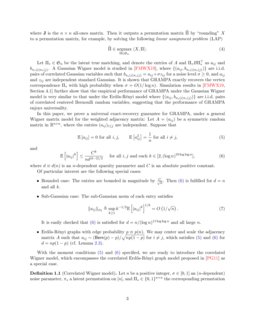 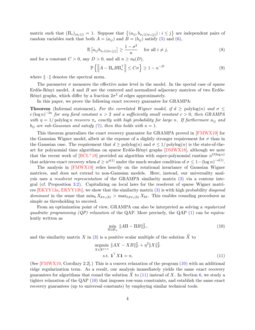 In the graph matching problem we observe two graphs G,H and the goal is ...
Ernesto Araya, et al. ∙

Graph matching: relax or not?

where Sn denotes the set of permutation matrices in Rn×n and ⟨⋅,⋅⟩ denotes the matrix inner product. The QAP is NP-hard to solve or to approximate within a growing factor [MMS10].

In the companion paper [FMWX19], we proposed a computationally efficient spectral graph matching method, called GRAph Matching by Pairwise eigen-Alignments (GRAMPA). Let us write the spectral decompositions of A and B as

Given a tuning parameter η>0, GRAMPA first constructs an n×n similarity matrix111In [FMWX19], X is defined without the factor η in the numerator. We include η here for convenience in the proof; this does not affect the algorithm as the rounded solution ˆΠ is invariant to rescaling X.

Let Π∗∈Sn be the latent true matching, and denote the entries of A and Π∗BΠ⊤∗ as aij and bπ∗(i)π∗(j). A Gaussian Wigner model is studied in [FMWX19], where {(aij,bπ∗(i)π∗(j))} are i.i.d. pairs of correlated Gaussian variables such that bπ∗(i)π∗(j)=aij+σzij for a noise level σ≥0, and aij and zij are independent standard Gaussian. It is shown that GRAMPA exactly recovers the vertex correspondence Π∗ with high probability when σ=O(1/logn). Simulation results in [FMWX19, Section 4.1] further show that the empirical performance of GRAMPA under the Gaussian Wigner model is very similar to that under the Erdős-Rényi model where {(aij,bπ∗(i)π∗(j))}

In this paper, we prove a universal exact-recovery guarantee for GRAMPA, under a general Wigner matrix model for the weighted adjacency matrix: Let A=(aij)

be a symmetric random matrix in

where d≡d(n) is an n-dependent sparsity parameter and C is an absolute positive constant.

Of particular interest are the following special cases:

With the moment conditions eq:centerscale and eq:momentcond specified, we are ready to introduce the correlated Wigner model, which encompasses the correlated Erdős-Rényi graph model proposed in

where ∥⋅∥ denotes the spectral norm.

The parameter σ measures the effective noise level in the model. In the special case of sparse Erdős-Rényi model, A and B are the centered and normalized adjacency matrices of two Erdős-Rényi graphs, which differ by a fraction 2σ2 of edges approximately.

In this paper, we prove the following exact recovery guarantee for GRAMPA:

For the correlated Wigner model, if d≥polylog(n) and σ≤c(logn)−2κ for any fixed constant κ>2 and a sufficiently small constant c>0, then GRAMPA with η=1/polylogn recovers π∗ exactly with high probability for large n. If furthermore aij and bij are sub-Gaussian and satisfy (7), then this holds with κ=1.

This theorem generalizes the exact recovery guarantee for GRAMPA proved in [FMWX19] for the Gaussian Wigner model, albeit at the expense of a slightly stronger requirement for σ than in the Gaussian case. The requirement that d≥polylog(n) and σ≤1/polylog(n) is the state-of-the-art for polynomial time algorithms on sparse Erdős-Rényi graphs [DMWX18], although we note that the recent work of [BCL+18] provided an algorithm with super-polynomial runtime nO(logn) that achieves exact recovery when d≥no(1) under the much weaker condition of σ≤1−(logn)−o(1).

The analysis in [FMWX19] relies heavily on the rotational invariance of Gaussian Wigner matrices, and does not extend to non-Gaussian models. Here, instead, our universality analysis uses a resolvent representation of the GRAMPA similarity matrix eq:specrep via a contour integral (cf. Proposition 3.2). Capitalizing on local laws for the resolvent of sparse Wigner matrices [EKYY13a, EKYY13b], we show that the similarity matrix eq:specrep is with high probability diagonal dominant in the sense that minkXkπ∗(k)>maxℓ≠π∗(k)Xkℓ. This enables rounding procedures as simple as thresholding to succeed.

From an optimization point of view, GRAMPA can also be interpreted as solving a regularized quadratic programming (QP) relaxation of the QAP. More precisely, the QAP eq:QAP can be equivalently written as

and the similarity matrix X in eq:specrep is a positive scalar multiple of the solution ˜X to

(See [FMWX19, Corollary 2.2].) This is a convex relaxation of the program eq:qap-equiv with an additional ridge regularization term. As a result, our analysis immediately yields the same exact recovery guarantees for algorithms that round the solution ˜X to eq:regQP instead of X. In Section 6, we study a tighter relaxation of the QAP eq:qap-equiv that imposes row-sum constraints, and establish the same exact recovery guarantees (up to universal constants) by employing similar technical tools.

The rest of the paper is organized as follows. In Section 2, we state the main exact recovery guarantees for GRAMPA under the correlated Wigner model, as well as the results specialized to the (sparse) Erdős-Rényi model. We start the analysis by introducing the key resolvent representation of the GRAMPA similarity matrix in Section 3. As a preparation for the main proof, Section 4 provides the needed tools from random matrix theory. The proof of correctness for GRAMPA is then presented in Section 5. In Section 6, we extend the theoretical guarantees to a tighter QP relaxation. Finally, Section 7 is devoted to proving the resolvent bounds which form the main technical ingredient to our proofs.

1=1n be the all-ones vector. Let J=Jn denote the n×n all-ones matrix, and let I=In denote the n×nidentity matrix. The subscripts are often omitted when there is no ambiguity.

In this section, we state the the exact recovery guarantees for GRAMPA, making the earlier informal statement precise.

If there is a universal constant K for which aij and bij are sub-Gaussian with ∥aij∥ψ2,∥bij∥ψ2≤K/√n, then the above holds also with κ=1.

As an immediate corollary, we obtain the following exact recovery guarantee for GRAMPA.

Under the conditions of Theorem 2.1, there exist constants c,c′>0 such that for all n≥n0, if

then with probability at least 1−n−10,

We transform the adjacency matrices A and B so that they satisfy the moment conditions (5) and (6): Define the centered, rescaled versions of A and B by

Then (5) clearly holds, and we check the following additional properties.

Assume without loss of generality that Π∗ is the identity matrix. For any k≥2 we have

Thus, the moment condition (6) is satisfied. In addition, we have that for all i<j,

and hence the solution ˆΠ to the linear assignment problem (4) coincides with Π∗.

For a real symmetric matrix A with spectral decomposition (2), its resolvent is defined by

For any z∈C∖R and any real symmetric matrix A,

By the definition of R(z)≡RA(z) and conjugate symmetry, it holds

The following resolvent representation of X is central to our analysis.

Consider symmetric matrices A and B with spectral decompositions (2), and suppose that ∥A∥≤2.5. Then the matrix X defined in eq:specrep admits the following representation

is the rectangular contour with vertices ±3±iη/2.

by Lemma 3.1. Consider the function f:C→Cn×n defined by f(z)=JRB(z+iη). Then each entry fkℓ is analytic in the region {z:Imz>−η}. Since Γ

λi of A, the Cauchy integral formula yields entrywise equality

Substituting this into (18), we obtain

which completes the proof in view of the definition of f. ∎

Before proving our main results, we introduce the relevant tools from random matrix theory. In particular, the resolvent bounds in Theorem 4.5 constitute an important technical ingredient in our analysis.

We start with some known concentration inequalities in the literature.

Next, based on the above lemma, we state concentration inequalities for a bilinear form that apply to our setting directly.

Let α,β∈Rn be random vectors such that the pairs (αi,βi) for i∈[n] are independent, with

Let M∈Cn×n be any deterministic matrix.

In view of the polarization identity

it suffices to analyze the two terms separately. Note that

which yields the desired expectation E[α⊤Mβ]=1−σ2nTrM. Thus it remains to study the deviation.

To prove the concentration bound eq:diag, we obtain from eq:quad1 that, there is a universal constant c>0 such that with probability at least 1−e−c(logn)1+ε,

from which eq:diag easily follows.

The sub-Gaussian concentration bound eq:bilinear_wigner follows from the Hanson-Wright inequality [HW71, RV13]. More precisely, note that max{∥α+β∥ψ2,∥α−β∥ψ2}≤∥α∥ψ2+∥β∥ψ2≤2K/√d, so taking δ=n−D/2 in [FMWX19, Lemma A.2] yields that with probability at least 1−n−D,

Denote the semicircle density and its Stieltjes transform by

We record the following basic facts about the Stieltjes transform.

For each z∈C∖R, the Stieltjes transform m0(z) is the unique value satisfying

For a fixed constant a>0 and all large n, we bound the resolvent R(z)=RA(z) over the spectral domain

Suppose A∈Rn×n has independent entries (aij)i≤j satisfying (5) and (6). Fix a constant a>0 which defines the domain D, fix ε>0, and set

Suppose n≥d≥(logn)b′. Then for some constants C,c,n0>0 depending on a and ε, and for all n≥n0, with probability 1−e−c(logn)(loglogn), the following hold simultaneously for every z∈D:

The proof follows ideas of [EKYY13b], and we defer this to Section 7. As the spectral parameter z is allowed to converge to the interval [−2,2] with increasing n, this type of result is often called a “local law” in the random matrix theory literature. The focus of the above is a bit different from the results stated in [EKYY13b], as we wish to obtain explicit logarithmic bounds for |Imz|≍1<span class