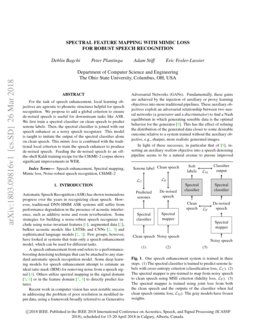 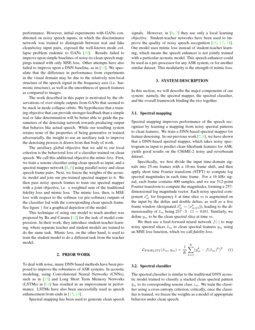 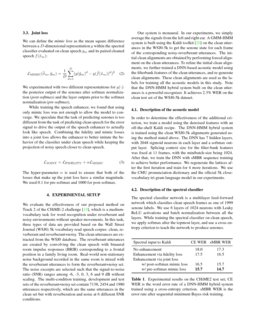 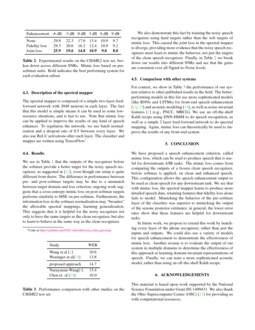 Automatic Speech Recognition (ASR) has shown tremendous progress over the years in recognizing clean speech. However, traditional DNN-HMM ASR systems still suffer from performance degradation in the presence of acoustic interference, such as additive noise and room reverberation. Some strategies for building a noise-robust speech recognizer include using noise-invariant features [1], augmented data [2], bulkier acoustic models like LSTMs and CNNs [2, 3] and sophisticated language models [2, 3]. Few groups, however, have looked at systems that train only a speech enhancement model, which can be used for different tasks.

A speech enhancement front-end refers to a performance-boosting denoising technique that can be attached to any standard automatic speech recognition model. Some deep learning models for speech enhancement attempt to estimate an ideal ratio mask (IRM) for removing noise from a speech signal

[4]. Others utilize spectral mapping in the signal domain [5, 6] or in the feature domain [7, 8] to directly predict features.

Recent work in computer vision has seen notable success in addressing the problem of poor resolution in modified input data, using a framework broadly referred to as Generative Adversarial Networks (GANs). Fundamentally, these gains are achieved by the injection of auxiliary or proxy learning objectives into more traditional pipelines. These auxiliary objectives exploit an adversarial relationship between two neural networks (a

generator and a discriminator) to find a Nash equilibrium in which generating sensible data is the optimal behavior for the generator [9]. This has the effect of refining the distribution of the generated data closer to some desirable outcome relative to a system trained without the auxiliary objective, e.g., sharper, more realistic generated images.

In light of these successes, in particular that of [9], inserting an auxiliary realism objective into a speech denoising pipeline seems to be a natural avenue to pursue improved performance. However, initial experiments with GANs conditioned on noisy speech inputs, in which the discriminator network was trained to distinguish between real and fake clean/noisy input pairs, exposed the well-known mode collapse problem endemic to GANs [10]. Results failed to improve upon simple baselines of noisy-to-clean speech mappings trained with only MSE loss. Other attempts have also failed to improve upon a DNN baseline, as in [11]. We speculate that the difference in performance from experiments in the visual domain may be due to the relatively non-local structure of the speech signal in the frequency axis (i.e. harmonic structure), as well as the smoothness of speech features as compared to images.

The work described in this paper is motivated by the observations of over-simple outputs from GANs that seemed to be stuck in mode collapse orbits. We hypothesize that a training objective that can provide stronger feedback than a simple real or fake determination will be better able to guide the parameters of the denoising network towards producing output that behaves like actual speech. While our resulting system retains none of the properties of being generative or trained adversarially, the insight to use an auxiliary task to improve the denoising process is drawn from that body of work.

This technique of using one model to teach another was proposed by Ba and Caruna [12] for the task of model compression. In their work, they introduce student-teacher learning, where separate teacher and student models are trained to do the same task. Mimic loss, on the other hand, is used to train the student model to do a different task from the teacher model.

To deal with noise, many DNN based methods have been proposed to improve the robustness of ASR systems. In acoustic modeling, using Convolutional Neural Networks (CNNs), such as in

[14] has resulted in an improvement in performance. LSTMs have also been successfully used as speech enhancement front-ends in [15, 14].

Spectral mapping has been used to generate clean speech signals. However, in [8, 7] they use only a local learning objective. Student-teacher networks have been used to improve the quality of noisy speech recognition [16, 17, 18]. Our model uses mimic loss instead of student-teacher learning, which means the speech enhancer is not jointly trained with a particular acoustic model. This speech enhancer could be used as a pre-processor for any ASR system, or for another similar dataset. This modularity is the strength of mimic loss.

In this section, we will describe the major components of our system: namely, the spectral mapper, the spectral classifier, and the overall framework binding the two together.

Specifically, we first divide the input time-domain signals into 25-ms frames with a 10-ms frame shift, and then apply short time Fourier transform (STFT) to compute log spectral magnitudes in each time frame. For a 16 kHz signal, each frame contains 400 samples, and we use 512-point Fourier transform to compute the magnitudes, forming a 257-dimensional log magnitude vector. Each noisy spectral component

xkm for frequency k at time slice m is augmented on the input by the deltas and double deltas, as well as a five frame window (designated ~xkm=[xkm±5]), leading to the dimensionality of ~xm being 257⋅3⋅11=8481. Similarly, we define ym to be the clean spectral slice at time m.

We then use a feed-forward neural network

using an MSE loss function, which we call

The spectral classifier is similar to the traditional DNN acoustic model trained to classify a stacked clean spectral pattern ~ym to its corresponding senone class zm. We train the classifier using a cross entropy criterion; critically, once the classifier is trained, we freeze the weights as a model of appropriate behavior under clean speech.

We can define the mimic loss as the mean square difference between a D-dimensional representation g within the spectral classifier evaluated on clean speech ym and its paired cleaned speech f(~xm):

While training the speech enhancer, we found that using only mimic loss was not enough to allow the model to converge. We speculate that the task of predicting senones is too different from the task of predicting clean speech for the error signal to drive the output of the speech enhancer to actually look like speech. Combining the fidelity and mimic losses into a joint loss allows the enhancer to better imitate the behavior of the classifier under clean speech while keeping the projection of noisy speech closer to clean speech.

The hyper-parameter α is used to ensure that both of the losses that make up the joint loss have a similar magnitude. We used 0.1 for pre-softmax and 1000 for post-softmax.

We evaluate the effectiveness of our proposed method on Track 2 of the CHiME-2 challenge [19], which is a medium-vocabulary task for word recognition under reverberant and noisy environments without speaker movements. In this task, three types of data are provided based on the Wall Street Journal (WSJ0) 5k vocabulary read speech corpus: clean, reverberant and reverberant+noisy. The clean utterances are extracted from the WSJ0 database. The reverberant utterances are created by convolving the clean speech with binaural room impulse responses (BRIR) corresponding to a frontal position in a family living room. Real-world non-stationary noise background recorded in the same room is mixed with the reverberant utterances to form the reverberant+noisy set. The noise excerpts are selected such that the signal-to-noise ratio (SNR) ranges among -6, -3, 0, 3, 6 and 9 dB without scaling. The multi-condition training, development and test sets of the reverberant+noisy set contain 7138, 2454 and 1980 utterances respectively, which are the same utterances in the clean set but with reverberation and noise at 6 different SNR conditions.

4.1 Description of the acoustic model

In order to determine the effectiveness of the additional criterion, we train a model using the denoised features with an off-the-shelf Kaldi recipe. The DNN-HMM hybrid system is trained using the clean WSJ0-5k alignments generated using the method stated above. The DNN has 7 hidden layers, with 2048 sigmoid neurons in each layer and a softmax output layer. Splicing context size for the filter-bank features was fixed at 11 frames, with the minibatch-size being 1024. After that, we train the DNN with sMBR sequence training to achieve better performance. We regenerate the lattices after the first iteration and train for 4 more iterations. We use the CMU pronunciation dictionary and the official 5k close-vocabulary tri-gram language model in our experiments.

4.2 Description of the spectral classifier

The spectral classifier network is a multilayer feed-forward network which classifies clean speech frames as one of 1999 senone labels. We use 6 layers of 1024 neurons with Leaky ReLU activations and batch normalization between all the layers. While training the spectral classifier on clean speech, we apply softmax after the topmost layer, and use a cross entropy criterion to teach the network to produce senones.

4.3 Description of the spectral mapper

The spectral mapper is composed of a simple two-layer feed-forward network with 2048 neurons in each layer. The fact that this model is simple means it can be used in some low-resource situations, and is fast to use. Note that mimic loss can be applied to improve the results of any kind of speech enhancer. To regularize the network, we use batch normalization and a dropout rate of 0.5 between every layer. We also use ReLU activations after each layer. The classifier and mapper are written using TensorFlow

We see in Table 1 that the outputs of the recognizer before the softmax provide a better target for the noisy speech recognizer, as suggested in [12], even though our setup is quite different from theirs. The difference in performance between pre- and post-softmax targets may be due to a mismatch between target domain and loss criterion; ongoing work suggests that a cross-entropy mimic loss on post-softmax targets performs similarly to MSE on pre-softmax. Furthermore, the information loss in the softmax normalization may “broaden” the allowable spectral mappings, harming generalization. This suggests that it is helpful for the noisy recognizer not only to have the same targets as the clean recognizer, but also to learn to behave in the same way as the clean recognizer.

4.5 Comparison with other systems

For context, we show in Table 3 the performance of our system relative to other published results in the field. The better-performing models in this list use more sophisticated models (like RNNs and LSTMs) for front-end speech enhancement [14, 15] and acoustic modeling [14], as well as noise-invariant features [1] (e.g., PNCC, MRCG). We use an off-the-shelf Kaldi recipe using DNN-HMM to do speech recognition, as well as a simple 2 layer feed-forward network to do spectral mapping. Again, mimic loss can theoretically be used to improve the results of any front-end system.

We have proposed a speech enhancement criterion, called mimic loss, which can be used to produce speech that is useful for downstream ASR tasks. The mimic loss comes from comparing the outputs of a frozen clean speech recognizer, before softmax is applied, on clean and enhanced speech. This configuration allows the speech enhancement output to be used as clean speech for any downstream task. We see that with mimic loss, the spectral mapper learns to produce more detailed speech data, retaining features that fidelity loss alone fails to model. Mimicking the behavior of the pre-softmax layer of the classifier was superior to mimicking the output of the senone posterior estimates; in general, the lower error rates show that these features are helpful for downstream tasks.

In future work, we propose to extend this work by matching every layer of the phone recognizer, rather than just the inputs and outputs. We could also use a variety of models for speech enhancement to demonstrate the effectiveness of mimic loss. Another avenue is to evaluate the output of our system in multiple domains to determine the effectiveness of this approach at learning domain-invariant representations of speech. Finally, we can train a more sophisticated acoustic model, rather than using an off-the-shelf Kaldi recipe.

This material is based upon work supported by the National Science Foundation under Grant IIS-1409431. We also thank the Ohio Supercomputer Center (OSC) [21] for providing us with computational resources.