Spectral Analysis of Kernel and Neural Embeddings: Optimization and Generalization

We extend the recent results of (Arora et al., 2019) by a spectral analysis of representations corresponding to kernel and neural embeddings. They showed that in a simple single layer network, the alignment of the labels to the eigenvectors of the corresponding Gram matrix determines both the convergence of the optimization during training as well as the generalization properties. We show quantitatively that kernel and neural representations improve both optimization and generalization. We give results for the Gaussian kernel and approximations by random Fourier features as well as for embeddings produced by two layer networks trained on different tasks. 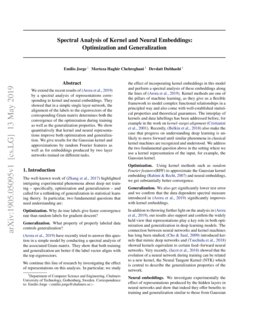 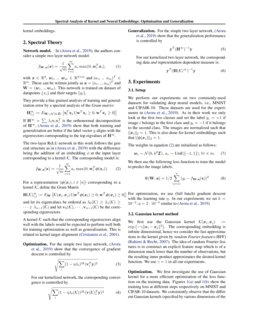 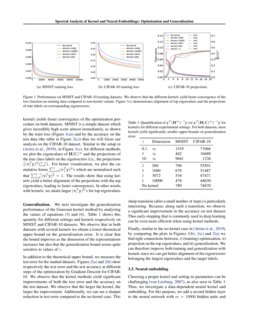 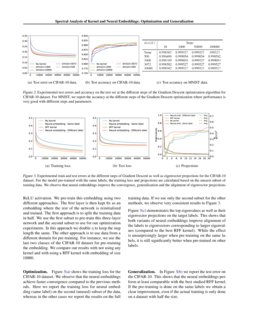 highlighted intriguing experimental phenomena about deep net training – specifically, optimization and generalization – and called for a rethinking of generalization in statistical learning theory. In particular, two fundamental questions that need understanding are:

Optimization. Why do true labels give faster convergence rate than random labels for gradient descent?

have recently tried to answer this question in a simple model by conducting a spectral analysis of the associated Gram matrix. They show that both training and generalization are better if the label vector aligns with the top eigenvectors.

We continue this line of research by investigating the effect of representations on this analysis. In particular, we study the effect of incorporating kernel embeddings in this model and perform a spectral analysis of these embeddings along the lines of (Arora et al., 2019). Kernel methods are one of the pillars of machine learning, as they give us a flexible framework to model complex functional relationships in a principled way and also come with well-established statistical properties and theoretical guarantees. The interplay of kernels and data labellings has been addressed before, for example in the work on kernel–target alignment (Cristianini et al., 2001). Recently, (Belkin et al., 2018)

also make the case that progress on understanding deep learning is unlikely to move forward until similar phenomena in classical kernel machines are recognized and understood. We address the two fundamental question above in the setting where we use a kernel representation of the input, for example, the Gaussian kernel.

In addition to throwing further light on the analysis in (Arora et al., 2019)

, our results also support and confirm the widely held view that representations play a key role in both optimization and generalization in deep learning models. The connection between neural networks and kernel machines has long been studied;

(Jacot et al., 2018) showed that the evolution of a neural network during training can be related to a new kernel, the Neural Tangent Kernel (NTK) which is central to describe the generalization properties of the network.

Neural embeddings. We investigate experimentally the effect of representations produced by the hidden layers in neural networks and show that indeed they offer benefits to training and generalization similar to those from Gaussian kernel embeddings.

They provide a fine grained analysis of training and generalization error by a spectral analysis of the Gram matrix:

If H∞=∑iλivivTi is the orthonormal decomposition of H∞, (Arora et al., 2019) show that both training and generalization are better if the label vector y aligns with the eigenvectors corresponding to the top eigvalues of H∞.

(Arora et al., 2019) with the difference being the addition of an embedding ϕ at the input layer corresponding to a kernel K. The corresponding model is:

For a representation (ϕ(xi),i∈[n]) corresponding to a kernel K, define the Gram Matrix

and let its eigenvalues be ordered as

A kernel K such that the corresponding eigenvectors align well with the labels would be expected to perform well both for training optimization as well as generalization. This is related to kernel target alignment (Cristianini et al., 2001).

For the simple two layer network, (Arora et al., 2019) show that the convergence of gradient descent is controlled by

For our kernelized network, the corresponding convergence is controlled by

For the simple two layer network, (Arora et al., 2019) show that the generalization performance is controlled by

For our kernelized two layer network, the corresponding data and representation dependent measure is:

We perform our experiments on two commonly-used datasets for validating deep neural models, i.e., MNIST and CIFAIR-10. These datasets are used for the experiments in (Arora et al., 2019). As in their work we only look at the first two classes and set the label yi=+1 if image i belongs to the first class and yi=−1 if it belongs to the second class. The images are normalized such that ||xi||2=1. This is also done for kernel embeddings such that ||ϕ(xi)||2=1.

The weights in equation (2) are initialized as follows:

We then use the following loss function to train the model to predict the image labels.

We first use the Gaussian kernel K(xi,xj):=exp(−γ∥xi−xj∥2). The corresponding embedding is infinite dimensional, hence we consider the fast approximations to the kernel given by random Fourier features (RFF) (Rahimi & Recht, 2007). The idea of random Fourier features is to construct an explicit feature map which is of a dimension much lower than the number of observations, but the resulting inner product approximates the desired kernel function. We use γ=1 in all our experiments.

We first investigate the use of Gaussian kernel for a more efficient optimization of the loss function on the training data. Figures 1(a) and 1(b) show the training loss at different steps respectively on MNIST and CIFAR-10 datasets. We consistently observe that the different Gaussian kernels (specified by various dimensions of the kernel) yields faster convergence of the optimization procedure on both datasets. MNIST is a simple dataset which gives incredibly high score almost immediately, as shown by the train loss (Figure 1(a)) and by the accuracy on the test data (the table in Figure 2(c)) thus we will focus our analysis on the CIFAR-10 dataset. Similar to the setup in (Arora et al., 2019), in Figure 1(c), for different methods, we plot the eigenvalues of H(K)∞ and the projections of the true class labels on the eigenvectors (i.e., the projections {(vTiy)2}n−1i=0). For better visualization, we plot the cumulative forms ∑ij=0(vTjy)2’s which are normalized such that ∑n−1i=0(vTiy)2=1. The results show that using kernels yield a better alignment of the projections with the top eigenvalues, leading to faster convergences. In other words, with kernels, we attain larger (vTiy)2’s for top eigenvalues.

We next investigate the generalization performance of the Gaussian kernel method by analyzing the values of equations (5) and (6). Table 1 shows this quantity for different settings and kernels respectively on MNIST and CIFAR-10 datasets. We observe that in both datasets with several kernels we obtain a lower theoretical upper bound on the generalization error. It is clear that the bound improves as the dimension of the representations increases but also that the generalization bound seems quite sensitive to values of γ.

In addition to the theoretical upper bound, we measure the test error for the studied datasets. Figures 2(a) and 2(b) show respectively the test error and the test accuracy at different steps of the optimization by Gradient Descent for CIFAR-10. We observe that the kernel methods yield significant improvements of both the test error and the accuracy on the test dataset. We observe that the larger the kernel, the larger the improvement. Additionally, we can see a sharper reduction in test error compared to the no-kernel case. This sharp transition (after a small number of steps) is particularly interesting. Because, along such a transition, we observe a significant improvement in the accuracy on test dataset. Thus early-stopping that is commonly used in deep learning can be even more efficient when using kernel methods.

Finally, similar to the no-kernel case in (Arora et al., 2019), by comparing the plots in Figures 1(b), 1(c) and 2(a) we find tight connections between, i) (training) optimization, ii) projection on the top eigenvalues, and iii) generalization. We can therefore improve both training and generalization with kernels since we can get better alignment of the eigenvectors belonging the largest eigenvalues and the target labels.

Choosing a proper kernel and setting its parameters can be challenging (von Luxburg, 2007), as also seen in Table 1. Thus, we investigate a data-dependent neural kernel and embedding. For this purpose, we add a second hidden layer to the neural network with m=10000 hidden units and ReLU activation. We pre-train this embedding using two different approaches. The first layer is then kept fix as an embedding where the rest of the network is reinitialized and trained. The first approach is to split the training data in half. We use the first subset to pre-train this three-layer network and the second subset to use for our optimization experiments. In this approach we double η to keep the step length the same. The other approach is to use data from a different domain for pre-training. For instance, we use the last two classes of the CIFAR-10 dataset for pre-training the embedding. We compare our results with not using any kernel and with using a RFF kernel with embedding of size 10000.

Figure 3(a) shows the training loss for the CIFAR-10 dataset. We observe that the neural embeddings achieve faster convergence compared to the previous methods. Here we report the training loss for neural embedding (same label) on the second (unused) subset of the data, whereas in the other cases we report the results on the full training data. If we use only the second subset for the other methods, we observe very consistent results to Figure 3.

Figure 3(c) demonstrates the top eigenvalues as well as their eigenvector projections on the target labels. This shows that both variants of neural embeddings improve alignment of the labels to eigenvectors corresponding to larger eigenvalues (compared to the best RFF kernel). While the effect is unsurprisingly larger when pre-training on the same labels, it is still significantly better when pre-trained on other labels.

In Figure 3(b) we report the test error on the CIFAR-10. This shows that the neural embeddings perform at least comparable with the best studied RFF kernel. If the pre-training is done on the same labels we obtain a clear improvement, even if the actual training is only done on a dataset with half the size.

We extended the recent results of (Arora et al., 2019) by a spectral analysis of the representations corresponding to kernel and neural embeddings and showed that such representations benefit both optimization and generalization. By combining recent results connecting kernel embeddings to neural networks such as (Tsuchida et al., 2018; Jacot et al., 2018), one may be able to extend the fine–grained theoretical results of (Arora et al., 2019) for two layer networks to deeper networks.

This work was partially supported by the Wallenberg AI,Autonomous Systems and Software Program (WASP) funded by the Knut and Alice Wallenberg Foundation as well as the Chalmers AI Research Centre. We are grateful for their support.