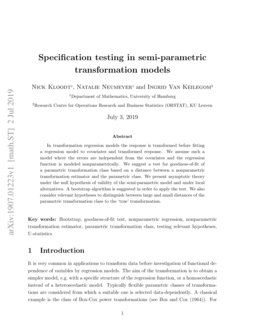 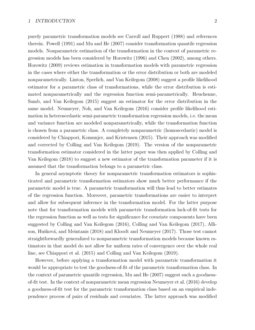 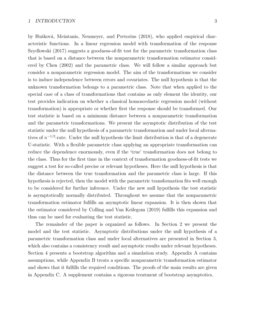 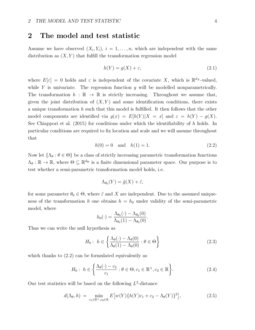 Tests for validity of the semiparametric heteroskedastic transformation model

There exist a number of tests for assessing the nonparametric heterosced...
Marie Hušková, et al. ∙

Does Regression Approximate the Influence of the Covariates or Just Measurement Errors? A Model Validity Test

A criterion is proposed for testing hypothesis about the nature of the e...
Alexander Kukush, et al. ∙

On the Use of L-functionals in Regression Models

In this paper we survey and unify a large class or L-functionals of the ...
Ola Hössjer, et al. ∙

It is very common in applications to transform data before investigation of functional dependence of variables by regression models. The aim of the transformation is to obtain a simpler model, e.g. with a specific structure of the regression function, or a homoscedastic instead of a heteroscedastic model. Typically flexible parametric classes of transformations are considered from which a suitable one is selected data-dependently. A classical example is the class of Box-Cox power transformations (see

, who applied empirical characteristic functions. In a linear regression model with transformation of the response

Colling and Van Keilegom (2019) fulfills this expansion and thus can be used for evaluating the test statistic.

The remainder of the paper is organized as follows. In Section 2 we present the model and the test statistic. Asymptotic distributions under the null hypothesis of a parametric transformation class and under local alternatives are presented in Section 3, which also contains a consistency result and asymptotic results under relevant hypotheses. Section 4 presents a bootstrap algorithm and a simulation study. Appendix A contains assumptions, while Appendix B treats a specific nonparametric transformation estimator and shows that it fulfills the required conditions. The proofs of the main results are given in Appendix C. A supplement contains a rigorous treatment of bootstrap asymptotics.

2 The model and test statistic

Assume we have observed (Xi,Yi), i=1,…,n, which are independent with the same distribution as (X,Y) that fulfill the transformation regression model

where E[ε]=0 holds and ε is independent of the covariate X, which is RdX-valued, while Y is univariate. The regression function g will be modelled nonparametrically. The transformation h:R→R

is strictly increasing. Throughout we assume that, given the joint distribution of

(X,Y) and some identification conditions, there exists a unique transformation h such that this model is fulfilled. It then follows that the other model components are identified via g(x)=E[h(Y)|X=x] and ε=h(Y)−g(X). See Chiappori et al. (2015) for conditions under which the identifiability of h holds. In particular conditions are required to fix location and scale and we will assume throughout that

for some parameter θ0∈Θ, where ~ε and X are independent. Due to the assumed uniqueness of the transformation h one obtains h=h0 under validity of the semi-parametric model, where

Thus we can write the null hypothesis as

which thanks to (2.2) can be formulated equivalently as

Our test statistics will be based on the following L2-distance

where w is a positive weight function with compact support Yw. Its empirical counterpart is

where ^h denotes a nonparametric estimator of the true transformation h as discussed below, and C1⊂R+, C2⊂R are compact sets. Assumption 6 in Appendix A assures that the sets are large enough to contain the true values. The test statistic is defined as

Nonparametric estimation of the transformation h has been considered by Chiappori et al. (2015) and Colling and Van Keilegom (2019). For our main asymptotic results we need that ^h has a linear expansion, not only under the null hypothesis, but also under fixed alternatives and the local alternatives as defined in the next section. The linear expansion should have the form

Here, ψ needs to fulfil condition 8 in Appendix A and we use the definitions (i=1,…,n)

where FY denotes the distribution of Y and is assumed to be strictly increasing on the support of Y. To ensure that T is well defined the values 0 and 1 are w.l.o.g. assumed to belong to the support of Y, but can be replaced by arbitrary values a<b∈R (in the support of Y). The expansion (2.7) could also be formulated with a linear term n−1/2∑ni=1~ψ(Xi,Yi,y). In Appendix B we reproduce the definition of the estimator ^h that was suggested by Colling and Van Keilegom (2019) as modification of the estimator by Chiappori et al. (2015). We give regularity assumptions under which the desired expansion holds, see Lemma B.2. Other nonparametric estimators for the transformation that fulfill the expansion could be applied as well.

Further, recall the definition of Ui in (2.8). Note that the distribution of Ui does not depend on n, even under local alternatives, because FY(Yi)

To formulate our main result we need some more notations. For notational convenience, define γ=(c1,c2,θ)∈Υ:=C1×C2×Θ, which is assumed to be compact (see 1 in Appendix A). Then, note that

and let PZ and FZ denote the law and distribution function, respectively, of Zi.

be the eigenvalues of the operator

be independent and standard normally distributed random variables and let

(W0,W1,…,WK)t follows a multivariate normal distribution with Cov(W0,Wk)=E[~ζ(Z1)ρk(Z1)] for all k=1,…,K. Then, under the local alternative H1,n, Tn converges in distribution to

In particular, under H0 (i.e. for r≡0), Tn converges in distribution to

The proof is given in Appendix C. An asymptotic level-α test should reject H0 if Tn is larger than the (1−α)-quantile of the distribution of T. As the distribution of T depends in a complicated way on unknown quantities, we will propose a bootstrap procedure in Section 4.

Thus, the operator K defined in Theorem 3.1 is positive semi-definite.

Next we consider fixed alternatives of a transformation h that do not belong to the parametric class, i. e.

Assume 1–4, 1 and let ^h estimate h uniformly consistently on compact sets. Then, under H1, limn→∞P(Tn>q)=1 for all q∈R, that is, the proposed test is consistent.

If a suitable test rejects H′0 for some small η (fixed beforehand by the experimenter) the model is considered “good enough” to work with, even if it does not hold exactly. To test those hypotheses we will use the same test statistic as before, but we have to standardize differently. Assume H′0, then h is a transformation which does not belong to the parametric class, i.e. the former fixed alternative H1 holds. Let

The proof is given in Appendix C. A consistent asymptotic level-α-test rejects H′0 if (Tn−nη)/(n^σ2)1/2<uα, where uα is the α-quantile of the standard normal distribution and ^σ2 is a consistent estimator for σ2.

One can show that such a sequence mn always exists.

4 A bootstrap version and simulations

Although Theorem 3.1 shows how the test statistic behaves asymptotically under H0, it is hard to extract any information about how to choose appropriate critical values of a test that rejects H0 for large values of Tn. The main reasons for this are that first for any function ζ the eigenvalues of the operator defined in Theorem 3.1 are unknown, that second this function is unknown and has to be estimated as well, and that third even ψ (which would be needed to estimate ζ) mostly is unknown and rather complex (see e.g. Appendix B). Therefore, approximating the α-quantile, say qα, of the distribution of T in Theorem 3.1 in a direct way is difficult and instead we suggest a smooth bootstrap algorithm to approximate qα.

and let ^g be a consistent estimator of gθ0, where θ0 is defined as in 6 under the null hypothesis and as in 1 under the alternative. Let κ and ℓ be smooth Lebesgue densities on RdX and R, respectively, where ℓ is strictly positive, κ has bounded support and κ(0)>0. Let (an)n and (bn)n be positive sequences with an→0, bn→0, nan→∞, nbdXn→∞. Denote by m∈N the sample size of the bootstrap sample.

The bootstrap algorithm should fulfil two properties: On the one hand, under the null hypothesis the algorithm has to provide, conditionally on the original data, consistent estimates of the quantiles of Tn, or to be precise its asymptotic distribution from Theorem 3.1. To formalize this, let (Ω,A,P) denote the underlying probability space. Assume that (Ω,A) can be written as Ω=Ω1×Ω2 and A=A1⊗A2 for some measurable spaces (Ω1,A1) and (Ω2,A2). Further, assume that P is characterized as the product of a probability measure P1 on (Ω1,A1) and a Markov kernel

With these notations in mind for all q∈(0,∞) it would be desirable to obtain

is used. On the other hand, to be consistent under H1 the bootstrap quantiles have to stabilize or at least converge to infinity with a rate less than that of Tn. To be precise, it is needed that

In the supplement we give conditions under which the bootstrap Algorithm 4.1 has the desired properties (4.2) and (4.3). In particular we need an expansion of ^h∗ as bootstrap counterpart to (2.7). To formulate this, for any realisation w∈Ω1 define

Then for any compact set K⊆R and

for n→∞, where ψ∗ fulfils some assumptions given in the supplement (see assumption (A8*) for details). In the supplement we also give conditions under which for the transformation estimator of Colling and Van Keilegom (2019) the expansion is valid (see Lemma S.8).

with parameter θ∈Θ0=[0,2] is tested. Under H0 we generate data using the transformation h=(Λθ0(⋅)−Λθ0(0))/(Λθ0(1)−Λθ0(0)) to match the identification constraints h(0)=0,h(1)=1. Under the alternative we choose transformations h with an inverse given by the following convex combination,

for some θ0∈[0,2], some strictly increasing function r and some c∈[0,1]. In general it is not clear if a growing factor c leads to a growing distance (2.5). Indeed, the opposite might be the case, if r is somehow close to the class of transformation functions considered in the null hypothesis. Simulations were conducted for r1(Y)=5Φ(Y), r2(Y)=exp(Y) and r3(Y)=Y3, where Φ

c=0.2,0.4,0.6,0.8,1. The prefactor in the definition of r1 is introduced because the values of Φ are rather small compared to the values of Λθ, that is, even when using the presented convex combination in (4.5), Λθ0 (except for c=1) would dominate the “alternative part” r of the transformation function. Note that r2 and Λ0 only differ with respect to a different standardization. Therefore, if h is defined via (4.5) with r=r2 the resulting function is for c=1 close to the null hypothesis case.

For calculating the test statistic the weighting function w was set equal to one. The nonparametric estimator of h was calculated as in Colling and Van Keilegom (2019) (see Appendix B for details) with the Epanechnikov kernel K(y)=34(1−y2)2I[−1,1](<span class="mjx-char MJXc-TeX-math-I" style="padding-top: 0.2