This paper proposes a controllable end-to-end text-to-speech (TTS) system to control the speaking speed (speed-controllable TTS; SCTTS) of synthesized speech with sentence-level speaking-rate value as an additional input. The speaking-rate value, the ratio of the number of input phonemes to the length of input speech, is adopted in the proposed system to control the speaking speed. Furthermore, the proposed SCTTS system can control the speaking speed while retaining other speech attributes, such as the pitch, by adopting the global style token-based style encoder. The proposed SCTTS does not require any additional well-trained model or an external speech database to extract phoneme-level duration information and can be trained in an end-to-end manner. In addition, our listening tests on fast-, normal-, and slow-speed speech showed that the SCTTS can generate more natural speech than other phoneme duration control approaches which increase or decrease duration at the same rate for the entire sentence, especially in the case of slow-speed speech. 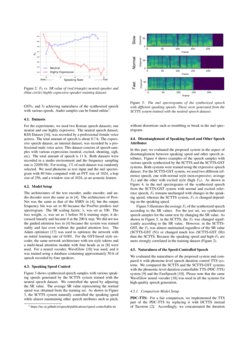 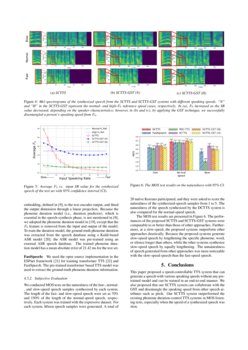 In this paper, we introduce the Variational Autoencoder (VAE) to an end-...
Ya-Jie Zhang, et al. ∙

In the past few years, the naturalness of synthesized speech has been significantly improved owing to the advancement in neural text-to-speech (TTS) methods [tacotron1, tacotron2, deepvoice3, DCTTS]. Speech varies in expressions; however, these models only focus on the generation of narrative-style speech. Therefore, many researches have been recently proposed to control the prosody and speaking speed of the synthesized speech in a TTS system [prosody-tacotron, amazon-fine-graned, neosapience-robust-and-fine-grained, GST, kiast-duration, fastspeech]. This paper focuses on the control of speaking speed that is essential for real scenario because the speaking speed must vary depending on the context or situation.

, various speech attributes, such as pitch, prosody, and speaking speed are extracted from a reference speech and the TTS system generates a similar style of speech to the reference speech. Because it is difficult to define every speech attribute objectively, the TTS system is trained in an unsupervised manner. However, because of this unsupervised learning mechanism, to successfully train and control speech attributes using these systems, the training database should contain a wide variety of styles of speech, and the amount of data in the database should be sufficient. Furthermore, it is very difficult to perfectly disentangle each speech attribute from speech (i.e., when we attempt to control the speaking speed, other speech attributes, such as pitch, may also be modified).

[SR-intro2]. In [SR-intro1], the authors reported that the ratio of the duration of vowels to that of consonants increased as the speaking speed changed from normal to slow.

To overcome these constraints, we propose a speed-controllable TTS (SCTTS) system that adopts a sentence-level speaking rate (SR) as input. The SR value is simply calculated as the ratio of the number of input phonemes to the length of input speech for each sentence. In the training step, by providing the SR value as input, the proposed system learns to predict different alignments with the same text depending on desired speaking speeds. In the inference step, an average SR value obtained from a training database is used to generate a speech with normal speed, and the increased (decreased) SR value is used to generate fast (slow) speech. Furthermore, we improved the robustness of the speaking speed control of the proposed system by adopting a global style token (GST) [GST]. In our pilot study, we found that the speed-control of a TTS system is affected by other speech attributes when the speech database contains various styles of speech samples (e.g., in addition to the speaking speed, other attributes such as pitch are changed). However, the GST-adopted SCTTS (SCTTS-GST) system can control the speaking speed while minimizing the changes in other speech attributes by disentangling it from multiple speech attributes included in the expressive speech. In the inference step, by providing a normal-style reference speech, together with the SR value, the SCTT-GST can control the speaking speed while retaining other speech attributes of normal-style speech.

The key strengths of the proposed SCTTS system are as follows. First, the SCTTS system does not require extra labor-consuming well-trained models to extract the ground-truth phoneme duration and can be trained in an end-to-end manner. Second, the speed-controlled speech generated by the SCTTS system is more natural than that generated using other approaches of increasing or decreasing the phoneme duration at the same rate for the entire sentence. Third, the proposed SCTTS-GST system can control the speaking speed while retaining other speech attributes of normal-style speech even for an expressive dataset.

In this section, we present some background knowledge to understand our proposed method effectively.

[DCTTS], is replaced by the PostNet. Finally, a neural vocoder synthesizes the speech waveform by inputting the predicted mel spectrogram.

Unlike the original DCTTS system, which trains T2M network and SSRN independently, we jointly train the T2M network and the PostNet in end-to-end manner using the following loss function:

To control the speaking speed of the synthesized speech, we proposed the SCTTS system, which applies the sentence-level SR value to the end-to-end TTS system as an additional input. The architecture of the SCTTS system is detailed in Figure 1.

In the training stage, the text sequence, coarse mel spectrogram, and computed SR value are given as inputs. The SR value is replicated to a text-embedding sequence length, concatenated with it, and given as the input to the text encoder. In the inference stage, text sequences and the desired SR value are given, and the mel spectrogram with corresponding speaking speed is predicted.

where λ is a SR scaling factor. Please note that the silence regions are removed.

3.3 Disentanglement of Speaking Speed and Other Speech Attributes

We observe that multiple speech attributes are correlated when the speaking style of the speech dataset has significant variations. Figure 2 depicts the relationship between fundamental frequency (F0) and SR of our neutral and highly expressive speech datasets; the speech dataset is detailed in section 4.1. In Figure 2, in our neutral dataset, the F0 remains almost unchanged as the speaking speed changes, however, in our expressive dataset, it changes significantly. This type of correlation among speech attributes (F0 and SR in Figure 2) affects the speed control in SCTTS system.

To disentangle and control the speaking speed from other speech attributes, we adopted a GST-based style encoder [GST]. Because a GST-based style encoder learns style features in an unsupervised manner, in the SCTTS-GST system, it is expected to learn style features other than the speaking speed, which is provided as the SR value. The additional components of SCTTS-GST system are indicated by dotted lines in Figure 1. The style embedding, which is the output of the GST-based style encoder, is concatenated with the text encoder output and projected through a linear layer. The other processes and loss function are the same as those of the basic SCTTS system.

We experimentally evaluated the following three aspects of the SCTTS system: 1) controlling the speaking speed, 2) disentangling the speaking speed from other speech attributes using GSTs, and 3) achieving naturalness of the synthesized speech with various speeds. Audio samples can be found online111 https://nc-ai.github.io/speech/publications/speed-controllable-tts.

For the experiments, we used two Korean speech datasets; one neutral and one highly expressive. The neutral speech dataset, KSS Dataset [KSSdataset], was recorded by a professional female voice actress. The total amount of speech is about 8.7 h. The expressive speech dataset, an internal dataset, was recorded by a professional male voice actor. This dataset consists of speech samples with various expressions (neutral, excited, shouting, sigh, etc). The total amount of speech is 11 h. Both datasets were recorded in a studio environment and the frequency sampling rate is 22050 Hz. For testing, 1% of each dataset was randomly selected. We used phoneme as text input and the mel spectrogram with 80 bins computed with an FFT size of 1024, a hop size of 256, and a window size of 1024, as an acoustic feature.

The architectures of the text encoder, audio encoder, and audio decoder were the same as in [DCTTS]. The architecture of PostNet was the same as that of the SSRN in [DCTTS], but the output frequency bin was set to 80 because the PostNet predicts mel spectrogram. The SR scaling factor, λ, was set as 100. The loss weight, α, was set as 1 before 50 k training steps; it decreased linearly and became 0 at the 200 k step. We did not use the guided attention loss in [DCTTS] because the system was trained stably and fast even without the guided attention loss. The Adam optimizer [ADAM] was used to optimize the network with an initial learning rate of 0.001. For the GST-based style encoder, the same network architecture with ten style tokens and a multi-head attention module with four heads as in [GST] were used. For a neural vocoder, WaveGlow [waveglow] was used, and it was trained using a database containing approximately 50 h of speech recorded by four speakers.

Figure 3 shows synthesized speech samples with various speaking speeds generated by the SCTTS system trained with the neutral speech dataset. We controlled the speed by adjusting the SR value. The average SR value representing the normal speed was obtained from the training set. As shown in Figure 3, the SCTTS system naturally controlled the speaking speed while almost maintaining other speech attributes such as pitch, without distortions such as trembling or break in the mel spectrogram.

4.4 Disentanglement of Speaking Speed and Other Speech Attributes

In this part, we evaluated the proposed system in the aspect of disentanglement between speaking speed and other speech attributes. Figure 4 shows examples of the speech samples with various speeds synthesized by the SCTTS and the SCTTS-GST systems. Both systems were trained using the expressive speech dataset. For the SCTTS-GST system, we used two different reference speech, one with normal style (non-expressive; average F0) and the other with excited style (high F0). As shown in Figure 4, in the mel spectrograms of the synthesized speech from the SCTTS-GST system with normal and excited reference speech, F0 remains unchanged with changes in the speaking speed, whereas the SCTTS system, F0 is changed depending on the speaking speed.

Figure 5 illustrates the average F0 of the synthesized speech according to the SR values. For the test set, we synthesized speech samples for the same text by changing the SR value. As shown in Figure 5, in the SCTTS, the F0 was changed significantly according to the SR value. However, in the SCTTS-GST, the F0 was almost maintained regardless of the SR value (SCTTS-GST (N)) or changed much less (SCTTS-GST (H)) than the SCTTS. Because the speaking speed and high-F0 are more strongly correlated in the training dataset (Figure 2).

4.5 Naturalness of the Speed-Controlled Speech

We evaluated the naturalness of the proposed system and compared it with phoneme-level speech duration control TTS systems. We compared the SCTTS and the SCTTS-GST systems with the phonemic-level duration controllable TTS (PDC-TTS) system [kiast-duration] and the FastSpeech [fastspeech]. Please note that the same WaveGlow neural vocoder [waveglow] was used in all the systems for high-quality speech generation.

We used the open source implementation in the ESPnet framework

[espnet] for training transformer TTS [transformer-TTS] and FastSpeech. The pre-trained transformer based TTS model was used to extract the ground-truth phoneme duration information.

This paper proposed a speed-controllable TTS system that can generate a speech with various speaking speeds without any pre-trained model and can be trained in an end-to-end manner. We also proposed that our SCTTS system can collaborate with the GST and disentangle the speaking speed from other speech attributes such as pitch. Our SCTTS system outperformed the existing phoneme duration-control TTS systems in MOS listening tests, especially when the speed of a synthesized speech was slow.