Speech recognition in cocktail-party environments remains a significant challenge for state-of-the-art speech recognition systems, as it is extremely difficult to extract an acoustic signal of an individual speaker from a background of overlapping speech with similar frequency and temporal characteristics. We propose the use of speaker-targeted acoustic and audio-visual models for this task. We complement the acoustic features in a hybrid DNN-HMM model with information of the target speaker's identity as well as visual features from the mouth region of the target speaker. Experimentation was performed using simulated cocktail-party data generated from the GRID audio-visual corpus by overlapping two speakers's speech on a single acoustic channel. Our audio-only baseline achieved a WER of 26.3 model improved the WER to 4.4 even more pronounced effect, improving the WER to 3.6 approaches, however, did not significantly improve performance further. Our work demonstrates that speaker-targeted models can significantly improve the speech recognition in cocktail party environments. 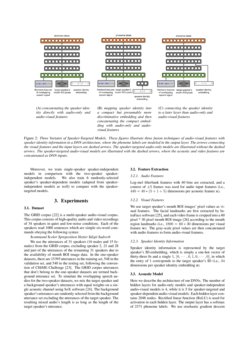 Automatic Speech Recognition (ASR) in cocktail-party environments aims to recognize the speech of an individual speaker from a background containing many concurrent voices, and has attracted researchers for decades [1, 2]. Current ASR systems can decode clear speech well in relatively noiseless environments. However, in a cocktail-party environment, their performance is severely degraded in the presence of loud noise or interfering speech signals, especially when the acoustic signal of the speaker of interest and the background share similar frequency and temporal characteristics [3]. Some previous approaches to this problem can be: multimodal robust features and blind signal separation, or a hybrid of both.

In ASR systems, it is common to adapt a well-trained, general acoustic model to new users or environmental conditions. [4]

as input features to a deep neural network (DNN) along with acoustic features.

[5] extended [4] by factorizing i-vectors to represent speaker as well as acoustic environment. [6]

Inspired by humans’ ability to use other sensory information like visual cues and knowledge about the environment to recognize speech, research in audio-visual ASR has also demonstrated the advantage of using audio-visual features over audio-only features in robust speech recognition. The McGurk effect was introduced in [12], which illustrates that visual information can affect human’s interpretation of audio signals. In [1], low dimensional lip movement vectors, eigenlips, were used to complement acoustic features for ASR. In [13]

, generalized versions of HMMs, factorial HMM and the coupled HMM, were used to fuse auditory and visual information, in which the HMM parameters were able to be trained with dynamic Bayesian networks. In

[14], the authors proposed a DNN-based approach to learning multimodal features and a shared representation between modalities. In [15]

, the authors presented a deep neural network that used a bilinear softmax layer to account for class specific correlations between modalities. In

proposed an active appearance model-based approach to extracting visual features of jaw and lip ROI on four image streams which were then combined with acoustic features for in-car audio-visual ASR. Traditional cocktail-party ASR methods suggest performing blind signal separation prior to auditory speech recognition of individual signals. Blind signal separation aims at estimating multiple unknown sources from the sensor signals. When there is only a single-channel signal available, source separation on the cocktail-party problem becomes even more difficult

[18]. A main assumption in the signal separation is that speech signals from different sources are statistically independent [3]

. Another common assumption of signal separation is that all the sources have zero-mean and unit variance for the convenience of performing Independent Component Analysis

[19, 20]. However, these two assumptions are not always correct in practice. Therefore, we try to lift these assumptions by directly recognizing single-channel signals of overlapping speech in this work.

In this paper, we propose a speaker-targeted audio-visual ASR model of multi-speaker acoustic input signals in cocktail-party environments without the use of blind signal separation. With the term speaker-targeted model, we refer to a speaker-independent model with speaker identity information input. We complement the acoustic features with information of the target speaker’s identity in embeddings similar to i-vectors in [4], along with raw pixels of the target speaker’s mouth ROI images, to supply multimodal input features to a hybrid DNN-HMM for speech recognition in cocktail-party environments.

In this work, we focus on the cocktail-party problem with overlapping speech from two speakers. We approach this problem using DNN acoustic models with different combinations of additional modalities: visual features and speaker identity information. The acoustic features are filterbank features extracted from the audio signals where two speakers’ speech is mixed on a single acoustic channel. The visual features are raw pixel values of the mouth ROI images of the target speaker whose speech the system is expected to recognize. The speaker identity information is represented by the target speaker’s ID-embedding. Details about feature extraction are described in the Experiments section.

DNN acoustic models have been widely and successfully used in ASR [21]. Let x

be a window of acoustic frames (i.e., context of filterbanks), the standard DNN acoustic models model the posterior probability:

where y is a phoneme label or alignment (i.e., from GMM-HMM) and DNN is a deep neural network with softmax outputs. The DNN is typically trained to maximize the log probability of the phoneme alignment or minimize the cross-entropy error. However, this optimization problem is difficult when x=x1+x2 is a superposition of two signals x1 and x2 (i.e., cocktail party).

In this work, we extend the previous traditional DNN acoustic models to leverage additional information in order to model our phonemes. By leveraging combinations of the visual features and speaker identity information, the standard DNN acoustic model is extended to have multimodal inputs.

First, we leverage the visual information in conjunction with the acoustic features. The standard DNN acoustic model:

Secondly, we try to leverage the speaker identity information to extend the previous models, DNNA and DNNAV. DNNA is extended to:

and DNNAV is extended to:

The three fusion techniques introduce the three variants (A), (B) and (C) of both the speaker-targeted models DNNAI and DNNAVI. The speaker-targeted models of the three invariants are shown in Figure 2, where the figures without the dashed arrow represent the audio-only models, and the figures with the dashed arrow represent the audio-visual models.

The GRID corpus [22] is a multi-speaker audio-visual corpus. This corpus consists of high-quality audio and video recordings of 34 speakers in quiet and low-noise conditions. Each of the speakers read 1000 sentences which are simple six-word commands obeying the following syntax:

Log-mel filterbank features with 40 bins are extracted, and a context of ±5 frames was used for audio input features (i.e., 440=40∗(5+1+5) dimensions per acoustic feature x).

Here we describe the architecture of our DNNs. The number of hidden layers for audio-only models and speaker-independent audio-visual models is 4, while it is 5 for speaker-targeted and speaker-dependent audio-visual models. Each hidden layer contains 2048 nodes. Rectified linear function (ReLU) is used for activation in each hidden layer. The output layer has a softmax of 2371 phoneme labels. We use stochastic gradient descent with a batch size of 128 frames and a learning rate of 0.01.

A speaker-targeted audio-visual DNN-HMM model for speech recognition in cocktail-party environments is proposed in this work. Different combinations of acoustic and visual features and speaker identity information as DNN inputs are presented. Experimental results suggest that the audio-visual model achieves significant improvement over the audio-only model. Introducing speaker identity information introduces an even more pronounced improvement. Combining both approaches, however, does not significantly improve performance further.

Future work will aim to investigate better representations in multimodal data space to incorporate audio, visual and speaker identity information with the objective to improve the speech recognition performance in cocktail-party environments. More complex architectures can be explored such as CNNs for modeling image structures and recurrent neural networks (RNNs) and Long-Short Term Memory (LSTM) models for modeling variable time-sequence inputs in order to achieve a better unified optimization for the speaker-targeted audio-visual models.

We would like to thank Niv Zehngut for preparing the image dataset, Srikanth Kallakuri for technical support, Benjamin Elizalde and Akshay Chandrashekaran for proofreading and suggestions.