Language understanding (LU) and dialogue policy learning are two essential components in conversational systems. Human-human dialogues are not well-controlled and often random and unpredictable due to their own goals and speaking habits. This paper proposes a role-based contextual model to consider different speaker roles independently based on the various speaking patterns in the multi-turn dialogues. The experiments on the benchmark dataset show that the proposed role-based model successfully learns role-specific behavioral patterns for contextual encoding and then significantly improves language understanding and dialogue policy learning tasks. 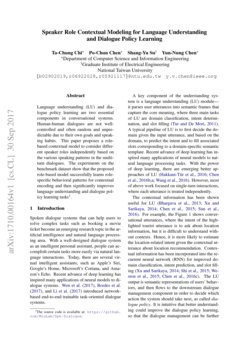 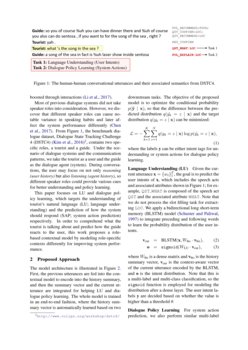 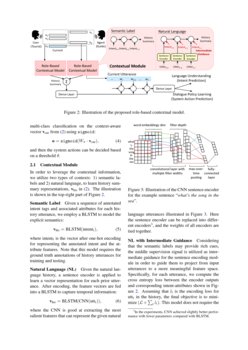 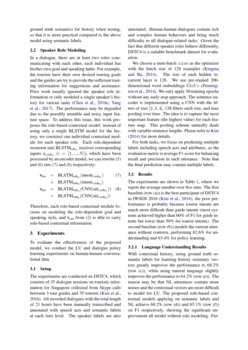 A key component of the understanding system is a language understanding (LU) module—it parses user utterances into semantic frames that capture the core meaning, where three main tasks of LU are domain classification, intent determination, and slot filling Tur and De Mori (2011). A typical pipeline of LU is to first decide the domain given the input utterance, and based on the domain, to predict the intent and to fill associated slots corresponding to a domain-specific semantic template. Recent advance of deep learning has inspired many applications of neural models to natural language processing tasks. With the power of deep learning, there are emerging better approaches of LU Hakkani-Tür et al. (2016); Chen et al. (2016b, a); Wang et al. (2016). However, most of above work focused on single-turn interactions, where each utterance is treated independently.

shows conversational utterances, where the intent of the highlighted tourist utterance is to ask about location information, but it is difficult to understand without contexts. Hence, it is more likely to estimate the location-related intent given the contextual utterance about location recommendation. Contextual information has been incorporated into the recurrent neural network (RNN) for improved domain classification, intent prediction, and slot filling

Most of previous dialogue systems did not take speaker roles into consideration. However, we discover that different speaker roles can cause notable variance in speaking habits and later affect the system performance differently

Chen et al. (2017). From Figure 1, the benchmark dialogue dataset, Dialogue State Tracking Challenge 4 (DSTC4) Kim et al. (2016)222http://www.colips.org/workshop/dstc4/, contains two specific roles, a tourist and a guide. Under the scenario of dialogue systems and the communication patterns, we take the tourist as a user and the guide as the dialogue agent (system). During conversations, the user may focus on not only reasoning (user history) but also listening (agent history), so different speaker roles could provide various cues for better understanding and policy learning.

This paper focuses on LU and dialogue policy learning, which targets the understanding of tourist’s natural language (LU; language understanding) and the prediction of how the system should respond (SAP; system action prediction) respectively. In order to comprehend what the tourist is talking about and predict how the guide reacts to the user, this work proposes a role-based contextual model by modeling role-specific contexts differently for improving system performance.

The model architecture is illustrated in Figure 2

. First, the previous utterances are fed into the contextual model to encode into the history summary, and then the summary vector and the current utterance are integrated for helping LU and dialogue policy learning. The whole model is trained in an end-to-end fashion, where the history summary vector is automatically learned based on two downstream tasks. The objective of the proposed model is to optimize the conditional probability

where the labels y can be either intent tags for understanding or system actions for dialogue policy learning.

to integrate preceding and following words to learn the probability distribution of the user intents.

where Whis is a dense matrix and vhis is the history summary vector, vcur is the context-aware vector of the current utterance encoded by the BLSTM, and o is the intent distribution. Note that this is a multi-label and multi-class classification, so the sigmoid function is employed for modeling the distribution after a dense layer. The user intent labels y are decided based on whether the value is higher than a threshold θ.

and then the system actions can be decided based on a threshold θ.

In order to leverage the contextual information, we utilize two types of contexts: 1) semantic labels and 2) natural language, to learn history summary representations, vhis in (2). The illustration is shown in the top-right part of Figure 2.

Given a sequence of annotated intent tags and associated attributes for each history utterance, we employ a BLSTM to model the explicit semantics:

is the vector after one-hot encoding for representing the annotated intent and the attribute features. Note that this model requires the ground truth annotations of history utterances for training and testing.

Given the natural language history, a sentence encoder is applied to learn a vector representation for each prior utterance. After encoding, the feature vectors are fed into a BLSTM to capture temporal information:

where the CNN is good at extracting the most salient features that can represent the given natural language utterances illustrated in Figure 3. Here the sentence encoder can be replaced into different encoders333In the experiments, CNN achieved slightly better performance with fewer parameters compared with BLSTM., and the weights of all encoders are tied together.

Considering that the semantic labels may provide rich cues, the middle supervision signal is utilized as intermediate guidance for the sentence encoding module in order to guide them to project from input utterances to a more meaningful feature space. Specifically, for each utterance, we compute the cross entropy loss between the encoder outputs and corresponding intent-attributes shown in Figure 2. Assuming that lt is the encoding loss for uttt in the history, the final objective is to minimize (L+∑tlt). This model does not require the ground truth semantics for history when testing, so that it is more practical compared to the above model using semantic labels.

In a dialogue, there are at least two roles communicating with each other, each individual has his/her own goal and speaking habit. For example, the tourists have their own desired touring goals and the guides are try to provide the sufficient touring information for suggestions and assistance. Prior work usually ignored the speaker role information or only modeled a single speaker’s history for various tasks Chen et al. (2016c); Yang et al. (2017). The performance may be degraded due to the possibly unstable and noisy input feature space. To address this issue, this work proposes the role-based contextual model: instead of using only a single BLSTM model for the history, we construct one individual contextual module for each speaker role. Each role-dependent recurrent unit BLSTMrolex receives corresponding inputs xi,rolex (i=[1,...,N]), which have been processed by an encoder model, we can rewrite (5) and (6) into (2.2) and (2.2) respectively:

To evaluate the effectiveness of the proposed model, we conduct the LU and dialogue policy learning experiments on human-human conversational data.

The experiments are conducted on DSTC4, which consists of 35 dialogue sessions on touristic information for Singapore collected from Skype calls between 3 tour guides and 35 tourists Kim et al. (2016). All recorded dialogues with the total length of 21 hours have been manually transcribed and annotated with speech acts and semantic labels at each turn level. The speaker labels are also annotated. Human-human dialogues contain rich and complex human behaviors and bring much difficulty to all dialogue-related tasks. Given the fact that different speaker roles behave differently, DSTC4 is a suitable benchmark dataset for evaluation.

We choose a mini-batch adam as the optimizer with the batch size of 128 examples Kingma and Ba (2014). The size of each hidden recurrent layer is 128. We use pre-trained 200-dimensional word embeddings GloVe Pennington et al. (2014)

. We only apply 30 training epochs without any early stop approach. The sentence encoder is implemented using a CNN with the filters of size

, 128 filters each size, and max pooling over time. The idea is to capture the most important feature (the highest value) for each feature map. This pooling scheme naturally deals with variable sentence lengths. Please refer to kim2014convolutional for more details.

For both tasks, we focus on predicting multiple labels including speech acts and attributes, so the evaluation metric is average F1 score for balancing recall and precision in each utterance. Note that the final prediction may contain multiple labels.

The experiments are shown in Table 1, where we report the average number over five runs. The first baseline (row (a)) is the best participant of DSTC4 in IWSDS 2016 Kim et al. (2016), the poor performance is probably because tourist intents are much more difficult than guide intents (most systems achieved higher than 60% of F1 for guide intents but lower than 50% for tourist intents). The second baseline (row (b)) models the current utterance without contexts, performing 62.6% for understanding and 63.4% for policy learning.

To predict the guide’s next actions, the baseline utilizes intent tags of the current utterance without contexts (row (b)). Table 1 shows the similar trend as LU results, where applying either role-based contextual models or intermediate guidance brings advantages for both semantics-encoded and NL-encoded history.

In contrast to NL, semantic labels (intent-attribute pairs) can be seen as more explicit and concise information for modeling the history, which indeed gains more in our experiments for both LU and dialogue policy learning. The results of Contextual-Sem can be treated as the upper bound performance, because they utilizes the ground truth semantics of contexts. Among the experiments of Contextual-NL, which are more practical because the annotated semantics are not required during testing, the proposed approaches achieve 5.1% and 6.3% relative improvement compared to the baseline for LU and dialogue policy learning respectively.

Between LU and dialogue policy learning tasks, most LU results are worse than dialogue policy learning results. The reason probably is that the guide has similar behavior patterns such as providing information and confirming questions etc., while the user can have more diverse interactions. Therefore, understanding the user intents is slightly harder than predicting the guide policy in the DSTC4 dataset.

With the promising improvement for both LU and dialogue policy learning, the idea about modeling speaker role information can be further extended to various research topics in the future.

We would like to thank reviewers for their insightful comments on the paper. The authors are supported by the Ministry of Science and Technology of Taiwan and MediaTek Inc..