Dysarthric speech reconstruction (DSR), which aims to improve the quality of dysarthric speech, remains a challenge, not only because we need to restore the speech to be normal, but also must preserve the speaker's identity. The speaker representation extracted by the speaker encoder (SE) optimized for speaker verification has been explored to control the speaker identity. However, the SE may not be able to fully capture the characteristics of dysarthric speakers that are previously unseen. To address this research problem, we propose a novel multi-task learning strategy, i.e., adversarial speaker adaptation (ASA). The primary task of ASA fine-tunes the SE with the speech of the target dysarthric speaker to effectively capture identity-related information, and the secondary task applies adversarial training to avoid the incorporation of abnormal speaking patterns into the reconstructed speech, by regularizing the distribution of reconstructed speech to be close to that of reference speech with high quality. Experiments show that the proposed approach can achieve enhanced speaker similarity and comparable speech naturalness with a strong baseline approach. Compared with dysarthric speech, the reconstructed speech achieves 22.3 moderate and moderate-severe dysarthria respectively. Our demo page is released here: https://wendison.github.io/ASA-DSR-demo/ 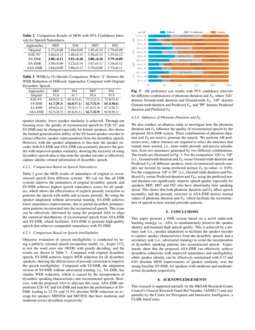 In this paper, we explore the possibility of speech synthesis from low q...
Sunghee Jung, et al. ∙

Dysarthria arises from various neurological disorders including Parkinson’s disease or amyotrophic lateral sclerosis, leading to weak regulation of articulators such as jaw, tongue, and lips [36]. Therefore, the resulting dysarthric speech may be perceived as harsh or breathy with abnormal prosody and inaccurate pronunciation, which degrades the efficiency of vocal communication for dysarthric patients. Attempts have been made to improve the quality of dysarthric speech by using various reconstruction approaches, where voice conversion (VC) serves as a promising candidate [34].

The goal of VC is to convert non-linguistic or para-linguistic factors such as speaker identity [23], prosody [27], emotion [2] and accent [20]. VC has also been widely applied in reconstructing different kinds of impaired speech including esophageal speech [10, 29], electrolaryngeal speech [25, 17], hearing-impaired speech [5] and dysarthric speech [34], where rule-based and statistical VC approaches have been investigated for dysarthric speech reconstruction (DSR). Rule-based VC tends to apply manually designed, speaker-dependent rules to correct phoneme errors or modify temporal and frequency features to improve intelligibility [28, 18]

[33, 11, 7] and gated convolutional networks [6]. Though significant progress has been made, previous work generally ignores speaker identity preservation, which loses the ability for patients to demonstrate their personality via acoustic characteristics. Preserving the identities for dysarthric speakers is very challenging since their normal speech utterances are difficult to collect. A few studies [12, 32] use a speaker representation to control the speaker identity of reconstructed speech, where the speaker encoder (SE) proposed in our previous work [32] is trained on a speaker verification (SV) task by using large-scale normal speech. However, the SE may fail to effectively extract speaker representations from previously unseen dysarthric speech, which lowers the speaker similarity of reconstructed speech.

This paper proposes an improved DSR system based on [32] by using adversarial speaker adaptation (ASA). The DSR system in [32] contains four modules: (1) A speech encoder extracting accurate phoneme embeddings from dysarthric speech to restore the linguistic content; (2) A prosody corrector inferring normal prosody features that are treated as canonical values for correction; (3) A speaker encoder

producing a single vector as speaker representation used to preserve the speaker identity; and (4) A

The main contribution of this paper is the use of proposed ASA approach to effectively preserve speaker identities of dysarthric patients after the reconstruction, without using patients’ normal speech that is nearly impossible to collect. It is noted that our work is different from [22] that aims to achieve robust speech recognition, as the proposed ASA here is used to obtain regularized mel-spectrograms for generating high-quality speech with enhanced speaker similarity.

are used as phoneme embeddings that denote phoneme probability distributions.

Speaker encoder: The speaker encoder, θsvs, is trained on a SV task to capture speaker characteristics. θsvs takes in mel-spectrograms m of one utterance with arbitrary length to produce a single vector as speaker representation: e=fs(m;θsvs). Following the training scheme in [20], θsvs is optimized to minimize a generalized end-to-end loss [31] by using normal speech data that is easily acquired from thousands of healthy speakers.

During the reconstruction phase, the SV-DSR system takes in the dysarthric speech of speaker sd to generate reconstructed mel-spectrograms as fg(˜p,˜v,esv;θg), where ˜p are phoneme embeddings extracted by fine-tuned speech encoder Φsd and expanded with predicted normal duration, ˜v is predicted normal pitch, and esv is the speaker representation. Then Parallel WaveGAN (PWG) [35] is adopted as the neural vocoder to transform fg(˜p,˜v,esv;θg) to speech waveform. SV-DSR is a strong baseline as it can generate the speech with high intelligibility and naturalness. However, the speaker encoder is trained on normal speech, which limits its generalization ability to previously unseen dysarthric speech. Therefore, esv cannot effectively capture identity-related information of dysarthric speakers. Our experiments found that SV-DSR may even change the gender of speech after the reconstruction.

The proposed approach of adversarial speaker adaptation (ASA), as illustrated in Fig. 2, aims to enhance speaker similarity, resulting in the proposed ASA-DSR system that shares the same modules as SV-DSR except for the speaker encoder. First, ASA-DSR is cloned from SV-DSR, then a system discriminator φ is introduced to determine whether its input mel-spectrograms are reconstructed by SV-DSR or ASA-DSR systems. Given a dysarthric speaker sd with the adaptation data set Tsd={(mk,pk,vk)}, where each element corresponds to one dysarthric utterance, pk are phoneme embeddings extracted by Φsd and expanded with dysarthric duration, vk is dysarthric pitch, their normal counterparts can be obtained via the prosody corrector as ~pk and ~vk, respectively. SV-DSR and ASA-DSR generate reconstructed mel-spectrograms as ~zsvk and ~zasak respectively:

Then speaker encoder θasas of ASA-DSR and discriminator φ are alternatively optimized with remaining networks frozen. On one hand, φ is optimized to minimize the discrimination loss Ldis:

is the posterior probability of mel-spectrograms reconstructed by SV-DSR. On the other hand,

where λ is set to 1 empirically. The primary task minimizes the adaptation loss Ladapt to force speaker encoder θasas to effectively capture speaker characteristics from the dysarthric speech, so that enhanced speaker similarity can be achieved in reconstructed mel-spectrograms ~zasak. The secondary task maximizes the discrimination loss Ldis to force ~zasak to have a similar distribution to ~zsvk that has high intelligibility and naturalness, which facilitates ~zasak to maintain normal pronunciation patterns as ~zsvk . As a result, the proposed ASA-DSR preserves the capacity of SV-DSR to reconstruct high-quality speech, while achieving improved capacity for preserving the speaker identity of the target dysarthric speaker sd.

The datasets used in our experiments contain LibriSpeech [26], VCTK [30], VoxCeleb1 [24], VoxCeleb2 [9], LJSpeech [13] and UASPEECH [15]. Speech encoder Φp is pre-trained by 960h training data of LibriSpeech, prosody corrector is trained by the data of a healthy female speaker from LJSpeech, speaker encoder θsvs is trained by Librispeech, VoxCeleb1 and VoxCeleb2 with around 8.5K healthy speakers, speech generator θg

and PWG vocoder are trained by VCTK. For dysarthric speech, two male speakers (M05, M07) and two female speakers (F04, F02) are selected from UASPEECH, where M05/F04 and M07/F02 have moderate and moderate-severe dysarthria respectively. We use the speech data of blocks 1 and 3 of each dysarthric speaker for fine-tuning speech encoder and ASA, and block 2 for testing. The inputs of speech encoder are 40-dim mel-spectrograms appended with deltas and delta-deltas which results in 120-dim vectors, the targets of speech generator are 80-dim mel-spectrograms, all mel-spectrogtams are computed with 400-point Fourier transform, 25ms Hanning window and 10ms hop length.

F0 is extracted by the Pyworld toolkit222https://github.com/JeremyCCHsu/Python-Wrapper-for-World-Vocoder with the 10ms hop length. To stabilize the training and inference of F0 predictor, we adopt the logarithmic scale of F0

. All acoustic features are normalized to have zero mean and unit variance.

The speech encoder, prosody corrector, speaker encoder and speech generator adopt the same architectures as in [32], where the speaker encoder contains 3-layer 256-dim LSTM followed by one fully-connected layer to obtain the 256-dim vector that is L2-normalized as the speaker representation [20]. The pre-training and fine-tuning of speech encoder are performed by Adadelta optimizer [37] with 1M and 2K steps respectively by using learning rate of 1 and batch size of 8. Both duration and F0 predictors are trained by Adam optimizer [16] with 30K steps by using learning rate of 1e-3 and batch size of 16, speech generator is optimized in a similar way except that the training steps are set to 50K. The training of speaker encoder by using normal speech follows the scheme in [20]. Convolution-based discriminator of StarGAN [8] is used as the system discriminator and alternatively trained with the speaker encoder during ASA for 5K steps. Four DSR systems are compared: (1) SV-DSR; (2) ASA-DSR; (3) SA-DSR, which is an ablation system that performs speaker adaptation similar with ASA-DSR but without adversarial training; and (4) E2E-VC [33], which is an end-to-end DSR model via cross-modal knowledge distillation, where the speaker encoder used in SV-DSR is added to control the speaker identity.

4.2.1 Comparison Based on Speaker Similarity

4.2.2 Comparison Based on Speech Naturalness

Table 2 gives the MOS results of naturalness of original or reconstructed speech from different systems. We can see that all DSR systems improve the naturalness of original dysarthric speech, and SV-DSR achieves highest speech naturalness scores for all speakers, which shows the effectiveness of explicit prosody correction to generate the speech with stable and accurate prosody. By using the speaker adaptation without adversarial training, SA-DSR achieves lower naturalness improvements, due to partial dysarthric pronunciation patterns incorporated into the reconstructed speech. This issue can be effectively alleviated by using the proposed ASA to align the statistical distributions of reconstructed speech from ASA-DSR and SV-DSR, which facilitates ASA-DSR to generate high-quality speech that achieves comparable naturalness with SV-DSR.

4.2.3 Comparison Based on Speech Intelligibility

Objective evaluation of speech intelligibility is conducted by using a publicly released speech recognition model, i.e., Jasper [19], to test the word error rate (WER) with greedy decoding, and the results are shown in Table 3. Compared with original dysarthric speech, SV-DSR achieves largest WER reduction for all dysarthric speakers, showing the effectiveness of prosody correction to improve the speech intelligibility. Compared with SV-DSR, the adaptation version of SV-DSR without adversarial training, i.e., SA-DSR, has smaller WER reduction, which is caused by the incorporation of dysarthric speaking characteristics into reconstructed speech. However, with the proposed ASA to alleviate this issue, ASA-DSR outperforms E2E-VC and SA-DSR and matches the performance of SV-DSR, leading to 22.3% and 31.5% absolute WER reduction on average for speakers M05/F04 and M07/F02 that have moderate and moderate-severe dysarthria respectively.

4.2.4 Influence of Phoneme Duration and F0

This paper presents a DSR system based on a novel multi-task learning strategy, i.e., ASA, to simultaneously preserve the speaker identity and maintain high speech quality. This is achieved by a primary task (i.e., speaker adaptation) to facilitate the speaker encoder to capture speaker characteristics from the dysarthric speech, and a secondary task (i.e., adversarial training) to avoid the incorporation of dysarthric speaking patterns into reconstructed speech. Experiments show that the proposed ASA-DSR can effectively achieve dysarthria reductions with improved naturalness and intelligibility, while speaker identity can be effectively maintained with 0.73 and 0.85 absolute MOS improvements of speaker similarity over the strong baseline SV-DSR, for speakers with moderate and moderate-severe dysarthria respectively.

This research is supported partially by the HKSAR Research Grants Council’s General Research Fund (Ref Number 14208817) and also partially by the Centre for Perceptual and Interactive Intelligence, a CUHK InnoCentre.