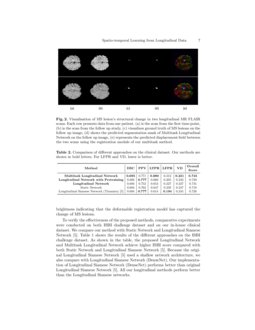 Multiple Sclerosis (MS) is a neurological disease characterized by damage to myelinated nerve sheaths (demyelination) and is a potentially disabling disease of the central nervous system. The affected regions appear as focal lesions in the white matter [18] and Magnetic Resonance Imaging (MRI) is used to visualize and detect the lesions [8]. MS is a chronic disease, therefore longitudinal MRI patient studies are conducted to monitor the progression of the disease. Accurate lesion segmentation in the MRI scans is important to quantitatively assess response to treatment [17] and future disease-related disability progression [19]. However, manual segmentation of MS lesions in MRI volumes is time-consuming, prone to errors and intra/inter-observer variability [6].

introduced an asymmetric loss, similar to the Tversky index, which is supposed to tackle the problem of high class imbalance in MS lesion segmentation by achieving a better trade-off between precision and recall. Whereas the previous two approaches worked with 3D input, Aslani et al.

[2] proposed a 2.5D slice-based multimodality approach, where they use a single branch for each modality. They trained their network with slices from all plane orientations (axial, coronal, sagittal). During inference, they merge those 2D binary predictions to a single lesion segmentation volume by applying a majority vote. Zhang et al. [21] also proposed a 2.5D slice-based approach, but they concatenated all modalities instead of processing them in multiple branches. In contrast, they utilize a separate model for each plane orientation.

However, none of these works use the data from multiple time-points. The work of Birenbaum et al. [5] is the only method that processes longitudinal data. Birenbaum et al. [5] proposed a siamese architecture, where input patches from two time-points are given to separate encoders that share weights and subsequently the encoders’ outputs are concatenated and fed into subsequent CNN to predict the class of pixel of interest. Birenbaum et al. [5] sets the direction for using longitudinal data and opens up a line of opportunities for future work. However, their work does not extensively investigate the potential of using information from longitudinal data. Specifically, their proposed late-fusion of features does not properly take advantage of learning from structural changes.

In this paper, we propose two approaches complementary to each other, that use spatio-temporal information available in longitudinal MR scans to improve the segmentation of MS lesions. Our intuition is that the structural changes of MS lesions through time are valuable cues for the model to detect these lesions. The first approach, which serves as our baseline longitudinal method concatenates the multimodal inputs from two time-points and the result is given to the network as input. The early fusion of inputs, as opposed to late fusion proposed by Birenbaum et al. [5], allows for proper capturing of the differences between inputs from two time-points in the encoder. The second approach is complementary to our baseline longitudinal architecture and further enforces the use of structural changes through time. We propose a multitask learning framework by adding an auxiliary deformable registration task to the segmentation model. The two tasks share the same encoder, but two separate decoders are assigned for each task. We evaluate our approaches on two longitudinal multimodal MS lesion datasets: An in-house dataset including 70 patients with one follow-up study for each patient, and the publicly available ISBI longitudinal MS lesion segmentation challenge dataset [6] which includes 19 patients (5 train and 14 test), each with three to five follow-up studies.

This section describes our approaches for incorporating spatio-temporal features into the learning pipeline of a neural networks. Our intuition is to use the structural changes of MS lesions between the longitudinal scans for detecting these lesions. Note that the aim is not to model how the lesions deform or change, but to find what has changed and to use that information to improve segmentation. To this aim, we propose two complementary approaches that allow the use of structural change information to improve segmentation.

We adopt a 2.5D approach [16, 2] for segmentation of 3D MR volumes, where for each voxel, segmentation is done on the three orthogonal slices crossing the voxel of interest. The prediction from the corresponding pixel in each view is combined via majority voting to determine the final prediction for the voxel. To segment a given slice, we use a fully convolutional and densely connected neural network (Tiramisu) [12]. The network receives a slice from any of the three orthogonal views and outputs a segmentation mask. To account for different modalities (T1-w, T2-w, FLAIR, PD), we stack the corresponding slices from all modalities and feed them to the network.

In order to use the structural changes between the two time-points, we give the concatenated scans of the two-time points as input to the segmentation network (Fig. 1.a). This early-fusion of inputs allows the network filters to capture the minute structural changes at all layers leading to the bottleneck, as opposed to the late fusion of Birenbaum et al. [5], where high-level representations from each time point are concatenated. The early fusion’s effectiveness for learning structural differences can be further supported by the similar architectural approaches in the design of deformable registration networks [3, 4]. Note that the two inputs do not have to be consecutive time-points, as we are not trying to model a temporal change, but only use structural changes as cues.

The resulting network (Fig. 1.b) consists of a shared encoder followed by two decoders used to generate the specific outputs for the two tasks. One head of the network is associated with generating the segmentation mask and the other one with deformation field map. The encoder-decoder architecture here is that of Tiramisu [12] architecture, and two decoders for registration and segmentation are architecturally equivalent. The deformable registration task is trained without supervision or ground truth registration data. This is rather trained self-supervised and by reconstructing one scan from the other which helps adding additional generic information to the network. The multi task loss is defined as:

A common pitfall in multi task learning is the imbalance of different tasks which leads to under-performance of multitask learning compared to single tasks. To solve this one needs to normalize loss functions or gradients flow

[7]. Here we use the same type of loss function for both tasks. Specifically we use MSE loss, which is used for both registration and segmentation problems. We use a CNN based deformable registration methodology similar to VoxelMorph [4], but adapted to 2D inputs and using Tiramisu architecture (Fig. 1.b). The registration loss (Lreg) is defined as:

where Φ is the deformation field between inputs Xti and Xtj (ti and tj denote the time-points). Xtj∘Φ is the warping of Xtj by Φ, and Lsim is the loss imposing the similarity between Xti and warped version of Xtj. Lsmooth is regularization term to encourage Φ to be smooth. We use MSE loss for Lsim, and for the smoothness term Lsmooth, similar to [4] we use a diffusion regularizer on the spatial gradients of the displacement field.

The first dataset is the publicly available ISBI Longitudinal MS Lesion Segmentation Challenge dataset [6]. This dataset contains 3T MR images over time. The dataset consists of 5 subjects in training set and 14 subjects in test set with 3 to 5 follow-up images per subject. For each time point, T1-w MPRAGE, FLAIR, T2-weighted, and PD images were acquired. MS lesions were manually annotated by two expert raters.

The second dataset is the in-house clinical [9, 13]. The datasets consists of 1.5T and 3T MR images. Follow-up images of 70 MS patients were acquired. Images are 3D T1-w MRI scans and 3D FLAIR scans with approximately 1 mm isotropic resolution. MS lesions were manually annotated by an expert rater. Data of 40 patients were used as a training set (30 train, 10 validation). The remaining data of 30 patients were used as an independent test set.

The encoders and decoders of our architectures are based on FC-DenseNet57 [12]. We used Adam optimizer with AMSGrad [15]

and a learning rate of 1e-4. We used a single model for all plane orientations. Since our approaches are 2.5D, we applied a majority vote on the probability output predictions over all orientations. PyTorch 1.4

[14] is used for neural network implementation.

For the in-house dataset, DSC, PPV, LTPF, LFPR, VD, and volume difference (VD) are used for evaluation. Moreover, to consider the overall effect of metrics, we define an Overall Score in a similar fashion to ISBI score as follows,

In the following, we clarify the compared methods:

Static Network: Similar to Zhang et al. [21] our model is based on FC-DenseNet-57 and uses only a single time-point.

Longitudinal Siamese Network (Tiramisu): We implement the longitudinal siamese model [5] with a FC-DenseNet-57 [12]. As in [5], late fusion is used.

Our longitudinal methods are performing better on ISBI test set, however, it is noteworthy that our models outperformed others on the validation dataset with a higher margin. Multitask Longitudinal Network achieved the best performance with a DSC of 0.8163, followed by Longitudinal Network with Pretraining, Longitudinal Network and Static Model with DSCs of 0.8147, 0.8046 and 0.78430, respectively. The reason why the performance improvements on the validation set do not transfer to the test set lays in the very limited size of the train set (train and validation), which consists of only 5 patients, whereas the test set consists of 14 patients. Hence, results on a bigger dataset, such as our in-house dataset are more reliable.

To further evaluate our method on a larger clinical dataset, we compare the methods on the in-house dataset. Results for the different methods are shown Table 2, which indicates that Multitask Longitudinal Network outperforms other models, owing it to the explicit modeling of spatio-temporal features in the network’s architecture. In section 2.1 we stated that the early-fusion of inputs, allows the network to capture the structural differences between the inputs better than late-fusion. The comparison between our Longitudinal Network and Longitudinal Siamese Network (Tiramisu) which only differ in how they fuse the inputs, serves as an ablation experiment for our claim that early-fusion performs better.