Deep neural networks have made remarkable progresses on various computer vision tasks. Recent works have shown that depth, width and shortcut connections of networks are all vital to their performances. In this paper, we introduce a method to sparsify DenseNet which can reduce connections of a L-layer DenseNet from O(L^2) to O(L), and thus we can simultaneously increase depth, width and connections of neural networks in a more parameter-efficient and computation-efficient way. Moreover, an attention module is introduced to further boost our network's performance. We denote our network as SparseNet. We evaluate SparseNet on datasets of CIFAR(including CIFAR10 and CIFAR100) and SVHN. Experiments show that SparseNet can obtain improvements over the state-of-the-art on CIFAR10 and SVHN. Furthermore, while achieving comparable performances as DenseNet on these datasets, SparseNet is x2.6 smaller and x3.7 faster than the original DenseNet. 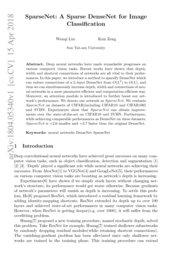 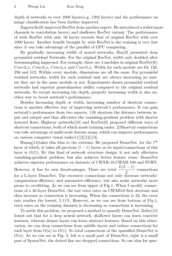 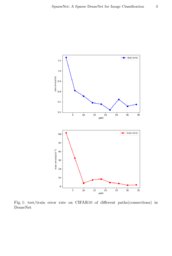 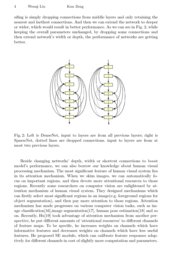 An Improving Framework of regularization for Network Compression

Deep convolutional neural networks have achieved great successes on many computer vision tasks, such as object classification, detection and segmentation

[1] [2] [3]. ‘Depth’ played a significant role while neural networks are achieving their successes. From AlexNet[1] to VGGNet[4] and GoogLeNet[5], their performances on various computer vision tasks are boosting as network’s depth is increasing.

Experiments[6] have shown if we simply stack layers without changing network’s structure, its performance would get worse otherwise. Because gradients of network’s parameters will vanish as depth is increasing. To settle this problem, He[6] proposed ResNet, which introduced a residual learning framework by adding identity-mapping shortcuts. ResNet extended its depth up to over 100 layers and achieved state-of-art performances in many computer vision tasks. However, when ResNet is getting deeper(e.g. over 1000), it will suffer from the overfitting problem.

trained shallower subnetworks by randomly dropping residual modules(while retaining shortcut connections). The vanishing-gradient problem has been alleviated since only shallower networks are trained in the training phase. This training procedure can extend depth of networks to over 1000 layers(e.g. 1202 layers) and the performance on image classification has been further improved.

Zagoruyko[8] improved ResNet from another aspect. He introduced a wider(more channels in convolution layers) and shallower ResNet variant. The performance of wide ResNet with only 16 layers exceeds that of original ResNet with over 1000 layers. Another benefit brought by wide ResNet is the training is very fast since it can take advantage of the parallel of GPU computing.

Huang[14]takes this idea to the extreme. He proposed DenseNet, for the lth layer of which, it takes all previous (l−1) layers as its input(connections of this layer is O(l)). By this kind of network structure design, it not only alleviates vanishing-gradient problem, but also achieves better feature reuse. DenseNet achieves superior performance on datasets of CIFAR-10,CIFAR-100 and SVHN. However, it has its own disadvantages. There are total L(L−1)2 connections for a L-layer DenseNet. The excessive connections not only decrease networks’ computation-efficiency and parameter-efficiency, but also make networks more prone to overfitting. As we can see from upper of Fig.1, When I modify connections of a 40-layer DenseNet, the test error rates on CIFAR10 first decrease and then increase as connection is increasing. When the connections is 22, the error rate reaches the lowest, 5.11%. However, as we can see from bottom of Fig.1, error rates on the training datasets is decreasing as connections is increasing.

To settle this problem, we proposed a method to sparsify DenseNet. Zeiler[15] found out that for a deep neural network, shallower layers can learn concrete features, whereas deeper layers can learn abstract features. Based on this observation, we can drop connections from middle layers and reduce connections for each layer from O(n) to O(1). So total connections of the sparsified DenseNet is O(n). As we can see in Fig. 2, left is a small part of DenseNet, right is a small part of SparseNet. the dotted line are dropped connections. So our idea for sparsifing is simply dropping connections from middle layers and only retaining the nearest and farthest connections. And then we can extend the network to deeper or wider, which would result in better performance. As we can see in Fig. 2, while keeping the overall parameters unchanged, by dropping some connections and then extend network’s width or depth, the performance of networks are getting better.

Beside changing networks’ depth, width or shortcut connections to boost model’s performance, we can also borrow our knowledge about human visual processing mechanism. The most significant feature of human visual system lies in its attention mechanism. When we skim images, we can automatically focus on important regions, and then devote more attentional resources to those regions. Recently some researchers on computer vision are enlightened by attention mechanism of human visual system. They designed mechanisms which can firstly select most significant regions in an image(e.g. foreground regions for object segmentation), and then pay more attention to those regions. Attention mechanism has made progresses on various computer vision tasks, such as image classification[16],image segmentation[17]

[18] and so on. Recently, Hu[19] took advantage of attention mechanism from another perspective, he put different amounts of ‘attentional resources’ to different channels of feature maps. To be specific, he increases weights on channels which have informative features and decreases weights on channels which have less useful features. He proposed SE module, which can calibrate feature responses adaptively for different channels in cost of slightly more computation and parameters. The SE module has been proved to be effective for ResNet[6],Inception[5] and Inception_ResNet[20]

There are two contributions in our paper:

1) We present an effective way to sparsify DenseNet, which can improve network’s performance by simultaneously increasing depth, width and shortcut connections of networks. Besides,

2) we also proposed an attention mechanism, which can further boost network’s performance.

Since 2012, neural networks, as a new way of constructing models, have made big steps in various computer vision regions. AlexNet[1]

, which consists of 8 layers, won the image classification championship of ILSVRC-2012. It reduced error rate on ImageNet dataset from

25.8%(best performance in 2011) to 16.4%. In 2014, when VGGNet[4] and Inception Net[21] were introduced, depth of networks had been easily extended to 20 layers and the accuracy of image classification also improved a lot. As network goes deeper, simply stacking layers would degrade its performance. To solve the problem, He[6] introduced ResNet, which learns Residual function H(x)−x,instead of target function H(x) directly. ResNet can be extended to over 100 layers and the performance can be further improved.

Many researches have been made on ResNet variants. He[22] changed the conventional ”post-activation” of the weight layers to ”pre-activation”. To be specific, he put BN layer and ReLU layer before Conv layer. As the result turned out, this identity-mapping change made training easier and thus the performance of networks better. Han[9] introduced Deep Pyramidal Residual Networks, which increase width gradually layer by layer and rearrange the convolution module. Experiments showed their network architecture has superior generalization ability compared to original ResNet.

Targ[23] proposed ResNet in ResNet(RiR), which changed convolution module to a small deep dual-stream architecture. RiR makes network generalize between residual stream which is similar to a residual block and transient stream which is a standard convolutional layer. Huang[7]

constructs a very deep ResNet. By randomly dropping some residual modules with probability

p, they can train different shallower subnetworks in the training phase. In the testing phase, they use the whole deep network, whereas recalibrated every residual module with the survival probability (1−p). In this way, ResNet can be expended to over 1200 layers. Zagoruyko[8] introduced a ResNet variant with wider width and shallower depth, named WRN(Wide Residual Networks), which can improve ResNet’s performance further. Huang[14] presented DenseNet with layers connected to its all previous layers. With this kind of network design, it not only accomplishes feature reuse, but also alleviates the vanishing-gradient problem.

Attention mechanism has achieved many progresses in areas such as machine translation[24]. Recently attention mechanism is playing a significant role in various computer vision tasks. Harley[17]learned weights of pixels in multiple scales using attention mechanism, and calculating the weighted average value as the final result of segmentation. Chu[18]

We represent the input image as x0,output of the ith layer as xi and each convolutional module as function H. Since input to the ith layer is outputs of all previous layers. The formula is presented as follows:

where [x0,x1,…,xi−1] is the concatenation of outputs of all previous layers. DenseNet is composed of several dense blocks connected by transition layer. Normally, size of feature map decreased by 14 for each block. For example, size of feature map for the first block is h×w, then h2×w2 for the second block, h4×w4 for the third block. In DenseNet, number of output feature-maps for each convolution module are always the same, which is denoted by k. Thus the output number of the ith layer is (k0+(i−1)×k), where k0 is the number input to the first dense block. k was referenced as growth rate.

We introduce a method to sparsify DenseNet. The basic idea is dropping connections from middle layers and preserving only the farthest and nearest connections. The formula is as followings:

denotes number of connections we will preserve(We call it ‘path’). As DenseNet does, we also use bottleneck layer and compress the model in the transition layer, the hyperparameters are set the same as that of DenseNet.

Moreover, we also make a structure optimization. In DenseNet, layer number are the same for all dense blocks. However, in our SparseNet, the layer number in each block is increasing. We will talk about the advantages of this arrangement in section 4.6.

All our models include three sparse blocks. The layers within each sparse block are increasing. Besides bottleneck layer, all convolutional kernels are 3×3. blocks are connected with transition layer, which reduced feature map size by 14 and feature map number by 12

All networks are trained using stochastic gradient descent. The weight decay is 0.0001, Nesterov momentum is 0.9 without dampening. We initialize parameters as He

[27] does. All datasets are augmented with method introduced in Huang[14]

4.3 Classification Results on CIFAR and SVHN

The results in Fig.8 indicate that SparseNet utilizes parameters more efficiently than alternative models. SparseNet-abc-v1 achieves lower test error on CIFAR10 than pre-activation ResNet of 10001 layers, while latter has 10 times more parameters than the former one. For DenseNet-BC, the best model achieves 3.46%, while SparseNet achives lower test errror(3.40%) with ×2.6 less parameters. For the recent CondenseNet[30], which designed for mobile devices, Our SparseNet is still more parameter-efficient.

(floating-point operations) of pre-activation ResNet, DenseNet and SparseNet. Results are shown in Fig. 8. It shows SparseNet is more computation-efficient than the other two models. Compared to the best DenseNet Model, SparseNet is ×3.7 faster than DenseNet.

5.1 Where to drop connections

We also analyzed how networks’ layer, width and shortcut connections influence network’s performance. In our experiments, we set up three layers: 28(8 layers per block), 52 layers(16 layers per block) and 76 layers(24 layers per block). We set the range of growth rate(k) to be [6,26]. The parameters of all models are around 1M. So when we set the layer number and the growth rate, the number of connections(path) is also determined. The results are showed in Fig. 11. We can see that for each layer setup, all test errors are experiencing decreasing first and then increasing, resulting the optimal test error are always in the somewhere middle. For different layer setups, the lowest test error is within layers of 52, which is between 28 and 76. The results showed that none of the three factors shouldn’t be set to be extreme. Only by increasing layers, growth rate and path synchronously, can SparseNet achieve better performance.

In this work, we proposed a method to sparsify DenseNet. After reducing shortcut connections, we can expend the network to deeper and wider. Moreover, we also introduced an attention model, which can boost networks’ performance further. Experiments showed that compared to DenseNet, our model achieved comparable performance on datasets of CIFAR and SVHN with much less parameters and much lower computation. Besides, we analyzed several ways of reducing connections and how layers, growth rate and shortcut connections influence networks’ performance. In future work, we will apply our models to other computer vision tasks, for example object detection, object segmentation, human pose estimation and so on.