Given two data matrices X and Y, sparse canonical correlation analysis (SCCA) is to seek two sparse canonical vectors u and v to maximize the correlation between Xu and Yv. However, classical and sparse CCA models consider the contribution of all the samples of data matrices and thus cannot identify an underlying specific subset of samples. To this end, we propose a novel sparse weighted canonical correlation analysis (SWCCA), where weights are used for regularizing different samples. We solve the L_0-regularized SWCCA (L_0-SWCCA) using an alternating iterative algorithm. We apply L_0-SWCCA to synthetic data and real-world data to demonstrate its effectiveness and superiority compared to related methods. Lastly, we consider also SWCCA with different penalties like LASSO (Least absolute shrinkage and selection operator) and Group LASSO, and extend it for integrating more than three data matrices. 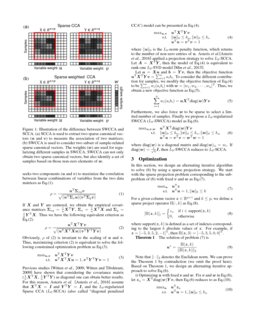 These existing sparse CCA models can find two sparse canonical vectors with a small subset of variables across all samples (Fig.1(a)). However, many real data such as the cancer genomic data show distinct heterogeneity [Dai et al.2015, Chen and Zhang2016]. Thus, the current CCA models fail to consider such heterogeneity and cannot directly identify a set of sample-specific correlated variables. To this end, we propose a novel Sparse weighted CCA (SWCCA) model, where weights are used for regularizing different samples with a typical penalty (e.g., LASSO and L0-norm) (Fig.1(b)). In this way, SWCCA can not only select two variable sets, but also select a sample set (Fig.1 (b)). We further adopt an efficient alternating iterative algorithm to solve L0 (or L1) regularized SWCCA model. We apply L0-SWCCA and related ones onto two simulated datasets and two real biological data to demonstrate its efficiency in capturing correlated variables across a subset of samples.

If X and Y are centered, we obtain the empirical covariance matrices Σxy=1nXTY, Σx=1nXTX and Σy=1nYTX. Thus we have the following equivalent criterion as Eq.(2).

Obviously, ρ of (2) is invariant to the scaling of u and v. Thus, maximizing criterion (2) is equivalent to solve the following constrained optimization problem as Eq.(3).

where ∥u∥0 is the L0-norm penalty function, which returns to the number of non-zero entries of u. Asteris et al.[Asteris et al.2016] applied a projection strategy to solve L0-SCCA. Let A=XTY, then the model of Eq.(4) is equivalent to rank-one L0-SVD model [Min et al.2015].

Furthermore, we also force w to be sparse to select a limited number of samples. Finally we propose a L0-regularized SWCCA (L0-SWCCA) model as Eq.(6).

In this section, we design an alternating iterative algorithm to solve (6) by using a sparse projection strategy. We start with the sparse projection problem corresponding to the sub-problem of (6) with fixed v and w as Eq.(7).

Theorem 1 The solution of problem (7) is

Note that ∥⋅∥2 denotes the Euclidean norm. We can prove the Theorem 1 by contradiction (we omit the proof here). Based on Theorem 1, we design an alternating iterative approach to solve Eq.(6).

Finally, combining (11), (13) and (16), we propose the following alternating iterative algorithm to solve problem (6) as Algorithm 1.

Terminating Condition: We can set different stop conditions to control the iterations. For example, the update length of u, v, and w are smaller than a given threshold (i.e., ∥uk−uk+1∥22<10−6, ∥vk−vk+1∥22<10−6 and ∥wk−wk+1∥22<10−6), or the maximum number of iterations is a given number (e.g., 1000), or the change of objective value is less than a give threshold.

, whose elements are randomly sampled from a standard normal distribution.

where the elements of ϵx and ϵy are randomly sampled from a standard normal distribution.

The true and estimated patterns for u, v and w in the synthetic data 1 are shown in Fig.2. Compared to PMD, L0-SWCCA and L0-SCCA does fairly well for identifying the local non-zero pattern of the underlying factors (i.e., u and v). However, the two traditional SCCA methods (L0-SCCA and PMD) do not recognize the difference between samples and remove the noisy samples. Interestingly, L0-SWCCA not only discovers the true patterns for u, v (Fig.2(b) and (g)), but also identifies the true non-zero characteristics of samples (w) (Fig.2(e)). Furthermore, to assess our approach is indeed able to find a greater correlation level between two input matrices, we define the correlation criterion as Eq.(19).

where cor(⋅) is a function to calculate the correlation coefficient of the two vectors. For comparison, we set w=[1,⋯,1]T for L0-SCCA and PMD to compute the correlation criterion. L0-SWCCA gets the largest ρ=0.96 compared to L0-SCCA with ρ=0.80 and PMD with ρ=0.87 in the above synthetic data. All results show that L0-SWCCA is more effective to capture the latent patterns of canonical vectors than other methods.

Step 2: We then update two sub-matrices in the X and Y.

Step 3: We add the Gaussian noise in X and Y.

The true and estimated patterns for u, v and w are shown in Fig.3. L0-SWCCA and L0-SCCA are superior to PMD about identifying the latent patterns of canonical vectors u and v (Fig.3(b), (c), (d), (g), (h) and (i)). However L0-SCCA and PMD fail to remove interference samples. Compared to L0-SCCA and PMD, L0-SWCCA can clearly identify the true non-zero characteristics of samples (Fig.3(e)). Similarly, we also compute the correlation criterion based on the formula (19). We find that L0-SWCCA gets the largest correlation ρ=0.97 compared to L0-SCCA with ρ=0.93 and PMD with ρ=0.95. All results show that our method is more effective to capture the latent patterns of canonical vectors than other ones.

We first consider a breast cancer dataset [Witten et al.2009, Chin et al.2006] consisting of gene expression and DNA copy number variation data across 89 cancer samples. Specifically, the gene expression data X and the DNA copy number data Y are of size n×p and n×q with n=89, p=19672 and q=2149. We apply SWCCA and related ones to this data to identify a gene set whose expression is strongly correlated with copy number changes of some genomic regions.

In PMD [Witten et al.2009], we set c1=c√p and c2=c√q, where c∈(0,1) is to approximately control the sparse ratio of canonical vectors. We ensure that the canonical vectors (u and v) extracted by the three methods (PMD, L0-SCCA, and L0-SWCCA) have the same sparsity level for comparison. We first apply PMD in the breast cancer data to obtain two sparse canonical vectors u and v for each given c∈(0,1). Then, we compute the number of nonzero elements in the above extracted u and v, denoted as Nu and Nv. Finally, we set ku=Nu, kv=Nv in L0-SCCA and L0-SWCCA, and set kw=53≈0.6×89 in L0-SWCCA to identify the sample loading w with sparse ratio 60%.

We adopt two criteria: correlation level defined in formula (19) and objective value defined in Eq.(5) for comparison. Here we consider different c values (i.e., 0.1,0.2,0.3,0.4,0.5,0.6,0.7) to control the different sparse ratio of canonical vectors. We find that, compared to PMD and L0-SCCA, L0-SWCCA does obtain higher correlation level and objective value for all cases (Table 1). Since the ‘breast cancer data’ did not collect any clinical information of patients, it is very difficult to study the specific characteristics of these selected samples. To this end, we also apply our method to another biological data with more detailed clinical information.

Similarly, L0-SWCCA obtains the largest correlation level (CL) and objective value (OV) than others ones [(CL, OV): (0.98, 1210) for L0-SWCCA, (0.84, 346) for PMD, (0.86,469) for L0-SCCA], respectively. More importantly, we also analyze characteristics of these selected patients by L0-SWCCA. We find that it is significantly different with respect to patient survival time between the selected 203 patients and the remaining 202 patients with p-value =0.023 (Fig.4). These results imply that L0-SWCCA can be used to discover BLCA subtype-specific miNRA-gene co-correlation modules.

We first consider a general regularized SWCCA framework as Eq.(23).

where Ru(⋅), Rv(⋅), Rw(⋅) are three regularized functions. For different prior knowledge, we can use different sparsity inducing penalties.

where z=XTdiag(w)Yv. We first replace the constraint uTu=1 with uTu≤1 and obtain the following the problem as Eq.(25).

Thus, we can use a coordinate descent method to minimize Eq.(26) and obtain the following update rule of u as Eq.(27).

where Sλu(⋅) is a soft thresholding operator and Sλu(zi)=sign(|zi|−λu)+. Based on the above, an alternating iterative strategy can be used to solve L1-SWCCA.

Thus, we obtain its Lagrangian form as Eq.(29).

By cyclically applying the above updates, we can minimize Eq.(29). Thus, an alternating iterative strategy can be used to solve L2,1-SWCCA.

In this paper, we propose a sparse weighted CCA framework. Compared to SCCA, SWCCA can reveal that the selected variables are only strongly related to a subset of samples. We develop an efficient alternating iterative algorithm to solve the L0-regularized SWCCA. Our tests using both simulation and biological data show that SWCCA can obtain more reasonable patterns compared to the typical SCCA. Moreover, the key idea of SWCCA is easy to be adapted by other penalties like LASSO and Group LASSO. Lastly, we extend SWCCA to MSWCCA for multi-view situation with multiple data matrices.

Shihua Zhang and Juan Liu are the corresponding authors of this paper. Wenwen Min would like to thank the support of National Center for Mathematics and Interdisciplinary Sciences, Academy of Mathematics and Systems Science, CAS during his visit.